The concrete alleyways leading to Zahia Abu-Armeilah’s house in the Palestinian part of Abu Tor are too narrow for any greenery. But ascend to the rooftop of her East Jerusalem home and you will find yourself in a veritable Garden of Eden, brimming with plants and young fruit trees and literally buzzing with the sounds of hundreds of bees.

It was by chance two years ago that Abu-Armeilah, 51, saw a Facebook post from Muslala, a West Jerusalem not-for-profit organization that combines art, social activism and sustainability. The group had built an oasis on the roof of the Clal building in a blighted commercial center near Jerusalem’s Mahane Yehuda market, featuring everything from beehives to agriculture.

The post included contact details for Sinsila — agricultural terrace in Arabic — a new organization trying to establish something similar for Palestinians.

After initially thinking it was “majnun,” or crazy, to keep bees at home, Abu-Armeilah enrolled in Sinsila’s first beekeeping course and went on to complete additional courses there in roof-top gardening, sustainability and hydroponics, the art of growing plants without soil. Once a stay-at-home mom, she now teaches environmental science to third to sixth-grade boys at a school in the East Jerusalem neighborhood of A-Tur. It is the first job she’s ever had.

“Self-confidence,” she says, when asked what the experience has given her, “and a beautiful space in which the family can sit and also entertain. The garden is my baby. I’m so happy when I’m here.”

Previously, the roof was barren, used just for storage. 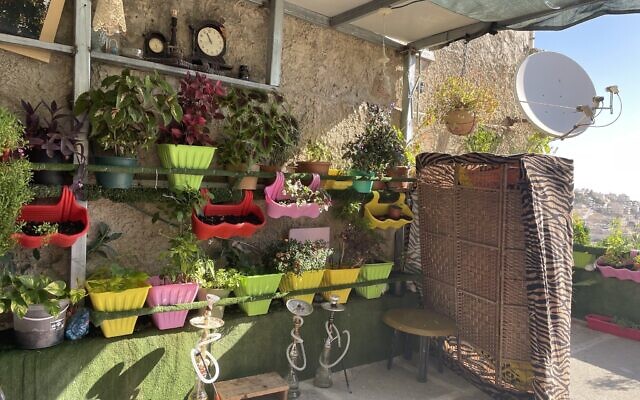 With the beehive that Sinsila helped her to build, Abu-Armeilah provides honey for the family and friends. Eventually, she hopes, she’ll be able to start selling it to supplement the family income.

The hive needs little attention, she explained, as the bees mostly look after themselves, “but I visit them every day,” she chuckled.

When a wasp flew in, she enthusiastically showed this reporter how the bees rallied to defend the hive and drive the intruder off. Later, she pointed out the yellow pollen tucked into sacs on the legs of bees who had returned after foraging.

During the coronavirus lockdowns, Abu-Armeilah’s husband, who originally pooh-poohed the bee idea, got busy building shelves for the planters that now hold everything from ornamental plants to chili peppers, eggplant, tomatoes, and even lemon and mandarin trees. Fruit and vegetable remains go into a vermicomposter, which uses worms to create high-quality compost. 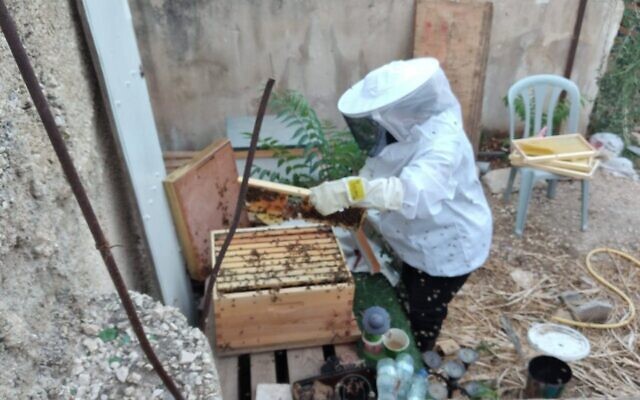 “Now my husband is very happy,” Abu-Armeilah said. “He sits here in the evenings enjoying the great air.” Her son, 26, who still lives at home because he has not yet married, brings his friends onto the roof to smoke nargila (water pipe). The bees, who are more interested in the plants, tend to leave the guests alone.

Abu-Armeilah is one of dozens of Palestinian women in East Jerusalem who, thanks to Sinsila, are raising bees for honey and growing vegetables on their roofs, saving money on groceries and even making some extra income.

The brainchild behind the project is architect Tariq Nassar, who in just two years has turned a top floor and two large balconies at a municipal library in East Jerusalem’s Wadi Joz neighborhood into a school for beekeeping, rooftop gardening and urban farming in which 95 women have completed courses. 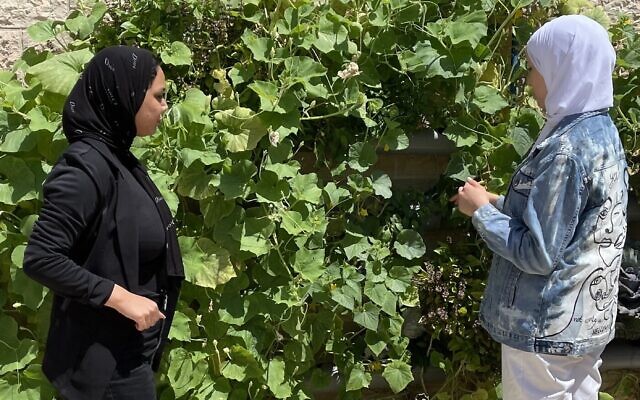 Architect and Sinsila staff member Hanan (right) shows an architecture student from the Bezalel Academy of Art at Hebrew University how cucumbers are grown hydroponically on Sinsila’s roof, September 6, 2021. (Sue Surkes/Times of Israel)

One balcony houses a large beehive and vermicomposter. The other is full of wooden planters alive with flowers and herbs, supported by various hydroponic systems for growing vegetables with fertilized water.

In August, the not-for-profit organization held a rooftop festival at the library and launched a women’s cooperative featuring an onsite cafe and a sales point for honey and beeswax products.

September saw the installation of a green wall, a vertical structure integrating irrigation that is covered by plants.

Several women have turned their beekeeping into a business and three, including Abu-Armeilah, are teaching sustainability in East Jerusalem schools. The group also connects graduates with catering gigs. Earlier this month, for example, they provided refreshments at the planting of a community orchard below the Hand in Hand Jewish-Arab school in the south of the city. 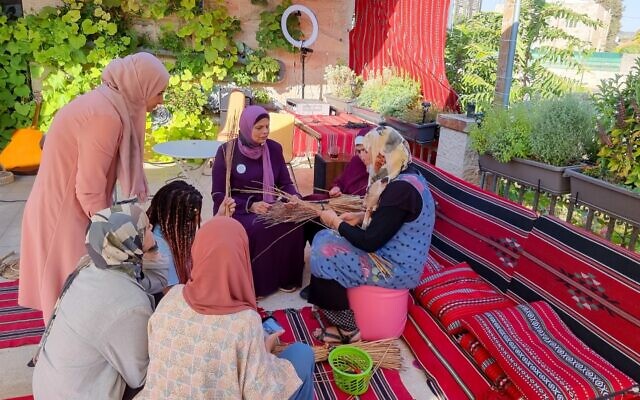 Nassar is currently trying to get a green light to transform a dilapidated garden that the library already had into a nursery for orchard trees. Elsewhere, he has designed a roof-top garden to be farmed by Palestinian youth at risk, plans to open a Sinsila branch next year in a new municipal building in Abu Tor, and is bringing green roof experts together with city employees to bring life to the roofs of six public buildings — community centers and schools.

The youngest of 10 children raised in a conservative Muslim family, Nassar, 37, grew up in the Ras el-Amud neighborhood of East Jerusalem and attended what he called “a very poor school” in the Old City. 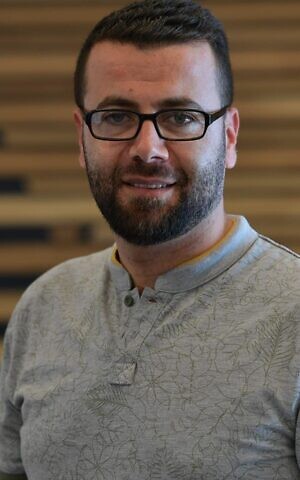 But he shone academically and went on to study architecture at Bir Zeit University in the West Bank, to work in the US and with the United Nations Relief and Works Agency in Jordan, and to complete a dual master’s degree in integrated urbanization and sustainable design at Stuttgart University in Germany.

Eventually, he grew to realize that design was more than plans on paper; it was also about wider issues of culture and society.

“I thought about how to develop neighborhoods in a sustainable way. But for that you have to work with local people. Everything is integrated,” he said.

After returning to Jerusalem in 2015, Nassar married, became a father of two children and worked in Jerusalem and elsewhere on placemaking. This galvanizes local communities to decide together how to make the most of open public spaces where they live.

While he grew up hating Jews, it was not until he was 17 that he actually spoke to one, on a flight to the US to visit one of his brothers. “The guy on the plane was nice and I began to ask myself questions,” he recalled. “A lot changed from that point on.”

During a tour for community activists from all over Jerusalem, Nassar met Matan Israeli, an artist and co-founder of Muslala.

“Roofs had been in my head all the time,” Nassar said, given the lack of vacant spaces at ground level in East Jerusalem. He also understood that Palestinian women in East Jerusalem — most of whom do not work for social and cultural reasons — were the dominant force in the home and therefore the perfect partners with whom to green the city’s roofs, so long as he could frame their involvement as an economic opportunity to earn some income.

Through Israeli, Nassar met biodynamic beekeeping expert Yossi Aud, who was looking to run a beekeeping course for women in East Jerusalem.

Nassar secured a classroom at the Wadi Joz library, designed a flyer and sent it out to Palestinian community centers. Within two weeks, 100 women applied. 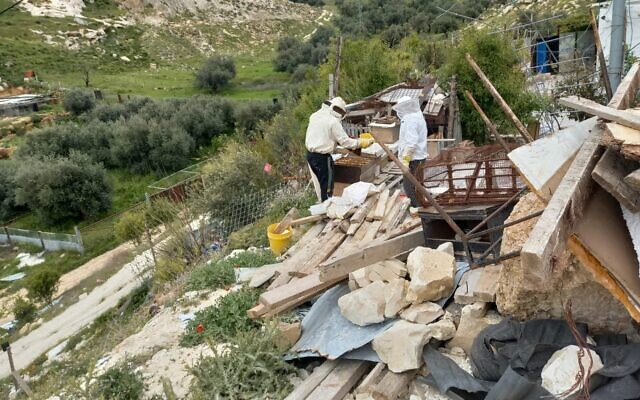 Tending to the bees in the East Jerusalem neighborhood of Jabel Mukaber. (Courtesy, Sinsila)

Hurriedly scraping together some donations, Nassar launched the first three-month course for 15 women in April 2019. This was followed with six months of on-site supervision in each participant’s home. He only offers courses for women and is assisted by women.

“Yossi, Matan and I spent that July driving around East Jerusalem delivering hives,” said Nassar, who until recently was Sinsila’s only salaried employee. 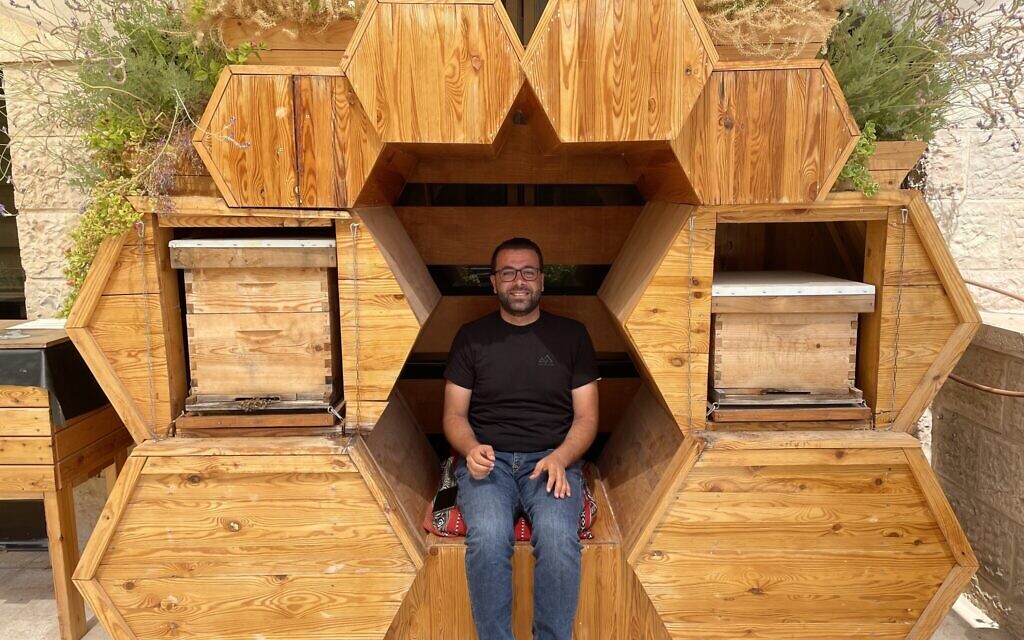 He has now found the funds to employ two full-time staff — Hanan, an architect, and Hashem, an East Jerusalemite with a degree in environmental studies from Ben Gurion University in southern Israel.

“The young generation [of Palestinians] has no hope and that is dangerous,” Nassar said. “We need hope, but combined with action. Sinsila is helping to give hope and that is transformative.”