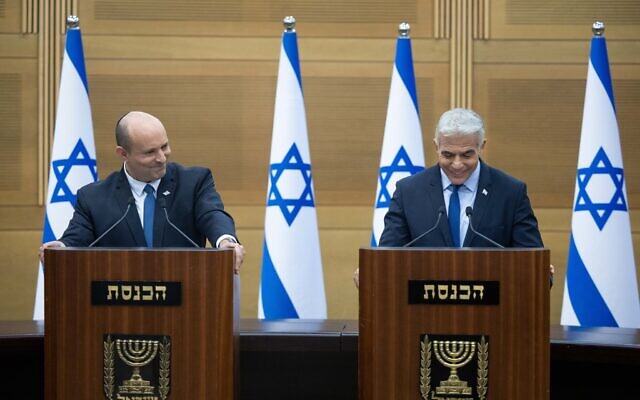 Prime Minister Naftali Bennett and Foreign Minister Yair Lapid announce the collapse of their coalition, at a joint appearance at the Knesset, June 20, 2022. (Yonatan Sindel/Flash90)

The coalition on Tuesday pushed up its timeline for the Knesset’s disbandment and new elections, adding its dispersal bill to Wednesday’s legislative agenda.

The Knesset Presidium approved the addition, and the Knesset House Committee granted the bill an exemption from the traditional 45-day waiting period between submission and an initial vote.

The earliest the Knesset can disband is Wednesday, although a more likely scenario would be Monday of next week, as the legislation must pass four plenum votes and two committee reviews.

If it proceeds as planned, Foreign Minister Yair Lapid will take over as prime minister next week, possibly on Tuesday, and will hold the post through elections in the fall and until the formation of Israel’s next coalition government.

“We hope that within a week we will complete the process,” Welfare Minister Cohen told Kan Radio. “The intention is to finish it as soon as possible and to go to elections.”

On Monday evening, Prime Minister Naftali Bennett and Lapid surprised the nation — and many of their own coalition members — by announcing their intention to voluntarily disband their own government and send the country back to its fifth election since 2019, likely in late October or early November.

They said they did so after coming to a conclusion that there was no way to maintain the current government.

Once the Knesset’s disbandment is finalized, Lapid will assume the premiership and Bennett will rotate to alternate prime minister, a title that Lapid currently holds. Although the Knesset will largely cease to legislate, the government will remain in place until a new one is sworn in, post elections.

The two leaders initially said that they planned to bring a bill to disperse the Knesset to a vote next week, but following opposition efforts to bring their own bill forward on Wednesday, the coalition expedited its timeline. 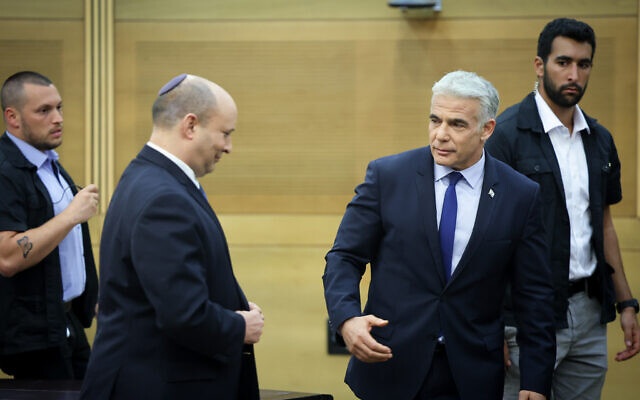 A source close to Likud faction chair Yariv Levin confirmed that his party will file its own dispersal bill on Wednesday.

Procedurally, only private bills can be brought to the Knesset floor on Wednesdays. This means that both the Likud’s and the coalition’s bills would need to pass four readings on their way to becoming law: preliminary, first, second and third. Government bills do not need a preliminary vote and only need to pass three hurdles.

Between the preliminary and first readings, as well as between the first and last two, the bill needs to be sent to the Knesset’s House Committee for revisions. The coalition can endeavor to rush it through committee process on Wednesday and return it for its second vote later that day. If so, it would enable the coalition to breeze dissolution through its committee and final readings by Monday.

If not, the process can drag out until the end of next week, or longer.

Technically, the coalition could rush the bill completely through on Wednesday, but this is not expected because of the need to adhere to committee and voting procedures. Without full opposition support for the coalition’s version of the bill, the coalition cannot bypass committee procedure and can be filibustered during votes.

While both the government and opposition envision an end to the current government, the current struggle is over whose hand will fell it and under what conditions. 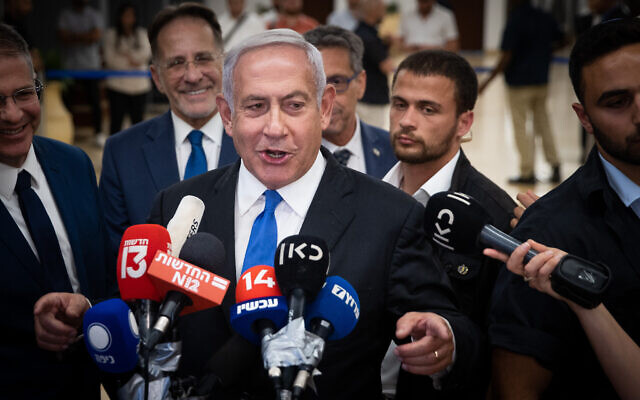 Opposition leader Benjamin Netanyahu hails the collapse of the Bennett-Lapid coalition, at the Knesset in Jerusalem on June 20, 2022. (Yonatan Sindel/Flash90)

The opposition may try to outflank the coalition by creating a new right-wing coalition from within the existing Knesset, obviating the need for elections. This could be done by submitting a constructive no-confidence motion to swap the current government with an alternative proposed slate. If approved by 61 MKs, the alternate government automatically takes over. Such a motion can be attached to a private bill on Wednesday, or be presented as a standalone agenda item on Monday.

This would block Lapid from assuming the role of interim premier, a role that could conceivably last for many months until a new government is formed after elections, or even longer if the elections prove inconclusive and a government can’t be formed. Such a scenario saw Benjamin Netanyahu remain premier for a lengthy period after his government fell.

While certain elements of the opposition and part of the coalition’s right-wing members prefer the option of reshuffling the current Knesset, the Likud-led opposition has had trouble assembling a minimum of 61 MKs agreeing to sit under its leader, former prime minister Netanyahu.

A coalition attempt to attach a separate bill to the dissolution bill barring indicted politicians from forming a government — widely viewed as a personal bill against Netanyahu — was denied by the Knesset Presidium.