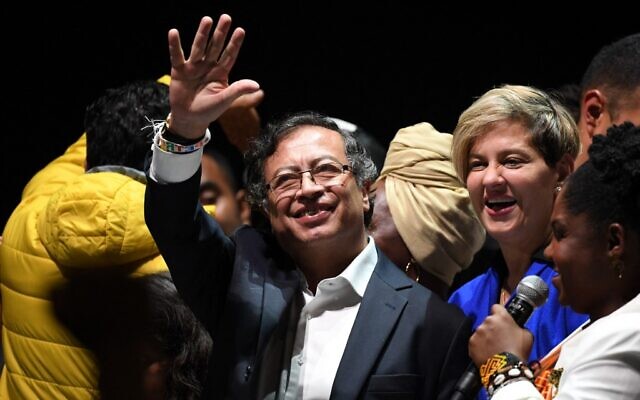 Newly elected Colombian President Gustavo Petro (C) celebrates next to his wife Veronica Alcocer and his running mate Francia Marquez at the Movistar Arena in Bogota, on June 19, 2022 after winning the presidential runoff election on June 19, 2022 (Daniel MUNOZ / AFP)

Colombia’s warming ties with Israel seem set to take a significant hit with the presidential election victory of leftist former rebel Gustavo Petro, an outspoken critic of Israel who has compared treatment of the Palestinians to the “discrimination” suffered by Jews at the hands of the Nazis.

Petro had also been a vocal opponent of the 2017 United States decision to recognize Jerusalem as Israel’s capital, and accused the Israel Defense Forces of carrying out a “massacre” against Gazans during violent border protests against the US embassy transfer in May 2018.

According to a 2014 article in Colombia’s El Tiempo (in Spanish), Israel’s embassy in Bogota publicly rebuked Petro, then mayor of the capital, for publishing false pictures that he claimed were of Gazans killed by Israel during the month-and-a-half-long war between the IDF and the Hamas terror group that year in the Gaza Strip.

“False and manipulated images of what is supposedly happening in the Gaza Strip,” the embassy said, according to the report, adding that “most of these images are old and come from the internal conflict in Syria.”

Separately, Petro tweeted a photo of an anti-Israel protest in Great Britain in July 2014, captioning it “London against the barbarism.” 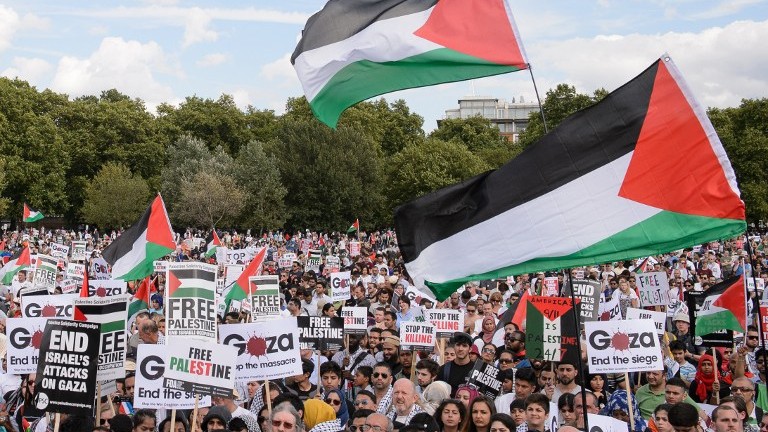 Petro has also said he is willing to resume diplomatic relations with Venezuela, halted in 2019, which could also prove a sticking point with Israel as Venezuela is a key ally of Iran.

“We congratulate the People of Colombia and President Elect Petro Gustavo on a successful democratic election and look forward to further strengthening the relations between Israel and Colombia and between our two peoples,” the tweet read.

Petro’s predecessor Colombian President Iván Duque had advanced ties with Israel throughout his term, visiting Israel in November to open a trade and innovation office in Jerusalem, a move that was seen as deepening already close ties between Israel and a key ally in South America.

He met with Prime Minister Naftali Bennett in Jerusalem, where the two leaders discussed the Iran threat, among other regional challenges. Bennett thanked Duque for adding Hezbollah and the Iranian Revolutionary Guards Corps to Colombia’s list of terrorist organizations. 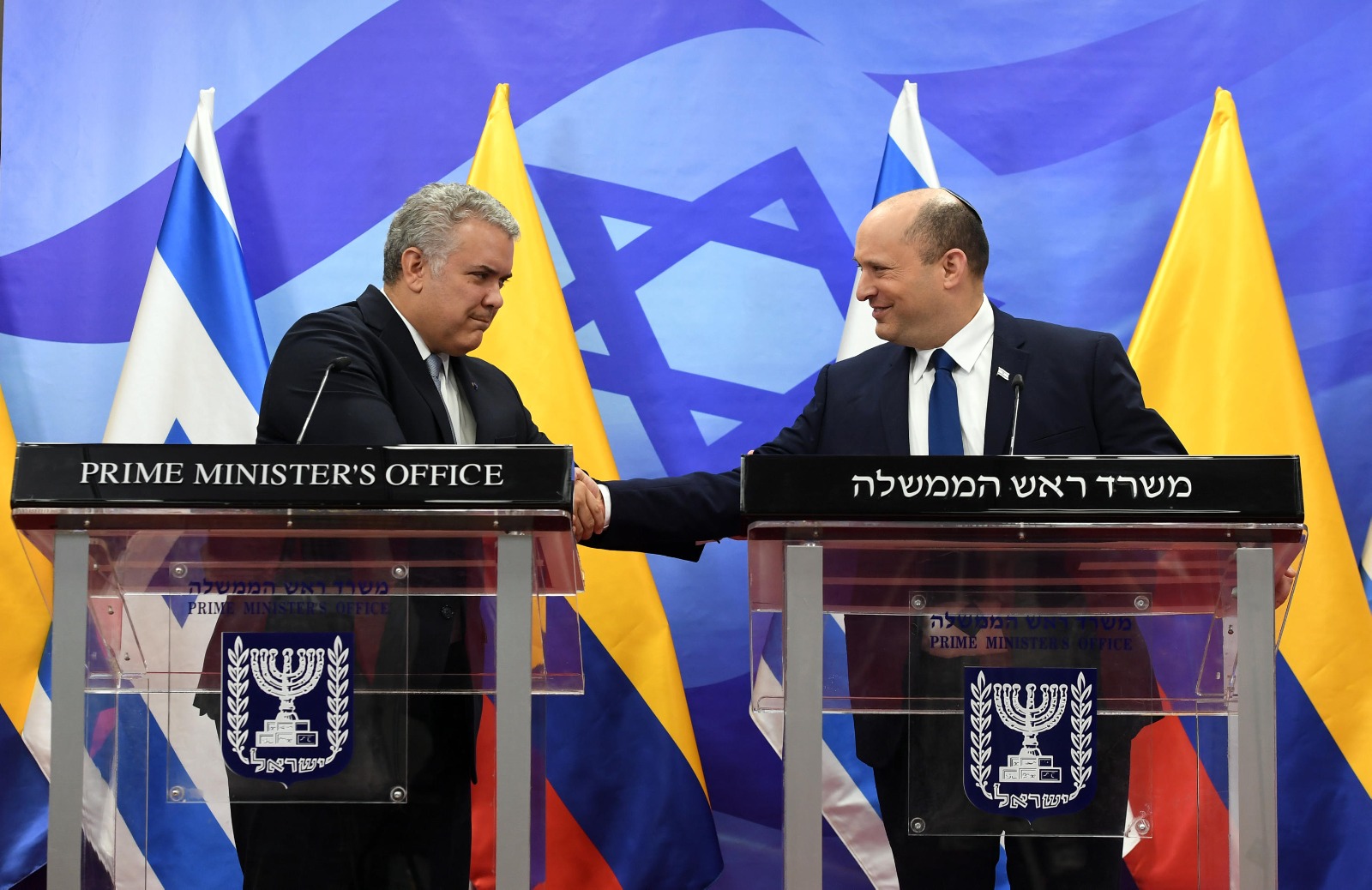 At a state dinner hosted by President Isaac Herzog, Duque declared, “Colombia is Israel’s number one ally in Latin America.”

Petro was once a rebel with the now-defunct M-19 movement and was granted amnesty after being jailed for his involvement with the group.

Sunday’s victory was his third attempt to win the presidency, earning 50.48% of the votes, according to results released by election authorities. Petro, 62, will be officially declared winner after a formal count that will take a few days. Historically, the preliminary results have agreed with the final ones.

He has proposed ambitious pension, tax, health and agricultural reforms and changes to how Colombia fights drug cartels and other armed groups. 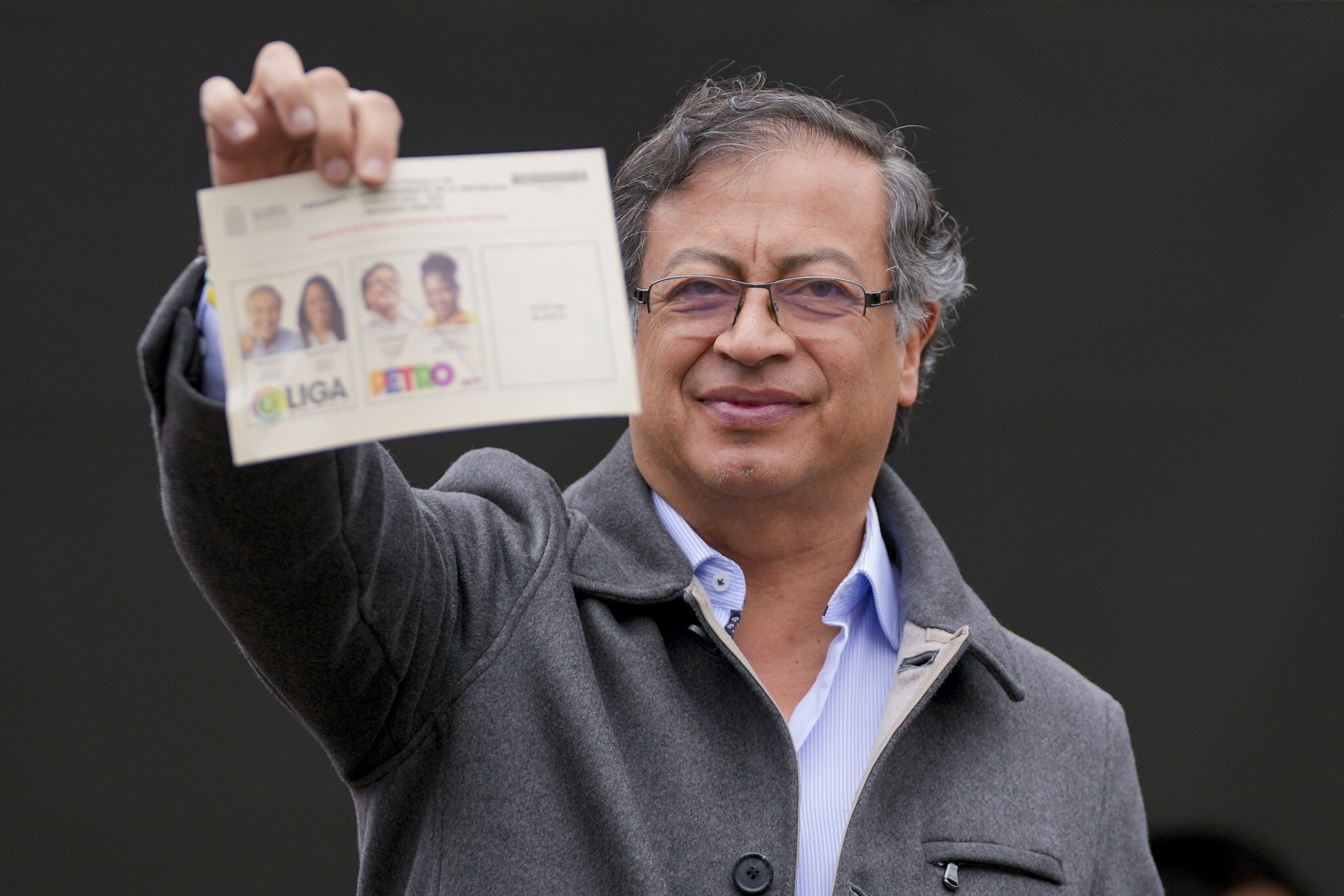 The election came as Colombians struggle with rising inequality, inflation and violence — factors that led voters in the election’s first round last month to punish long-governing centrist and right-leaning politicians and pick two outsiders for the runoff contest.

But the results were an immediate reason to fret for some voters whose closest reference to a leftist government is the troubled neighboring Venezuela. Petro also wants to make changes to Colombia’s relations with the US by seeking a renegotiation of a free trade agreement and new ways to fight drug trafficking.