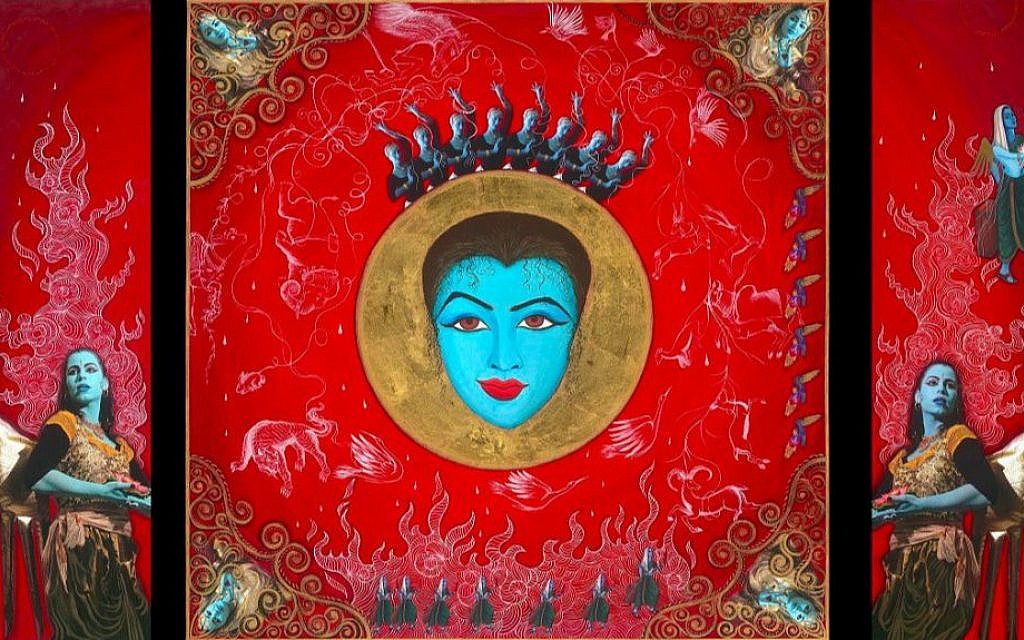 'Lilith Lair Triptich' by Siona Benjamin, who painted faces in blue to mirror the displacement she has felt as a brown-skinned Indian Jew in her mostly white town in New Jersey (Courtesy: Siona Benjamin and Flomenhaft Gallery)

For many, Jewish contemporary art is a bit of a misnomer while others say it never gets the attention it deserves. Both schools of thought are proven wrong at this year’s Jerusalem Biennale.

Hosting nearly 200 artists from Israel and abroad, both Jewish and non-Jewish, in 13 exhibitions and 10 venues, this second Biennale — running from September 24 through November 5 — offers an opportunity to give contemporary Jewish art a home, even if it’s only temporary, said Dov Abramson, one of the presenting artists and a member of the Biennale board.

The Biennale changes all that, albeit on a temporary basis. With exhibits on display for six weeks (one NIS 45 ticket grants access to all Biennale exhibitions), and guided tours set through the intermediate days of Sukkot (events can be reserved online and then individually arranged after October 30), the event allows viewers to meet artists, seeing their works from a different perspective.

The Tower of David Museum is hosting the main exhibition, “Jerusalem.Passages,” with its ancient rooms currently home to five, large-scale projects by five leading Israeli and international artists. 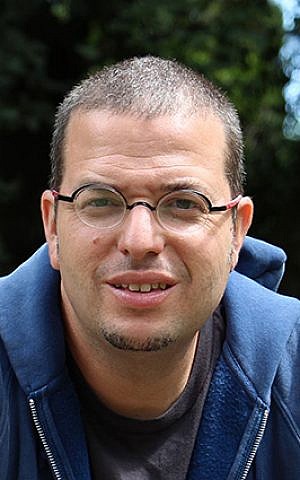 One of the artists presenting in the Tower of David is Abramson, with his new piece, “Kav70″ or “Line 70,” a play on the common term used for local bus routes. For Abramson, a nearly lifelong Jerusalemite (his American parents made aliyah when he was 7), the piece is his opportunity to take a long, hard look at his city.

A lover of series, maps and numbers, Abramson said he was thinking about the Jewish midrash — a kind of long, narrative form of rabbinic literature — that accords 70 different names to Jerusalem.

He divided Jerusalem into a grid, mapping its 70 names according to his own intepretations.

“It was tongue in cheek,” said Abramson. “Jerusalem and its borders are very fuzzy in our society and culture, and to find the real borders of Jerusalem requires real exploration.”

After dividing his map into those 70 cells, Abramson set out in the early morning hours for about six months, heading to different neighborhoods to photograph images that represented each cell. Back at his studio, he took each photo and turned it into a linear form, later naming it with one of the 70 explanatory names of the city.

“It makes for an interesting connection,” he said.

And so, the photograph of a water fountain on Mount Herzl looks something like a bellybutton when drawn, and became “The Navel of the Country.”

The lines of Braille-like circles that dot a bus stop bench in Kiryat Hayovel are“Seat of God,” and the smart card slot of a still-standing public phone in the city’s downtown is titled “House of Prayer.”

‘House of Prayer’, one of Dov Abramson’s 70 linear images for the city of Jerusalem (Courtesy: Dov Abramson)

The piece, which is hung in the Tower of David Museum, includes the map with a legend of thumbnail prints, detailing each cell’s image and name.

“I’m saying that these are the names and these are the cells, and I put them together,” said Abramson. “It’s a study informed in Jerusalem and the Jewish part of it is the names.”

For local artists like Abramson, who, by chance, worked as a costumed Roman soldier at the Tower of David while he was a student at Bezalel, and later on as a guide, the Biennale offers a meaningful opportunity to now present as an artist.

That’s the idea, said Rami Ozeri, the founder of the Biennale who also studied at Bezalel after first working as an economist.

“This year, our second Biennale, is another world because now there are expectations,” said Ozeri. “The numbers are bigger, because 2013 allowed us to reach very wide audiences in terms of artists.”

In the Biennale’s first year, 50 of the 60 artists with exhibits at the event were Israeli. Now there are nearly 200, and 50% are from abroad.

“It’s not just Israeli anymore,” said Ozeri. “That turns Jerusalem into a center of contemporary Jewish art. Artists are bringing their art to here.”

Some of the works are also being showcased in two exhibits in the Van Leer Research Institute’s Polonsky Building.

“It Has Always Been the Book” includes the works of 22 Jewish and non-Jewish Argentinean artists, referring to the 22 letters of the Hebrew alphabet and focusing on the transition from books to digital media, from paper to screen and from ink and paint to pixels. 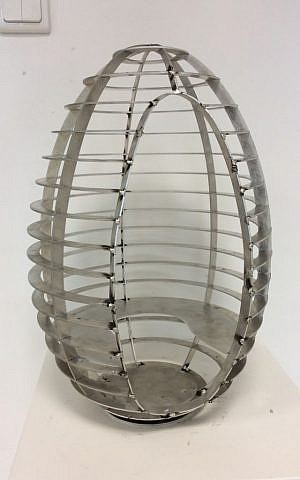 “New York, New Work: Contemporary Jewish Art from NYC,” is also in the Polonsky buildng, and features works by members of the Jewish Art Salon, a New York-based community of artists and scholars who have transformed their New York Diaspora with a steady infusion of Jewish identity in artwork. The exhibit is curated by David Sperber from Bar-Ilan University, and Dvora Liss, a curator at the Ein Harod Museum of Art.

“We started looking at the scene, and saw that the these artists are regular American artists who would use certain Jewish sources,” said Liss. “Economically, it wasn’t a good idea for them. It’s not politically correct, because Jewish art has that negative connotation, but they went for it.”

The group includes older artists, like Archie Rand, an abstract expressionist who “went crazy” with Jewish themes in the 1970s, and Helen Aylon, a “grande dame of eco-feminism,” who found God and Judaism in the 1990s and has been exploring her Jewish roots ever since, said Liss.

The younger artists include Eli Valley, a caricaturist who looks at the relationship between Israelis and Diaspora Jews, and Aaron Wiener, who rips apart public advertising boards, and treating them like an archaeological dig, turns them into collages of Torah scenes that he terms “Bible Ad Infinitum.”

“They’re artists who see the holy and the mundane together, it’s comics and figurative and conceptual,” said Liss. “We couldn’t limit it to just one kind of art.”

Over in the Achim Hasid complex, the two Templar-era buildings on Emek Refaim Street, are three different exhibitions, including “7,767mi,” by the members of the LA-based Jewish Artists Initiative (JAI), which explores the physical, spiritual and cultural ties that bind Jerusalem and Los Angeles, despite their separation of 7,567 miles. 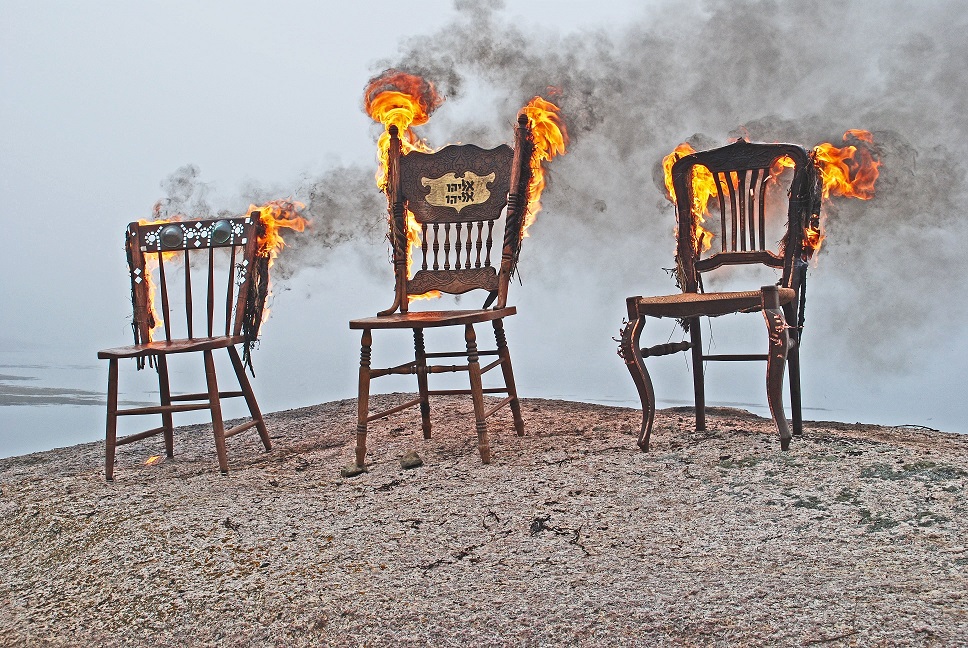 ‘Elijah, Elijah’ by Lilach Schrag, one of the pieces in ‘A Fine Line’ at the Achim Hasid complex (Courtesy: Lilach Schrag)

The other venues include the: Hechal Shlomo Museum for “Ima Iyla’a: The Art of Motherhood”; Skirball Museum at Hebrew Union College for “Transparent-Opaque”; Global Heritage Center for North African Jews for “Bezalel: In&Out”; and “Women of the Book” at the First Station. Kol HaOt, an educational, Jewish interactive experience, is running a three-day festival of Tanach and Art at the First Station, as part of the “Women of the Book” exhibit.

There are English and Hebrew guided tours throughout Sukkot, all of which require pre-registration. The Alana Ruben Free performance of “Present=Presence” is on September 30, and October 1 and 2.