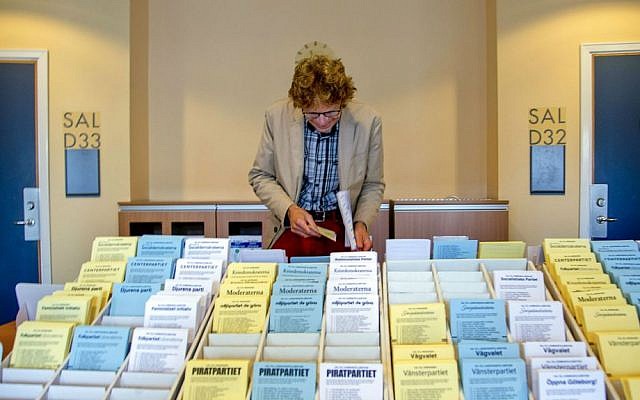 A man chooses among the ballot papers at a polling station in Goteborg during the Swedish general elections Sunday, Sept. 14, 2014. (photo credit: AP/Adam Ihse)

STOCKHOLM (AP) — Sweden’s Social Democrats were poised to return to power as the leaders of a left-leaning bloc that defeated the center-right government in a parliamentary election on Sunday, but without an absolute majority, an exit poll and partial official results showed.

If the result stands, an era of tax cuts and pro-market policies under 49-year-old Prime Minister Fredrik Reinfeldt is likely over in Sweden. Many Swedes are worried the tax cuts have undermined the country’s famed welfare system.

The so-called Red-Green bloc appeared unable to muster a majority in Parliament, leaving an anti-immigration group with the balance of power in a country known for its generous welcome to refugees fleeing war and poverty.

An exit poll by public broadcaster SVT gave the Red-Green bloc 44.8 percent of the votes, compared to 39.7 percent for the center-right Alliance that’s been in power for the past eight years.

With more than 80 percent of districts counted, official preliminary results pointed in the same direction.

A complicated parliamentary situation looms if the result is confirmed.

Social Democrat leader Stefan Lofven, 57, is expected to enter coalition talks with its main partner in the Red-Green bloc, the environmentalist Green Party, and potentially also the ex-communist Left Party.

But even with the added support of a small feminist party, which the exit poll showed balancing on the 4 percent threshold to enter Parliament, he wouldn’t get a majority.

Unless he’s able to recruit one of the center-right parties in the Alliance, which appears unlikely, Lofven could face a situation where the anti-immigration Sweden Democrats and the Alliance jointly strike down key proposals.

The once radical far-right party, which entered Parliament with 5.7 percent four years ago, had almost 10.5 percent in the exit poll and more than 12 percent in the partial results.

Despite the gains, the Sweden Democrats are unlikely to attain their main goal of sharply reducing immigration because all other parties are in favor of a liberal asylum policy.

This year, Sweden expects up to 80,000 asylum-seekers from Syria, Eritrea, Somalia, Afghanistan, Iraq and other countries — the highest number since 1992.

The rise of the Sweden Democrats has unnerved many Swedes, who regard the party as racist despite its efforts to soften its rhetoric under Akesson.

Smaller, more extreme groups are also trying to advance their positions in Sweden, including a neo-Nazi group that police said entered a handful of polling stations in Stockholm on Sunday, allegedly intimidating voters by filming them, shouting slogans and spreading confetti with political messages.

The group confirmed on its website that its activists had entered polling stations after burning ballots and an Israeli flag at a rally in downtown Stockholm.

Reinfeldt, who took office in 2006, is the longest-serving conservative leader in Swedish history. His center-right Alliance has cut income and corporate taxes, abolished a tax on wealth and trimmed welfare benefits. It has also eased labor laws and privatized state-owned companies, including the maker of Absolut vodka.

Meanwhile, the gap between rich and poor has grown faster in Sweden than in most developed countries, though it remains among the world’s most egalitarian, according to the Organization for Economic Cooperation and Development.

“I hope that there will be a change,” said Jonathan Andersson, a 25-year-old chef in Stockholm who blamed the government for his problems finding a “proper” job. “They changed the employment law and now I just get temporary work.”

Martin Holmen, a volunteer campaign worker for Reinfeldt’s Moderate Party, said many voters didn’t give the government enough credit for making Sweden’s economy one of the strongest in Europe.

“We have had the deepest economic crisis since the 1930s. But people in Sweden have hardly noticed it,” Holmen said. “That’s a very good grade for the Alliance.”