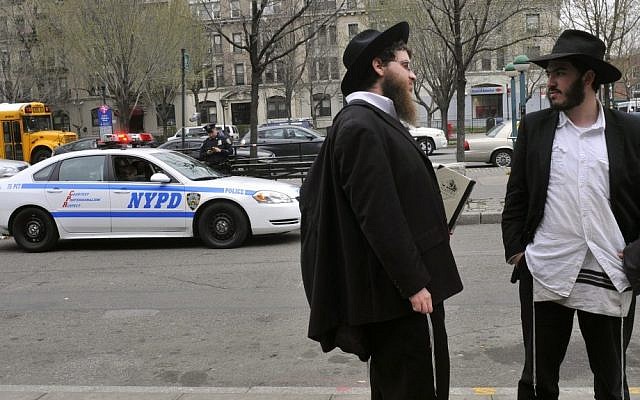 A Brooklyn man accused of punching an Orthodox Jewish man and knocking the cellphone from his hand was arrested Wednesday.

Christian Rojas, 36, allegedly assaulted the Jewish man, who was on his way to synagogue in the Crown Heights section of Brooklyn, early Wednesday morning, WABC News reported. The assault took place just hours after the Tuesday night stabbing of an Orthodox man — an off-duty volunteer with Hatzolah, a Jewish emergency services provider — in the neighborhood.

Police do not believe the attacks are related but are investigating both incidents as possible hate crimes. A $10,000 reward — funded equally by the Anti-Defamation League and Crown Heights Community Council — is being offered for information on the stabbing attack, CBS Local reported.

Rojas is being charged with assault as a hate crime, aggravated harassment as a hate crime and assault, according to the New York TV news program. The police said Rojas told the 49-year-old victim that he was “tired of Jews.”

Neither victim suffered serious injuries. The Hatzolah worker was identified by the New York Post as David Katz, 34.

Crown Heights, home to the world headquarters of the Chabad-Lubavitch movement of Hasidic Judaism, has a large Orthodox Jewish population and sizable African-American and Caribbean-American populations. The neighborhood was rocked by major riots in 1991 after an African-American child died after being hit by a car in the Lubavitcher rebbe’s convoy. In recent years, the neighborhood has also attracted many young, middle-class New Yorkers priced out of more gentrified Brooklyn neighborhoods.