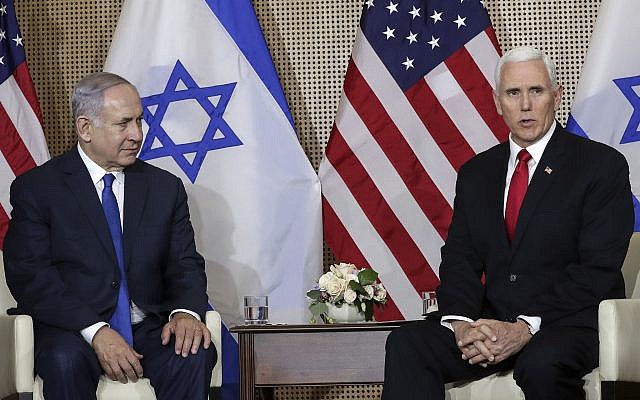 Prime Minister Benjamin Netanyahu and US Vice President Mike Pence met in Warsaw Thursday, where the Israeli leader said he was eager to learn details of the Trump administration’s peace plan for resolving the Israeli-Palestinian conflict.

“I look forward to seeing the plan once it is presented,” Netanyahu said to Pence ahead of talks they held at the POLIN Museum of the History of Polish Jews.

“I have to say that I know that the Trump administration seeks to ensure the security of Israel for generations, and even though I always say, based on the experience that we endured here [at the Warsaw ghetto], Israel must always be able defend itself by itself against any threat,” Netanyahu said, “It’s comforting to know that we have such a strong ally in the United States of America.”

“The fact that we’re meeting here at the site of Warsaw ghetto is deeply meaningful,” Pence said to Netanyahu, who is also Israel’s foreign minister.

“Israel is our cherished ally,” Pence added, thanking Netanyahu for his commitment to the bilateral US-Israel friendship.

When the Jews of the Warsaw ghetto rose up in their famous revolt in early 1943, “no one came to help them,” Netanyahu said. “Today we have built our own capacity to defend ourselves. But we have a great friend. And the greatest friend of all is the United States of America. There’s no alliance like ours.” 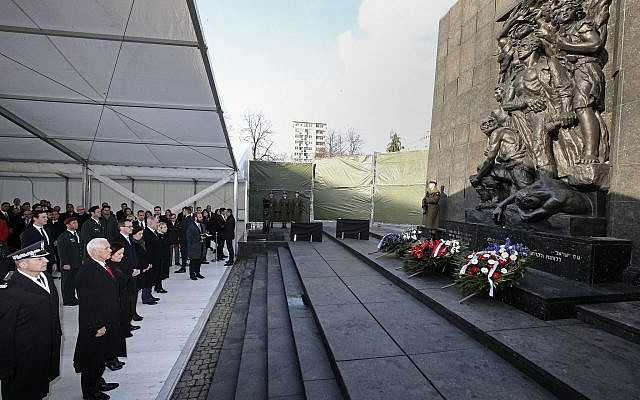 Earlier Netanyahu and Pence laid wreaths at the Warsaw Ghetto Uprising memorial, which is located at the same square as the museum in the heart of the former ghetto. The ceremony was also attended by the Prime Minister of Poland Mateusz Morawiecki.

During the Holocaust, Nazi Germany occupied Poland and enclosed some 450,000 Jews in what became known as the Warsaw ghetto. Most of the ghetto’s residents died of hunger and disease there, or in the gas chambers of the Treblinka death camp. The uprising broke out April 19, 1943, when about 750 young Jewish fighters armed with just pistols and other light arms attacked a German force more than three times its size. In their last testaments they said they knew they were doomed but wanted to die at a time and place of their own choosing.

The Warsaw Ghetto Uprising, the greatest incidence of Jewish resistance to the Nazis, has become a monumental symbol in Jewish and Israeli lore.

Netanyahu and Pence were in Warsaw, along with other top envoys and leaders — including from some Arab states — for a conference on the Middle East.

The two-day conference, which was originally called with a focus on countering Iran but now carries the toned-down and vague goal of seeking stability in the Middle East, opened Wednesday with a dinner at the Royal Castle in Warsaw’s old town.

The summit appears to be the first time an Israeli leader and senior Arab officials attended an international gathering centered on the Middle East since the 1991 Madrid peace conference, which set the stage for the landmark Oslo Accords between Israel and the Palestinians. 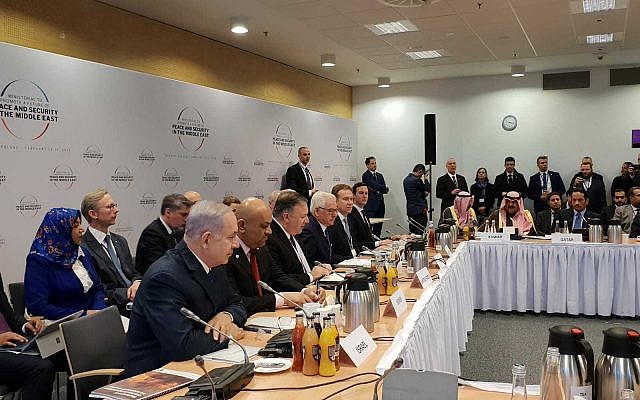 Prime Minister Benjamin Netanyahu (left, foreground) with other leaders at the conference on Peace and Security in the Middle East in Warsaw, on February 14, 2019. (Amos Ben Gershom/GPO)

Trump has long promised to try and reach a so-called “deal of the century” to end the long-simmering Israeli-Palestinian conflict, but his efforts have derailed since his decision to transfer the US embassy to Jerusalem.

The Palestinian Authority has castigated the move, declared the US no longer an honest broker in negotiations, and rejected any plan the White House may offer, with PA President Mahmoud Abbas calling it the “slap of the century.”

The Trump administration is putting the final touches on the plan, but is not expected to publish the proposal until after the Israeli general election in April.

Speaking to reporters on the sidelines of the conference earlier Thursday US Secretary of State Mike Pompeo said “confronting Iran” is an essential requirement for achieving peace in the Middle East.

“You can’t achieve peace and stability in the Middle East without confronting Iran, it’s just not possible,” he told reporters ahead of a meeting with Netanyahu.

Pompeo ignored reporters’ questions about the administration’s planned release of a proposal for an Israeli-Palestinian peace deal.

Times of Israel staff and agencies contributed to this report.