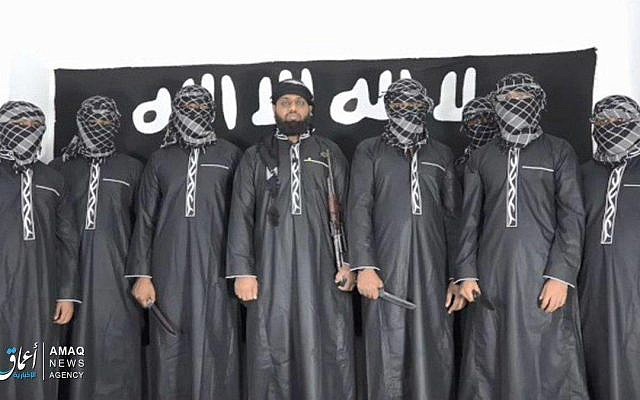 A photo published on the Islamic State terror group's propaganda outlet, the Amaq agency, on April 23, 2019, showing what the group says is eight bombers who carried out the Easter attacks in Sri Lanka. (Amaq)

The Islamic State terrorist group on Tuesday published a photo it claims shows the eight bombers who carried out the devastating string of suicide attacks targeting churches and hotels in Sri Lanka that killed at least 321 people on Easter Sunday.

The group’s official propaganda agency, Amaq, said the photo of the men standing behind the IS flag was taken shortly before the terrorist attacks.

The jihadist group claimed responsibility for the attacks earlier on Tuesday, some 48 hours after the near-simultaneous blasts tore through three high-end hotels popular with foreigners and three churches packed with Christians marking Easter.

The group put out a statement on Amaq detailing where each attacker was allegedly deployed. It gave only the nom de guerre of each attacker and didn’t specify their nationalities. The statement identified the attackers as Abu Ubayda, Abu al-Mukhtar, Abu Khalil, Abu Hamza, Abu al-Bara’a, Abu Muhammad and Abu Abdullah.

The Islamic State, which has lost all the territory it once held in Iraq and Syria, has made a series of unsupported claims of responsibility.

It offered no photographs or videos of attackers pledging their loyalty to the group, which often have accompanied such claims.

The militant group said six were suicide bombers who “immersed” themselves among the victims before blowing up their vests. It said one attacker clashed with police in Dematagoda.

The group said the attackers targeted citizens of the US-led coalition fighting IS and referred to Easter as an “infidel holiday.”

The IS statements came after Sri Lanka’s government said initial investigations suggested the attack had been carried out as “retaliation” for shootings at two mosques in New Zealand last month that killed 50 people.

Sri Lankan authorities have blamed a little-known local Islamic group, National Thowfeek Jamaath, for the Easter attacks. However, there is no recent history of Muslim extremist attacks in Sri Lanka, a predominantly Buddhist island nation off the southern tip of India. Nor was there any explanation for how a group previously not known for violence could engineer such a massive attack, which experts said resembled an assault by the Islamic State group or al-Qaeda.

Police have detained at least 40 people as they investigate the worst act of violence in Sri Lanka since a civil war ended a decade ago.