The Israeli army on Tuesday afternoon struck what it said was a Hamas tunnel in the Gaza Strip that extended hundreds of meters into Egyptian and Israeli territory.

The IDF said the U-shaped attack tunnel destroyed near Rafah and the Kerem Shalom border crossing was still under construction and not yet usable.

The military said the tunnel crossed from Gaza into Egypt and from there into southern Israel, and was intended both for smuggling weapons and for attacks against Israel.

Its full length was around 2 kilometers (1.2 miles), the army said, and the segment inside Israeli territory was 900 meters (half a mile) long.

The military discovered the tunnel in the past two weeks, an army spokesperson said.

“This is a very long tunnel,” a source told the Ynet news site. “It also had exit shafts on the Egyptian side. The tunnel was dealt with using airstrikes [in Gaza], and in the coming hours will also be taken care of on our side to neutralize it entirely.”

Israeli officials reportedly informed Egyptian counterparts of the planned strike on the tunnel, according to Hebrew-language media. It was not clear if Israeli strikes on the tunnel included action over the border in Egypt. 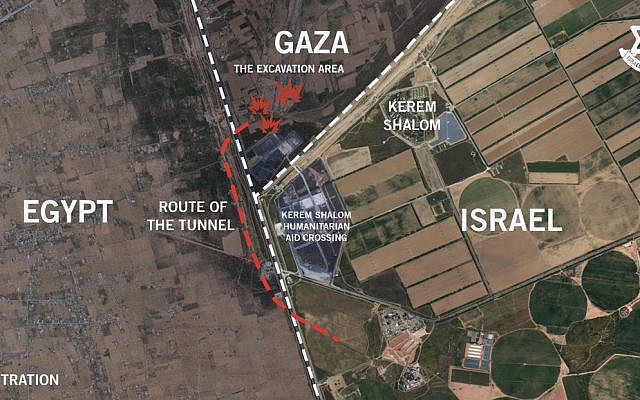 A map handed out by the Israeli military showing the apparent route of a Hamas tunnel that extended from Gaza to Israel and Egypt, and destroyed by Israel on May 29. (IDF Spokesperson’s Unit)

The destruction of the tunnels came as Israeli planes pounded Gaza in response to a morning barrage of mortar fire, including one shell that landed in a kindergarten playground shortly before children were due to arrive.

The IDF said it struck over 35 terror targets in Gaza throughout the day, belonging to Hamas and Islamic Jihad. These included weapons caches, naval targets and terror headquarters, the IDF said. 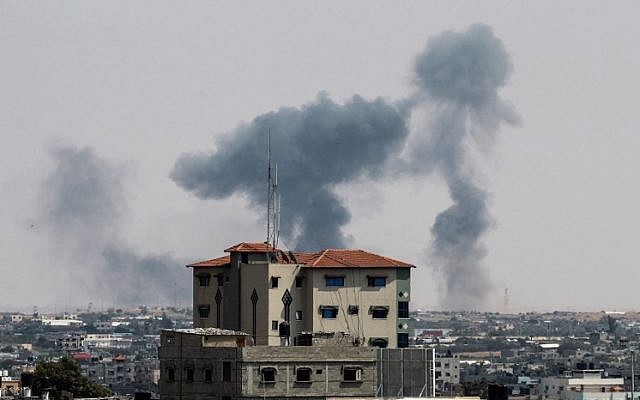 A picture taken from Rafah in the southern Gaza Strip on May 29, 2018, shows smoke billowing over buildings following an Israeli air strike on the Palestinian enclave. (AFP/ SAID KHATIB)

Hamas identified one of the targets as a training facility.

Some 28 mortar shells and rockets were fired into Israel by Palestinian terror groups Tuesday morning, and media reported dozens more in the afternoon following the strikes.

Three Israeli soldiers were lightly injured from shrapnel in the afternoon attacks.

The military said a total of 25 projectiles had been knocked down by Iron Dome missile defense batteries as of 4 p.m., though the tally was not official.

The morning attacks were mounted by the Iranian-backed Palestinian Islamic Jihad terror group, apparently in revenge for the IDF killing three of its members in a cross-border exchange earlier in the week.

In a statement, Islamic Jihad described its assault as “a blessed response of the resistance,” adding, “our people’s blood is not cheap.”

The Israeli military, however, ultimately blamed the barrages on the Hamas terror group, which rules Gaza, saying the barrages were the result of the organization’s “failures” to successfully attack Israel during the recent riots along the border.

There was no claim of responsibility for the afternoon barrage. As a matter of policy, the Israeli army considers Hamas, which rules Gaza, to be responsible for any attack emanating from the beleaguered coastal enclave.

Prime Minister Benjamin Netanyahu had vowed to respond “with great force” to the mortar shells, one of which landed just outside a kindergarten less than an hour before children were due to arrive.

Defense officials reportedly said the next 24 hours would be “intense” amid the worst escalation on the Gaza border since the 2014 war, known in Israel as Operation Protective Edge.

The army evacuated the Zikim beach near Gaza, while local authorities in the region told residents to stay near their bomb shelters in the coming hours. 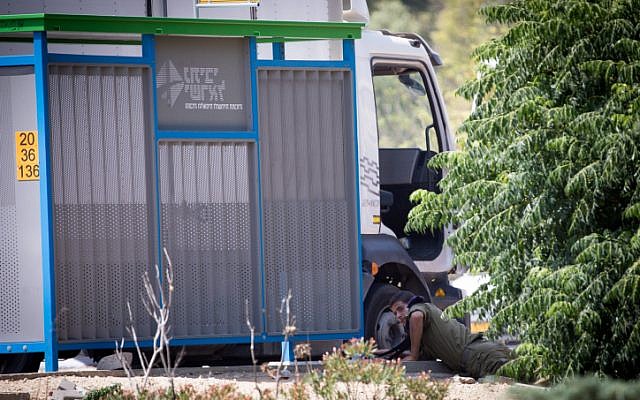 An Israeli soldier takes cover as rocket sirens blare in southern Israel on May 29, 2018. (Yonatan Sindel/Flash90)

“Israel views the attacks on it and on its communities by Hamas and Islamic Jihad from the Gaza Strip with great severity,” Netanyahu said earlier, during a conference in the northern Galilee region, ahead of urgent security consultations set to take place later in the day.

“The IDF will retaliate with great force to these attacks,” the prime minister added. “Israel will make anyone trying to harm it pay a heavy price, and we view Hamas as responsible for preventing such attacks against us.”

Judah Ari Gross and Michael Bachner contributed to this report.