Bringing weightlifting back to the Maccabiah Games after over 3 decades, competitors from around the globe — amateurs and pros — hoist barbells in staggering shows of strength

Judah Ari Gross is The Times of Israel's religions and Diaspora affairs correspondent.

It was in 1898 at the Second Zionist Congress that early Zionist leader Max Nordau declared: “We must think of creating once again a Jewry of muscles.”

So Nordau’s spirit was surely smiling down on Jerusalem’s YMCA as Jews from around the world, men and women, gathered to show off that muscular Jewry with a weightlifting competition in the Maccabiah Games, which came to a close last week.

This was the first time in 33 years that weightlifting had been a part of the Maccabiah Games, having been brought back by popular demand.

Over the course of two days, the 17 women and 21 men who took part in the competition heaved increasingly heavy barbells up over their heads in two types of strictly choreographed lifts: the snatch and the clean-and-jerk.

In the former, lifters take hold of the barbell in a squatting position, then fling it up high over their heads, locking their arms once the barbell is up in the air and then rising into a standing position.

The clean-and-jerk is the more intricate of the two lifts. In it, the lifter squats down and takes hold of the barbell. They then flip their wrists back, positioning the bar on the top of their chest and rise into a standing position. In one synchronized movement — the jerk — they thrust the barbell up over their head and jump into the air, landing with one foot slightly forward and one leg back. Keeping the bar above their head, they then move their feet to be parallel to one another. 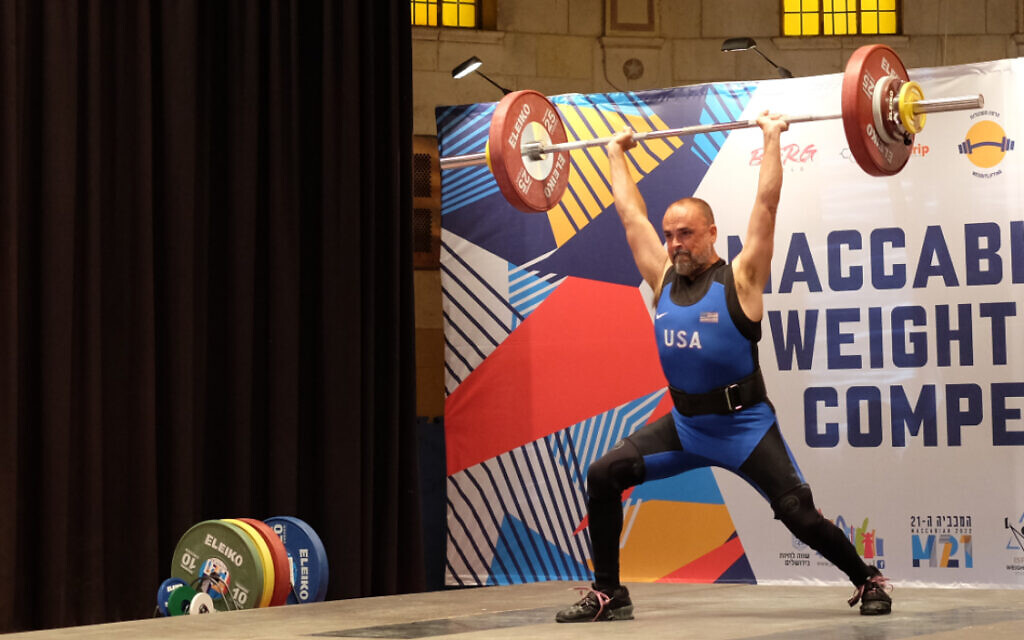 American Michael Ben-Hain lifts a barbell during the clean-and-jerk segment of the Maccabiah’s weightlifting competition in Jerusalem on July 19, 2022. (Judah Ari Gross/Times of Israel)

For the uninitiated: Watching weightlifting is less like watching a competition and more like being present at a solo performance, particularly in the Maccabiah event, where the athletes made their lifts on the stage of a theater. In commemoration of the three weightlifters and one weightlifting coach who were among the 11 Israeli athletes murdered by terrorists at the 1972 Munich Olympics, the organizers placed a poster with the four men’s photographs on the right of the stage.

The athleticism on display is astounding; the facial expressions are unfortunate

For each lift, the competitors come out clad in skintight unitards, sometimes with heavy leather belts or knee braces. After performing a short preparatory ritual — normally grinding in their feet for greater traction or carefully gripping the barbell — they take a deep breath and rapidly perform the first movement of the lift: heaving the bar over their heads in a squatting position for the snatch or flipping it up onto their upper chest for the clean-and-jerk. 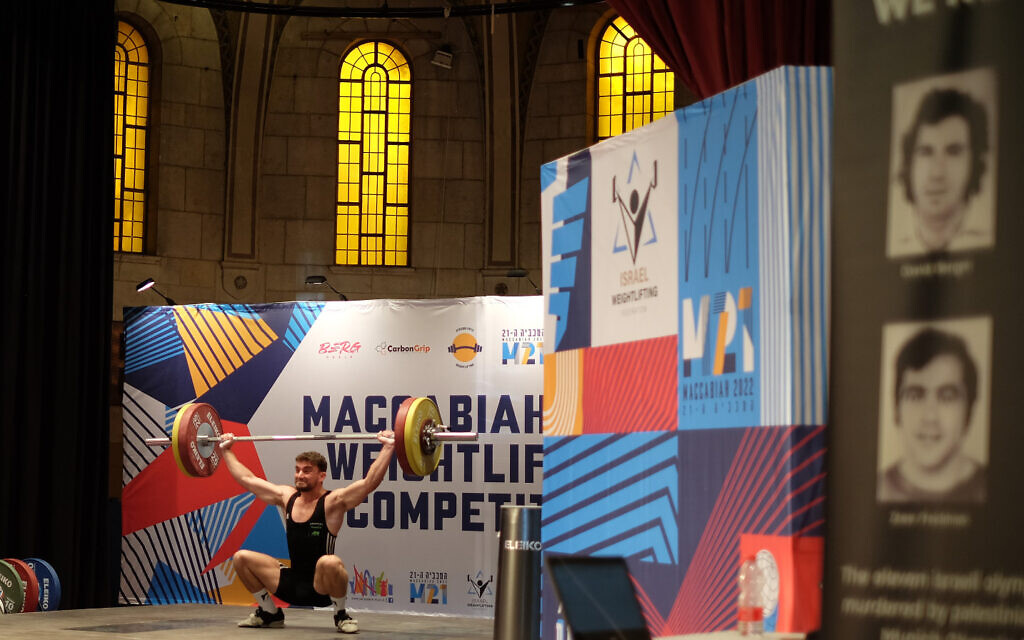 Israeli Yoel Slutzky lifts a barbell during the snatch segment of the Maccabiah’s weightlifting competition in Jerusalem on July 19, 2022. (Judah Ari Gross/Times of Israel)

From there, they normally catch their breaths and mentally prepare for the next stage, as the crowd cheers them on, yelling — mostly in English, regardless of the athlete’s nationality — that “you got it” and encouraging them to “breathe through your ears.”

At this stage, the athleticism on display is astounding; the facial expressions are unfortunate. As the men and women contend with a truly tremendous amount of weight, sometimes enough to noticeably bend the barbell itself, their faces show every ounce of it, as they seem to be in such dire need of oxygen for the next part of the lift that they do appear to be on the verge of growing gills. 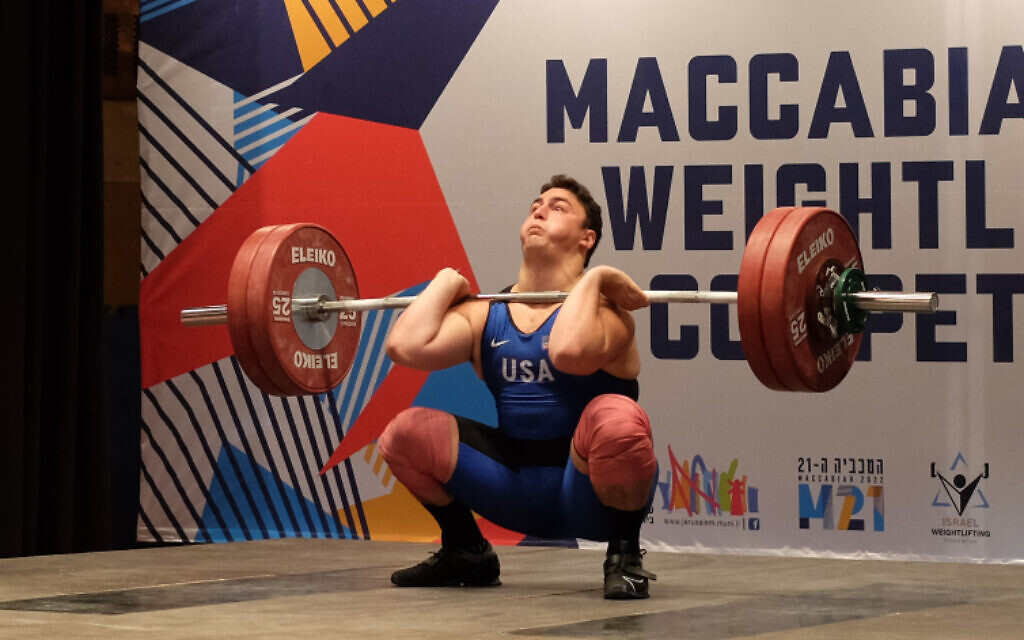 American Mitchell Marks flips a barbell onto his upper chest during the clean-and-jerk segment of the Maccabiah’s weightlifting competition in Jerusalem on July 19, 2022. (Judah Ari Gross/Times of Israel)

In the snatch, the lifters slowly rose to their feet, holding the bar aloft — or not, dropping it behind them if they’d lifted more than they could bear or were a bit off in their form.

In the clean-and-jerk, the initial flip was just the prelude to the main event; after catching their breath, the lifters performed the full-body, frenetic movement of shoving the barbell high into the air as they kicked their legs out into a sort of lunge, usually accompanied by an energetic grunt.

The competitors ranged from rank amateurs to internationally ranked Olympic athletes, coming from all over the world and ranging in age from 17 to 49

It was normally in this split second that the athlete knew if they had performed a “clean lift” or if their stance was unstable and they were not going to make it, that realization generally hitting them quickly and clearly, prompting them to immediately drop the bar to avoid injury. If they succeeded, however, their faces normally turned into a gritty smirk, as they completed the lift and slowly moved their feet to again be in parallel before dropping the bar onto the ground for a satisfying, earthshaking bounce. 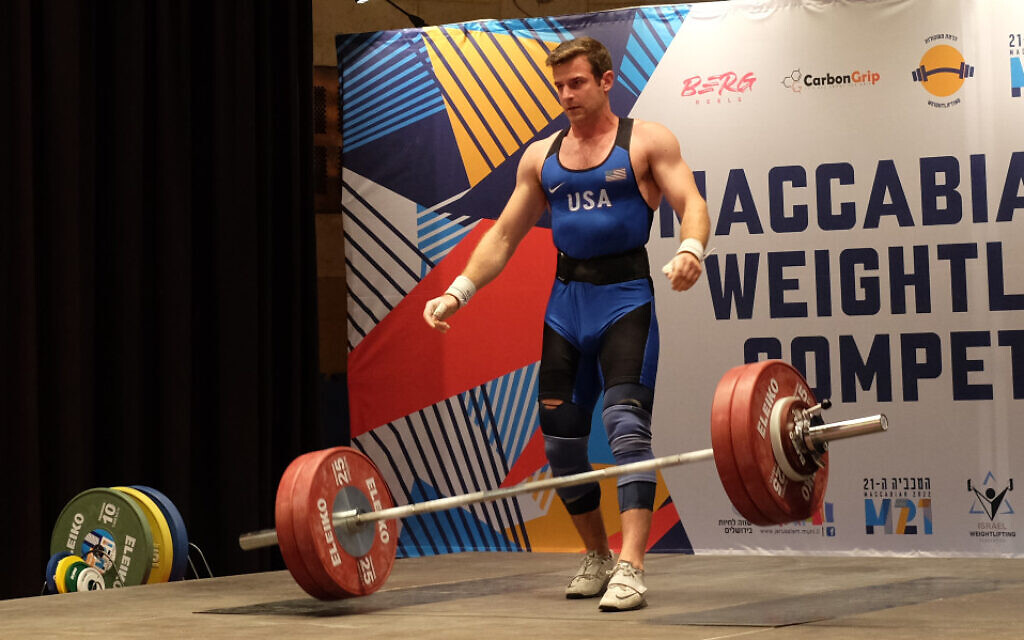 American Jacob Bockelmann drops a barbell after a successful lift during the clean-and-jerk segment of the Maccabiah’s weightlifting competition in Jerusalem on July 19, 2022. (Judah Ari Gross/Times of Israel)

The competitors ranged from rank amateurs to internationally ranked Olympic athletes, coming from all over the world and ranging in age from 17 to 49. Some were lithe, with their ability to hoist the heavy bars mainly coming from proper form and careful training, while others were bulkier and appeared to rely more on natural muscularity to heave the weights.

Though the lifters pushed themselves to their limits, the competition was a decidedly friendly one, with spectators cheering for all of the athletes regardless of their nationality and with the competitors chatting with one another chummily after their events ended and sticking around to cheer each other on. 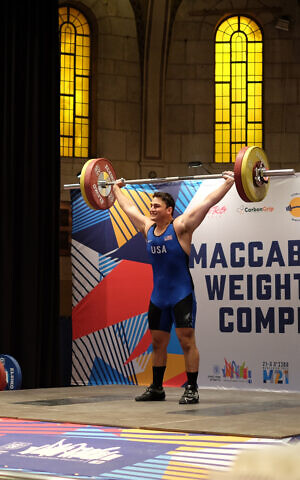 American Mitchell Marks smiles for the crowd after a successful lift during the snatch segment of the Maccabiah’s weightlifting competition in Jerusalem on July 19, 2022. (Judah Ari Gross/Times of Israel)

Following two days of competition, a high priestess and high priest of Nordau’s muscular Judaism — perhaps unofficially the world’s strongest Jewess and Jew — were named: Celia Gold of the United States and David Litvinov of Israel, who took gold in the women’s and men’s competitions, respectively.

Rubanovich took the silver medal for her efforts, while Peru’s Atalya Nakar took the bronze. 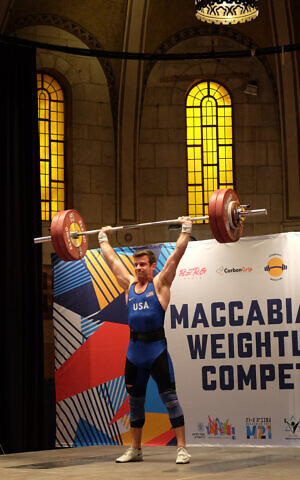 American Jacob Bockelmann lifts a barbell during the clean-and-jerk segment of the Maccabiah’s weightlifting competition in Jerusalem on July 19, 2022. (Judah Ari Gross/Times of Israel)

In both lifts, Litvinov performed better than in the 2021 Tokyo Olympics, in which he competed on the Israeli team, but just shy of his personal best performance in the 2019 world championships in Thailand.

The second and third place finishers in the men’s competition — Artur Mugurduov and Igor Olshanetski, respectively — were also Israeli citizens but played for the “Olim” team, a group of relatively recent immigrants to Israel who competed under the Maccabiah flag rather than under the flag of a specific country. This was, in part, a way to let Israeli-Russian dual nationals have a chance to compete as the Russian delegation bowed out of the competition this year, but it practically also allowed for more Israelis to take part. Indeed, both Mugurduov and Olshanetski have competed for Israel in international weightlifting competitions over the years.