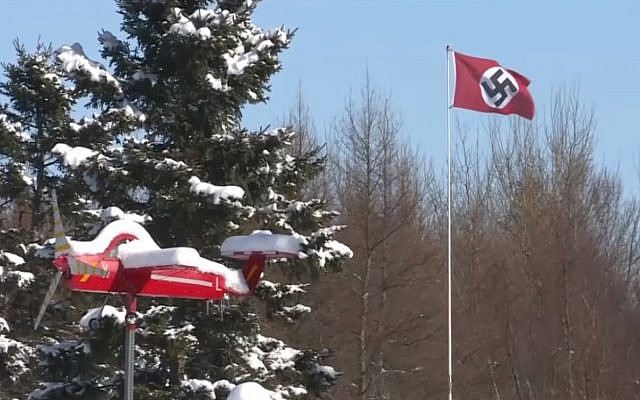 A Nazi swastika flag was raised over a property in the Canadian province of Prince Edward Island, drawing complaints from neighbors and the local Jewish community.

The flag, which was in the colors and design of the Holocaust-era Nazi party, was displayed at the top of a tall pole in Charlottetown for several days before it was finally taken down, the CBC broadcaster reported on Saturday.

Community resident David Mol, whose Dutch parents fled the Nazi regime during World War II, said the flag had no place in Canada.

“The fact that that flag is flying, fluttering in the winds that blow across this big democratic country of ours is repulsive,” Mol said.

According to Charlottetown police, flying the flag is not illegal but officers had planned to speak with the property owner to ask that it be removed.

Prince Edward Island Jewish community president Leo Mednick said the swastika and other Nazi symbols are used as “a dagger to hurt people, to upset people.”

“I understand it’s not against the law, but it’s against the Island philosophy,” he told CBC. “I don’t think that’s the kind of place that we want to live in.”

The flag was finally removed late Friday, the report said.