A group of Palestinian nurses from the West Bank and Gaza Strip quickly huddled around a high-tech mannequin at a hospital in central Israel that, for the sake of the exercise, had gone into a cardiac arrest. One of them carefully placed an oxygen mask on the $100,000 blonde-haired dummy and another started to perform CPR on it, while a third set a pulse oximeter around its finger.

Communicating in English to each other, the nurses continued to attempt to resuscitate the mannequin, as their Israeli instructor observed them. Minutes later, the “patient” woke up from its cardiac arrest and its condition stabilized.

The nurses were taking part in a four-day medical simulation course that has been held for Palestinian health professionals at the Sheba Medical Center in Ramat Gan a few times annually for the past ten years.

“I have learned many things during this experience, which I will bring back with me to my community,” said a 42-year-old nurse from Gaza City, who teaches clinical nursing at a hospital in the coastal enclave and asked to remain nameless. “It is important because it has enabled me to work on improving my skills without fear that a real patient will be harmed.”

The course took place from Monday to Thursday at Sheba’s Israel Center for Medical Simulation and included various exercises with mannequins related to trauma management and resuscitation.

The program also featured sessions on managerial skills, focusing on how to deal with tense situations. In one of those sessions, for example, the nurses were asked to speak to an individual posing as a relative of a patient who was frustrated about the treatment his family member received. 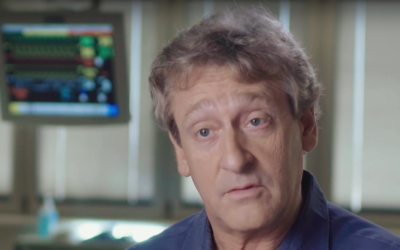 Amitai Ziv, the founder and director of the Center for Medical Simulation, said that the courses at the facility aim to allow the health professionals to learn in a safe atmosphere.

“The message embedded in the programs here is let us err and reflect on our errors in a safe environment,” Ziv, who was a pilot in the Israeli Air Force, said in an interview, arguing such experiences make health professionals more competent at their jobs.

The third most common cause of death worldwide is medical errors — estimates show 250,000-400,000 people die annually in American hospitals because of them — he said.

The course this week brought together a total of 16 Palestinian nurses, 11 from the West Bank and five from the Gaza Strip. It marked the first time that the Center for Medical Simulation concurrently hosted health professionals from both the West Bank and Gaza.

Only one of the nurses was a woman. At past courses, multiple women health professionals have attended, but six female nurses who wanted to come this week were denied permits, Ziv said.

Physicians for Human Rights Israel covered the costs of the program as well as the attendees’ expenses including hotel rooms, transportation and meals. Ran Goldstein, the executive director of the organization, said the total cost was approximately NIS 90,000 ($26,000).

Ziv said that while the courses for Palestinian health professionals seek to make them better at their jobs, they also aim to build a bridge between Israelis and Palestinians.

“Since Israelis and Palestinians often meet on the killing and battle front, we strongly believe it is important that they meet on the health and education front,” he said, adding that he holds that “professional relationships among human beings can bring about trust and friendliness.”

Since 2009, approximately 150 Palestinian health professionals, including doctors, nurses and paramedics, have completed courses at the Center for Medical Simulation, Ran Yaron, a spokesman for Physicians for Human Rights Israel, said. 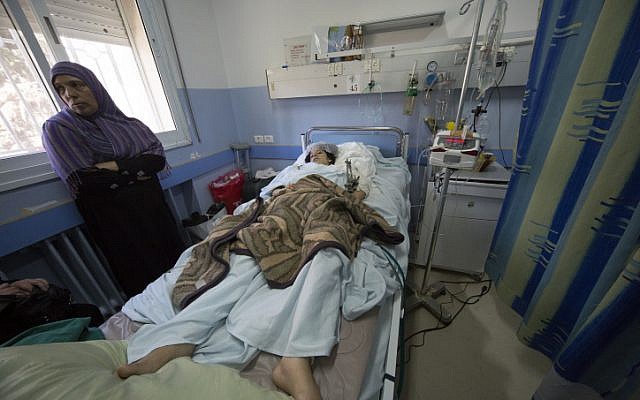 A Palestinian woman from the Gaza Strip injured during an Israeli airstrike in Gaza is treated at the Saint Joseph hospital in East Jerusalem on July 30, 2014. (Sliman Khader/FLASH90)

Farid, a 42-year-old nurse from Nablus, said that medicine is a field that transcends political and national divides.

“It does not matter who you are — an Israeli or Palestinian, Jew or Muslim, local or foreigner,” he said. “In health, we see and treat everyone as a human being. We take this approach in our interactions with sick persons and our colleagues here and elsewhere.”

Farid also recalled that he had personally provided first aid to Israelis involved in a car crash near Ramallah in the West Bank two years ago.

“I saw that two vehicles had collided. I pulled over to the side of the road and helped them,” he said. “When I did that, the identity of the injured persons made no difference to me. All I saw were people in need of aid.”

“The gap between the health sectors in Israel and the Palestinian territories is huge,” he said. “So we are doing what we can to make it smaller because we believe that the health systems in the West Bank and Gaza ultimately should be independent.”

The Palestinian Authority annually covers the cost of most or all of the medical expenses of tens of thousands of Palestinians who receive treatment abroad including in Israel, an official in the PA Health Ministry, who spoke on condition of anonymity, said.

Even though the PA announced in early 2019 that it would no longer refer patients to Israeli hospitals, a significant number continue to receive treatment in them, the official said, declining to elaborate further.

The numbers of Palestinians receiving care at Sheba, however, has fallen dramatically, an official at the medical center, who asked to remain anonymous, reported. Sheba historically has provided treatment to an average of 15,000 Palestinians every year, the official said. 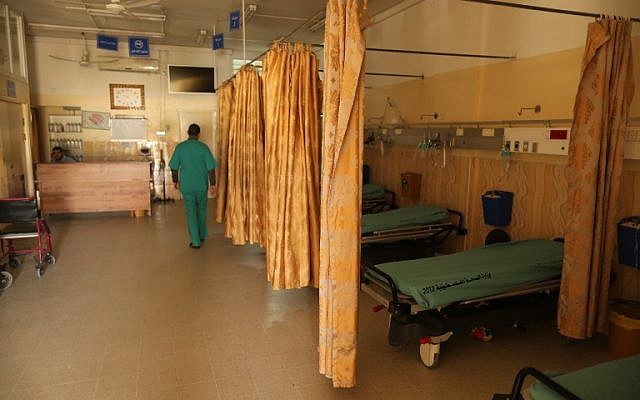 Illustrative: An employee of the Hamas-run health ministry in Gaza at the Beit Hanun hospital in the northern Gaza Strip, after it stopped its services on January 29, 2018, when it ran out of fuel. (Mahmud Hams/AFP)

While the program at Sheba started on Monday, the five Palestinian nurses from Gaza arrived on Tuesday because they were only notified on Monday evening that they had received permits to come.

A source with knowledge of the matter who spoke on condition of anonymity said that Ziv, the director of the Center for Medical Simulation, sent a letter dated December 4 to the Coordinator of Government Activities in the Territories, the branch of the Defense Ministry responsible for liaising with the Palestinians, asking for it to grant permission to the nurses to enter Israel. A copy of the letter was viewed by The Times of Israel.

The source with knowledge of the matter, however, said that COGAT issued the permits for the nurses and has granted them to other Palestinian health professionals to participate in past courses at the Center for Medical Simulation, without requests from the PA. The source added that PA officials have not been cooperative in requesting permits from their Israeli counterparts for the health professionals to participate in the programs.

A spokesman for the PA Civil Affairs Commissions said he was looking into the matter.

Back at Sheba, as the sun began to set in the late afternoon, the nurses watched a short film and then prepared to head back to their hotel.

Ayman, a 43-year-old nurse from Bethlehem, said he hoped he would be able to return to the Center for Medical Simulation in the future.

“This is my first time doing a training in Israel and it has been very beneficial,” he said. “So I wish that it will not be the last.”