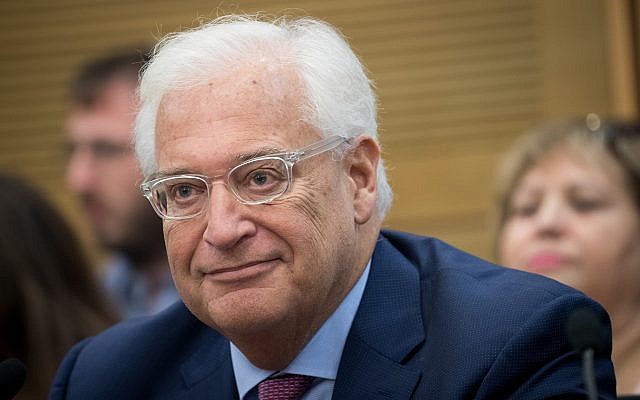 American Ambassador to Israel David Friedman attends the lobby for Israel-US relations at the Knesset on July 25, 2017. (Yonatan Sindel/Flash90)

RAMALLAH, West Bank — The Palestinian Authority attacked comments Wednesday by the US ambassador to Israel in which he blamed it for the failure of peace efforts, after an Israeli was killed in the West Bank.

In the latest tensions between them, the Palestinian Foreign Ministry accused US ambassador David Friedman of a “prejudiced and selective attitude” toward the conflict.

It comes a month after US President Donald Trump recognized Jerusalem as Israel’s capital, angering the Palestinians.

“An Israeli father of six was killed last night in cold blood by Palestinian terrorists,” Friedman said on Twitter Wednesday after a 35-year-old was killed near an Israeli settlement in the West Bank.

“Hamas praises the killers and PA (Palestinian Authority) laws will provide them financial rewards. Look no further to why there is no peace.”

An Israeli father of six was killed last night in cold blood by Palestinian terrorists. Hamas praises the killers and PA laws will provide them financial rewards. Look no further to why there is no peace.
Praying for the bereaved Shevach family.

Friedman was referring to payments to the families of imprisoned Palestinians, who have carried out attacks against Israelis, and to those killed while carrying out attacks.

Hamas, a Palestinian terror group that controls the Gaza Strip, praised the attack.

The Palestinian Foreign Ministry said in a statement that Friedman’s comments reflected his “prejudiced and selective attitude toward the occupation, settlement construction, and the Palestinian just and legitimate national rights.”

It pointed to Friedman’s silence over what Palestinians say was the killing by Israeli forces of a disabled Palestinian man during recent protests and clashes on the Gaza border and other killings as evidence of his bias. 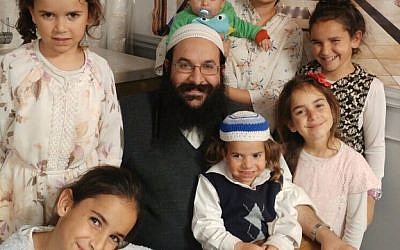 Rabbi Raziel Shevach with his family, in an undated photo (Courtesy of the family)

“Friedman’s remarks and positions further complicated the road towards the peace process and the resumption of negotiations between the Israeli and Palestinian sides, specifically after President Donald Trump’s declaration on Jerusalem,” the statement added.

Trump’s December 6 announcement that he would move the US embassy from Tel Aviv to Jerusalem was hailed by Israeli Prime Minister Benjamin Netanyahu and by leaders across much of the Israeli political spectrum. Trump stressed that he was not specifying the boundaries of Israeli sovereignty in the city, and called for no change in the status quo at the city’s holy sites.

However, the move enraged the Palestinians who said they will no longer engage with the Trump administration’s push for fresh peace talks.

Israeli officials say payments to the families of attackers encourages further violence and have regularly called for a halt to them.

On Tuesday, the Defense Ministry said the Palestinian Authority had paid out NIS 1.2 billion ($350 million) last year in such payments.

For Palestinians, such payments are a key source of income for families.

“We stress the commitment of the Palestinian people to the prisoners and families of the prisoners. This is a legal, moral and humanitarian obligation,” he said