Dates with repeating numbers—sort of like Jewish holidays that coincide with Christian ones, such as Passover/Easter, or Chanukah/Christmas—come along randomly and rather rarely.

In this case, 2/22/22 will be the last one like it until Jan. 11, 2111, which isn’t for another 89 years. To mark the occasion, Atlantis Paradise Island in the Bahamas will offer a two-day sale with 22% off the resort’s best available rates.

For these two days only—Feb. 22 or 23—guests can book rates starting at $222 per night at one of the Caribbean resort’s four hotels: The Coral, The Royal, The Cove or The Reef. That rate is valid for stays from 2/22/22 through 12/22/22, with a two-night minimum. Email subscribers of the Atlantis will get early access to the sale, beginning Feb. 17. 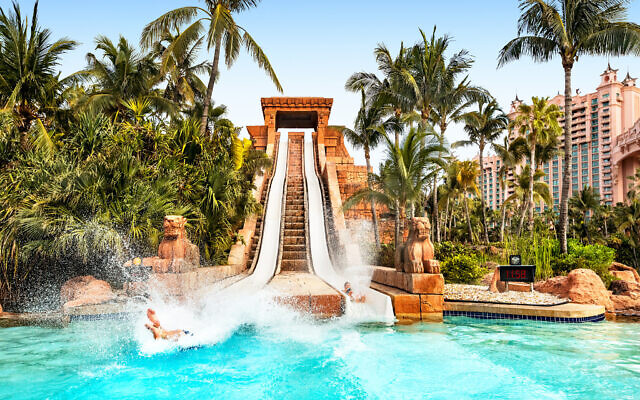 Challenge a friend to a high-speed splashdown! Guests can race each other down the twin high-speed Challenger Slides of the Mayan Temple, and then check their speeds on the time clocks at the bottom to see who won! (Courtesy)

The deal comes just in time for spring break and Passover, which will feature new signature kosher dining services available through Atlantis Paradise directly. What’s more interesting is the flight from Miami to Atlantis is less than 45 minutes, yet a world apart. The spectacular views, the world’s largest open air marine habitat with over 50,000 aquatic animals and soft smooth beaches make Atlantis the perfect paradise for Bar-Mitzvas, weddings and celebrations.

In a way, the Atlantis Paradise Island’s outreach to kashrut-observant Jews harks back to the origins of its developer, South African hotel entrepreneur Sol Kerzner. The son of Jewish immigrants from Russia who ran a chain of kosher hotels in Johannesburg, Kerzner—who died in March 2020 at the age of 84—acquired his first property in 1962; within two decades, he was already operating 30 luxury hotels across South Africa. 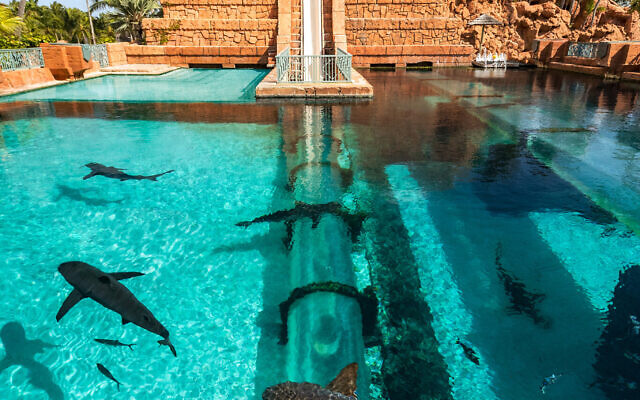 The Leap of Faith offers a daring and adventurous almost-vertical drop from the top of the iconic Mayan Temple. This 60-foot body slide propels riders at tremendous speed through a clear acrylic tunnel submerged in a lagoon filled with amazing marine life.

In 1994, Kerzner bought the bankrupt Paradise Island Resort in the Bahamas from entertainer Merv Griffin. Over the next four years, he spent $800 million, as the resort’s own website boasts, “to bring to life the myth and legend of the lost city of Atlantis.”

By the time Kerzner’s newly revamped resort opened, it boasted 1,200 rooms and the Caribbean’s largest casino. In 2007, the property—which dominates tiny Paradise Island just across a narrow channel from Nassau, capital of the Bahamas—underwent a $1 billion expansion.

Atlantis now offers a new signature Kosher dining service and experience, it’s exclusively available for events and group functions. Inspired by culture, customs, and cooking techniques most popular in Israel and the region, Atlantis’ Kosher dining service offers fare through a contemporary lens, offering an array of classic and novel dishes that underscore the power of cooking with simple, fresh ingredients. 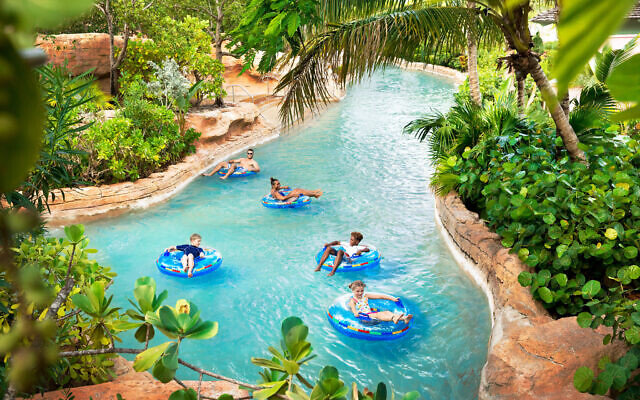 Dive into The Rapids River at Aquaventure, where resort guests are propelled along a wild mile-long waterway in inner tubes via water escalators, rolling waves, and extreme rapids powered by master blaster technology.

Indeed, it’s probably the only resort on Earth that advertises not only a spectacular Mayan temple water slide complex, the 140-acre Aquaventure water park and a $15 million marina, but also daily minyanim and shiurim as well as an “extraordinary casino” and “incredible scholars.”

Today, the Atlantis Paradise Island offers a combined 3,805 rooms throughout its six distinct hotel properties: The Cove, The Royal, The Reef, The Coral and Atlantis Marina. 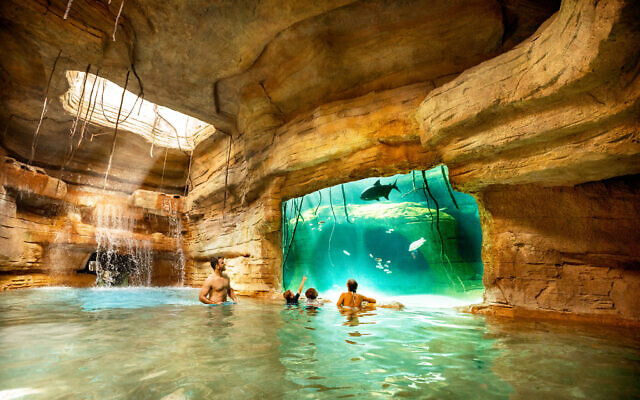 The Abyss begins with a staggering 50-foot, near-vertical drop through complete darkness within the Power Tower. Totaling 200 feet long, this thrilling body slide ends as guests splash through waterfalls and into The Cenote – an underground lair of prehistoric fish.

Atlantis is one of the few vacation resorts that is less than an hour from the United States and offer a multitude of kosher options and religious lifecycle events.

Guests will be able to access a list of kosher meals to order prior to check-in including a selection of soups, entrees (fish, chicken and beef), and desserts. Kosher meals are purchased from US-based suppliers and are served on a sealed plate with individually wrapped flatware. Each guest will be able to verify and remove the wrapping, ensuring the kashrut standards are upheld. 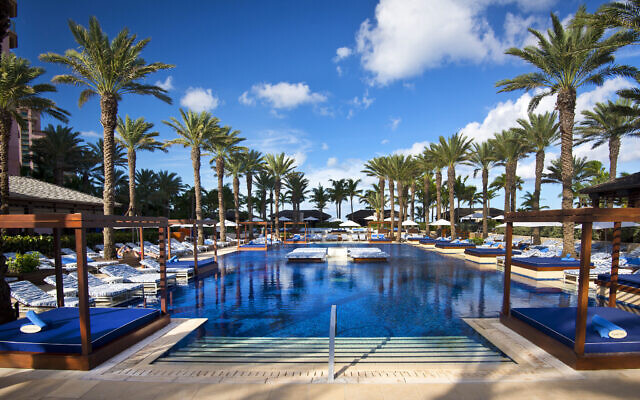 In between meals you can adventure out and enjoy the white sand beaches, tranquil azure waters, spas, golf, shopping and luxury amenities including private sunset speedboat and art tours.

To learn more or book a reservation, you can click here.