A small tattered black valise filled with Hebrew scrolls was thrust at an American doctor in 1959. Six decades later, they are enchanting scholars at the National Library of Israel

Amanda Borschel-Dan is The Times of Israel's Jewish World and Archaeology editor.

Moscow, 1959: An American doctor is taken into a back room by a local rabbi where a small leather suitcase is thrust upon him.

“It has no future here,” said the Russian rabbi. “Take it away and preserve it… But be careful — we’re being followed.”

Inside the tattered black clarinet-sized case, Dr. Max Leopold Brodny discovered rolls of parchment and handwritten book with Hebrew writing. He returned with it to Chicago where he kept the case in a hall closet — and his promise to protect it.

Two decades later, upon Brodny’s death, the valise was given to his daughter, Eleanor Coe. She made some inquiries with Chicago-based Judaica dealers to discern what were its contents, but came up short. Only recently, when Coe asked local author Stacy Derby to pen a biography of her father, a prominent physician and inventor, did the case of the mysterious suitcase again come to light. 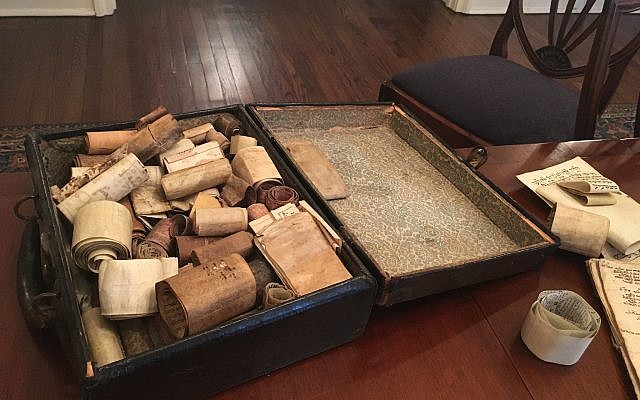 In its former Chicago home, the mysterious magic-filled black suitcase given to Dr. Max Brodny in Moscow in 1959. (courtesy)

Derby suggested she consult with a former professor, who in turn proposed turing to the National Library of Israel for help. It landed on the desk of Dr. Zvi Leshem, the head of the Gershom Scholem Collection at the National Library of Israel, which specializes in Kabbalah and Jewish Mysticism. Leshem alerted Dr. Yoel Finkelman, the Judaica Curator at the library, and earlier this year, after having traveled from Russia to Chicago, it came to Jerusalem where it was donated to the library — case and all.

“In donating the collection to the National Library of Israel we have fulfilled the request of the rabbi from Moscow,” said daughter Coe. 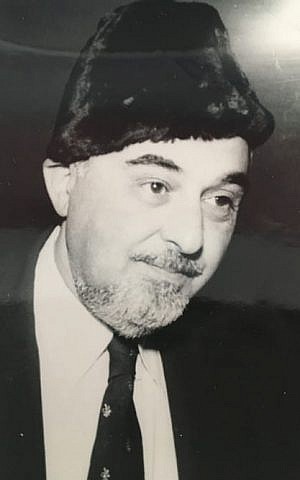 Dr. Max Brodny received the mysterious suitcase of amulets on a trip to the USSR in 1959. (courtesy)

The Times of Israel viewed the most curious collection in a holding vault a few weeks ago, prior to its treatment in an airtight, oxygen-free chamber to kill any possible creepy crawlers, a process performed ahead of its cataloging and digital imaging.

Inside the case, the library’s researchers discovered a total of 85 items, 76 of them magical amulets. There is also a “recipe book” nestled among dozens of small, rolled Hebrew scrolls — a sort of witch-doctor’s handbook. The unusual, hand-written small notebook is so apparently well-used, it is almost falling apart and must be handled with care.

One of its choicer entries reads, “If an enemy defecates in front of your house or store, burn his feces while reciting: ‘The anus of the one who did so will be burned.’ The aforementioned enemy will get blisters on his anus — this has been tested.” 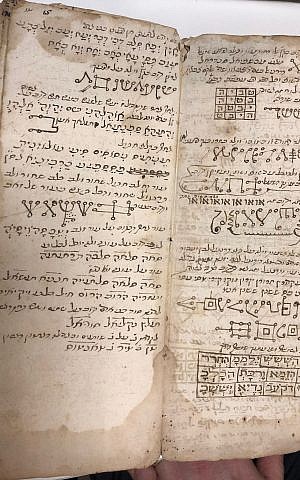 A book of spells included in the mysterious magic-filled black suitcase given to Dr. Max Brodny in Moscow in 1959. (Amanda Borschel-Dan/Times of Israel)

The book, written in a variety of hands and containing words in several languages, contains a myriad of material, from an invisibility spell to be used when robbing friends, to a cure against scorpion stings — located just above a section of special “angel writing.”

Where these scrolls and magical spells originated is still unclear, but there are several hints within the texts, curator Finkelman told The Times of Israel. “There is no obvious answer,” he said, “but we have several hypotheses.”

Based on writing style and personal names found in the texts, the library researchers believe almost all of the scrolls originated in North Africa at the end of the 19th-century or the early 20th-century, with a few of them written in the Land of Israel or elsewhere. On a couple of amulets, there is little room for doubt as it is written on the page, “Here in the Land of Israel.”

The language is overwhelmingly Hebrew, but with terms and phrases sprinkled through that were taken from Arabic, Greek and even Italian. How they arrived in Russia is unclear, but Finkelman wondered if they formed a deceased scholar’s collection, or maybe made their way there through Chabad? 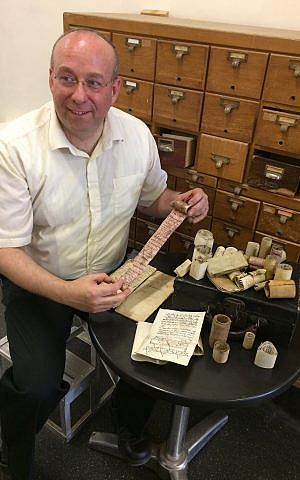 Most of the scrolls that do contain names are overwhelmingly female, said Finkelman, such as Sultana Bat Istariliya. Many summon angels — he reads off one scroll the names “Gavriel, Podiel, Lehatiel” — who were called upon to protect the bearer of the scroll, often pregnant women, from demons or to ease a childbirth.

“In some cases there are combinations of letters with no apparent meaning,” he said, including “words,” which were built by spinning an alphabet wheel of fortune. Elsewhere he points to symbols such as the “angel writing,” which only the divine creatures can read.

One scroll has a hamsa — a middle eastern hand used to ward off the evil eye — with the name of Heftsiba bat Sarah. It calls for protection against male and female ghosts, spirits, and “liliths.” Said Finkelman with a shrug, “There’s a lot of quirky sexual imagery around protecting women.”

The scrolls vary in size from a meter long to minuscule, very portable pages, which one could imagine being tucked into a wallet or pocket. Most were tightly rolled, and perhaps once carried around the neck in an amulet pouch or worn as jewelry. 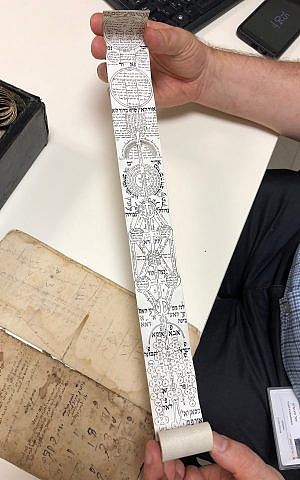 An amulet scroll, one of 85 included in the mysterious magic-filled black suitcase given to Dr. Max Brodny in Moscow in 1959. (Amanda Borschel-Dan/Times of Israel)

Finkelman quickly said there is nothing “earth shattering” among the individual items of the collection. Probably not to a scholar in the field, but as he unrolled a few more detailed scrolls, some with illustrations of the Sephirotic tree – the map of the divine structure according to the Kabbalah – this reporter couldn’t help but be impressed at the scribe’s intricate craftsmanship.

Other scrolls were likely mass produced, including invocations for potency or a healthy birth, with blanks left for names, or simply addressed using “this bearer.”

“Everyone needs protection,” said Finkelman. He believes these amulets have deep roots in Jewish culture — right through till today. “Magic is still alive and well,” he said confidently.

Jewish magic expert Gal Sofer, a doctoral student in Jewish Thought and a medical student at Ben-Gurion University, agreed with Finkelman’s assessment in conversation with The Times of Israel this week.

He viewed the collection a few weeks ago and concurred that while the items are not necessarily unique, the large number of amulets and other magical writings in it is impressive and a boon to the library. “It’s a very good collection and contains eastern and western materials,” said Sofer. 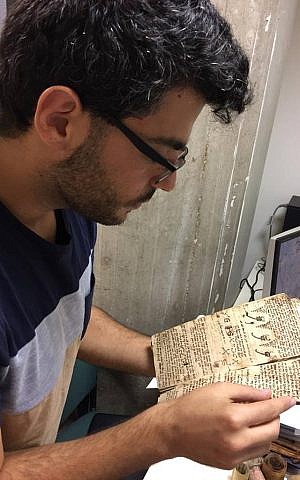 Jewish magic expert Gal Sofer reads what to do if a scorpion stings you from a witch-doctor recipe book donated to the National Library of Israel. (courtesy)

“This kind of stuff was circulated all over the world, from late antiquity until today, so it’s not rare,” said Sofer. What struck him were the more “aggressive” spells, death of an enemy and stealing from a friend.

The fact that the stealing spell would make you invisible if followed properly, didn’t phase Sofer, who has seen a lot of similar Jewish magic. It is the clearly spelled-out intentionality of taking from a friend that struck him.

“There are lots of recipes about invisibility. What is specifically interesting is this one tells you why to do it: If you want to get into the house of your friend, then do such and such. The aim itself, when it’s so explicit, I haven’t seen that before,” he said.

As a doctor-to-be, Sofer had a different perspective regarding some of the witch doctors’ cures and their efficacy. 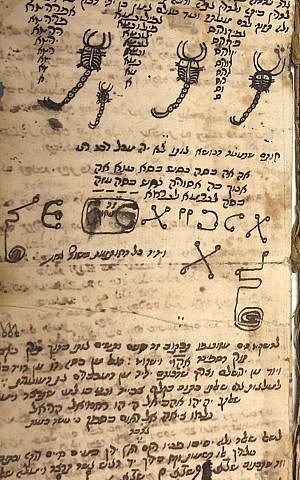 ‘Angel writing’ and how to get rid of scorpions from a book of spells included in the mysterious magic-filled black suitcase given to Dr. Max Brodny in Moscow in 1959. (Amanda Borschel-Dan/Times of Israel)

“It’s something we can ask: whether magic is efficient in any kind of way. I believe there were things that may worked,” he said, since several of the spells used materials or herbs that are connected with treatments prescribed today. “It might also have been helpful as a placebo,” he said.

However, he also noted that in psychiatry today, there are approaches in treating “cultural illnesses,” such as possession, in which professionals suggest patients speak with rabbis or priests to arrange an exorcism.

“It doesn’t mean the world is magical,” he laughed, adding that though he may want to believe it is, he’s pretty sure it’s not.

“There are thousands and thousands of such books and materials, so I’m used to it. But it’s always fun to see the ‘wow affect’ this kind of stuff has on people,” said Sofer. 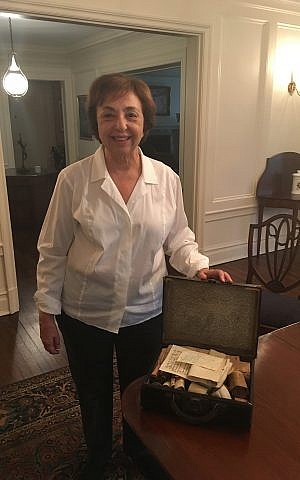 Eleanor Coe of Chicago, daughter of Dr. Max Brodny who received the mysterious suitcase of amulets on a trip to the USSR in 1959. (courtesy)

Like Finkelman, Sofer said it’s not so rare to find believers today. “People are still using magic, walking around with amulets,” he said. During rounds in the hospital, for example, he not infrequently comes across amulets similar to those in the collection in patient beds, under their pillows.

“It is something very alive in the world in general and specifically in the hospital where people actually need and rely upon it,” said Sofer.

But do these amulets really work?

Shortly after the small black suitcase left the Chicago home of Dr. Brodny’s daughter Coe, a pipe burst in her home — exactly where the scrolls had been kept for decades.