When US Ambassador Tom Nides sat down for an interview with The Times of Israel shortly after arriving in Jerusalem a year ago, he explained that his role would be to “keep things calm” in the face of “irritants” that risk upending the US-Israel relationship.

Throughout the course of 2022, Nides appeared to succeed in that effort. That year made up the bulk of the tenure of Naftali Bennett and Yair Lapid’s short-lived unity government, during which ties between Jerusalem and Washington continued to flourish, despite the lack of a breakthrough on the Palestinian front. The US issued several strongly worded rebukes of Israeli West Bank settlement announcements but there were none of the larger-scale blow-ups that strained the relationship the last time a Democrat was in the White House. Washington even found in the more moderate Israeli government a partner for advancing several relatively unprecedented measures to improve Palestinian livelihood in the West Bank and Gaza.

Last spring, the US helped Israel launch the Negev Forum to advance collaboration between the Jewish state’s old and new allies in the Arab world. Several months later, Joe Biden made his first visit as president to Israel, where new bilateral partnerships in the fields of security and technology were announced. He then traveled to Saudi Arabia, which he managed to coax into allowing Israeli airliners to fly through its skies for the first time, in what Washington characterized as a first step toward normalization between Riyadh and Jerusalem.

Having returned to power last month, Prime Minister Benjamin Netanyahu is intent on closing that elusive deal. But such an agreement appears to have gotten even more distant, given the hardline parties sharing the cabinet table with Netanyahu for his sixth term in office.

Biden administration officials have been quick to highlight the Likud leader’s insistence that he is the one in control, but his coalition partners will likely try to veer Israel toward steps that would antagonize the Palestinians and possibly the broader Arab world. The government’s guiding principles express an intention to significantly expand Israel’s presence in the West Bank and declare that the Jewish people have an “exclusive and inalienable right to all parts of the Land of Israel,” far beyond the Green Line.

Speaking to The Times of Israel on Friday, Nides appeared to recognize the challenges posed by the new government, while insisting that it would still be possible to further advance ties between Israel and the US. Still, the ambassador clarified that progress would be contingent on the calm he’s been seeking to maintain since arriving.

“The prime minister has told us he wants to do big things. And we want to do big things, too. But if we want to achieve those things, we can’t wake up and have one’s backyard on fire. So he’s going to have to manage the things we care about… effectively,” Nides said, highlighting the US administration’s commitment to preserving prospects for a two-state solution. 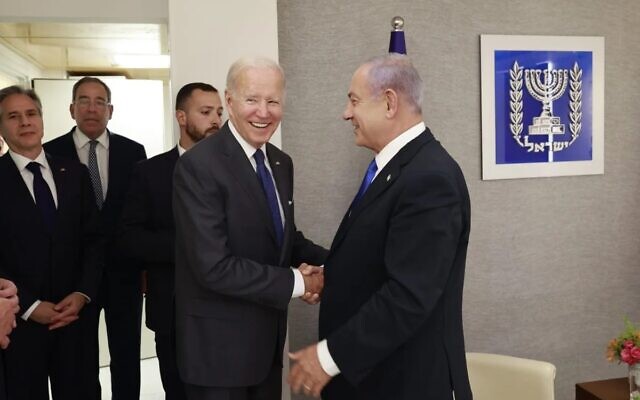 Fires in the West Bank

In the meantime, the Biden administration appears determined to maintain business as usual, even with what is widely seen as the most right-wing government in Israel’s history.

Netanyahu ‘told us that he’s got his hands on the wheel, so now he needs to drive that proverbial car’

Asked whether the administration was feeling better about the new government after Sullivan’s trip, Nides said it was too early to determine.

“We’re going to judge this on actions, not just coalition agreements or comments in the press,” he said. Netanyahu “told us that he’s got his hands on the wheel, so now he needs to drive that proverbial car. He’s got a lot of things he needs to manage to achieve the things he wants to get done.”

In addition to a normalization agreement with Saudi Arabia — which Riyadh again ruled out under the current circumstances last week — Netanyahu is looking to boost cooperation with the US vis-a-vis Iran, pushing a more aggressive approach to preventing the Islamic Republic from obtaining a nuclear weapon.

‘It would be enormously helpful if we don’t have to be dealing every day with things that we fundamentally oppose, because that just distracts us from the bigger issues that we’re trying to achieve’

Nides clarified that the Biden administration would not condition its effort on Iran on Israel’s willingness to cooperate on the Palestinian issue. “We’re going to work on Iran because ultimately that’s something that President Biden cares deeply about, both for Israel’s security and for our own security.

“But there’s only so much time in the day, so it would be enormously helpful if we don’t have to be dealing every day with things that we fundamentally oppose, because that just distracts us from the bigger issues that we’re trying to achieve,” the ambassador said. He added that Netanyahu has “been around the block multiple times and understands this better” than anyone. “We don’t have to teach this guy the things that we care about.” 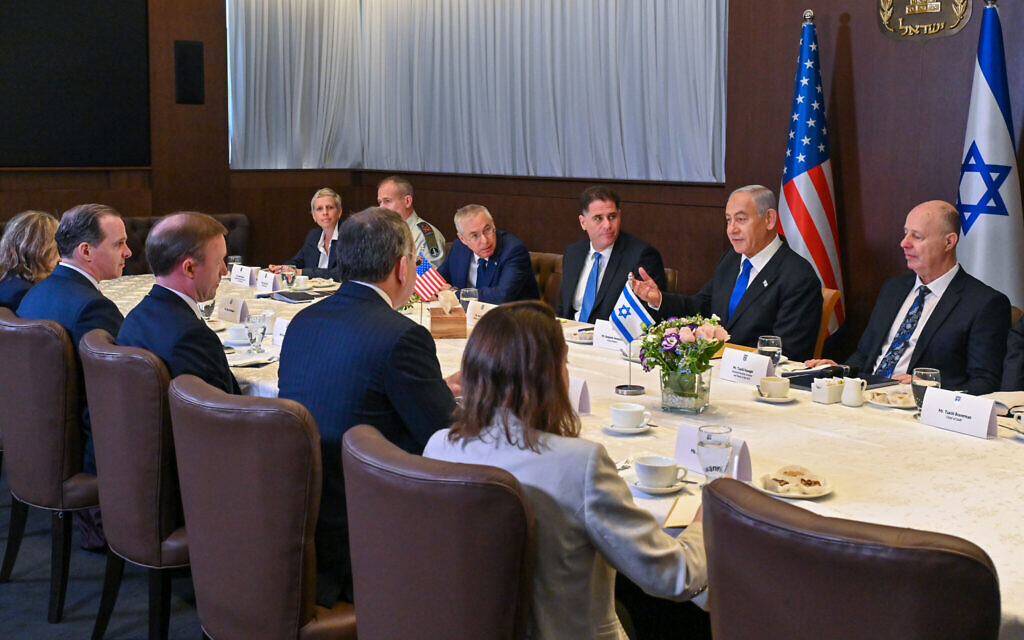 Prime Minister Benjamin Netanyahu and US National Security Adviser Jake Sullivan sit down in Jerusalem with other Israeli and US officials on January 19, 2023. (Kobi Gideon / GPO)

“We care deeply about preserving a two-state solution. And he understands [that] annexation, or even pseudo-annexation by lining up all the outposts, that [those things] don’t work for us,” Nides continued.

Indeed, hours before the interview, Netanyahu publicly backed Defense Minister Yoav Gallant, who had ordered the dismantlement of an illegal outpost that was set up overnight in the West Bank — posing an early test for the fledgling government, in which supporters of such wildcat construction hold prominent roles.

The US ambassador expressed confidence that the new government would also be willing to go along with the measures Biden promoted with the last coalition to boost the Palestinian economy, such as extending 4G cellular service to Palestinians in the West Bank and Gaza. The president announced the latter initiative during his trip to the region in July, but there has been no progress reported with regard to its implementation since, and Palestinian Authority officials have expressed skepticism over the likelihood that Israel will ever greenlight the project.

Nonetheless, Nides said he saw “no indications” of the new government walking back the commitments made by the previous one on that issue. Netanyahu “told us he took down a lot of the checkpoints. I think he believes in [a] strong economy for the Palestinians.”

“We’ll see what that means in practice,” the ambassador continued. “I’m sure there are other people in his government who feel differently.”

Fires on the Temple Mount

In addition to lowering the flames in Israel’s West Bank “backyard,” Nides stressed that doing the same on Jerusalem’s flashpoint Temple Mount was also a top priority for the administration.

So far that front hasn’t been a blazing success, after far-right National Security Minister Itamar Ben Gvir visited the compound at the beginning of the month, sparking a massive international uproar and even an emergency meeting of the UN Security Council.

The US embassy in Israel issued a statement at the time, saying, “Ambassador Nides has been very clear in conversations with the Israeli government on the issue of preserving the status quo in Jerusalem’s holy sites. Actions that prevent that are unacceptable.”

Pressed to specify whether he considered Ben Gvir’s visit a violation of the status quo — under which Muslims are allowed to pray at the site they refer to as the Noble Sanctuary, while non-Muslims can only visit — Nides balked. “I’m not here to define whether just going up and going down is [a violation of the] status quo or not. My goal here is to keep calm. That would suggest to people that I’m not supportive of trying to do things to rile people up.” 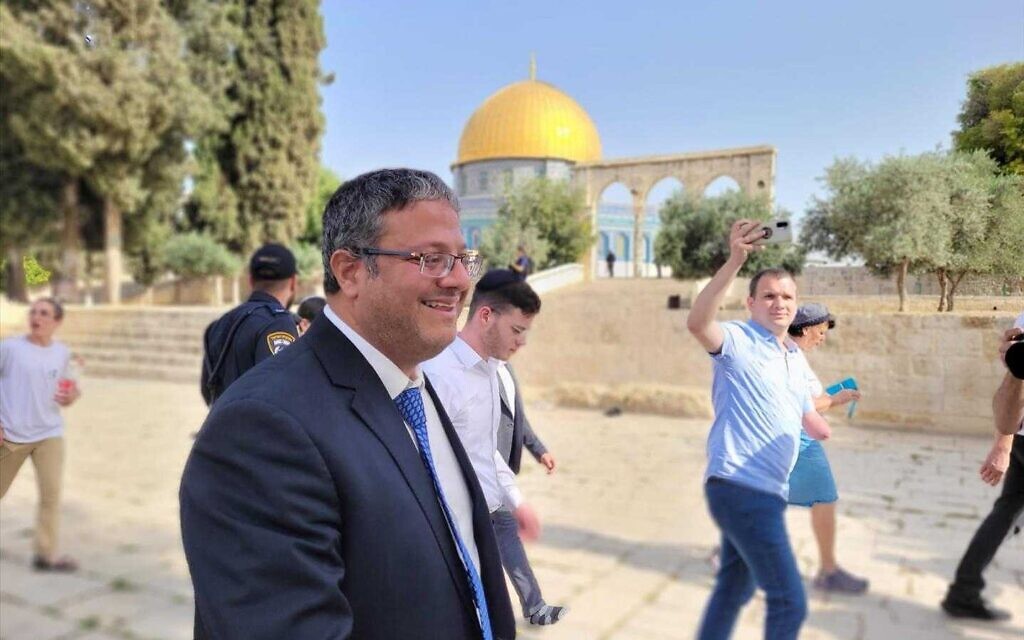 “We weren’t supportive of that visit, given the context,” he added, noting how Ben Gvir had previously campaigned on reversing the status quo on the Temple Mount to allow Jews to pray there. The national security minister has not called for following through on that effort since entering office, though he has denounced what he describes as the “racist” policies governing the site.

Nides said that he received assurances that Netanyahu will preserve the status quo at the Temple Mount, but the ambassador acknowledged that those did not include a commitment that such visits by Ben Gvir would cease moving forward.

While Biden administration officials might have planned to limit their conversations with the Netanyahu government to larger foreign policy issues, the news cycle in Israel seems to have other plans.

Sullivan also raised during his meeting with Netanyahu the new coalition’s highly controversial plan to significantly curtail the power of the judicial branch.

A week earlier, Nides indicated that the US would not weigh in on the matter, telling the Kan public broadcaster, “The Israeli people don’t want to be lectured by America… Our job is not to impose our will on every decision this government makes vis-a-vis issues like judicial reform.” 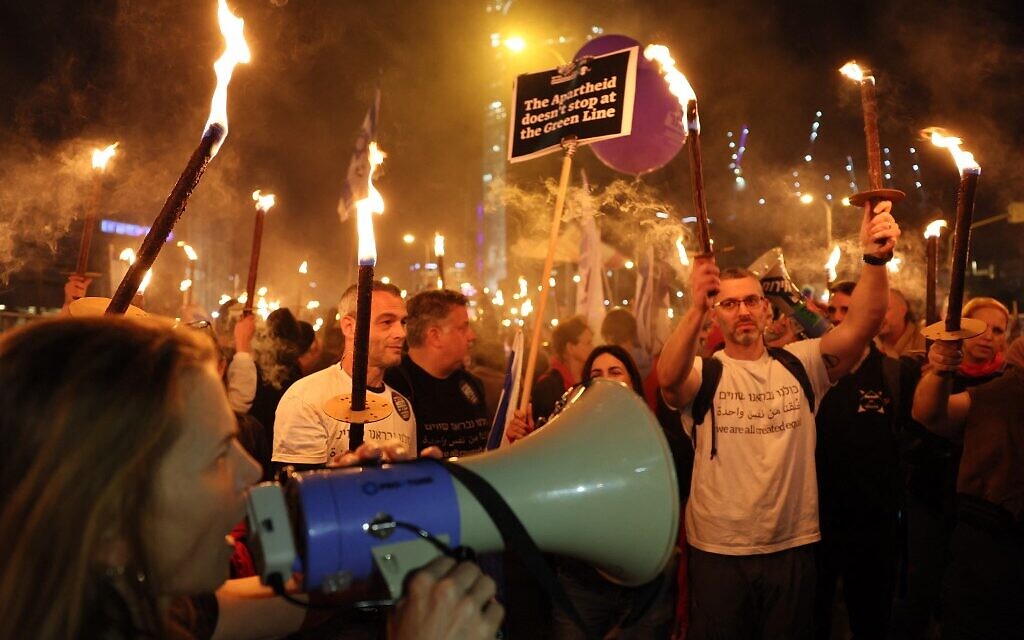 The ambassador clarified in our interview that US officials would still talk with their Israeli counterparts about “shared values and the importance of strong democratic institutions.”

A strong Israeli democracy “gives us the ability to defend Israel at the UN,” he said, highlighting a point used by detractors of the government’s judicial overhaul, who warn that targeting the High Court of Justice will hamper Jerusalem’s ability to defend itself in international tribunals.

“What we’re not doing though — certainly not at this point — is telling them how to construct their judicial system,” Nides added.

Nides spoke to The Times of Israel days before the State Department was slated to release figures showing the visa application rejection rates of countries around the globe. If Israel’s rate falls below three percent, it will for the first time qualify for entry into the US Visa Waiver Program.

Israel will still need to pass three pieces of necessary legislation in a short period of time, but the Netanyahu government will likely be determined to work fast given the widespread support for visa-free travel to the US.

Securing an appointment at the US embassy has not gotten much easier, even as the pandemic-induced backlog shrinks, and some Israelis have resorted to paying intermediaries in order to wait less time for consular meetings. 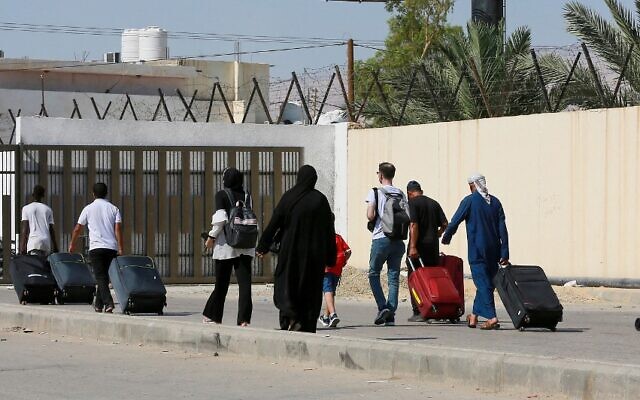 Passengers arrive on the Jordanian side of the Allenby Bridge crossing between the West Bank and Jordan on July 19, 2022. (Khalil Mazraawi/AFP)

Nides was unable to comment on the phenomenon but said it was another reason why he was working for Israel to become the 41st country in the VWP.

However, he said, Israel would also have to ensure “reciprocity” for Palestinian-Americans, who currently face many hurdles in traveling through Ben Gurion Airport and have largely been forced to use the Allenby Crossing between the West Bank and Jordan before flying out of Amman.

“If Israelis want to be in the Visa Waiver Program, they’re going to abide by [reciprocity]. It’s the right thing to do, and it’s got to be done or the visa waiver won’t happen,” he added.