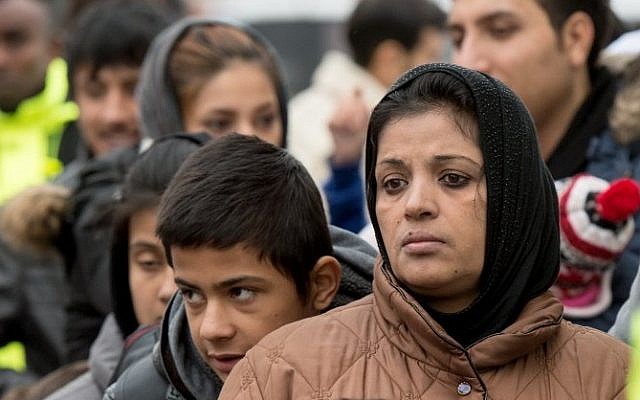 Illustrative: Muslim asylum seekers wait for their registration after arriving at a center for refugees in Giessen, Germany, on December 2, 2015 (AFP/DPA/Boris Roessler)

More than 1,000 US rabbis have signed a letter calling on elected officials to welcome refugees.

The letter, sponsored by HIAS, the lead Jewish body dealing with immigration issues, said the rabbis are “alarmed to see so many politicians declaring their opposition to welcoming refugees.”

Rabbis in 46 states as well as Washington, DC, are among the signers. A condensed version of the letter and the full list of rabbis who signed on to it will appear in the print editions of Politico and the daily Forward on Thursday.

“Since its founding, the United States has offered refuge and protection to the world’s most vulnerable,” the letter says. “Time and time again, those refugees were Jews. Whether they were fleeing pogroms in Tzarist Russia, the horrors of the Holocaust or persecution in Soviet Russia or Iran, our relatives and friends found safety on these shores.

“Last month’s heartbreaking attacks in Paris and Beirut are being cited as reasons to deny entry to people who are themselves victims of terror. And in those comments, we, as Jewish leaders, see one of the darker moments of our history repeating itself,” the letter continues, citing the US turning away the SS St. Louis in 1939, sending some 900 Jews back to Europe; many were killed by the Nazis.

The letter urges elected officials to support legislation to resettle refugees and oppose any measures that would “actually or effectively halt resettlement or prohibit or restrict funding for any groups of refugees.”