The KKL-JNF Jewish National Fund is formulating an ambitious 25-year national strategic plan to add hundreds of thousands of dunams to the country’s forests and to protect the woods by law.

The plan will seek to define forests in the widest possible sense, map areas for conservation — both planted and naturally occurring forests — and identify spaces not zoned for other purposes where additional trees can be planted by KKL and other groups.

KKL was established in 1901 to acquire land on which a Jewish state could be established. Today, it acts as owner-custodian for 13% of state lands, much of it now filled with planted trees.

When it was founded, there were just 14,000 dunams (3,500 acres) of woodland across the area that would eventually become Israel. The organization has since raised this figure to 1.55 million dunams (3.8 million acres — some but not all of it on the land it actually owns).

A further 500,000 dunams (125,000 acres) have been planted by other organizations and bodies, bringing the total forested area to two million dunams. 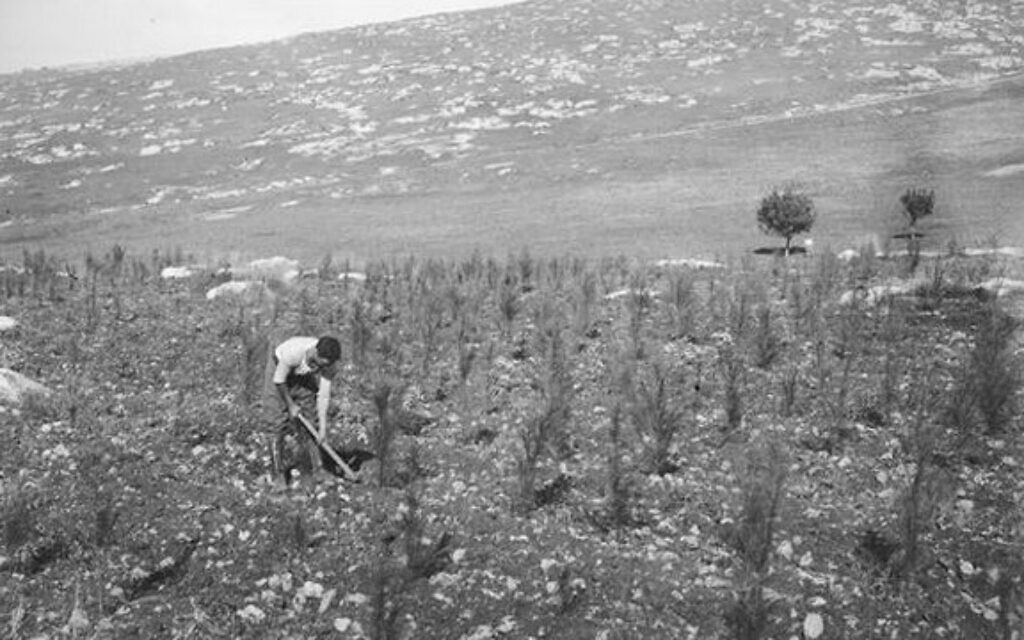 KKL forests are popular sites for hiking, biking, picnics, and other recreational activities, and offer much sought-after green space.

But they face a number of threats — particularly from development, as policy makers seeking to address a housing crisis approve projects that nibble away at the edges of forests, Noah Tal, KKL’s head of planning, told The Times of Israel.

“We’re battling for every dunam. Forests aren’t just vegetation cover. We have to show how critical they are for nature and climate change, and human quality of life,” she said. 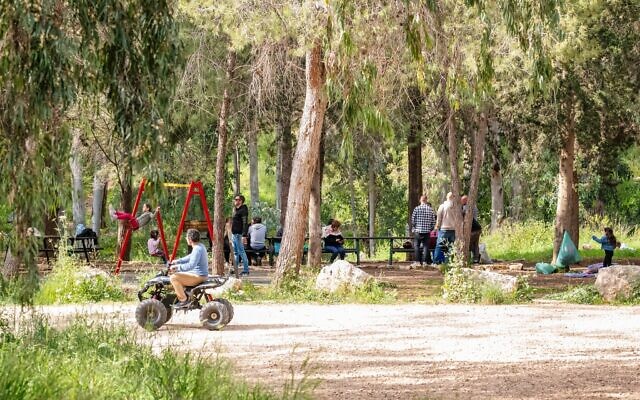 “When we saw what had happened in such a short period, we realized how important it is to protect the forests. Development is necessary and KKL has always supported settling people. The question is how and where,” Tal said. 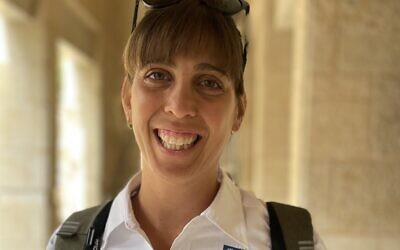 The KKL is currently working to put the plan together, and in the coming months it will begin to consult with ministries, environmental groups, and the Israel Nature and Parks Authority — which manages nature reserves and national heritage parks covering 5.5 million dunams (1.4 million acres). The organization began the process a year ago and hopes to finish it within a year.

According to Tal, the entire organization is involved at some level in the strategic plan, while five panels have been set up to deal with specific issues — planning, forestry (ecosystems, biodiversity, planting, etc.), infrastructure, the public and public involvement, and climate change.

The focus is on forests as a single nationwide system whose needs must be balanced with those of the nation’s other priorities, Tal explained. The strategic plan is intended to reflect policy, from general principles to a set of considerations that the individual forester will be expected to consider in future planning.

From the KKL’s point of view, the need for a clear plan was strengthened by the formulation of National Masterplan Plan 1, approved by the government in February 2020.

The plan, known as TAMA 1, combined many previous subject-specific masterplans, including one dealing with forestry and afforestation, into a simpler, single set of documents.

It plotted and provided instructions to planners on everything from water, gas, solar energy, and waste installations, to roads and train tracks, beaches, streams, and protected open areas, among them forests.

TAMA 1 strengthened the protection of forests and open space in general by limiting the percentage that can be rezoned for development to no more than 15%.

But it also shrank the definitions of a forest and gave planners to understand that natural woodland was to be prioritized over planted forests, Tal said, limiting the ability of KKL professionals to actively manage forests, which are dynamic.

Planning committees have interpreted the document as giving wider leeway to rezone areas of planted forests, she went on. 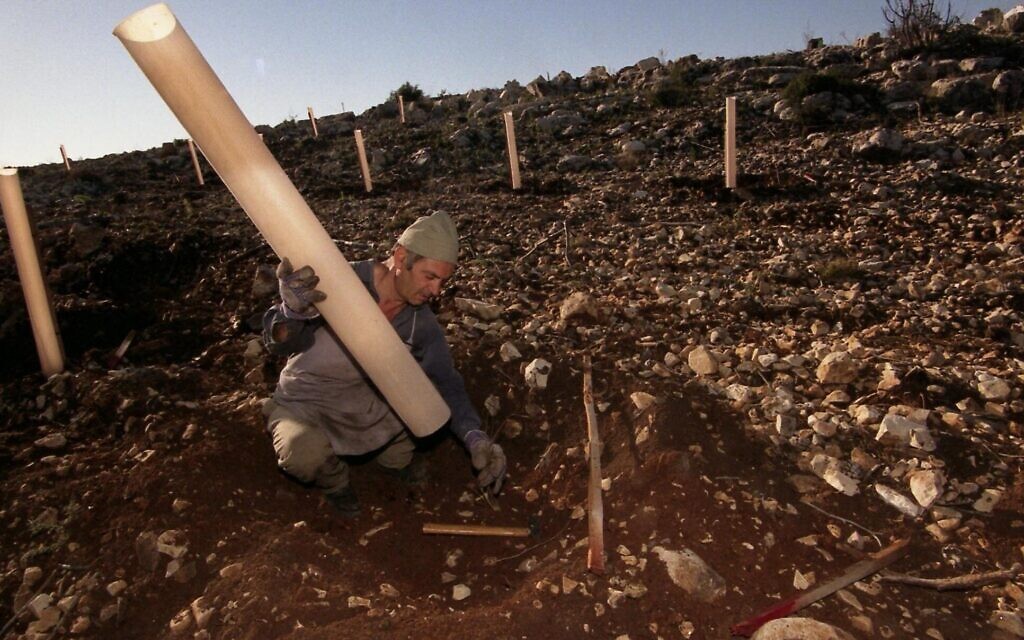 A KKL worker protects a young sapling in a sleeve while replanting in Neve Ilan, just outside of Jerusalem, after a large forest fire. (Joe Malcolm)

Tal said TAMA 1 failed to recognize the professionalism and key role of the organization in managing forests.

KKL doesn’t just buy trees, stick them into the ground and leave, she said, but studies areas designated for forestry closely, including within the context of their surroundings and ecological corridors that enable animals and plants to move between protected areas.

“Before any plan, we survey the ecology of the site over four seasons, the archaeology, demand, accessibility,” she said. “We talk with the INPA [Israel Nature and Parks Authority] and local authorities… There’s a whole organized process.”

She insisted that KKL’s planted forests were no less rich in biodiversity and no less important as ecosystems than the natural woodlands and other sites managed by the Parks Authority. She noted that unlike those sites, KKL forests were open around the clock and entry was free. 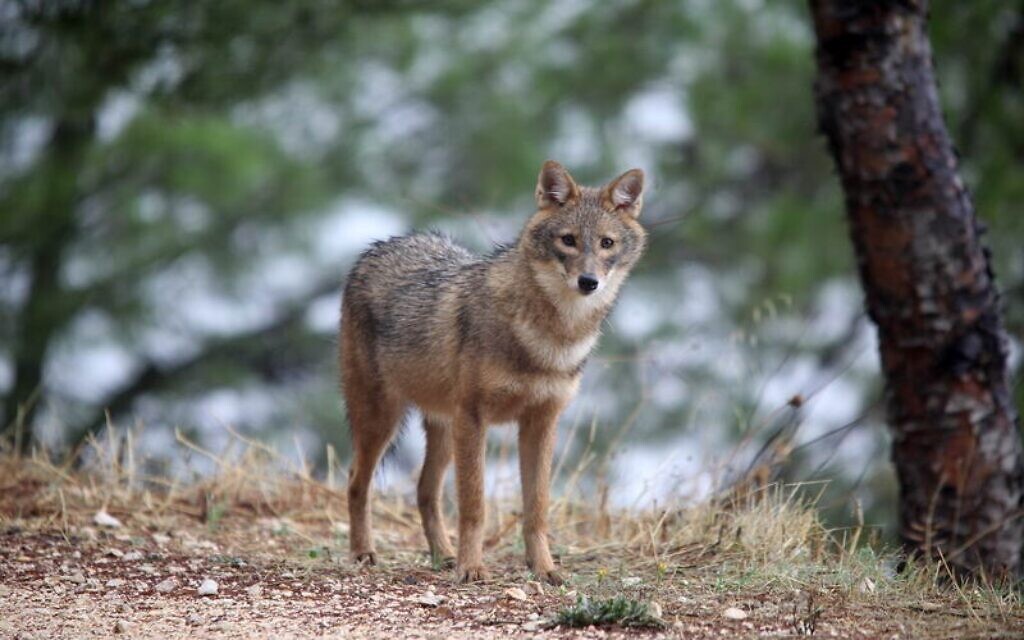 A jackal at the KKL’s Biriya Forest, the largest planted forest in the Galilee in northern Israel. (Avi Hirshfield)

The planning team is also surveying international agreements signed by Israel, according to which forest cover must be increased by 3%.

Moti Kaplan, a leading planner whose office was tasked with putting together TAMA 1, has also been contracted to head up the new KKL strategic plan. 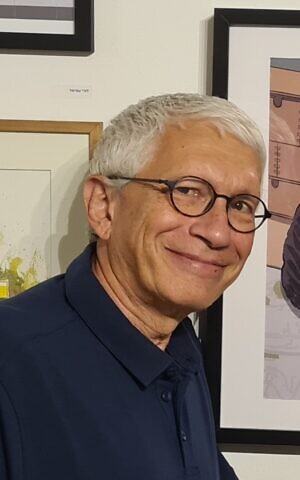 He was previously responsible for the national master plans for forestry and afforestation and for nature reserves and national parks, which he melded into TAMA 1, along with other land uses, such as infrastructure.

“The level of detail [in the forestry plan] was different from TAMA 1, where we also had to integrate waste and energy and power stations and include everything on one map with a short set of instructions,” he said.

There wasn’t room to look at all the functions that the planted forest fulfills, he went on, and he now realized that it was no less important than other more natural areas.

“Now that our focus is on forests, we’ll be able to look at it in a more detailed way,” he said. “You see things from here that you don’t see from there.”

One example of an area where the KKL is hoping to improve on TAMA 1 is a rule that allows, with certain limitations, for infrastructure to be laid through forests.

That rule is at the center of an ongoing dispute between the Gezer Regional Council in central Israel and the Israel Electric Corporation, which wants to erect massive pylons for a high-voltage cable that will cut through the first park the KKL ever established in Israel — Hulda Forest. The move will require cutting down hundreds of trees, some of them more than a century old. 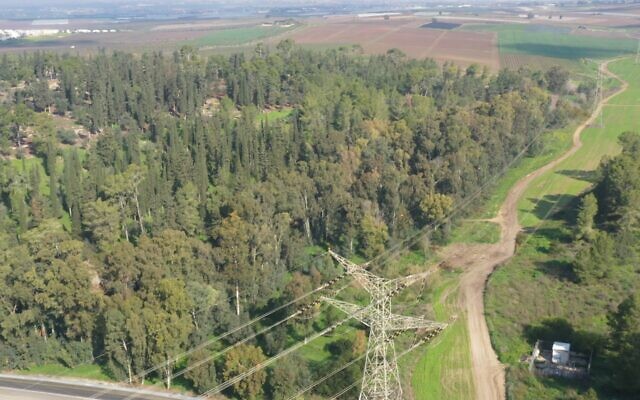 High-voltage pylons erected in the Hulda Forest in the 1990s, alongside which an additional line of pylons and cables are to be put up. (Gezer Regional Council)

To deal with the issue, the KKL has set up a panel to look specifically at infrastructure cut-throughs and how to minimize damage to nature and the visitor experience.

A plan isn’t enough to protect open spaces unless backed by legislation, though.

“I aim to protect open places,” Kaplan said, “and whatever opportunity I have to protect them by law, I’ll do it. If an area doesn’t have statutory protection, it will disappear.”

Protection via legislation would be essentially watertight, he said. “The government can change policy, but in the civil statutory world, it’s almost impossible [to break].”

The KKL’s Tal called for the Knesset to pass legislation protecting forests, similar to a law passed in 1998 that protects nature reserves and national parks. She said KKL would seek a place on planning and zoning boards to represent forestry interests and concerns.

A lot hangs on the definition of a forest, of which there are many. 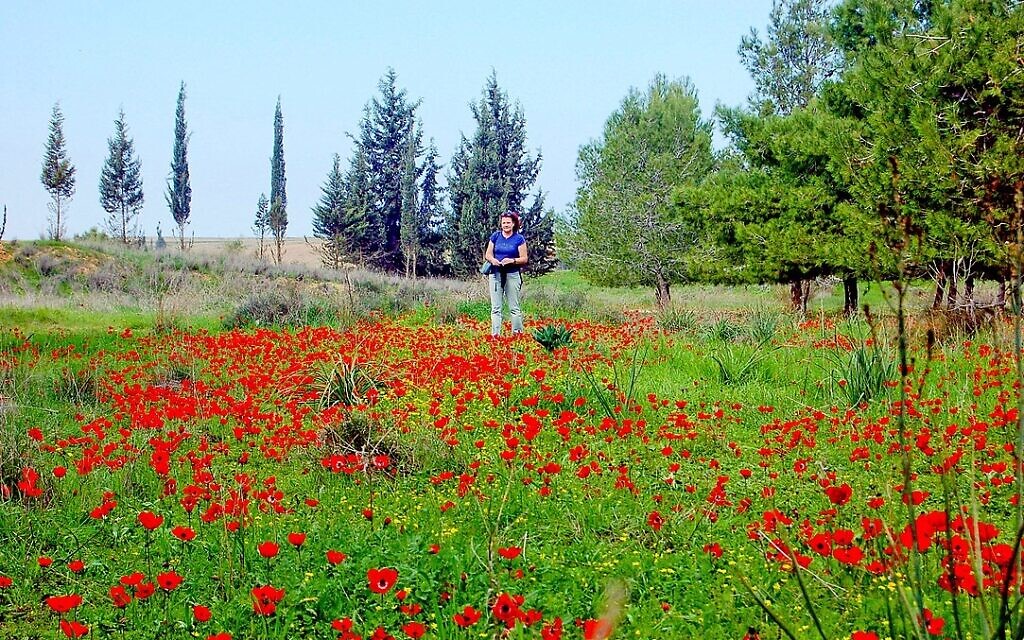 While it is still figuring out what it will count as forest, KKL is looking at a definition formulated by the United Nations Food and Agriculture Organization as a guide. The FAO defines forests as “land spanning more than 0.5 hectares (1.25 acres) with trees higher than five meters (16 feet) and a canopy cover of more than 10%, or trees able to reach these thresholds in situ.”

Such an interpretation, far as it may sound from the sylvan tracts in the collective imagination, could embrace anything from the traditional planted pine and cypress stands so closely associated with the organization to vacant lots with stands of trees, orchards on traditional stone terraces, streams and the floodplains around them — which absorb rainwater and help to prevent floods — bare rocky hillsides where trees once grew, and deserts dotted with wild acacia trees.

“We’re still refining the definition of forest, which incorporates many ecosystems,” Kaplan said.

Kaplan, who also works in tropical areas of the world with the UN Development Program, said he didn’t know of any country that had not rezoned forested areas for development, but that Israel was one of the only ones that adds forest every year, under the KKL’s leadership. 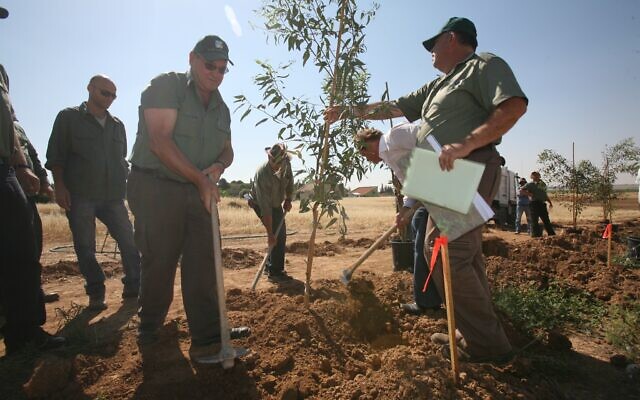 KKL workers plant trees in the sandy soil of Kibbutz Mefalsim, located in the northwest Negev desert near to the Gaza border. The trees are planted to hide the kibbutz from the view of rocket launchers in the Gaza Strip close by. (KKL Photographers Association)

Israeli agriculture was admired all over the world, he asserted.

“We need to be a world model for foresting — mainly in transition areas, but also desert environments,” he said.

Israel’s transition areas are located between its deserts in the south and its Mediterranean belt, which roughly extends along a rocky spine from the north of the country down to the edge of the northern Negev.

Drylands are found throughout the world and evidence suggests that they are expanding. Desertification is a major environmental issue that harms the land’s productivity, contributing to poverty. 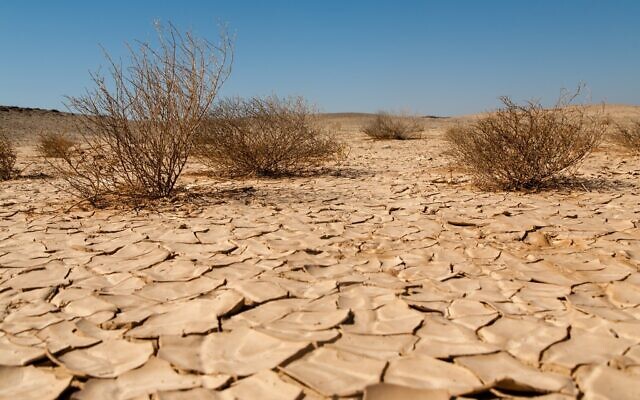 Much of the KKL’s planting in the Negev desert in southern Israel has been criticized by the Society for the Protection of Nature in Israel. A report published in English three years ago warned that forests planned for open areas of Israel, where trees are naturally scarce, could harm biodiversity and contravene Israel’s international commitment to biodiversity conservation.

Tal said the organization was “always learning and improving” but would not accept a ban on planting trees in the transition zone. “The question is how, how much, and which species.”

But Kaplan noted that forests were also needed in areas where people live, not just the edges of civilization. 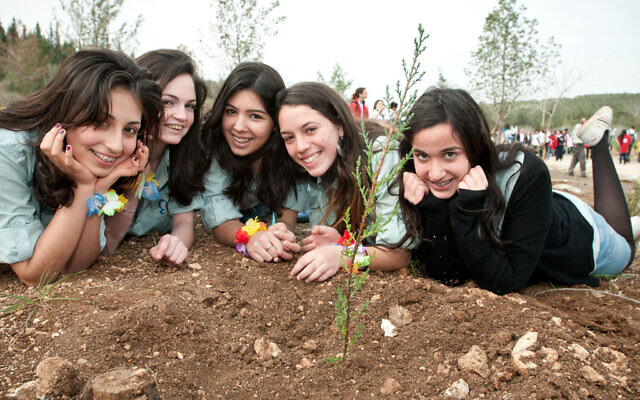 “We’re looking at areas of demand. It’s huge in the center of the country. Whoever has a car can drive to the Ben Shemen Forest,” he said, referring to the Tel Aviv area, where millions live, and a forested area in the foothills just to the east with few public transportation links.

“We need to ensure that every place in Israel has a piece of forest that’s easily accessible by public transportation, particularly on the public holidays.”