Time ends when a child dies, as it does in the dark heart of a galaxy. The eternal moment, when I dropped Niot off at the bus stop at Fureidis Junction, and he opened the car door to receive a farewell assurance, ask a last question, when I touched him whole for the final time.

No child knows it until he himself becomes a father or a mother. No child really grasps that he weighs billions of solar masses and that it is only his life that keeps the weight from collapsing into a black hole from which no light can ever escape. Life has that power. It pushes back against gravity.

The end of time has many symptoms. In dreams, Niot appears at all ages, sometimes a first-grader; sometimes at twelve, trying on identities for size; sometimes as he was at the end, twenty and tall and strong. In photograph albums we see him as if time, instead of proceeding as an arrow, zigzags from one year to another. It shows not the progression of growth but the puzzle of identity, how the Niot who went to sleep at night was the same Niot who woke up the next morning, how the soldier was also the infant, even though they had no atoms in common.

He was worried that the bus wouldn’t come. It was the night after the Seder. We’d spent the holiday with friends in Zichron Ya’akov, as we did every year. Niot was in the army, but on medical leave, a few minor issues that needed to be taken care of before he continued his service. He had made plans with three friends to go scuba diving in Eilat. They were to leave early the next morning, so he needed to get back to Jerusalem that night. There’s an express bus from further north that stops at Fureidis Junction and then goes non-stop to Jerusalem. I drove him down to the bus stop. He sat next to me in the car. When we got there, he got out and took his backpack from the trunk. I could have stayed until the bus came, but there seemed no point, at the time. He opened the passenger door, and I saw his face, eager to be on his way but also worried that he wasn’t in the right place. I pointed to the number on the sign and assured him that all would be well. If there were a problem, he could call. I left. A few minutes later, after I was gone, the bus came. That face, ringed by the night, outside of time.

Time ends, but it has bulges. The biggest bulge comes as the wildflowers bloom, at the onset of spring. As the world renews itself and love emerges from winter slumber, we feel the pull of 6.5 billion solar masses. It was just at this time, at the beginning of the month that has Pesach at its middle, that the photograph of the black hole appeared in the morning newspaper and on my computer screen. The dark spot sucking all around into it. A galactic center from which no matter or energy escapes. I gazed at it in surprise. The universe cannot possibly know how I feel.

How strange, this photograph of something that cannot be seen. We live on a small planet, orbiting a middling star on the edge of a galaxy, one of a hundred billion such galaxies in the known universe. Each galaxy glows with the light of billons of stars, and at the center of each one is the unseeable heart around which it spins. The photograph of the black hole is actually not what it claims to be. What the photograph shows is a disk of matter swirling around the hole, so energized by its gravity that it emits enough light to be seen here on earth, 53 million light years away. The hole itself is the shadow, the gloom, the wraith that cannot be seen in the center, the place of collapse from which no light can escape and where time does not exist. 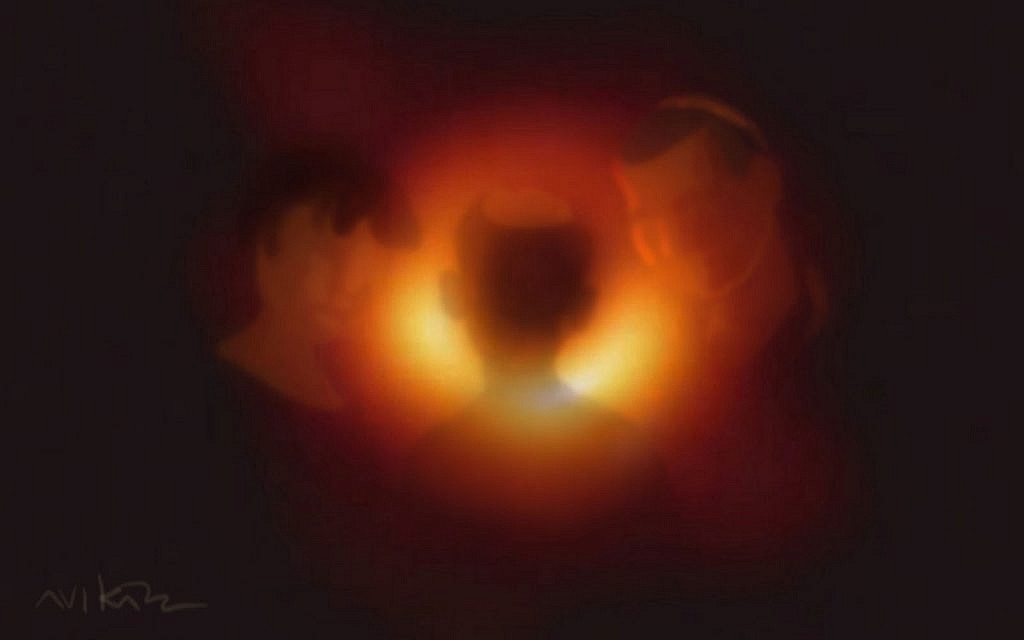 And the year revolves around Pesach, a shell of life that returns each year to the day on which time ends.

Families move in complex orbits not charted by Einstein. For each child is the center of gravity, each simultaneously the full focus of his parents. When one of those centers vanishes, the orbits remain, fossils of what once was, but with many perturbations, some visible and some so imperceptible that they are felt only by those close by.

Earlier that afternoon, Niot lay on a couch, reading, entirely at peace. He’d been annoyed and pressured by his injuries, which had kept him from going into NCO course with some of his friends. Each time, when it looked as if he was ready to go back to his unit, some other minor ailment was discovered, embarrassing him. But the sick days meant he could spend the holiday with us and go scuba diving with his friends. He lay on the couch, entirely absorbed in a book. I had never seen him read so intently before, and with so much relaxation. Reading had not come to him easily. Another of the timeless scenes I see all the time is me reading to him each night, when he was at an age far beyond bedtime stories. These were moments of intimacy and shared light. Looking at my son, I commented to my friend David: “Whoever thought I would see this.” I see it always now, as if it never ended.

A black hole swallows up all mass and energy that gets into the maw of its gravitational field. But Stephen Hawking, the physicist, discovered that black holes can lose mass and, given enough time—more than the entire life of the universe except in the case of very small black holes—can end up as massless points. It’s complicated, but one way this might happen is that pairs of particles that form spontaneously from the vacuum of space, just on the edge of the black hole. can have different fates, with one falling into the hole and the other sailing away, taking a tiny bit of the hole’s mass and energy with it. This happens with physical black holes, out there in galaxies, but not with parents, whose black holes never grow smaller.

Time ends when a child dies. Because when a child dies, his parents lose their energy and fall past the event horizon into a black hole. But around the hole, in the photograph, there is a ring of light.

Niot’s memory helps Israeli teenagers with learning difficulties through The Niot Project. To learn how to donate, click here.