Haim Watzman offers a prophetic Necessary Story. Except that the prophet is a cat

I give the seraph with the live coal my most bellicose stare, the kind I usually save for when King of the Refuse Heap Ahaz perches himself on top of our frog-dumpster at 15 Nahum Lifshitz Street to make a speech. I’m not sure what the thing with the live coal is about, but it doesn’t look good.

“Also,” I point out, “I live among cats of unclean lips. We all eat garbage.”

The seraph keeps flapping its wings and its arms and its legs and gets closer and closer. “Your eyes have beheld the King Lord of Hosts,” she points out. “No other cat has ever been honored in this way.”

What can I do? A feral cat has about as much chance of scaring off a seraph as a Rottweiler. Before I know it, she’s shoved the coal onto my lips and I’m wailing like G’veret Elbaz’s canine behemoth when she sees the moon. 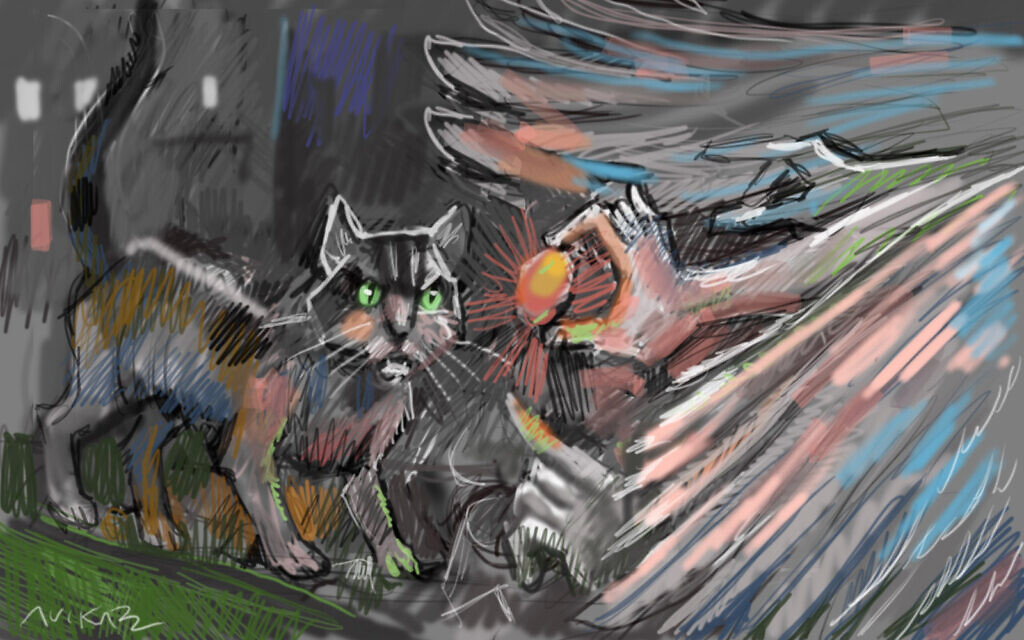 The seraph smirks. “Now that this has touched your lips, your guilt shall depart, and your sin be purged away.”

“Did I ask to be purged?” I scream at her. “I get all the purging I need when I eat the kusah mahshi that G’veret Elbaz tosses out after leaving it out of the refrigerator in the summer.”

Then I hear the voice of God saying, “Whom shall I send? Who will go for us?”

The seraph clears her throat. “We have a cat.”

“A cat?” The Lord sounds doubtful.

The seraph rubs her multiple limbs together nervously. “You asked for a feline. That’s what you asked for.”

“You said you need to send a message to the cats of your holy city, Jerusalem.”

“Goes by the name of Isaeow.”

“That’s the name my family uses daily,” I stage whisper at the seraph as best I can through my charred lips. “God can call me Izzy.”

“Izzy.” The Lord of Hosts turns to me without enthusiasm. “I have a little job for you.”

Ahaz gives a speech at sunset, just as we are chowing down on the latest slops. He climbs up to the apex of the dumpster, pushes aside a lump of dried oatmeal with a white paw, licks the paw, and grooms his whiskers and his battleship-gray face.

“I have great respect for the cats of this dumpster,” he declares. “It is a great dumpster!”

I look around and hear purrs of approval.

His face darkens and the pupils of his green eyes narrowed. “But,” he intones ominously, “there is a dumpster within the dumpster that is seeking to undermine us. There are cats who, instead of having the best interests of our dumpster in mind, are more concerned about the welfare of the cats in the dumpster across from 11 Nahum Lifshitz!” And he looks straight at me.

“Hey, all I did was write in The Dumpster Times that it’s best to stay away from G’veret Elbaz’s stuffed squash.”

Ahaz surveys his audience. “That’s classified information that our little journalist here has now made available to our enemies.”

Whiskers stiffen and claws are bared.

“Information which no doubt leaked to you by a source here in the dumpster with whom you have a quid pro quo relationship.”

“A leak? I’ve eaten the kusah mahshi! We all have! Everyone knows it!”

“Tell that to the police, Izzy.”

The Holy One Blessed Be He sighs and the doorposts shake and the divine court fills with smoke.

I cough as politely as I can.

“Tell me about you and your friends.”

The divine countenance brightens. At least, I think it does, not that I can see it with all the smoke and seraphs flitting around like mosquitoes.

“That’s good. That’s good. Listen, I have a message for you to deliver to the cats of my Holy City. I am very angry at them.”

“Nothing. Just this lady with a dog who could play The Hulk.”

“I gave up on the people long ago,” God says. “But you cats? You’re so cute! All those photos on Instagram. Where does the evil come from?”

I’m not sure how to reply to that. I need to choose my words carefully. This is God, after all.

“It’s like the evil impulse,” the seraph who burned me offers helpfully.

Ahaz puts his paw around my shoulder. “Listen, Izzy. We’ve known each other a long time. Remember, in the army, we ate from the same garbage pail.”

This is not leading to anything good.

“What kind of deal?”

“What bothers me is all the negative stuff in The Dumpster Times. Do I deserve this? Given all I’ve done for our security and our economy? It’s like you’re out to get me.”

I shrug. “You know what they say. Garbage in, garbage out.”

“Look, tell the cats that I’m the best. And I’ll let you know when G’veret Elbaz puts her ground beef out on the windowsill to defrost.”

I’m about to make a grand statement of principle, but at that very moment G’veret Elbaz dumps her garbage pail on top of us. Ahaz elegantly leaps out onto the sidewalk, leaving me under a pile of rotten leftovers.

“Whatever,” God says. “Listen, this is what I want you to do. I want you to take a message from me to the cats of Jerusalem. I want you to rebuke them for their selfishness, for spending their days eating and their nights copulating while stray cats starve and kittens are pecked to death by ravens.”

“But here’s the thing,” God says. “I really want to punish them.”

He may be God, but he’s being obscure. Maybe that’s how he got the job.

“I want you to tell them, but make sure they don’t understand. They should see, but not grasp. Dull the cats’ minds, stop up their ears, seal their eyes. Because if the cats see with their eyes, and hear with their ears, and grasp with their minds …”

“What about smell with their noses?”

“Right, that too. If they do all that, they’ll repent and save themselves.”

I wave a paw at him. “My Lord, I know these cats. And, believe me, you have nothing to worry about.”

“Leave out the editorial comments,” the seraph reprimands me. “Just do as you’re told.”

“I’m a journalist. The only time anyone believes me is when I tell them something that they think they know already.”

The seraph holds out a ream of paper. “Sign here.”

I sign. I mean, when it’s God, you can’t say you want to have a lawyer go over it first.

“Can I just ask one question?”

The seraph indicates that I may.

“How long, my Lord? How long am I supposed to do this?”

“Oh,” God says. “I thought I mentioned that. Until the dumpsters lie waste without inhabitants.”

I roll my eyes.

“Do not roll your eyes at God,” the seraph snaps.

“But the waste is why the cats are there. Doesn’t he know that?”

In the next edition of The Dumpster Times I offer a full account of my journey to heaven, my encounter with the Lord of Hosts, and my appointment as his prophet to the cats of Jerusalem.

Ahaz is in stitches. “Hey, cats, Izzy says he’s been to heaven! No one will believe that in a thousand years!”

The cats are laughing so loudly that they don’t hear the beep-beep of the garbage truck backing up. Its mechanical arms extend, lift the dumpster in the air, and turn it over. All our sustenance plummets into the truck and the dumpster, when it is lowered back into place, is a barren desert. We’ll all fast for a day, until more garbage comes, and then we’ll gorge ourselves until the next cataclysm.