The wail of fire engine sirens could be heard for miles around as the echo of shouting crowds reverberated throughout the southern city of Be’er Sheva. However, the commotion wasn’t caused by an emergency but rather a joyous celebration as Israel’s firefighters jubilantly received a Torah gifted through Jewish National Fund-USA’s BeInscribed initiative.

The unique initiative has enabled Jews worldwide to become a part of history as they sponsor the inscription of a letter, word, or portion in a Torah written on top of the ancient Jewish fortress of Masada.

When Rabbi Haim Perel, the chief rabbi of Israel’s Fire and Rescue Authority, first learned that a Torah would be gifted by Jewish National Fund-USA to h 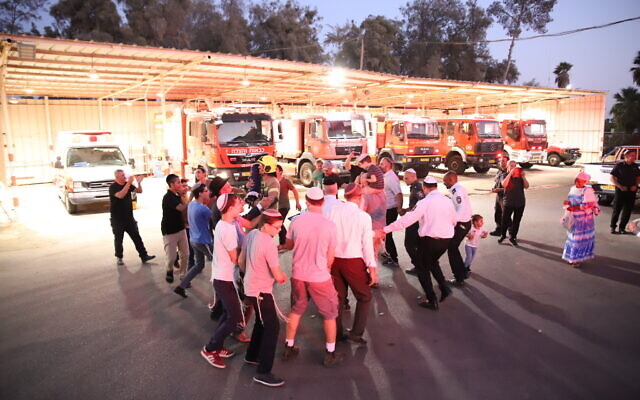 Fire fighters and local community members dance with the Torah

is local firehouse, he was overcome with emotion. “The provision of this Torah means we’re entering a new rhythm,” explained Rabbi Perel. “It was vital for our fire station to have a synagogue where people could pray and hold minyanim. Now, thanks to Jewish National Fund-USA, it also has a Torah!”

The gifting ceremony was attended by local firefighters, school children, and other community members, who danced with the Torah before placing it in the synagogue’s Ark.

Moshe Amar, commander of the Be’er Sheva fire station, echoed Rabbi Perel’s sentiment. “This is such an exciting moment! And it is made all the more special because we are about to celebrate Simchat Torah. We were just a regular fire station in Be’er Sheva, however, now we are so much more. We’ve succeeded in building a synagogue, and this Torah makes it complete. All I can say is, ‘Am Yisrael Chai!’” 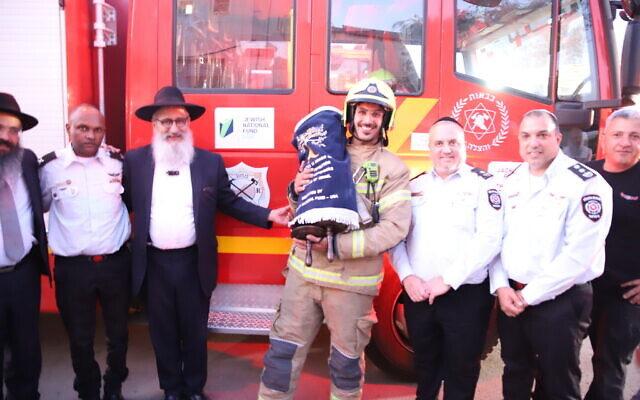 In addition to the recently donated Torah, Jewish National Fund-USA has continued to provide fire trucks, fire stations, and other firefighting apparatus to Israel’s firefighters, enabling them to respond more quickly to emergencies while saving more lives.

Chair of Jewish National Fund-USA’s Fire & Rescue Task Force, Penny Rosen, was equally delighted by the gifting of a Torah. “Simchat Torah is a special time for Jewish people everywhere as we mark the conclusion of the annual Torah readings and the beginning of a new cycle,” said Rosen. “In the spirit of new beginnings, we are delighted to see the joy shown by our fire and rescue heroes in Be’er Sheva. Given the challenges associated with being a firefighter, hopefully, they will continue to find spiritual solace and support through their on-site synagogue, especially now that it has a Torah.”

The latest gifting of a Torah follows a similar event that occurred earlier this year when Jewish National Fund-USA donated a Torah to Be’er Sheva’s Ethiopian Jewish community. For more information about the organization’s BeInscribed initiative, visit beinscribed.org.