93 year old Bob Levine, known as “Blue Box Bob’, has witnessed so much, including the miracle of coming home to our ancestral soil in Israel after 2,000 years.

I am a father, grandfather, philanthropist, Zionist, and longtime Jewish National Fund-USA Ambassador and Partner (donor). In my 93 years on this planet, I have witnessed so much, including the miracle of coming home to our ancestral soil, Israel, after 2,000 years.

Growing up my family always had a blue box on our kitchen windowsill, and every week, before Shabbat candle lighting, my mother would give me and my siblings coins to place in the box.

My activism continued into my teens when I joined a Zionist youth group, Young Judaea (Yehudah Hatzair). Every year, around Tu BiShvat, we would go in teams with JNF-USA blue boxes and travel from Brooklyn to Manhattan on the New York City subway system. We would go from train car to train car with the blue boxes in hand soliciting contributions from the passengers. This was technically frowned upon by the city, so we would go in teams of three. One stood at the front end of the subway car, one at the rear end of the car, and the third carried the box through the car unless either watcher blew a whistle which was the signal that a policeman was coming. The solicitation stopped and the box was hidden. 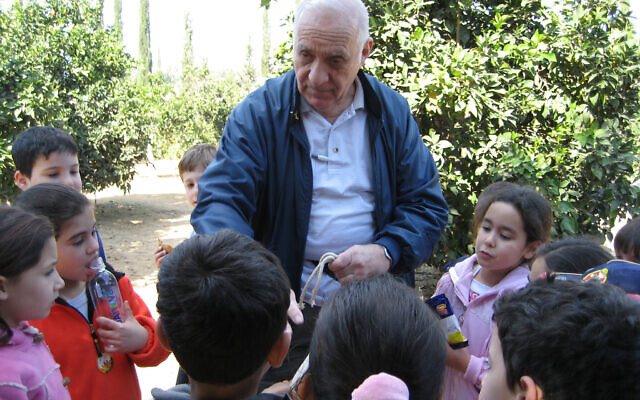 I visited Israel for the first time in 1951 when I served as a madrich (leader) on a Jewish summer camp. However, I fell in love with Israel all over again when I spent the summer of 1968 in the holy land with my wife and three children. During my first visit, the furthest south we could travel was Be’er Sheva, so this time I wanted to see Eilat. I flew with Arkia Airlines on a brand-new Handley Page Dart Herald aircraft from Tel Aviv to Eilat on a trip that would change my life forever.

Flying south, I looked out the plane’s window seeing areas that I remembered from my first trip. The coastal plain south of Tel Aviv was initially very green, but as I flew further south the green turned to brown. There was nothing but empty desert as far as the eye could see until we approached Be’er Sheva, where we suddenly saw streets lined with buildings. The plane then made a left turn toward the Dead Sea. A few minutes later, amidst the barren terrain I saw a huge patch of green in the middle of the desert. I saw life. I saw prosperity. I saw a future for the Jewish people in our homeland. Seeing all of this brought tears to my eyes.

I spent three days in Eilat and returned to Jerusalem without ever finding out who was responsible for making the desert turn green. My sister lived only a few blocks from JNF’s headquarters in Jerusalem and suggested I go there. I did, and one of the JNF staff took me into the map room and showed me maps of the Be’er Sheva area. When I looked at the map, I saw a huge patch of green just east of Be’er Sheva. “That’s it!” I yelled. “That’s what I saw from the plane.” The staff person explained that what I was looking at was the Yatir Forest. I replied that I didn’t remember that in the Bible. He explained that I was correct, it wasn’t in the Bible. I asked, “how did it get there?” He replied, “one tree at a time.”

He then told me the story. JNF had an office in Be’er Sheva and another office in Arad. Each week a courier would bring documents through the desert from Be’er Sheva to Arad. On one of his trips, he noticed an area of very high sand dunes that cast a shadow on the ground. He would normally stop there and rest in the shade. He wondered if there was enough shade to allow for saplings to grow. After discussing his idea with his supervisor, they decided to do an experiment, planting ten trees in the shade of the dune and watering them regularly. The area was called Tel Be’er Sheva. The trees took, so they planted more and more, and eventually the area became a forest. 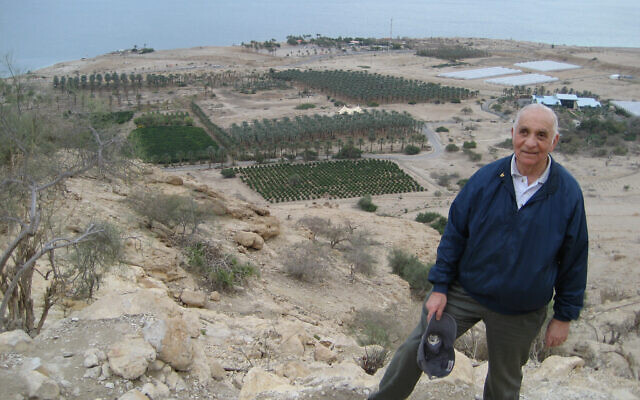 Bob Levine looking out onto the Negev Desert and its oases of green (Credit: JNF-USA)

I was flabbergasted and impressed, which led to my epiphany. If Israelis can plant a forest in the middle of a desert, the least I can do is go back to America and raise money to help them perform more miracles.

Today, I’m happy to say I have raised millions of dollars for JNF-USA and helped develop all kinds of projects throughout the country. Because of my campaigning to raise money by distributing blue boxes throughout my hometown of Teaneck, NJ, I was given the title, “Blue Box Bob.” Almost every Jewish retail shop in my town now has a JNF-USA Blue Box next to its cash register.

I see the Blue Box as a historic symbol of the Zionist movement that has connected tens of thousands of Jewish homes to the land of Israel. It is a symbol of our humble beginnings and has been an identifying factor for those Jews who believe that from humble pennies, nickels, and dimes a Jewish state was reborn.

Each year when New York City celebrates its Israel Day Parade, I proudly march up 5th Avenue inside a Blue Box costume with only my arms and hands being seen while I distribute modern day metal Blue Boxes to families lining the street.

As we continue to help our planet, let us support our homeland where miracles happen every day. Where supporting the land and people of Israel also supports environmentalism. Where a patch of green can survive in the arid desert.

Let us continue to support the land and people of Israel and Jewish people everywhere for our children, children’s children, and for those yet born.