“These are the sweetest peppers I’ve ever tasted!” exclaimed Jewish National Fund-USA World Chairman’s Council member, Alan Cohen, while visiting farmers from Israel’s Arava Valley. Yet unlike those peppers, things were not so sweet just two short years ago.

Twenty-five years after the signing of the peace treaty between Israel and Jordan, the Jordanian government decided to take back control over land that they had leased to Israeli farmers in the Arava, leaving the farmers who had cultivated the land for decades without livelihoods, fields, and a future for them and their children. Although new land within the Arava Valley was given to them by the Regional Council and the State, the farmers needed agricultural and water infrastructure to resume cultivating the land.

“It seemed so unfair to me that these farmers were going to be expelled from their fields by a situation they had no control over and that could have been easily avoided,” said Cohen. “When Jewish National Fund-USA’s Tali Tzour came to me with several proposals to support these farmers, I saw an opportunity to make a meaningful impact through a major philanthropic investment in water infrastructure.” 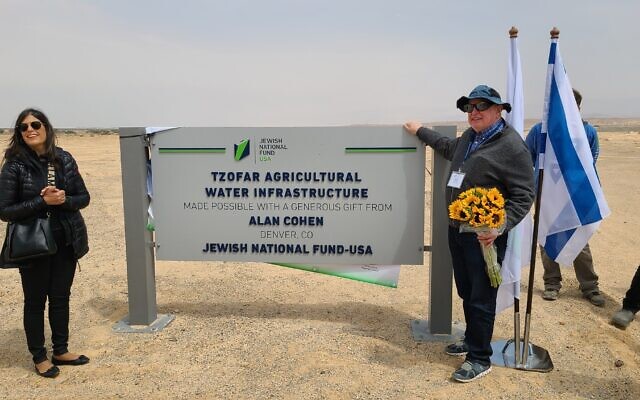 In the Arava, water is more precious than gold, with the region receiving less than one inch of rainfall annually. The price and availability of water is a major concern, especially since the region produces a large percentage of Israel’s fresh produce, including dates, their largest and most profitable export.

One innovation for date cultivation supported through Jewish National Fund-USA is the “Lysimeter,” a device that measures water movement in soil. The device enables farmers in the Arava to optimize the cost and output of their crops, helping them grow more with less.

“We built the largest Lysimeter in the world,” explained Jewish National Fund-USA Chief of Staff in Israel, Tali Tzour. “Farmers and scientists from around the world look to Israel, and specifically, this region to see how we can prepare for a future where we need to conserve resources while maximizing our output.”

Noa Zer, Resource Development Director of the Central Arava Regional Council added that in the Arava, all things water-related are challenging as farmers contend with limited brackish aquifer water that is three times as salty as tap water.

“All water for domestic use must be desalinated and… Jewish National Fund-USA and people like Alan Cohen are helping to build better water infrastructure for our entire community,” Zer explained.

“If you would show European farmers the salinity level of our water in the Arava, they would tell us you can’t grow anything,” she continued. “But we somehow manage because we have no other option. We have to innovative and challenge known practices to survive, and we are making great leaps forward thanks to our generous philanthropic partners.”

And Cohen agrees. “I find it fascinating how they can take this desert substrate where no civilization ever thought crops would grow and create the food bowl of an entire country!”

Although farmers in the region continue to face new challenges, as one farmer said: “We have done the impossible here in the desert and if there’s one thing we know about, it’s resilience and a belief that our best days are yet to come.”