LARCHMONT, NY – The pioneering landscapes of Romanian-Israeli painter Reuven Rubin, especially those painted in the 1920s during a time when the international art world was rapidly changing, are highly
sought after. Considered Israel’s most famous artist, Rubin (1893-1974) was Israel’s first ambassador to Romania and visited New York City often.

From an old New York family that befriended the artist in his early days as part of New York City’s art scene in the late 1920s comes four artworks by the artist, starring at Clarke Auction Gallery’s Sunday, January 22 auction, at 10 am. While the auction has nearly 400 lots, running the gamut from jewelry and silver to Asian arts and traditional antiques, the highlight will be Rubin’s artwork.

The story of how Rubin met Hope Weil in 1928 and became a constant in her family’s life for decades is one that, like many other stories, begins a bit serendipitously. Rubin was an up-and-coming artist at this time, having earlier befriended photographer Alfred Stieglitz in 1921, who helped organize a first American show at the Anderson Gallery for the two artists. Hope’s granddaughter, Faith Levene, said her grandparents, Hope and Walter, attended an auction in 1928 in New York City when Hope was 27 and bought their first Rubin painting. She is not positive how her grandmother first knew of Rubin’s work or if she met him before or after the auction. She believes her grandmother may have lived in the same building on the upper West Side as Stieglitz.

Weil was a great art lover who filled their New York City apartment and an upstate country home in Bedford Village with an eclectic mix of fine paintings and sculpture as well as a steady stream of bon vivants, friends and family. Walter was a self-made businessman who worked his way up the ranks in the investments business, becoming successful, and Hope was very sociable and enjoyed entertaining, poetry and art. 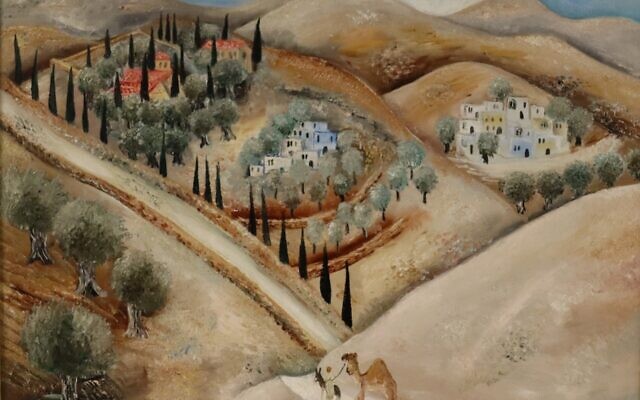 Click to bid on the Gailiean landscape Four paintings from the family’s collection will cross the block at Clarke’s auction, led by one painting in particular that is most likely that very painting the Weil family first bought of Rubin’s at auction. Painted in 1927, “Road to Safed,” is a 32-by-391⁄2-inch oil on canvas, documented in the book Reuven Rubin (1974) and estimated at $250/350,000. This region was a subject matter the artist returned to over the years and is in many of his important paintings.

Levene recalled the family history surrounding her grandparents’ first auction purchase of a Rubin painting. Apparently, Walter was unsure of who the artist was and if they should bid but Hope insisted so they bid on and won the painting, she said. Immediately afterwards, someone attending the auction came up to the couple insisting that they were supposed to buy the painting and offered them double what they paid for it. “My grandfather said, ‘Certainly not, it’s ours’ and that was the beginning of their relationship with Rubin,” she said.

Also on offer is an oil on canvas landscape depicting three groupings of homes set among trees and mountains ($100/150,000). While the 24-by-29-inch painting is untitled and dated, its subject matter is very similar to other Galilean landscapes Rubin painted in the early 1920s, while he was living in Tel Aviv. Here, he embraces a soft Mediterranean color palette to masterfully depict the olive trees, the undulating landscape and the short, boxy houses that are typically found in this region. 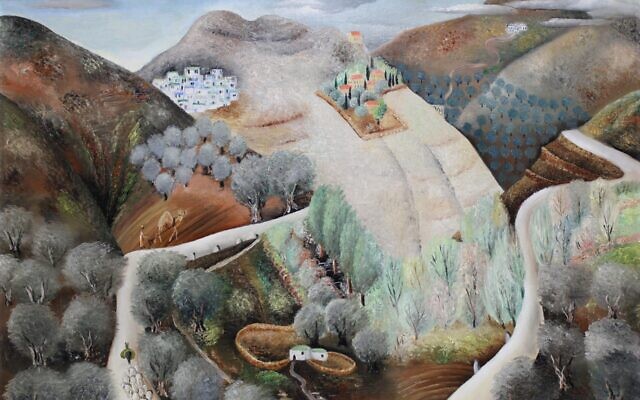 Click to bid on “Road to Safed”The artist is celebrated for his landscapes as well as his portraits and this auction introduces a figural painting and a portrait that have been kept in the Weil family for decades. A pen and ink drawing with wash in paper, “The Plowman,” ($3/5,000), retains a label from the Grace Borgenicht Gallery, New York. The drawing measures 16 by 22 inches. A self-portrait in ink wash on paper ($2/3,000), is signed and dedicated to Hope and Faith.” Dated 1940, the drawing measures 17 by 12 inches.

Levene notes that most of the women in her family were named Hope and Faith. Faith’s mother was Hope after her mother and Faith’s cousin is Hope but her mother was Faith. Rubin painted several portraits of Weil family members and Levene retains her mother’s portrait by the artist, painted in 1928.

Rubin was a frequent guest in the Weil home over the years and wrote several cards the family still has today. One written in 1971 reads “Dear Hope, your charming card gave us both great pleasure and your generous gift to the Princeton Museum is the most __(fascinating?)__ gift you made me for the new year…” The family also donated a Rubin sculpture, “Jacob Wrestling the Angel,” in the 1950s to the Rubin Museum in Israel, Levene said.

Asked what attracted her grandmother to Rubin’s art, Levene said she never knew exactly but her grandmother, who took up bookbinding, was a big collector and traveled around the world a lot, especially in those early days. “She was just a great art lover and evidently fell in love with Ruben’s work and they became close friends,” she said.