Superimposed onto the barren landscape of the Negev desert is a sweeping canvas of human history, culture and worship — if you know where to look.

One of the best places to find such a panorama is Mount Karkom (named for a desert crocus), which lies tucked away in a remote corner of the southwestern Negev, close to the border with Egypt’s Sinai Peninsula. Sitting 847 meters (2,780 feet) above sea level, it is surrounded by dry riverbeds and topped with a desolate plateau strewn with pieces of a particularly high quality dark brown flint.

It is hard to imagine why anyone would want to visit, let alone live near, this bleak place.

But visit and live they did — over much of the last mind-boggling 400,000 years. 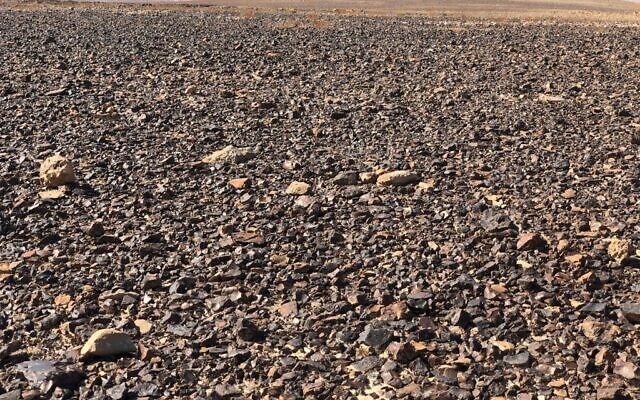 Flint strewn across the plateau on top of Mount Karkom. (Sue Surkes/Times of Israel)

That far back, according to paleoclimatologists, the Negev was greener. Those living on Mount Karkom would have looked down onto extensive open forest, much as Mufasa did in the opening sequence of “The Lion King.” Flint tools bear testament to hunting that went on in these valleys until 17,000 years ago.

The Italian-born Jewish archaeologist Prof. Emmanuel Anati first set foot on Mount Karkom in 1954, when he ascended, by donkey, what was known to the local Bedouin as Jebel Ideid — the Mountain of Holy Days. He found a vast open-air museum of rock engravings, or petroglyphs, he told The Times of Israel recently, and stones organized in a way that suggested cultic behavior. 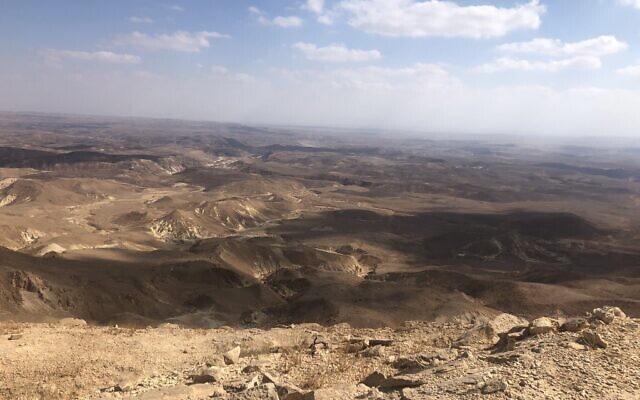 The expanse of desert stretching away below Mount Karkom. (Sue Surkes/Times of Israel)

Anati returned to Italy, then came back to Israel in 1980 to resume his fieldwork for a fortnight each year with other archaeologists, until just over a decade ago. 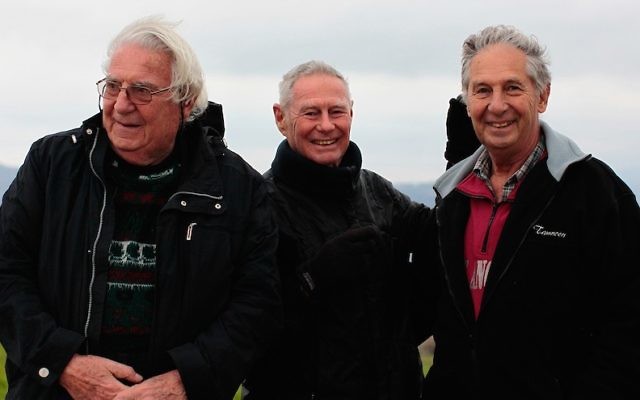 He has researched rock engravings all over the world and served as the founding president of the International Scientific Committee on Rock Art, which advises the International Council on Monuments and Sites and UNESCO, the cultural agency of the United Nations, on the subject.

Now aged 90, he is spending time in the Negev town of Mitzpe Ramon, where he keeps a home, and is trying to drum up interest and funds for a big museum to house his numerous Israeli finds. 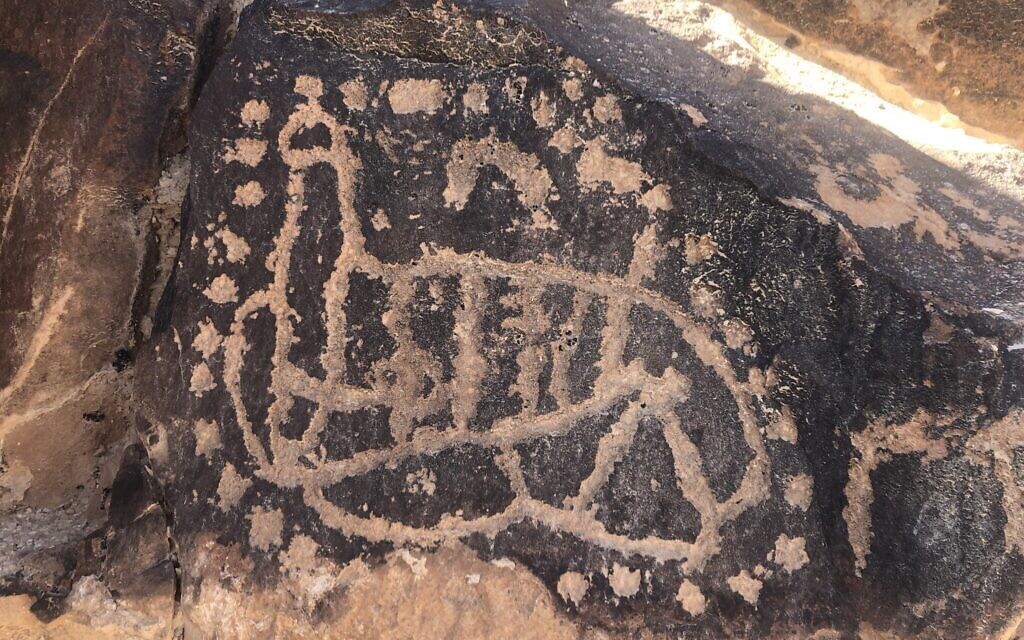 A strange rock carving that Professor Emmanuel Anati suggested might be a map of Mount Karkom. (Sue Surkes/Times of Israel)

According to his 2001 English-language book “The Riddle of Mount Sinai” (which is out of print, but is available in full on his website), Anati found more than 300 Paleolithic (early Stone Age) sites, along with tools, on the mountain — testament to some of the earliest hunting clans who lived in simple huts and survived by hunting and gathering.

He also mapped 1,000 rocks bearing an astonishing 40,000 rock engravings, some as old as 7,000 years, along with altars, standing stones, stone circles, shrines and burial mounds. 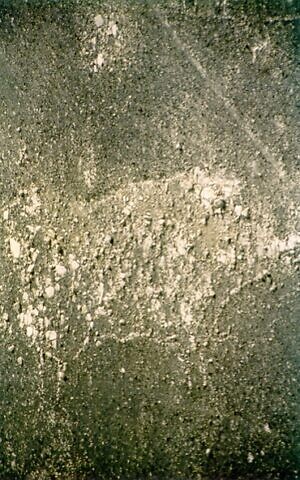 Aerial surveys in the 1990s enabled him to document and add the remains of more than 100 geoglyphs, some 20 of which are recognizable, to the list of wonders. These are organizations of stones that can only be seen as coherent forms from the sky (think Peru’s Nazca lines) and include images of four-legged animals, some of which, according to Anati, have long been extinct.

Such rock engravings carved, and often overcarved, into chalky white limestone covered with a dark brown patina have been mapped in their thousands in other Negev sites.

But as the Israel Antiquities’ Authority’s head of research Dr. Gideon Avni confirms, Mount Karkom is one of the biggest and most beautiful.

Depictions on the rock engravings range from animals and hunters to footprints — a sign of veneration since late Stone Age times — to portrayals of people praying with their arms stretched toward the sky. There are abstract shapes (to us, at least) and even figures that look like aliens.

There are also inscriptions in many tongues, stretching from the Hellenistic and Roman (including Nabatean) periods to the Byzantine and Islamic eras.

The ibex, a symbol of resurrection?

More than half the images are of the adult male Nubian ibex, a species of goat with horns, according to Dr. Uzi Avner of the Dead Sea and Arava Science Center.

These are often engraved with a hunter and a canine predator. Here, the animal stands; there, it’s upside down. Sometimes it appears with the moon or the stars. 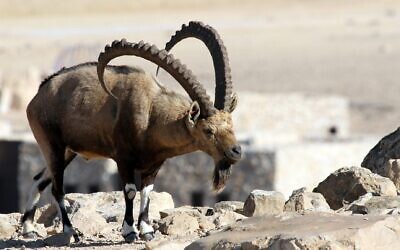 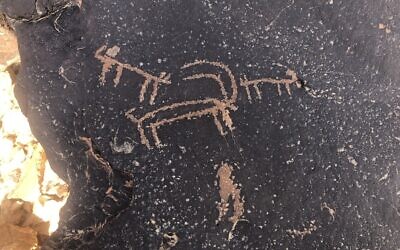 An ibex engraved into a rock at Mount Karkom. (Sue Surkes/Times of Israel)

Avner has suggested that the ibex may represent a cycle of life and death, possibly a dying and resurrected god that is related to rainfall, the fertility of the soil, animals and humans. Other images relate to the changing of seasons. 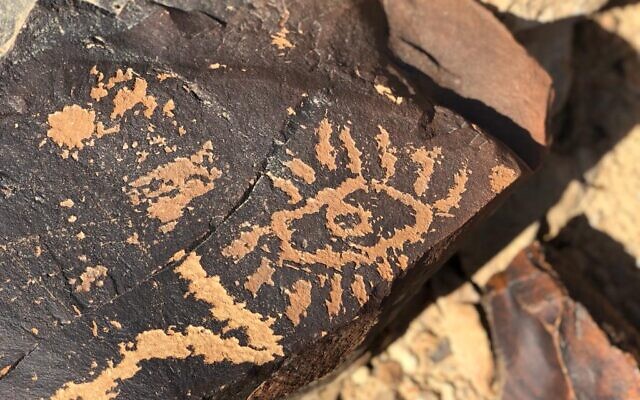 Engraving of an eye. (Sue Surkes/Times of Israel)

Archaeologist Lior Schwimer of the Israel Nature and Parks Authority has noted that a striking image of an eye is completely shaded by an adjacent rock on just one day — December 21, the winter solstice.

Anati was particularly fascinated by images that seemed to conjure up biblical tales; for example, a serpent and staff carved into a standing stone with its echoes of the staff that turned into a snake when Moses threw it onto the ground in Exodus 4:2-3. 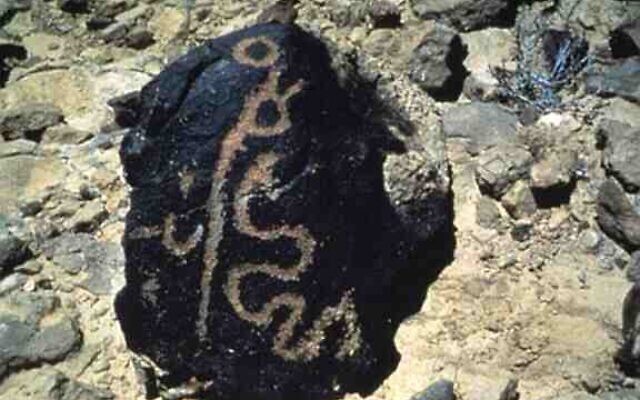 Image of a serpent and staff. (Courtesy, Emmanuel Anati)

He interpreted another image, which was divided into 10 sections, as a depiction of the two tablets of stone inscribed with the Ten Commandments that Moses received on Mount Sinai. 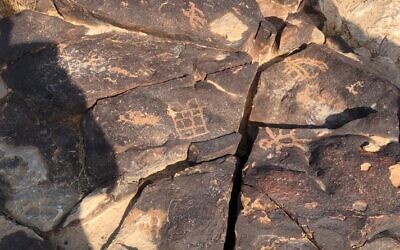 And he connected a third engraving, found close to a water hole, with Deuteronomy 8:14-15, in which God commands the Israelites not to forget He who “led you through the vast and terrible wilderness infested with poisonous snakes and scorpions, and the saraf [a poisonous lizard], where there was no water, who brought thee water from the hard rock.” 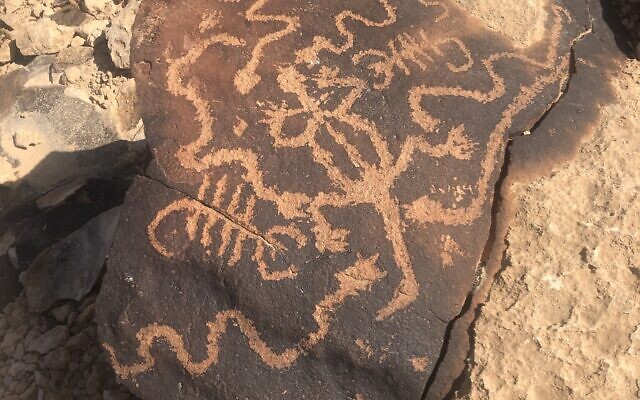 Also intriguing for Anati was a site discovered in 1983 at the foot of the mountain that comprises 12 pillars. 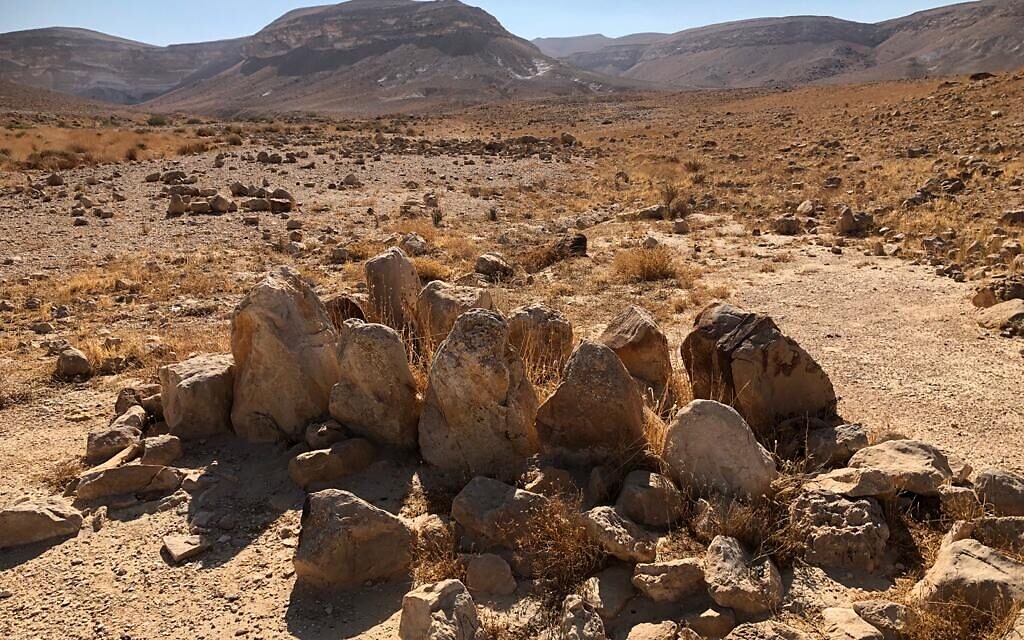 Twelve standing stones at the base of Mount Karkom. (Sue Surkes/Times of Israel)

For him, it brought to mind Exodus 24:4, which describes how Moses “rose early in the morning and built an altar at the foot of the mountain, and put up twelve pillars, for the twelve tribes of Israel.”

Moses “rose early in the morning and built an altar at the foot of the mountain, and put up twelve pillars, for the twelve tribes of Israel”

Shwimer, who directs the Israel Nature and Parks Authority’s guiding center at Mitzpe Ramon, has been mapping stone engravings in the Negev for 12 years and still isn’t finished.

He is also involved, together with archaeologist Davida Eisenberg-Degen, in a project being run by Ben-Gurion University’s Ifat Shapira and Yuval Goren to scientifically date the engravings by calculating the amount of manganese present. Their research will be published next year.

It is the manganese, iron and clay that give the rocks their dark brown patina. When first etched, the images would have revealed the white chalk underneath, but over the centuries the patina has returned, eventually obliterating the image entirely. 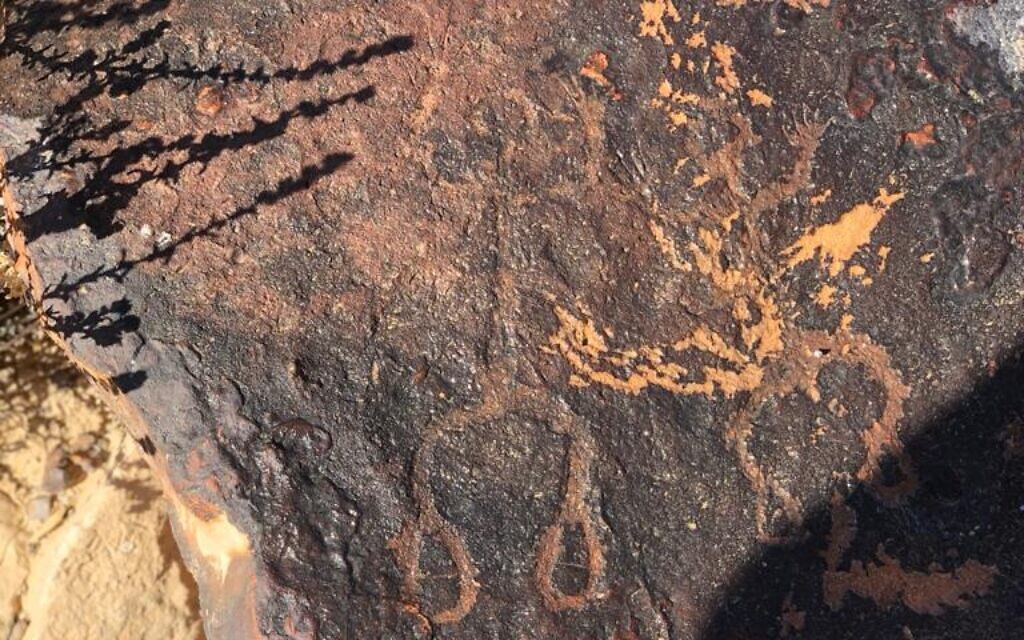 The system the researchers are developing will give scientific underpinning to the dating methods used so far — comparisons of patina (the darker, the older), with other pieces of knowledge. Camels, for example, were only domesticated in the Negev in the 10th century BCE, so they figure camelid images cannot be from any earlier. 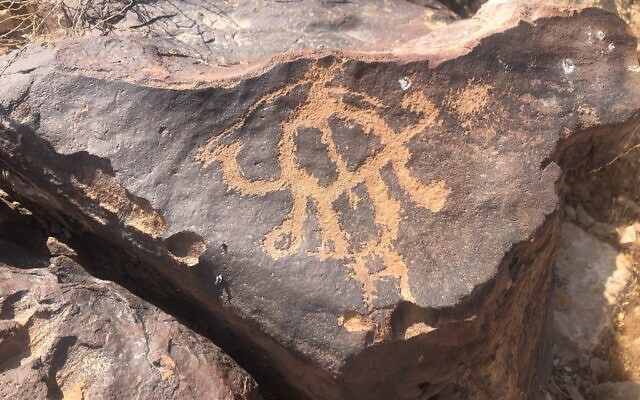 Engraving of a camel, Mount Karkom. (Sue Surkes/Times of Israel)

Mount Karkom’s remoteness has only increased since the army closed Route 10 along the Israeli-Egyptian border to civilian traffic several years ago, save for certain holidays if the security situation permits.

Our trip, from Mitzpe Ramon, took three bumpy hours, most of it along gravel plains and dried riverbeds in a sturdy 4×4. 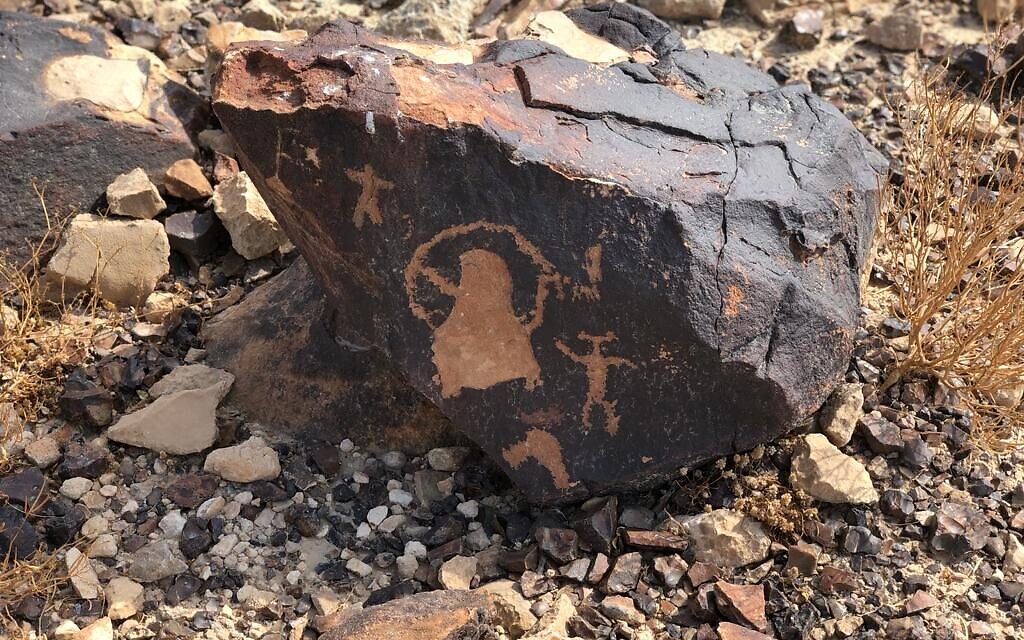 Since the 1980s, the mountain has formed part of the massive 1.5 million dunam (370,000 acre) Negev Highlands Nature Reserve. Used by the Israel Defense Forces for training during the week, it is open on weekends. Together with Anati, the INPA marked out several paths in the 1990s some distance from the antiquities, possibly to protect them from independent visitors.

But, said Shwimer, who estimated that 10,000 to 15,000 people now visit the site annually, times have changed. Today, anyone with a 4×4 — and numbers are growing — can use Google Earth or a variety of navigation apps to reach the plateau’s riches. 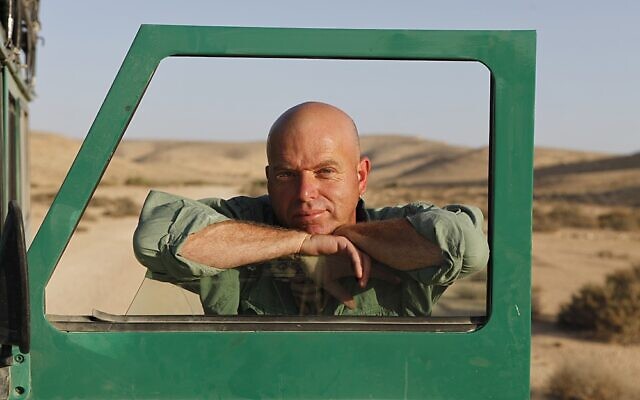 Lior Shwimer of the Israel Nature and Parks Authority. (Courtesy)

Three years ago, Shwimer received complaints about damage. People were scratching names into the rocks, clambering over them to have their photographs taken, or rearranging important stones. 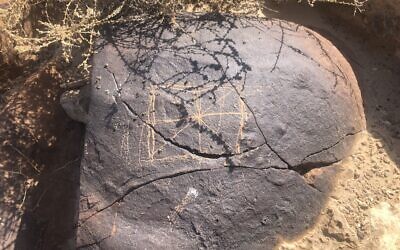 He documented the damage, consulted and then devised a plan to bring the paths closer to selected groups of rocks, some of which will be roped off, so that they can be seen from afar but touching is discouraged. Explanatory signs — most earmarked for the campsite below the mountain — are at the editing and design stages.

The increasing number of visitors is partly thanks to Anati’s announcement in 1983 that the compilers of the biblical narrative about Mount Sinai had Mount Karkom in mind. Since the Byzantine era, however, Christian pilgrims have associated Jebel Musa in the Sinai desert with the giving of the Torah. Other candidates have also been put forward by a variety of sources.

Part of Anati’s justification was the biblical assertion that it was “11 days journey from Horeb [another name for Mount Sinai], by the way of Mount Seir, to Kadesh Barnea” (Deuteronomy 1:2). 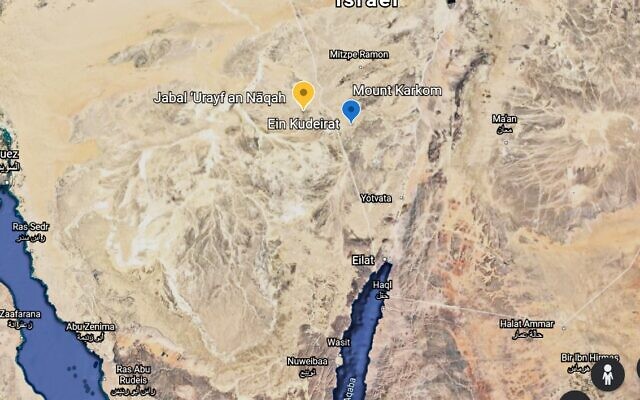 His theory was roundly rejected, not least because the mountain was in use for ritual activity from 4000 to 2000 BCE but not during the 13th century BCE, commonly associated with the Exodus period.

Not that that has stopped increasing numbers of Christians from visiting to hold prayer services, nor thousands of Israelis from coming on weekends around the winter solstice to watch the so-called “Burning Bush” seen by Moses on Horeb in the Book of Exodus — a hole in the rock that takes on a particular golden glow when the sun goes down. The phenomenon of light was discovered by tour guide Yigal Granot and its connection with the Burning Bush was suggested by another guide, Dr Haim Berger. 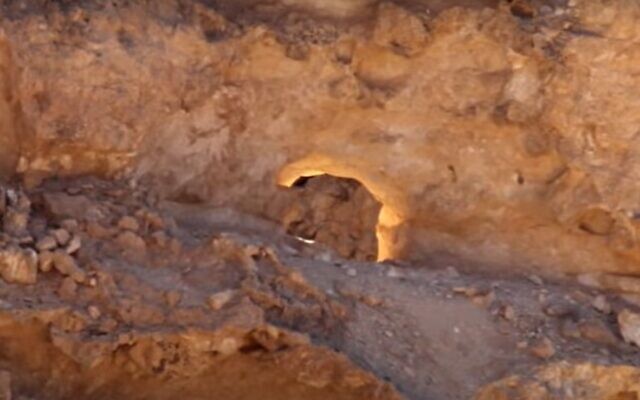 The window of light seen by some as resembling the Burning Bush. (YouTube screenshot)

Anati told The Times of Israel that the “mentality in archaeology in Israel is 100 years old” and limited to “describing and dating, without looking at the content.”

But the IAA’s Gideon Avni, while recognizing Anati’s world expertise in rock engravings, said that while there were clear signs of ritual behavior on Mount Karkum, they were similar to those found in many other places and cultures and there was no scientific proof that it is unique.

“People were discussing where Mount Sinai was in the 19th century,” Avni said. “But given the difficulties of dating and big debates about the authenticity of Bible stories, nobody in Israel, except Anati, is trying to find the physical locations anymore.” 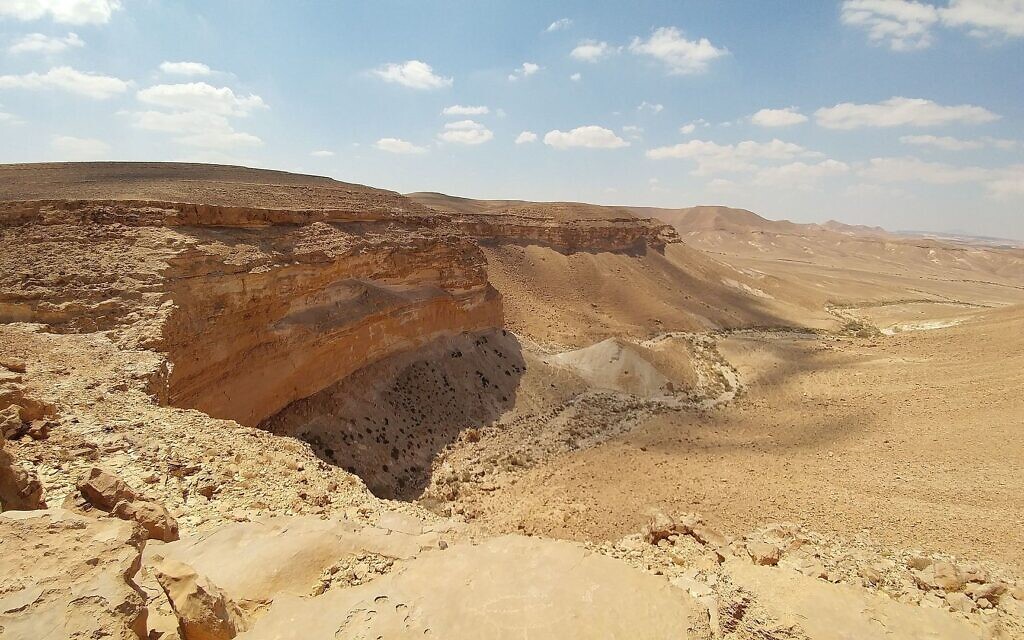