The former Veep nominee’s son Matt wants to help Democrats win back the Senate. But first he has to convince the party that he’s truly one of their own

WASHINGTON — Matt Lieberman’s father was worried about him.

Lieberman, who recently threw his hat into the ring for the Georgia Senate race, is the son of the former Connecticut senator and 2000 Democratic vice presidential nominee Joe Lieberman, an Orthodox Jew. He has had plenty of exposure to politics and has worked as an informal adviser on several of his old man’s campaigns, at both the state and national level.

But in private conversations, his father wondered if he knew what it would take to be at the center of one as a candidate?

“I think the anxiousness was just really to be sure I fully understood how difficult an undertaking running for office was nowadays,” Lieberman said. “Obviously, he knows that firsthand. Although I’m 52 years old, I’m still his son. I think he just wanted to be sure that my eyes were open.”

Last month, Lieberman announced that he was running in a special election to replace Republican Senator Johnny Isakson in Georgia, who is stepping down because of health concerns. Lieberman is the first — and thus far the only — Democrat to enter that race.

A state-wide campaign for public office is always a daunting challenge — from having to travel all across the state to meet voters and jockey for endorsements, to enduring the excruciating endeavor of spending hours upon hours asking donors for money.

But in today’s vituperative political climate candidates face an additional challenge: attacks, not only from an opposing party, but from factions within their own.

“Once he was assured that I completely understood and had internalized and had accepted the fullness of the challenge ahead, he’s been extremely supportive,” Lieberman told The Times of Israel in a recent interview.

Still, he’s running in a state where one of the the nation’s most prominent progressive stars has shifted the political winds leftward. 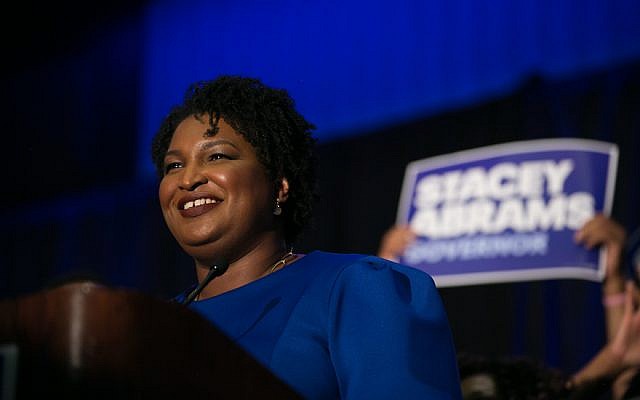 Stacey Abrams at an election night event in Atlanta, May 22, 2018. (Jessica McGowan/Getty Images via JTA)

Democrat Stacey Abrams’ narrow loss to Governor Brian Kemp in the 2018 gubernatorial election shows how close the Peach State is to turning blue. Abrams received more votes than both Donald Trump and Mitt Romney did there in 2012 and 2016, respectively.

At the time of the last election, her opponent Kemp was secretary of state. In that capacity, he allegedly engaged in various voter suppression tactics that may have tilted the election in his favor, including by purging more than 53,000 voters from the rolls — 70 percent of whom were black.

Abrams has said she does not plan to run for the open Senate seat, giving Lieberman and other Democrats a path forward.

Since announcing his campaign, Lieberman has cast himself as an unabashed liberal — calling for expanded voting rights access, stronger protections for female reproductive rights, and more stringent gun-safety laws.

Yet his message has revealed a unique challenge for the Senate hopeful: Can the son of a famously hawkish moderate — who Democrats have often criticized as being further to the right than some Republicans — convince the party faithful that he’s a sufficiently progressive Democrat?

‘My name is my name. It’s not going anywhere’

Lieberman is  hoping he can have it two ways. He wants to use his last name to his advantage while also establishing an independent political identity.

“First and foremost, my name is my name,” he said. “It’s not going anywhere. I’m proud to wear it. I can’t say for sure exactly how it plays out in the end. I know there are people who like my dad very much, and I hope they’ll perhaps give me an extra hearing because of that. And I know there are people who really don’t like my dad. Nonetheless, I think people are fair and I think those folks will also give me a fair hearing.”

He added, “I would remind them that, technically, we are two different people. I’m running as Matt Lieberman.”

For starters, that means running as a loyal Democrat. While the elder Lieberman was a member of the party for most of his life, he left after losing the Connecticut Senate primary in 2006. He then won in the general election as an independent, and served as one during the rest of his Senate tenure. 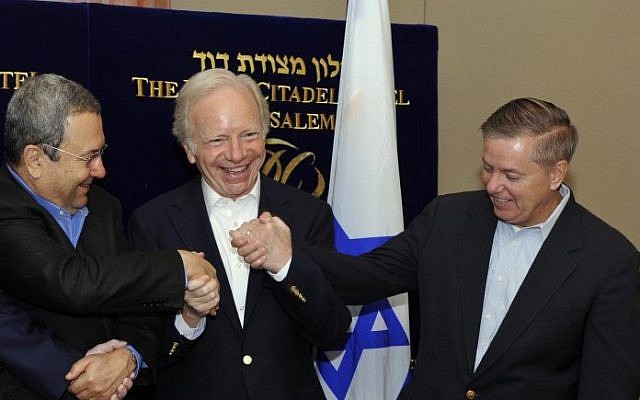 Many of his positions since then, however, have been far from the Democratic norm. He endorsed his longtime friend John McCain over Barack Obama in 2008, was a critical opponent of creating a public option during the healthcare fight in the Obama administration, and chaired an advocacy group against the Iran nuclear deal.

He also introduced Trump’s controversial Education Secretary Betsy DeVos during her confirmation hearings. He was criticized at the time for failing to disclose that his law firm, Kasowitz, Benson, Torres & Friedman, has represented the president since as early as 2001. What’s more, Trump interviewed him to replace FBI director James Comey in 2017.

The younger Lieberman, for his part, insisted he should be judged on his own merits and positions.

“This campaign is about me and the positions I’m taking and how I think our government can change for the better,” he said. “My point is that you really just have to look at what candidates are saying issue by issue and decide whether you agree or not.”

As a businessman and former teacher, Lieberman is running on a left-of-center domestic platform, with voting rights as a main cause, given Georgia’s recent history.

He said he would support national legislation to ensure same-day voter registration and making Election Day a national holiday. Meanwhile, he’s closer to the center of the party than its left flank on healthcare, arguably the biggest issue for Democrats in the upcoming election. He supports a public option rather than a single-payer system, i.e. Medicare for All.

On Israel and Iran

Where Lieberman’s comes closer to his father is clear: foreign policy.

Lieberman is a strong supporter of Israel and the US-Israel alliance, a critic of the Palestinian Authority, and a strong detractor of the Iran deal.

“The two-state solution is still a goal to have to try to pursue,” he told The Times of Israel. “It’s been difficult to pursue primarily because the good faith and true intentions of the other parties has come into serious question.”

He criticized 2020 presidential hopeful Bernie Sanders for suggesting that part of the $3.8 billion in annual US military assistance to Israel should instead go toward humanitarian relief in Gaza. 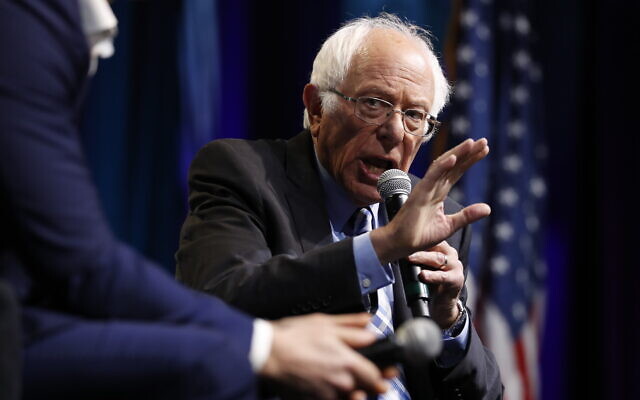 “Of course, the main problem in Gaza is that the Hamas leadership has been consistently and blatantly misappropriating enormous sums of money for the terror enterprise,” Lieberman said. “Israel and Egypt have both correctly sought to control that, because that’s not what that money is supposed to be for. I don’t think anything of that sort that’s been going on in Gaza would ever be a reason to try to put pressure on Israel through financial means or otherwise.”

Unlike most of the 2020 Democratic candidates, Lieberman would not support re-entering the Joint Comprehensive Plan of Action, as the Iran deal is formally known.

“I think it would be great to have a better deal than the one that we had before,” he said. “I think the Iran deal proved to have costs that perhaps weren’t fully factored in when the deal was entered into. Specifically, I think the deal facilitated Iran’s projecting itself more aggressively in the region, and created the financial wherewithal for Iran to do that.”

Lieberman would not say whether he supported or opposed Trump’s decision in 2017 to withdraw the United States from the landmark nuclear pact with Tehran. 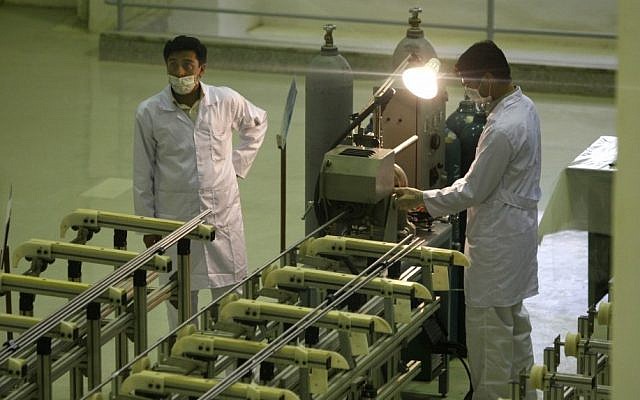 “I would rather see what’s in front of me when I’m in the Senate and focus on the better deal that I just described,” he said. “I’m not privy to the multi-level security briefings as I would be as a senator. Clearly, the Iran deal had costs that a new deal shouldn’t have to bear when it comes to enabling Iran to subsidize mayhem.”

Whether that argument resonates with voters in Georgia — if they are going to vote on foreign policy issues at all — remains to be seen. Domestic issues and Trump appear to be more at the forefront of voters’ minds.

Lieberman is hoping that the circumstances of the moment — the growing disapproval of Trump amid the impeachment inquiry — and the chance to send more Democrats to the Senate could help galvanize his bid.

There are currently two Senate seats in Georgia up for grabs — the one Isakson is vacating, and another held by Senator David Perdue, who is up for re-election. There are four Democratic challengers vying to oust Perdue. In other words, Georgia offers a unique opportunity for Democrats to gain power Washington.

“We have the opportunity in Georgia to elect two United States senators who are Democrats, and we can become instrumental in flipping the Senate away from Mitch McConnell to a Democratic majority,” Lieberman said. “That turn of events, and being a part of a Democratic majority in the Senate, would make a world of things more possible.”