The door opens just enough that I can see a single eye examining me. For a second, I can’t breathe. There’s something familiar about it. But the feeling passes.

Below, about waist high, another eye blinks at me, then lurches back, as if a hand belonging to the eye above has just yanked it.

“Who are you?” a woman’s voice accuses me.

“You’re the old man? You live next door?”

I wince at the description but acknowledge the fact. “You’ve seen me. But I don’t go out a lot, so maybe not much.”

I point at the floor. “There’s a package for you. From SuperPharm. It’s been out here since yesterday. Tonight is the holiday, the Seder. I thought you’d want to know.”

The eye glances down and the voice softens, just a bit. “Oh, thanks.” Then: “Don’t get any closer.”

A hand reaches out and picks up the package.

“I’m sorry,” she says. “I’m just so worried about Nadav. I’m all alone and I’m expecting next month. My husband got caught in the US when this Corona thing got out of hand. He works with a company there. We don’t know when he’s coming back.”

The door begins to close.

“I just wanted to say,” I interject just in time, “that the boy is so much quieter than I would have expected.”

“Oh,” she says in a monotone. “Nice of you to say that. It doesn’t feel quiet in here.” And the door closes.

I stand there a moment and then put my key in my own door and open it. The door of the girl who lives in the third of the fourth-floor apartments opens. She nods to me as she trots down the stairs. I close my door behind me, and I’m alone.

The old guy in the apartment catty-cornered to this one is just going into his apartment when I escape mine. I give him a little nod but I don’t think he even notices. He never does.

The first time I saw him, out of the corner of my eye, I thought it was my Saba, my grandfather. It was a weird feeling, like one of those dreams I sometimes have about him. We’re on a walk together and he’s explaining something important to me. In those dreams I know that he’s dead but I’m afraid to say anything because I also know that if I do he’ll disappear.

I can’t take being alone anymore. I have to get out, feel the sun, breathe the air, see people. Real people, not pixels. And if a police cruiser stops me and wants to slap a fine on me, I’ll tell them, thank God you stopped. Anything for a conversation.

Just my luck to be stuck here alone, trying to focus on my on-line organic chemistry class while tracking my Instagram and Twitter feeds. Noga went to stay with her Dad just before they closed everything down because he’d had prostate surgery and Zack decided to move in with his girlfriend when she returned from Italy and had to self-isolate. I’m afraid that if I go home I’ll infect my parents, who knows, so here I am alone. It was Noga and Zack who pushed for this crummy fourth-floor walkup in Baka. It’s bigger than the place they saw in Nahla’ot and the rent is a few hundred shekels cheaper. If I were there I’d at least have friends around that I might meet on the street. Here I don’t know anyone.

Rina died last June. I’ve pretty much been in isolation since then, even before the Corona virus made it something everyone was doing. It was a second marriage for both of us. I won’t say it was a rose garden, but it gave us each someone to wake up to in the morning and make up with in the evening. Rina went through a bad divorce when her son and daughter were teenagers, more than twenty years ago. She was not shy about taking most of the blame. She wasn’t really cut out to be a wife and mother, she admitted. Her children agreed, and largely kept their distance after their mother moved in with me a couple years later. I’d been a widower for about as long as she’d been married, no children. Noa crashed our car while we were both doing graduate degrees. I loved her intensely, the way young people do. I was alone for a long time, busy with my excavations and pursuing tenure and being a reserve company, then battalion, then deputy regimental commander and making a name for myself in the field. For a long time it wasn’t much of an issue. At some point I began thinking of growing old that way. It scared me.

A friend introduced me to Rina. “She’s got a sharp mind and a sharp tongue,” he said. “You’ll love the first, and if anyone can learn how to live with the second, it’s you.” I did, and it was okay. I could handle it. I had someone to talk to, and Rina cared about me, she really did. It was good that her illness was a quick one. She did not like to be weak and made that known. She died, and then I was alone again.

I retired years ago. I settled into something like a self-imposed exile. Haven’t kept up professional contacts. Not social ones or army ones or family ones either. It’s just easier that way. I like to read, I watch movies on my computer. Once a day I go out for a run, although these days it’s more like a quick walk. I have some heart issues. Bad genes, my doctor says. 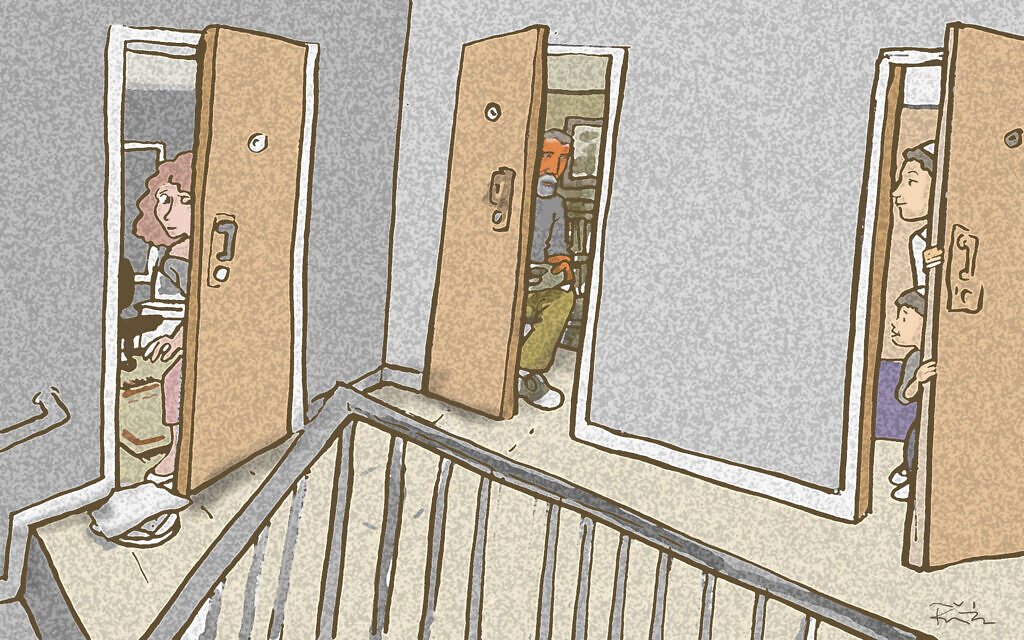 When the Corona plague arrived, I got a few calls from guys I hadn’t heard from since the funeral, and from a sister whom I didn’t even see then, telling me to be careful. My doctor also noted that I’m in a risk group. There wasn’t much for me to change. Anyway, if I get sick and die I’ll accept that. My time isn’t far off anyway.

I sit down in my favorite armchair and pick up the paper. But I can’t concentrate. My shoulders are tight and it feels like I’ve taken a bullet in the stomach. When I dig down and try to figure out if I’m sick, what it could be, all that comes into my head is the eye in the crack in the door. I sit there for a moment. I hear Nadav whining through the wall. I never noticed such sounds before. I get up. I walked to the window and back. Then, without even thinking about it, I open my door and walk out and knock on the other one.

It parts a crack and the two eyes peer out, one above and one below.

“Yes?” the eye above ask impatiently. There it is. Noa’s eye. I am blown back by the shock wave that strikes my heart. I catch my breath.

“Ah, I just wanted to check to see if there’s something I can do to help out.”

The upper eye looks down at the lower one. “It’s not Elijah. We haven’t even put his wine out. We haven’t started the Seder yet.”

“Is your name Noa?” I didn’t mean to say it. It comes out. I’m always so careful with words. Trained to think before speaking, even under pressure.

I hear sound of feet on the stairs.

“Is your name really Yinon?” It’s the voice of the girl from the third apartment. “I just saw it on the mailbox. My Saba …” Her speech ceases suddenly as if she can’t continue. Then she shakes her head. “It was his name. I’m sorry, I loved him so much.”

I tried to ignore the name on the mailbox because I so needed to get out. I passed by it and through the door. A bitter orange tree grows in the garden just off to the right and even at this late date and with all the rain and wind some bright spots can be seen through the green. I catch the scent of the viburnum shrubs that line the paths. A pair of sunbirds, a drab female and a blue-burnished male, swoop down to tiny pink blooms and then straight up to the sky. I’m in the shade but the shade ends just a few steps away. If I can get there, I will feel the sun. But the name on the mailbox draws me back. Until he died five years ago he led our Seder every year. This year I’m not even going to have one. I run back up the steps, almost in tears. And I see him there, standing by the door of the apartment between us, and it’s like a dream.

I’m standing at the window. The shadows outside are growing longer. My self-discipline is broken. I cannot focus, I can only watch the sun sink toward the horizon. There is a quick knock on the door, as if someone has knocked and run.

I’m standing at the window, trying to catch the last rays of the setting sun. I’m not crying any more. But I feel so alone. There is a quick knock at the door, as if someone has knocked and run. I hesitate a moment and go to open it. There, on the floor of the landing, is a plastic plate covered with a napkin. I pick up the napkin and I see lettuce and parsley and haroset and an egg with a blackened shell and a chicken neck. Below it is another plate with three matzot on it. And a bottle of wine and a disposable cup.

I hear Yinon’s door open and see him bend down and examine two plastic plates just like mine.

The door to the middle apartment opens a crack.

“I can’t let you in,” Noa says. “But bring out a chair and a small table if you have one. I put our kitchen table by the door. We’ll read the Haggadah together.”

I look at him and he looks at me. We each go back into our apartments. I drag out a kitchen chair and a little plastic table we found discarded in the garbage one day, the kind kids sit around in kindergartens.

I bring out a dining room chair and a side table from the living room. I put the two plates and the wine on it and sit and wait. On the other side of the landing, the girl has done the same.

“It would be nice if we could sit together.”

I see the eye through the crack. “Ready? We’ll sing the order of the Seder now,” Noa announced. And she and Nadav start the melody, which I don’t really know. “Kadesh, Urehatz, karpas …” The girl joins in, and I do my best to fake it.

When we finish, I see the lower eye peer out.

“I think it really is Elijah,” Nadav whispers to his mother.

The girl laughs. “Do you know who I think it is?”

I glance at Noa’s eye.

Haim Watzman’s Necessary Stories appear in The Times of Israel every four weeks. This is the 150th story to appear under that rubric since he began writing them in 2008. For an archive of all his Necessary Stories, visit Southjerusalem.com.