TAMRA, Galilee — In an attempt to reach out to Arab voters, the Blue and White party, the primary challenger of Prime Minister Benjamin Netanyahu’s Likud party in the upcoming national elections on April 9, on Wednesday held its first major campaign event in an Arab village.

But the event at a hall in the Arab Galilee village of Tamra, featuring the party’s number three, Moshe Ya’alon, which appeared to be a genuine effort to communicate with the Arab public, turned controversial when locals complained about invasive Shin Bet security checks for those attending.

Shortly before it was supposed to start at 7 p.m., one Tamra resident, overcome with frustration, raised his voice at Shin Bet agents, who he said demanded he undress as part of a security inspection.

“We welcome you into our village and then you ask us to remove our belts and lower our pants,” the resident yelled out. “Why can’t I be treated like a normal person?” 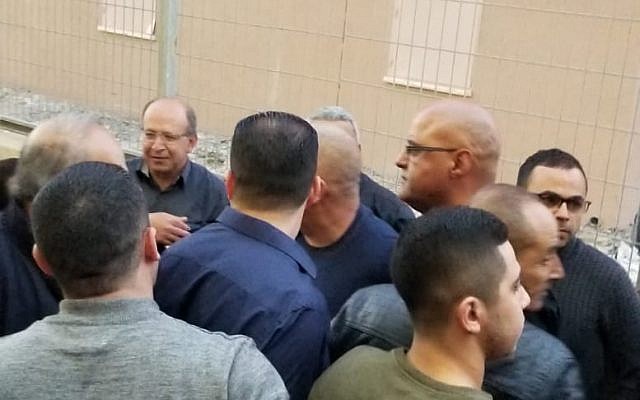 Locals crowd around a Tamra resident, who said he was asked by the Shin Bet security service to undress as a part of a security inspection at a Blue and White event, April 9, 2019. (Adam Rasgon/Times of Israel)

Ghadir Murih, a Druze former TV anchor who is number 25 on Blue and White’s electoral slate, approached the resident and the Shin Bet agents, trying to find a solution, but her efforts were to no avail. The resident said he would under no circumstance remove his clothing, while the agents said he would have to abide by their security protocols to enter. He ultimately left.

After this incident, the Shin Bet officers stopped allowing people to enter the event for several minutes. One of the officers stated: “We have protocols and we are doing what we need to do to ensure safety. We are doing everything we can to do this in a timely manner.” 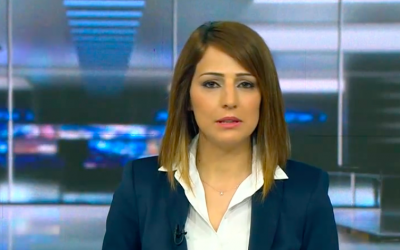 Ghadir Murih, a Druze former TV anchor who is number 25 on Blue and White’s electoral slate, presenting the news in Arab on May 17, 2017. (Screenshot: Youtube)

They subsequently began asking locals, who had come from Tamra, which has a population of over 30,000, and nearby towns and villages, questions about their backgrounds and whether they knew anyone already inside the hall. Some of the locals called friends and family who had already passed the checks to come outside and tell the security agents that they knew each other.

As some people gained entry to the hall, others waiting in line decided to leave.

“I feel like we are at the airport. I don’t understand why we need to be humiliated to attend this gathering,” one person said before walking away.

‘I know you are Arab’

A Shin Bet agent then questioned this reporter about my background and reasons for coming to the event. I presented him with my American driver’s license and told him I did not have a valid journalist identification card with me. (I am in the process of applying for a new press card. Blue and White’s Arabic advertisement for the event included no warning about thorough security checks.)

He then passed me off to a police officer, who asked me whether I am Jewish or Arab. When I told him that I am Jewish, he said: “I know you are Arab because of the way you speak Hebrew.”

The policeman then wanted to know whether I belong to the boycott, divestment and sanctions, or BDS, movement. I told him that I came to cover the event as a journalist for The Times of Israel, where I have worked as a reporter for the past nine months.

After conferring with a Shin Bet agent, the officer said I could enter the event. I went through a metal detector, put my belongings into an X-ray machine and walked into the hall. 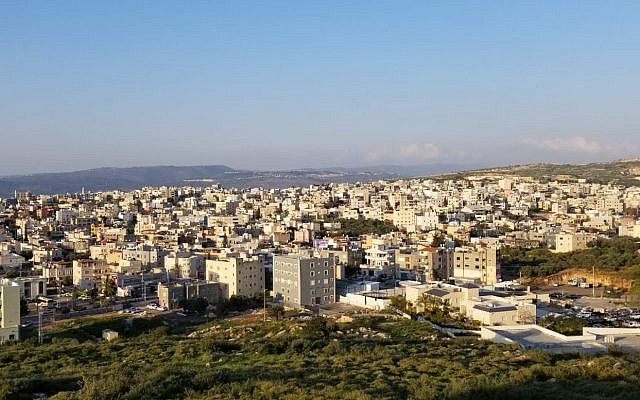 Asked later whether the police officer’s question about my religious and ethnic background was standard protocol, Israel Police spokesman Micky Rosenfeld said: “General questions can be asked by an officer on duty. In order to understand further and assess the situation, an officer can also ask to see one’s ID card if necessary.”

Some 40 minutes after the event was scheduled to begin, Ya’alon, the Blue and White candidate, was nowhere in sight and the hall was well less than half full.

I approached Mahmoud Majadla, a 45-year-old resident of Baqa al-Gharbiya, and asked him why he intends to vote for Blue and White.

“I believe we need a new prime minister because Netanyahu is dividing the country and harming the relationship between Jews and Arabs. I think [Benny] Gantz is the only person who has a chance to defeat him and help us move in the right direction,” he said, referring to the Blue and White candidate for prime minister.

Netanyahu drew condemnation last month from Arab Israelis and their allies for stating that “Israel is not a state of all its citizens. According to the nation-state law we passed, Israel is the nation-state of the Jewish people — and not anyone else.” He also courted controversy on election day in 2015 when he published a video urging right-wingers to vote because Arab Israelis were “flocking” to the polls.

Just before I was going to ask Majadla another question, a Shin Bet agent approached and asked me to come back outside with him. I followed him and he told me to wait while he received clearance to permit me to return.

Meanwhile, Ya’alon’s small motorcade arrived at the hall and he entered. A Shin Bet officer immediately told a group of some ten people waiting to be questioned that he would not be able to allow them inside. 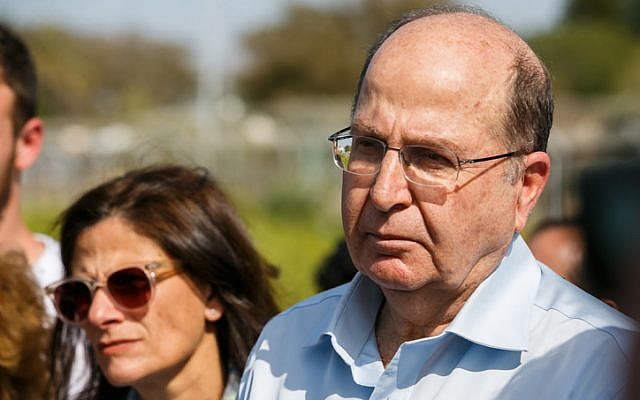 Minutes later, around 8 p.m., the same officer told me I could return to the event. Some 200 people had successfully entered; Imad Saif, a Blue and White activist, who helped organized the event, had said on Tuesday that he expected 1,000 people to attend.

Ya’alon: They check me, too

Ya’alon, sitting alongside candidate Murih and Ruth Wasserman, number 43 on Blue and White’s slate and a former diplomat in Cairo, smiled at the audience as a Blue and White activist welcomed him. 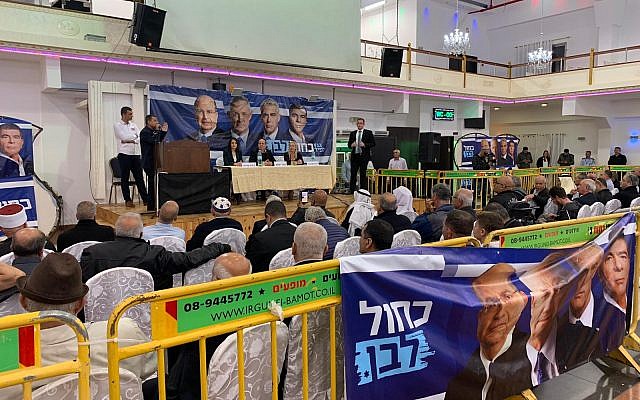 Moshe Ya’alon and others speak at a Blue and White event in the village of Tamra in the Galilee on April 3, 2019. (Courtesy of Inbar Bezek)

Immediately upon taking the podium, Ya’alon, a former defense minister and IDF chief of staff, apologized for the security checks.

“I am happy to be here, but I first would like to say I am sorry. If it makes you feel better, when I go to other places, they check me,” he said. “In any case… I must apologize. It is a shame that some of the people who came are not here.”

A Shin Bet spokesman later said in a text message that the body’s agents provide security at all events that Ya’alon attends because he is a former defense minister.

Wasserman confirmed the spokesman’s comment in a phone call, but said the Shin Bet had heightened its security protocols at the event in Tamra because a group of protesters against Ya’alon demonstrated across the street from it. 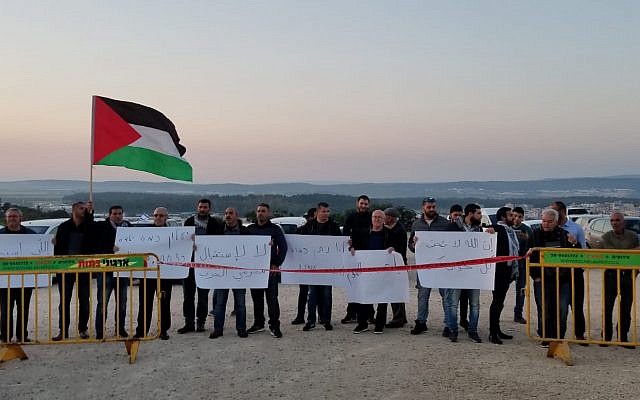 Arab Israelis protest Blue and White’s Ya’alon participating in an event in Tamra on March 3, 2019. (Adam Rasgon/Times of Israel)

“Blue and White was not involved in planning the security measures and we are sorry about what happened,” she said. “The issue was the Shin Bet needed to do more thorough checks because of the protest.”

Opposition to Blue and White

Before the event started, some 20 people stood outside hoisting posters and Palestinian flags.

“Ya’alon, how many children have you murdered until today?” one of the posters read.

Mohammed Sabah, one of the protest organizers, who said he heads a group called “The Popular Committee in Tamra,” said it was unacceptable that locals would welcome Ya’alon to the town.

“He has blood on his hand. That people from our town are welcoming him here is a sin,” he said.

The protesters were not violent.

Inbar Bezek, number 62 on Blue and White’s slate, said that the party recently decided to cancel another event, which was scheduled to take place in Sakhnin on Sunday and feature Ram Ben-Barak, party number 26.

“Some locals said they did not want the event to happen, so it was canceled,” she said.

Later in his speech, Ya’alon criticized the controversial and quasi-constitutional nation-state law, which Arab leaders and organizations have decried.

He said the legislation contravened “the spirit of the Declaration of Independence” because it left out a reference to “the equal rights of all of [Israel’s] citizens,” adding that Blue and White would work to change it.

The law, which the Knesset passed in a 62-55 vote on July 19, enshrined Israel as “the national home of the Jewish people,” recognized Jewish holidays and days of remembrance, and declared Hebrew the state’s sole national language.

The legislation included no reference to the equality of all Israeli citizens, akin to the one made in Israel’s Declaration of Independence — which pledged that the nascent state would “ensure complete equality of social and political rights to all its inhabitants irrespective of religion, race or sex.” 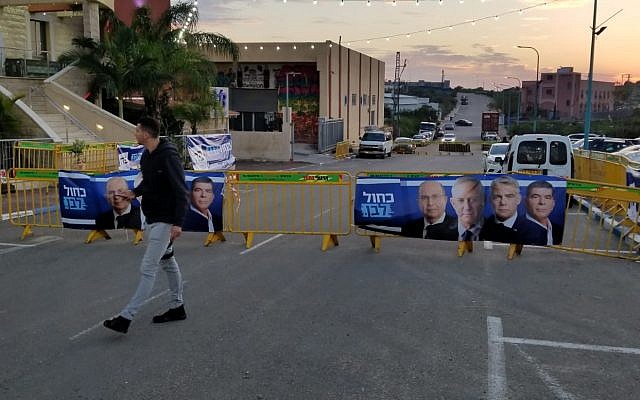 The area outside a hall, where a Blue and White event took place in Tamra on March 3, 2019. (Adam Rasgon/Times of Israel)

Ya’alon also vowed that Blue and White would develop “multi-year plans” that would resolve “all issues related to land, housing and building.”

Arab Israeli communities have long suffered from a shortage in housing. They need some 5,000 new housing units per year, Kais Nasser, a lawyer who advises Arab municipalities, told the Haaretz daily in 2017.

Following his speech, groups of people crowded around Ya’alon, taking selfies and asking him questions.

Kamal Murih, a 64-year-old Daliyat Carmel resident, said he was sure he would vote for Blue and White.

“I’m voting for it because it is our only hope to get rid of Netanyahu,” he said. “I also like their position on the nation-state law and believe their top leadership, which includes three former chiefs of staff, is very solid.”

In addition to Ya’alon, both Gantz and Gabi Ashkenazi, the number four candidate on Blue and White’s list, served as IDF chiefs of staff.

“I wanted him to make stronger statements,” he said. “Why just amend the nation-state law? It should be done away with altogether. I think he’s afraid the right will attack and call him a leftist if he takes positions close to what we believe.”

By the time Ya’alon left the building, the Shin Bet agents had nearly finished packing up their equipment and the protesters across the street had dispersed.