The scenes from Washington on Wednesday were astonishing.

A smoke-filled Capitol Hill, lawmakers in the heart of American democracy cowering under their seats as security officials, guns drawn, hold the doors against violent rioters.

A president refusing to concede the election he lost and promising his supporters, “We will never give up. We will never concede.” His followers, at his explicit instructions, marching down Pennsylvania Avenue to demand that “weak” Republican senators refuse to certify the vote.

Wednesday’s events were not an unplanned, spur-of-the-moment paroxysm of fury. The storming of the Capitol was planned and coordinated on social media. Some protesters appeared ready to take hostages, arriving at the Capitol with stacks of zip ties in their bags. One man interviewed in the New York Times reflected the views of many in the crowd when he declared he had arrived for the “second American revolution.”

There was violence both inside and outside the Capitol building, as when media crews were attacked and saw their equipment destroyed. 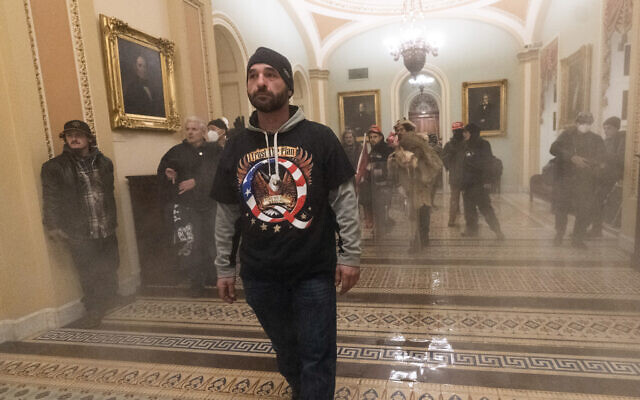 Smoke fills the walkway outside the Senate Chamber as supporters of US President Donald Trump are confronted by US Capitol Police officers inside the Capitol, in Washington January 6, 2021. (Manuel Balce Ceneta/AP)

Anyone following the footage soon lost track of the number of virulent anti-Semites and racists who turned out. T-shirts declared, “6MWE,” or “6 million wasn’t enough.” One man sported an “Auschwitz camp” sweater.

Several individuals, including those who barged into House Speaker Nancy Pelosi’s office and took selfies with their feet on her desk, were later identified as known neo-Nazis and Holocaust deniers. One man interrupted an Israeli television crew’s broadcast to shout at the reporter about Jewish conspiracies. A Confederate flag was carried through the halls of Congress for the first time in America’s history.

And for hours, no condemnation came from the same president who had urged the protesters to show strength, to “never concede.”

It was a desecration of the Holy of Holies of American democracy. And it made no sense.

After the dust had settled and Capitol Police had regained control of the complex, Congress resumed its vote and certified Joe Biden’s Electoral College win. All Trump’s efforts to question and challenge the results ended in the hours after the violence and mayhem. 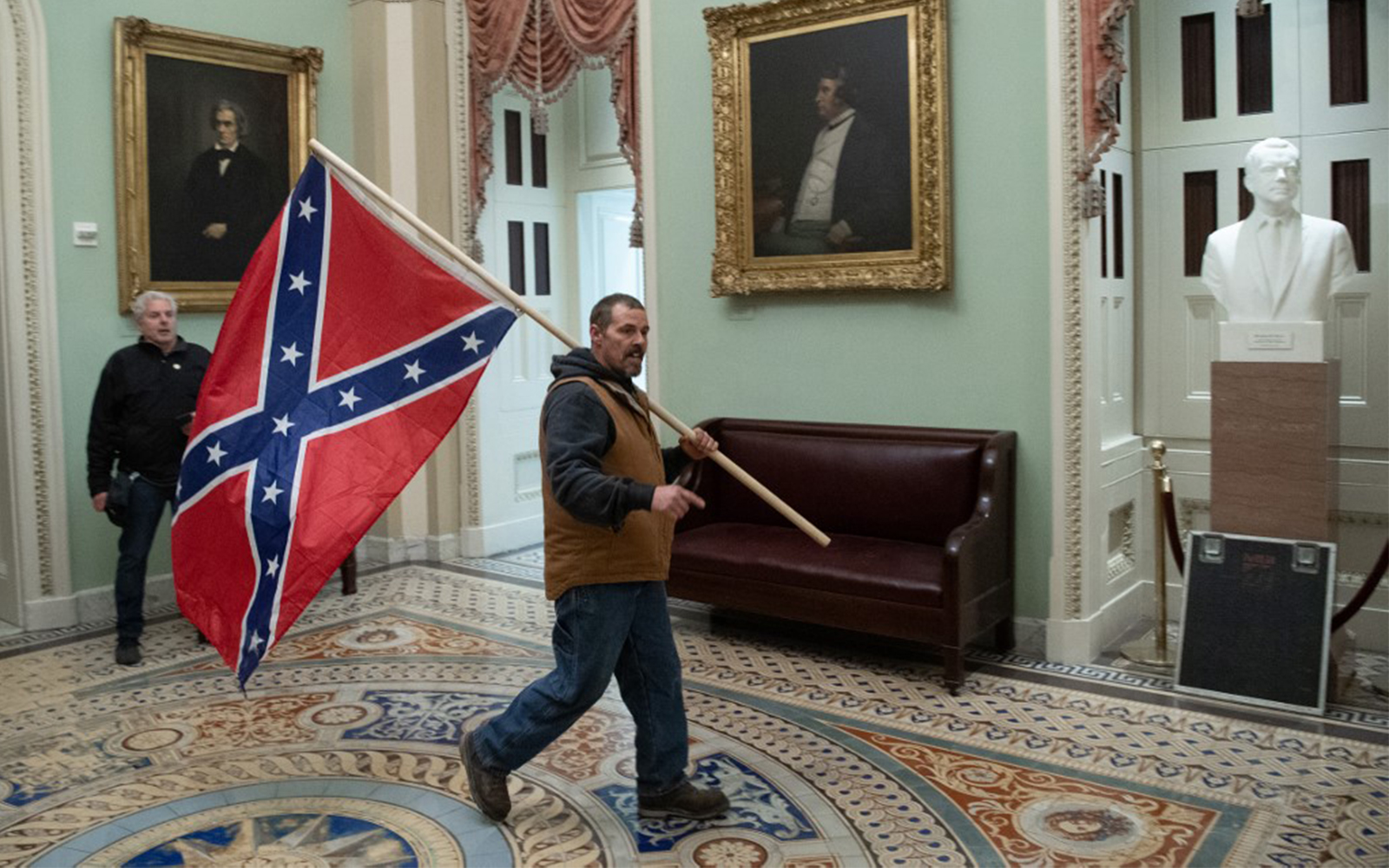 A supporter of US President Donald Trump carries a Confederate flag in the US Capitol Rotunda in Washington, DC, January 6, 2021. (Saul Loeb/AFP)

The Islamic State terror group was already famously extremist and violent when it embarked on a new policy in 2014 of gruesome, televised beheadings shared far and wide by IS operatives on social media.

The beheadings were ostensibly carried out to avenge Western misdeeds or extort governments like the Philippines to leave the US-led anti-IS coalition.

But the videos had another purpose, one that Westerners had trouble grasping at first sight. They were recruitment videos.

At first glance, the beheadings seemed counterproductive for the Islamic State. They undermined any claims it had to moral purity, they horrified the populations IS sought to rule, and they removed any doubt in Western minds about the moral validity of the ensuing years of bombing campaigns against the terror group. 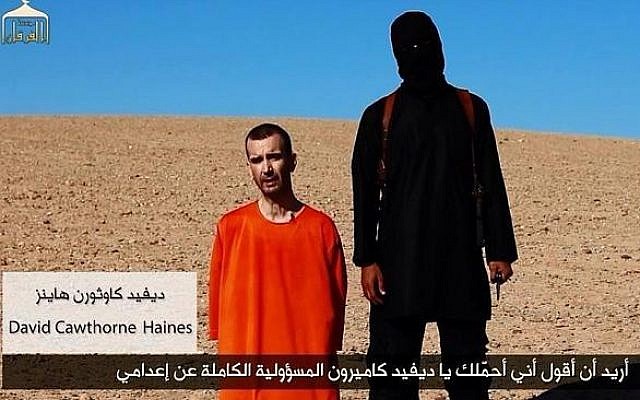 Screenshot from video ostensibly showing the beheading by Islamic State of David Haines in September 2014.

So why do it? And why turn the gruesome spectacles into such a central part of the group’s messaging and brand identity?

The answer carries lessons for Wednesday’s events in the US Capitol.

Islamic State used its gruesome theatrics to carry its message beyond the capabilities of its social media operation — to those young men around the world who might be fascinated and attracted to the spectacle of power over the powerless.

The message, roughly speaking, was: “Is your life stiflingly small? Do you want to break free of the narrow moral and economic confines of a small Western life and seek your fortune in the violent, romantic jihad for global dominion and purification? Then join us.” 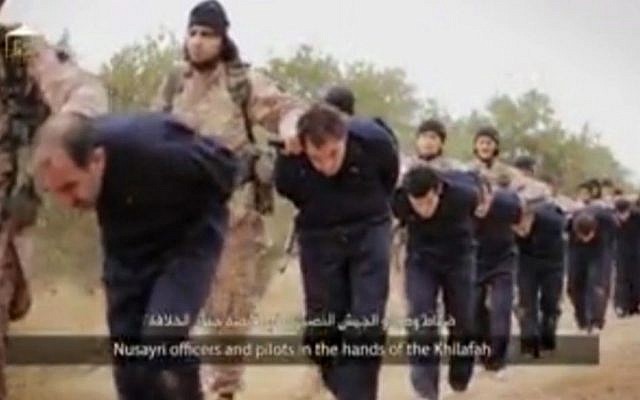 This still image taken from an undated video, published on the Internet by Islamic State terrorists on November 16, 2014, purports to show IS marching Syrian soldiers before beheading them. (photo credit: AP)

It was a promise of power, accompanied by the laundering agent of moral puritanism.

And the moral horror it sparked in Westerners wasn’t a downside, it was the point. It was the vital element that carried the recruitment message to every corner of the earth.

To understand Wednesday’s assault on the US Congress, it helps to grasp just how useful moral horror can be to a radical political movement.

It must be said right off the bat: Nothing said here is meant to compare Americans to the Islamic State. This isn’t about the content of the American political debate, its culture wars or the social and economic trends that have driven Americans to support or reject Trump. The point here is a simpler one about the strategic uses of moral outrage. 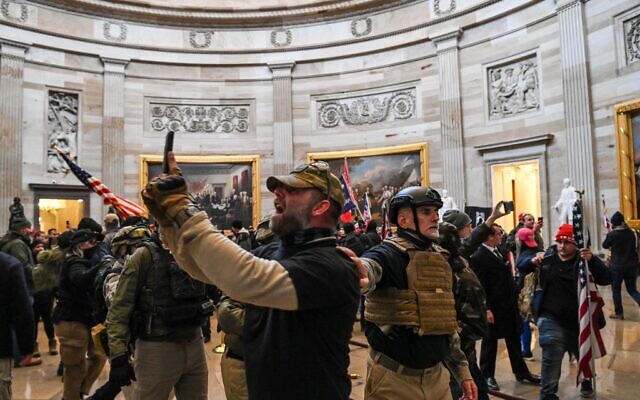 Supporters of US President Donald Trump enter the US Capitol’s Rotunda on January 6, 2021, in Washington, DC. (Saul Loeb/AFP)

Like the Islamic State’s beheadings, the brazen attack on America’s democratic institutions was televised by the very people carrying it out, who pointedly took and disseminated identifying selfies of themselves committing their crimes.

And that’s no accident. These self-identifying assailants were not, as many observers concluded, “stupid.”

Nor is Donald Trump “a moron” for his stubborn refusal to accept the results of the November election. And no, he’s not crazy either, as some administration officials have hinted to reporters in recent days, expressing the view that the president had “lost it.”

Trump, like his selfie-loving supporters, is an altogether savvier politician and may have gotten exactly what he wanted from Wednesday’s chaos. 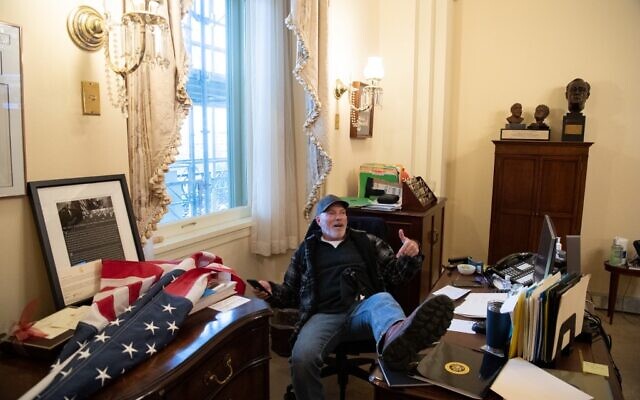 Richard Barnett, a supporter of US President Donald Trump, sits inside the office of US Speaker of the House Nancy Pelosi inside the US Capitol in Washington, DC, January 6, 2021. (Saul Loeb/AFP)

In happier times, elections come and go and the loser is cast aside by their party in preparation for the next round.

But what happens if the loser doesn’t actually lose, but has his purported “landslide victory” stolen from him?

It suddenly becomes a lot harder to cast him aside.

With his accusations of election fraud, Trump has managed a remarkable achievement over the last two months. He built a narrative among the Republican base that enabled him to maintain his hold on the party and to raise the political costs for any Republican leader who tries to distance himself from him. By refusing to have lost, he is refusing to fade away.

Or as he put it in a statement acknowledging Congress’s final approval of the Electoral College results, “While this represents the end of the greatest first term in presidential history, it’s only the beginning of our fight to Make America Great Again!” He’s not going anywhere. 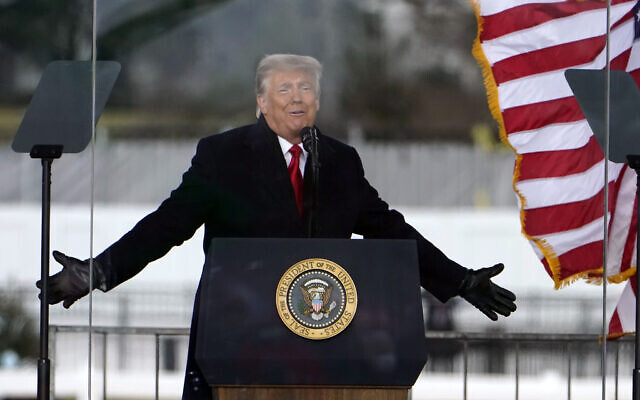 US President Donald Trump speaks at a rally of his supporters in Washington, January 6, 2021. (Jacquelyn Martin/AP)

Trump called those protesters to Washington on Wednesday with a clear purpose in mind: to challenge the lawmakers voting to certify the Electoral College results.

In a speech to the assembled activists before the storming of the Capitol, Trump told them, “We’re going to walk down Pennsylvania Avenue, and we’re going to the Capitol… We are going to cheer on our brave senators and congressmen and women, and we are probably not going to be cheering so much for some of them — because you will never take back our country with weakness.”

That “weakness” was a jab at Republicans, not Democrats. “The Democrats are hopeless,” Trump explained. But many Republicans needed to be browbeaten for their refusal to back his efforts to overturn the November vote.

Trump’s son, Donald Jr., who spoke before his father, openly threatened to mount primary challenges against any disloyal Republicans. “We’re coming for you,” he declared — to fellow Republicans. 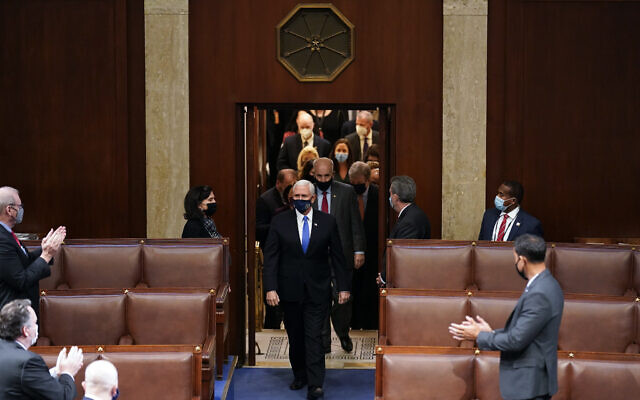 Vice President Mike Pence walks onto the House floor to officiate a joint session of the House and Senate to confirm Electoral College votes at the Capitol, Jan 7, 2021, in Washington. (AP Photo/Andrew Harnik)

Two intertwined events took place in Washington on Wednesday. Trump summoned his supporters for a moment of political theater that served his bid to maintain a stranglehold on the Republican Party despite his election loss. Those supporters — a motley collection of the hardest of hard-core activists of his MAGA movement, as well as assorted bigots and violent extremists — used Trump, in turn, to bring their own message to the national stage.

Trump did not condemn the assailants who stormed the US Capitol in the middle of the certification vote until Thursday night, long after the mayhem ended. They were his army, and their very fervency was a message to Republicans.

And those protesters proudly strutted their racism and conspiracy theories around the Capitol — because that was their message to others of their kind. The sheer audacity, the breaking of political and social taboos, the violence, the instigation of moral horror in the clash with establishment orthodoxies, all carried a simple message to susceptible ears around the country who would not otherwise have been exposed to it: “Join us.”

And all those horrified at Trump’s rejection of the election results and at the protesters’ violence in the Capitol building: they are the channel on which the message travels. 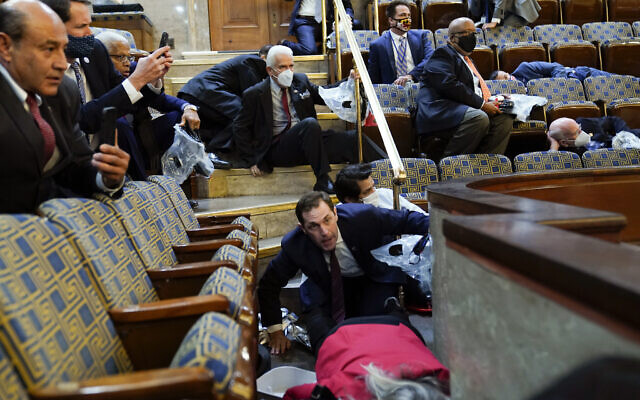 People shelter in the House gallery as protesters try to break into the House Chamber at the US Capitol on Wednesday, Jan. 6, 2021, in Washington. (AP Photo/Andrew Harnik)

And the Republican Party, after leaning into Trump’s peculiar brand of politics for four long years, was reaping the whirlwind of its own — what did Trump call it? — weakness.