In March 2010, in the midst of a visit by the vice president of the United States, Israel announced the initial approval of 1,600 new homes in a Jewish neighborhood of Jerusalem outside the pre-1967 lines.

Joe Biden (for it was he) was furious. President Barack Obama, under whom he served, had repeatedly and publicly made clear his opposition to Israeli building both in West Bank settlements and in Jerusalem neighborhoods beyond the pre-1967 Green Line. And now here was Benjamin Netanyahu (for it was he) apparently insulting the administration by timing a major construction announcement to coincide precisely with the VP’s visit.

Except that this wasn’t actually the case. The approval for Ramat Shlomo’s new homes was not issued by the Prime Minister’s Office, but rather by a lower-level planning committee overseen by the Interior Ministry. The interior minister of the day, Shas’s Eli Yishai, likely didn’t even realize that Ramat Shlomo was over the Green Line (I kid you not). Netanyahu was almost certainly unaware that the decision was about to be announced. He had no desire to pick a fight with Biden, and had only days earlier telephoned Nir Barkat to tell the then-Jerusalem mayor to drop an incendiary project to redevelop the Silwan area outside the Old City.

Biden had his officials look deeper into what had happened, and they doubtless told him all this. They doubtless told him too that Ramat Shlomo was an ultra-Orthodox neighborhood founded by the late Yitzhak Rabin that was already home to 20,000 people, in a part of the city that Palestinian Authority President Mahmoud Abbas was well aware would never be relinquished by Israel. 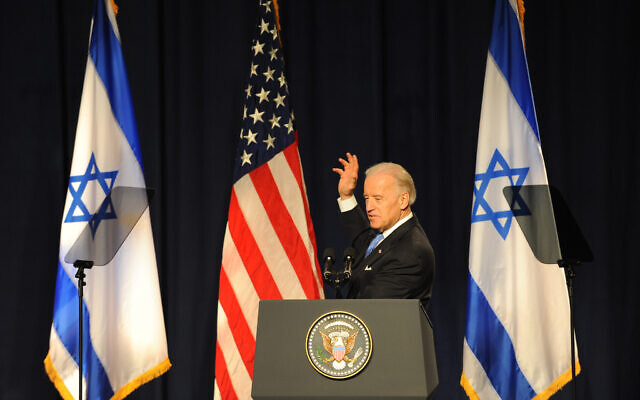 In the main address of his visit, at Tel Aviv University, Biden condemned the new building plans, highlighting that what was most galling was the surprise and the apparent breach of trust. But he also vouchsafed that Netanyahu had apologized both for the timing and for not letting him know in advance, and said he had been assured that the building work would not start for years, thus leaving time for the Obama administration’s efforts to broker peace talks. “I can’t tell you that peace will come easily,” said the vice president at the conclusion of that address. “You know better.”

With that, the vice president made clear that the incident was closed.

At least as far as he was concerned.

Evidently, however, Obama was not assuaged. That weekend, at the president’s instruction, Hillary Clinton, the secretary of state, telephoned Netanyahu and, in a reportedly blistering 43-minute call, asserted that Israel had insulted America, had threatened to undermine the very essence of the bilateral relationship, and needed to demonstrate afresh its good-faith commitment to that partnership. The angry fallout continued into Sunday’s US political talk shows, where White House adviser David Axelrod popped up to issue further criticisms. 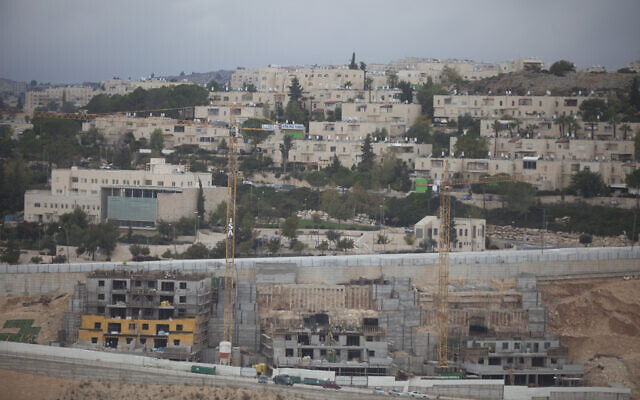 Flash forward a decade. Those Ramat Shlomo homes have long since been built, and now it’s Joe Biden who will have the last word on the direction of American relations with Israel — an Israel still led by his old sparring partner Netanyahu. My hope is that Biden’s handling of the Ramat Shlomo incident, including that declared awareness that peace won’t come easily, will be a guide.

The last time around

The US under Obama clashed heavily and relentlessly with Israel under Netanyahu in two central areas — the Palestinian conflict and Iran’s nuclear weapons ambitions.

On the Palestinians, the administration criticized any and all Israeli building over the Green Line, including in Jewish neighborhoods in East Jerusalem such as Ramat Shlomo, rather than focusing on preventing the expansion of settlements in West Bank areas Israel would ultimately need to relinquish in order to separate from the Palestinians and maintain a Jewish, democratic state.

More significantly still, Obama and his (second) secretary of state John Kerry insistently underestimated the devastating impact on Israel, physically and psychologically, of the Second Intifada — the strategic onslaught of suicide bombings that killed 1,000 Israelis and were launched from the major West Bank cities that Israel had relinquished under the Oslo process. 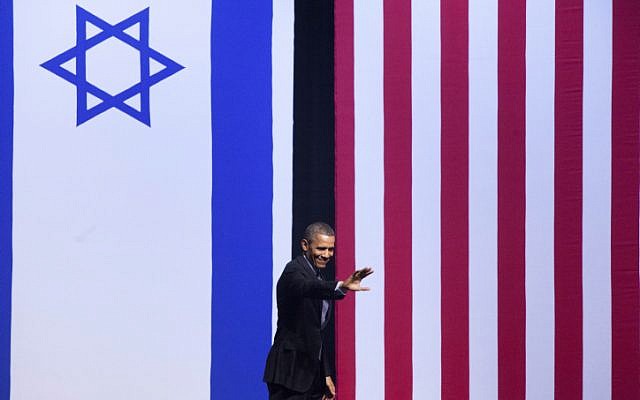 US President Barack Obama waves to the crowd after addressing Israeli students at the International Convention Center in Jerusalem, March 21, 2013 (Yonatan Sindel/Flash90)

Everybody recalls Netanyahu going to the US Congress in 2015 to lobby against Obama’s Iran deal; most people have forgotten Obama coming to Jerusalem’s International Conference Center (Binyanei Ha’Uma) in 2013 to lobby against Netanyahu’s ultra-skeptical approach to negotiating with the Palestinians: “Peace is possible,” the US president assured a carefully chosen audience of young Israelis. “I know it doesn’t seem that way. There will always be a reason to avoid risk, and there’s a cost for failure. There will always be extremists who provide an excuse to not act. And there is something exhausting about endless talks about talks; the daily controversies, and grinding status quo.”

On Iran, meanwhile, Obama and Kerry wanted to believe that the promise of international rehabilitation, rejoining the family of nations, would help deter the Islamist regime from pursuing the bomb. They thus negotiated and approved an agreement, many of whose core provisions apply for a limited period only, that neither fully dismantled nor even completely froze the Iranian program. The ayatollahs were allowed to improve their uranium enrichment process and refine their missile delivery systems within the terms of the 2015 deal, which they were also handsomely financially rewarded for signing.

Rapacious ideologically and territorially, the Islamists in Tehran are playing the long game. They don’t want to rejoin the family of nations. They want to sit at the head of the table, set the agenda, and bend the rest of the world to their will. This harsh truth seemed lost on the Obama presidency. 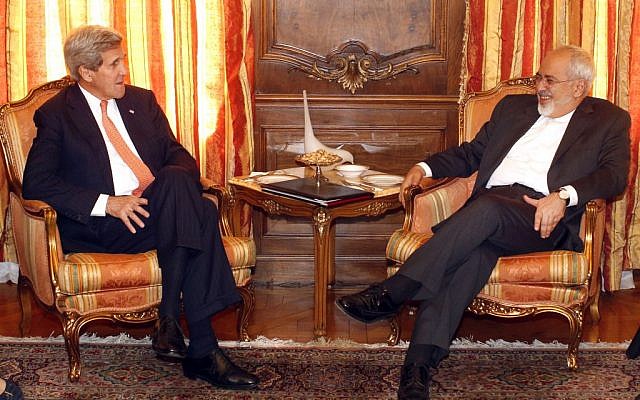 While he settles in

If you’ve read my recent articles, you’ll know how I feel about US President Donald Trump’s behavior surrounding last week’s presidential elections. But that does not change the fact that 70% of Israeli Jews said shortly before the vote that they considered Trump the “preferable” candidate, as far as Israel’s interests are concerned, for clear, solid, sensibly self-interested reasons. 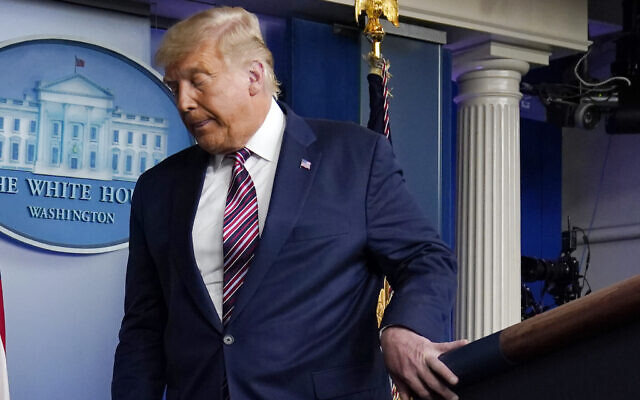 US President Donald Trump leaves after speaking at the White House, in Washington, November 5, 2020. He claimed the presidential election was rigged, he had won, and his victory was being stolen. (Evan Vucci/AP)

Those reasons notably include his administration’s handling of the Palestinian and the Iranian issues. On the first, while ultimately blocking Netanyahu’s unilateral West Bank annexation plans, Trump’s White House made plain to the Palestinians that they would need to compromise on their maximalist demands, stop playing the victim game and end their demonization of Israel. And on the second, it ratcheted up the financial pressure on Tehran and urged a new deal that would, this time, genuinely require the regime to abandon its nuclear goals.

As a consequence of those broad strategies, the Palestinians are being marginalized by former steadfast supporters in the Arab world, who are instead normalizing relations and joining forces with Israel in the effort to face down Iran. And the ayatollahs are feeling the financial heat.

The incoming US president will have a vast burden of domestic priorities with which to grapple. But there is already much talk of him rejoining the 2015 Iran deal, which was negotiated under his vice-presidential watch and from which Trump withdrew.

And West Bank Palestinian leaders, who severed all relations with the Trump administration for its temerity in recognizing Jerusalem as Israel’s historic and modern capital, and preemptively rejected his peace plan, are delightedly contemplating the return of a US administration they believe will be more empathetic to their ambitions, more inclined to indulge their ongoing demonization of Israel, more willing to give them financial aid even as it is siphoned off to make payments to the families of terrorists, and more forgiving of their obduracy. 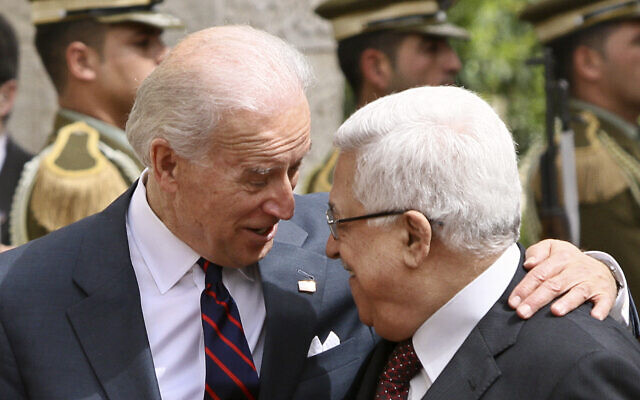 At home, Biden will be inheriting a bitterly divided America, succeeding a president who, at this point, seems determined to resist the will of the people. Abroad, where Israel and this region are concerned, however, the Trump administration bequeaths him a far more realistic approach than it inherited.

I don’t expect Biden — the most experienced incoming president since George H.W. Bush in 1989, and no neophyte when it comes to this region — to be guided by that “you know better” remark at the end of his Tel Aviv speech a decade ago. I also don’t think the status quo is beneficial on the Palestinian front (as Israel entangles itself more deeply with millions of hostile Palestinians) or on the Iranian front (as the ayatollahs continue their pursuit of the bomb). But, at least while he settles in, he might want to consider a Middle Eastern diplomatic application of the Hippocratic Oath: First, do no harm.

** An earlier version of this Editor’s Note was sent out Wednesday in ToI’s weekly update email to members of the Times of Israel Community. To receive these Editor’s Notes as they’re released, join the ToI Community here.