Reyna paused before the green gate and looked carefully to the left and to the right before entering the well-kept garden half-way up Masaryk Street. It was hard to shake the feeling that there was a film crew nearby and that she was an actress in the opening scene of a new television series. As a teenager, when she watched Srugim religiously, she had fantasized that she, too, was a fictional character in a witty and poignant serial drama set in the German Colony. As she walked from home to school or from school to Bnai Akiva, she’d imagine herself in the sequence that comes before the title of the episode. Then she’d turn a corner, open a door, or enter a yard. She had never been able to imagine what happened after that.

The sun, hanging over the post office, to the west, was obscured by the dusty clouds of Jerusalem’s late spring. She took a deep breath, pushed open the gate, and walked in. The garden, in the full flower of June, was tended lovingly, she knew, by Professor Nili Rogashov, author of celebrated works on Jewish women in medieval Ashkenaz, who was not now tending the garden because she had left just this morning for a conference in Leiden. Professor Nimrod Stav, of the Hebrew University’s Department of Hebrew Literature, who was supervising Reyna’s doctorate, had suggested that this afternoon would be a good time to come by.

She jumped—just a bit, it wasn’t in the script—when he opened the front door while her hand was still poised in the air to knock. He was dressed as the wardrobe manager had specified—a conservative blue button-down long-sleeve shirt, with two open buttons at the top revealing a tuft of gray chest hair. There were black slacks and the signature argyle socks, no shoes. His hair was pepper-gray and short and looked as if it had been trimmed earlier in the day. Reyna was always surprised to find him shorter than he appeared in her mind, really the same height as she was. He was trim and fit and quite good looking. She counted her blessings. Imagine having to do it with a professor who was flabby and wrinkled.

He welcomed her warmly and she followed him to up to his second-floor study, lined with neatly-shelved books. A well-ordered desk stood on one side and a folded in fold-out couch under the window. The curtains were drawn. She sat on the couch and he sat on the office chair by the desk. He smiled, placed his hands on his thighs, and looked at her intently and fondly. 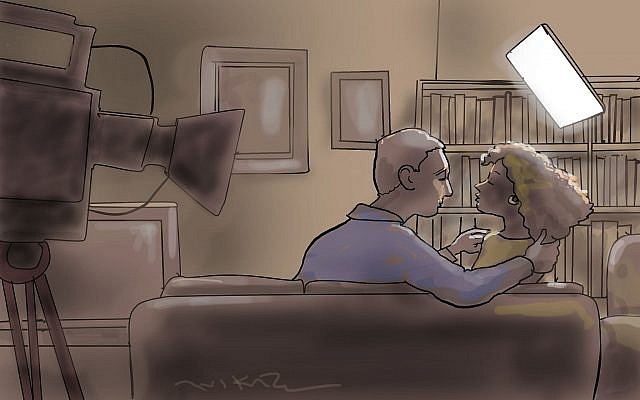 Illustration above and top by Avi Katz

“At your service,” he said, his eyes sparkling. “Even to half the kingdom, it shall be granted you.”

She forgot her lines. Professor Stav—that is, Nimrod—didn’t allow the pause to go on for two long.

Her head felt very heavy, so it took a lot of strength to move it. But she managed to nod.

“I have long believed that this unique Israeli academic custom says something important about our culture,” Nimrod said.

“You miss an exam because you have reserve duty, or because your job didn’t allow you time to study properly, or because,” and here he nimbly rose from his chair and seated himself on the couch next to her, “you are about to get engaged.” She glanced at him and slowly shook her head. “At Harvard, or Oxford, or even the Sorbonne, if I’m not mistaken, that would be that. You fail the course. Here, we give second chances. You didn’t give the right answers on mo’ed alef, on the first date? You can prepare them for mo’ed bet.”

Reyna nodded, but could not speak. She thought: It’s like in film. The shot wasn’t satisfactory? It didn’t work dramatically? You forgot your lines or went out of character? You do it again.

This was no time for stage fright, she lectured herself. You are a grown woman, a young scholar of promise, and you have made a carefully-considered rational decision that you are now about to act on. She looked straight into the camera, smiled, and shifted to her right to face her nemesis, and took one of the hands in which Nimrod Stav held her career.

“Yes, mo’ed bet, Nimrod,” she said. She felt a flutter of elation in her stomach at just how loud and clear her diction was.

“And what about …” Nimrod thought deeply for a minute. “Shai, I believe is his name? Career officer, right?”

“My business, not yours,” Reyna said curtly, as she warmed to her part.

“As you wish,” Nimrod said as he nonchalantly moved his left arm up so that it lay on the back of the cushions behind, but not yet touching, her.

“I just want you to know,” he said, “in case you don’t know already, that is.” He allowed a pregnant pause and then went on. “I have been very stern with colleagues who have exploited their position as teachers to get students into bed with them. I mean both men and women, with both men and women, in all combinations.”

Reyna winked inconspicuously at the script writer, in appreciation of this unexpected irony. A masterful little twist, she thought to herself.

His fingers touched her right shoulder. He aimed an uncharacteristic bashful smile at her. “These are people who think only about sex and power. They are contemptible in my eyes.”

She moved her shoulder up to meet his fingers.

He turned to look into her eyes. “Unlike us, they know nothing of love.”

She really needed to work on her on-camera kissing. As much as she got into character, she had a hard time integrating this essential part of it.

“How wonderful that you came today,” Nimrod said softly, stroking her hair.

She lowered her eyes. “How wonderful that Nili had a conference,” she murmured.

He lifted her chin up with a finger. “We need to be perfectly honest with each other,” he said gravely. “Nili and I are mature lovers. We have lived together for, what is it, sixteen years? And neither of us intends to move on. We truly love each other. But we do not feel that this precludes either of us from loving others. Do you understand?”

“I don’t believe in flings.” He placed a hand on her thigh. “They are cheap and undergraduate. But not every love need be forever. A true love that lasts just three or four days is no less true than one that lasts a lifetime. Do you understand?”

In a previous version of the script, this was the point where she said: “Yes, I understand that I am going to sleep with you for three nights and that you will recommend the approval of my thesis and arrange a research position for me.” But clearly that did not fit into this new concept of Nimrod that the scriptwriter had settled on.

She giggled, as if that was exactly what she had wanted to hear. “I understand.”

“Indeed, there is no reason at all for you not to get engaged to Shai. Of course, I understand that in the community you come from you can’t be as open with him about our feelings for each other as I can be with Nili.”

“Who knows,” she told him. “Maybe after this week he won’t live up to my new set of expectations.”

Nimrod laughed. “Very nice of you to say that. But perhaps it’s time for actions, not words.” He held out her hand and led her out of the study and into the bedroom.

Reyna did not know exactly what happened there, because of course there was a double who did the sex scene. But then the positions used, the places caressed, the groans and moans, and the pillow talk afterward were of little consequence. The foreplay and afterplay and all that were incidental to what was really important, which was that she was going to get her PhD and a research position at Hebrew University. Tenure track, given the amount of time they spent in there. Then she could marry Shai, have the wonderful family they had spoken of so much.

Which she did. There were four boys, one serious, one wild, one dreamy, one needy. Shai and she began ecstatically and settled into a mature love based on mutual admiration, respect, and wonder, very different from the mature love Professor Nimrod Stav had described. Nimrod himself had never demanded anything more from her after those three nights, and proved to be an ardent and indefatigable champion of her scholarship (“Which I can only do because it is, truly, of the highest quality, both rigorous and innovative,” he insisted.) Pancreatic cancer took him suddenly, but only after she was firmly ensconced in the Hebrew literature department at Hebrew University and in the field at large. Reyna marveled at each plot development in what was now, clearly, a series that had lasted for multiple seasons and was still going strong.

Of course, she knew that the plot structure demanded that Shai would find out. Given the small size of the Israeli academic community, and its gossip-ridden character, it could hardly be otherwise. Indeed, Shai must have heard rumors and allegations over the years, but never said anything.

But then another of Nimrod’s great but short-term loves, who had gone on to write trail-blazing literary analyses of midrash, passed on. A couple years later her husband, a colleague of Reyna’s, published a tender but tell-all memoir. Reyna’s name appeared among the long list of Nimrod Stav’s conquests.

Reyna waited for the camera to zoom in on her tear-stained face. “Shai, imagine what kind of life we would have had if I hadn’t. I would have been bitter, unfulfilled, full of unrealized potential, just another frustrated wife and mother.”

“At first I said no,” she said. “But then I went back. Otherwise, I would have failed.”