Through his more than 14 years in office, some Israelis grew to love, and others to loathe, Prime Minister Benjamin Netanyahu. But few doubted that he knew what he was doing, and that this basic competence was reflected in the activities of the governments he has headed.

That has changed in the last few days, during one of the most challenging domestic periods in modern Israeli history, when the government is charged with battling a pandemic and its fallout, including the unprecedented meltdown of much of the economy.

It’s a dangerous shift in any democracy when the electorate loses confidence in its leadership, and most especially in an embattled country such as Israel, where that confidence is a crucial component in national resilience, in the willingness to act at potentially personal cost for the greater good of the nation.

But that is precisely what we are now witnessing. 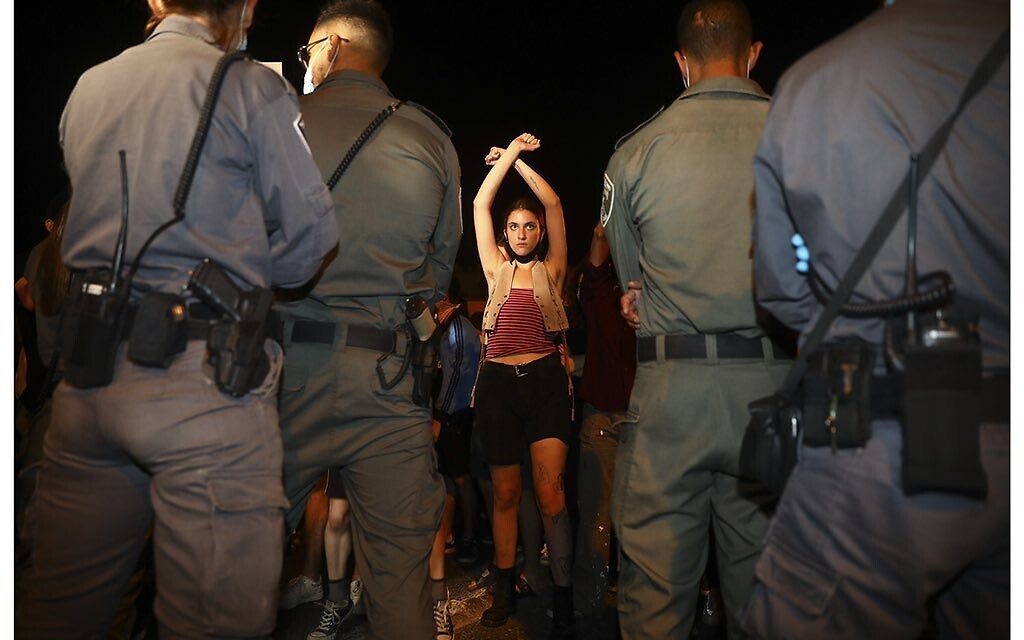 The new mood of shaken faith is making itself plain in all manner of guises and areas.

One of them, perhaps not hugely significant but highly symbolic, began a week ago, immediately after the prime minister appeared on television on July 15 to announce that he was putting together NIS 6 billion ($1.75 billion) in indiscriminate handouts to all Israelis. The idea made no sense: The goal stated by Netanyahu was to get the money out fast, in order to get the wheels of the economy turning again. But by promising the cash to all, he was subverting that aim, since wealthier Israelis wouldn’t rush to spend the extra money, while poorer Israelis, desperate for government assistance, were being short-changed. 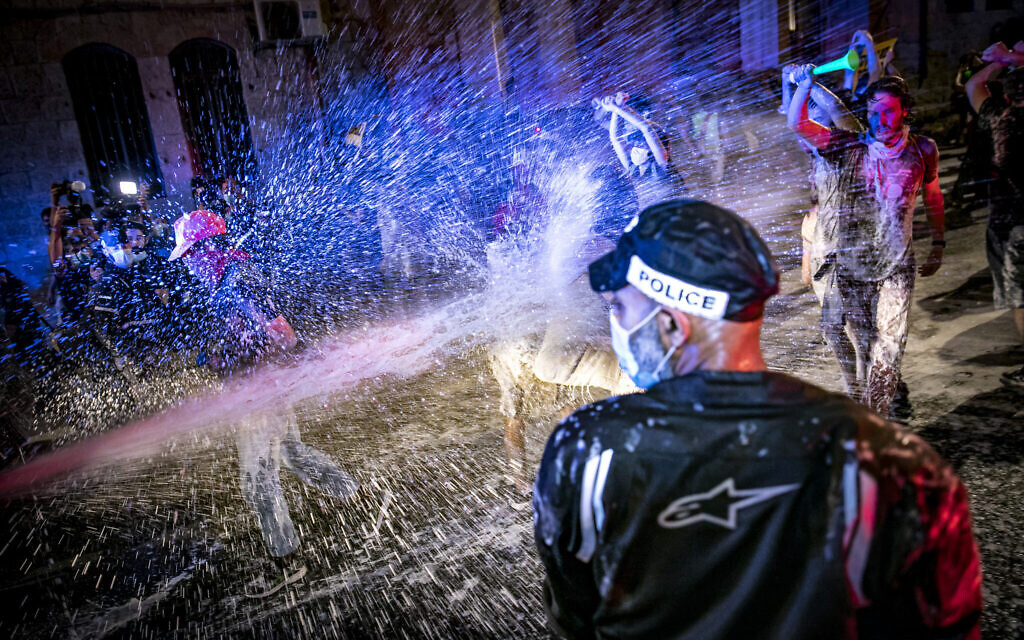 Recognizing that the plan was half-baked, various groups and individuals laudably coalesced to try to mend it — to put in place mechanisms whereby those who didn’t need the money would donate it to those who did, and large numbers of Israelis signed up to do just that. But as of this writing, the “immediate” handouts have gone nowhere.

First, a hurried ministerial rethink prompted the introduction of some limits on who would get the cash, with the biggest wage-earners to be excluded. Then the government hit new snags — reportedly discovering that its computers cannot easily sift out the big earners from the rest, and that it doesn’t have the bank account details of a significant proportion of its citizens. Now, there is talk of further allocations for those most in need.

The discomfiting evidence of a leadership disconnected from those it is supposed to serve mounted the very next day. Meeting from late last Thursday night until the early hours of Friday morning, the prime minister and his colleagues emerged from their video-conferencing to order the nation’s restaurants shut down until further notice, with the exception of deliveries and takeout, as of 5 p.m. on Friday afternoon. 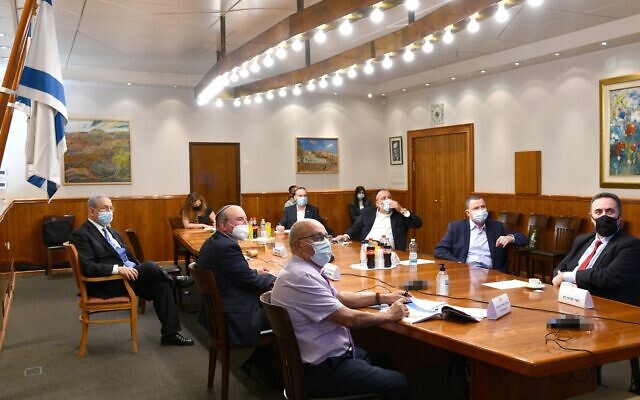 Prime Minister Benjamin Netanyahu, left, chairs an emergency meeting of senior ministers to decide on measures to curb the spread of the coronavirus, July 16, 2020. (Chaim Tzach/GPO)

Self-evidently, nobody in the biggest, costliest government in the history of Israel knew enough, or cared enough, to realize that giving the restaurant industry 14 hours to close down was an untenable imposition.

Self-evidently, not a single one of the three dozen ministers recognized that restaurants submit orders to suppliers in advance, that they receive deliveries in advance, prepare food, organize staff, take reservations… that the entire industry and its supply chain, already battered and depleted by the ravages of COVID-19’s first wave, should not and could not simply be switched off at a moment’s notice by ministerial decree.

Self-evidently, nobody in the biggest, costliest government in the history of Israel knew enough, or cared enough, to realize that giving the restaurant industry 14 hours to close down was an untenable imposition

And so the restaurateurs — whose industry directly employs an estimated 200,000 Israelis, and is central to the livelihoods of an estimated one million — rebelled. When news of the dictate reached them, as their staffs began to prepare for the day’s services ahead, many of them simply said: No, we’re not doing it. Fine us. Arrest us. Do your worst.

An hour before the shutdown was supposed to come into force, when many law-abiding restaurants had dutifully canceled their reservations, sent staff home, and thrown out or given away food, the government changed its mind, and postponed the closure order to Tuesday morning, causing further havoc. 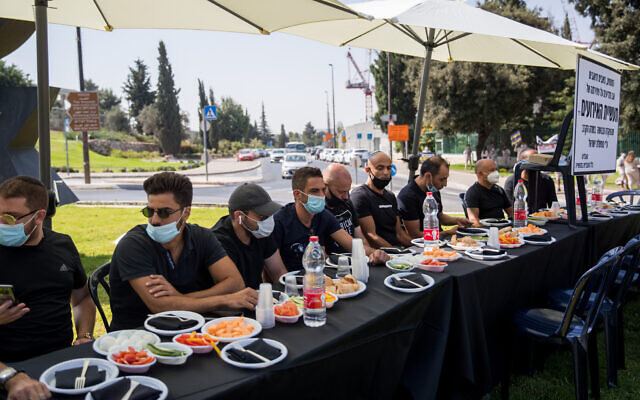 Owners of event halls protest outside the Knesset in Jerusalem to call for financial support from government over restrictions on their businesses due to the coronavirus, on July 21, 2020. (Yonatan Sindel/Flash90)

And on Tuesday, hours after it had come into force, the Knesset Coronavirus Committee, run by a member of Netanyahu’s own Likud party, canceled it again, its chairwoman Yifat Shasha-Biton knowingly putting her job on the line when declaring that she and her colleagues had not seen enough evidence of contagion at restaurants to justify the blanket closure.

In the few hours on Tuesday morning when the order was supposedly in force, most restaurants had ignored it anyway. 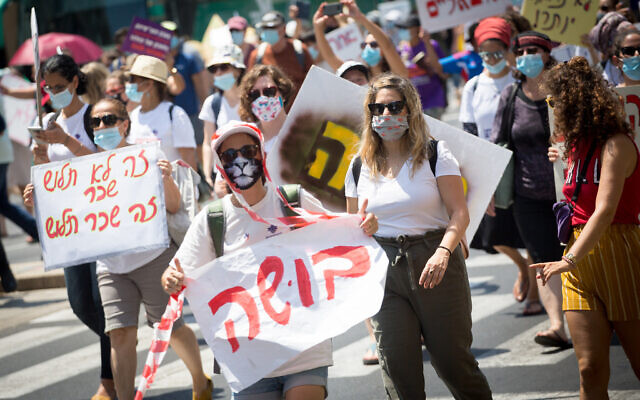 Taking to the streets

In this new climate of declining faith in the competence of government, and declining readiness to automatically heed its rulings, strikes are multiplying — including by social workers and, briefly, nurses, their demands for extra staff in the battle against COVID-19 long ignored and now belatedly met. And demonstrations are growing, and becoming more raucous, by the day.

For years, a small core of mainly middle-aged and older protesters have been maintaining a vigil near the Prime Minister’s Residence, demanding the resignation first of Netanyahu the corruption suspect, then Netanyahu the indicted leader, and now Netanyahu the prime minister on trial. Nobody paid them too much heed. 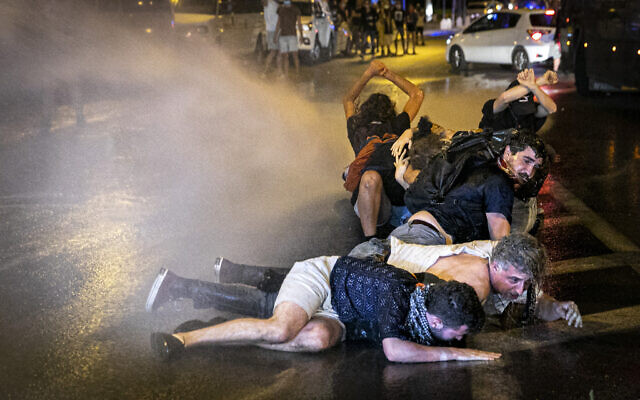 Demonstrators protest against Benjamin Netanyahu outside the Prime Minister’s Residence in Jerusalem on July 21, 2020. (Olivier Fitoussi/Flash90)

But in recent weeks, and especially in recent days, an array of bitter Israelis have swelled the ranks and largely eclipsed the veteran protesters — including independent businessmen, small business owners, the restaurant industry, the entertainment industry, left-wingers, avowed Likud voters, et al — suffering from the financial meltdown and complaining that the government isn’t helping them.

Plan after plan has been grandly presented, but grants to Israelis who have faithfully paid their taxes and their National Insurance contributions through the years, and now urgently need some help in return, have either proved miserly or failed to arrive at all. 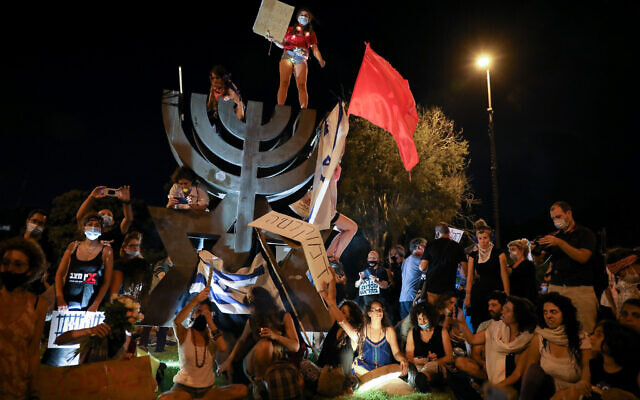 Thousands of demonstrators protest against Prime Minister Benjamin Netanyahu outside the Knesset in Jerusalem on July 21, 2020. (Olivier Fitoussi/Flash90 )

Most recently, students and other younger Israelis have started to dominate the demonstrations — whether with specific grievances or letting off steam amid the virus limitations that otherwise prevent most gatherings.

Thousands marched through neighborhoods adjacent to the Prime Minister’s Residence on Saturday night. They marched to the Knesset late Tuesday night, where a social work student made headlines posing topless atop a menorah sculpture, a police officer made headlines by subduing one demonstrator with his knee, and more than 30 were arrested. Some were still demonstrating Thursday morning, trying to block the entrances to the parliament building. 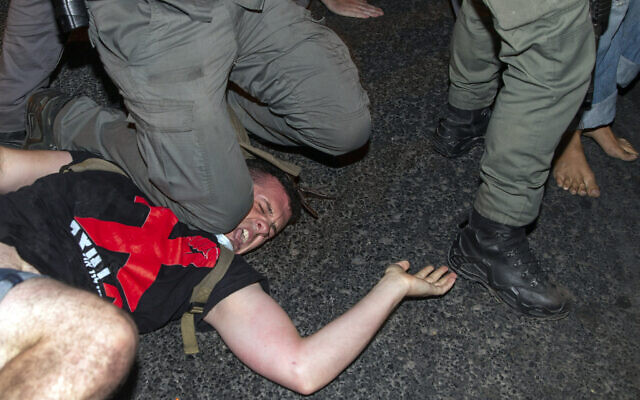 An Israeli police officer puts his knee on a demonstrator to make an arrest during a protest against Prime Minister Benjamin Netanyahu, outside his residence in Jerusalem, July 22, 2020. (AP Photo/Ariel Schalit)

Israelis are capable and perceptive. We saw with the arrival of COVID-19 that the government — particularly Netanyahu — recognized the danger of the pandemic, and was keenly focused on thwarting it. Policy wasn’t perfect — the airport wasn’t properly sealed to arrivals from virus epicenters; communication with the ultra-Orthodox community was poor. But, overall, decision-making was effective, and therefore the public did what it was asked to do.

Not so now. The incompetence is plain for all to see. Ministers and coalition members are openly bickering, with a low point earlier this week when the finance minister (Israel Katz) and the coalition chairman (Miki Zohar), both Likud members, began leveling personal insults at each other during a committee meeting. Medical professionals have been resigning from key operational and advisory positions, complaining that they are not being heeded. The indefatigable Netanyahu appears to have been uncharacteristically distracted, both by his apparently stalled plan to begin annexing West Bank territory on July 1 and, understandably, by his trial.

And now he and his Blue and White coalition partners are, deplorably, playing election games again. 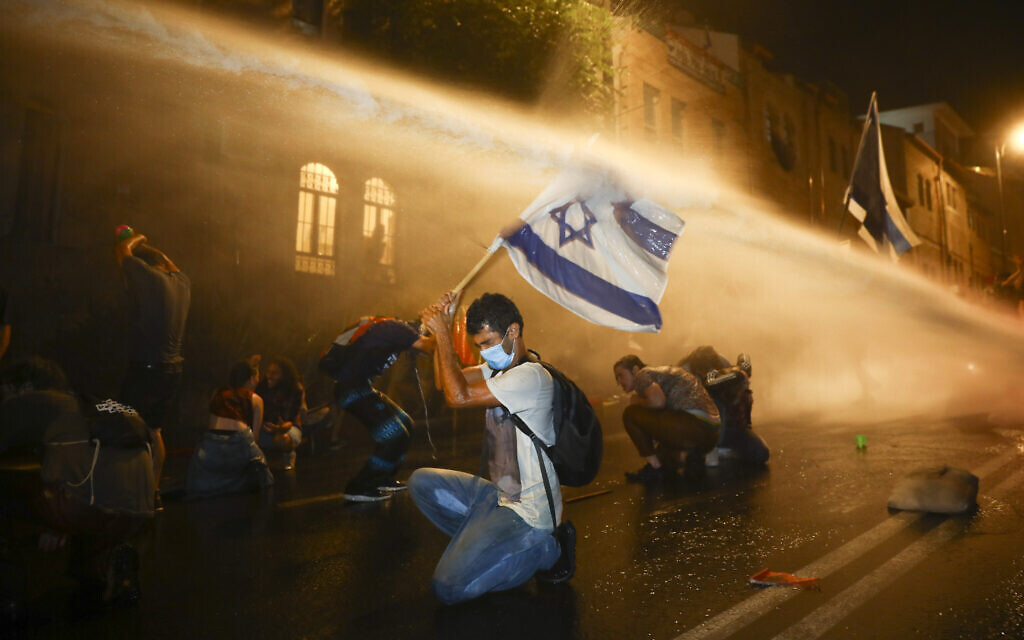 Police use a water cannon against demonstrators during a protest against Prime Minister Benjamin Netanyahu in Jerusalem, July 18, 2020 (AP Photo/Oded Balilty)

The Knesset’s Coronavirus Committee — tasked with overseeing ministerial decisions — overturned the restaurant closures on Tuesday because, Shasha-Biton said, the data it had been supplied by the Health Ministry on the sources of COVID-19 contagion simply didn’t justify the catastrophic economic consequences. A day before, for similar reasons, it had overturned a ministerial decision to close all the beaches each weekend — an order that it said it found incomprehensible and that the government belatedly recognized it could not justify.

In response to the restaurant reversal, Health Minister Yuli Edelstein said the committee was being “childish,” while coalition chair Zohar sniped that Shasha-Biton had “fallen into a trap set by the opposition.” Netanyahu was reported to want to fire her, but legislation rushed through the Knesset on Wednesday went much further than that: The so-called “Great Coronavirus Law” neuters her committee altogether as of August 10, distributes more limited oversight authority among four other committees, and gives the government greater powers to high-handedly impose more of the kind of edicts that have proved so ill-considered and controversial in recent days. 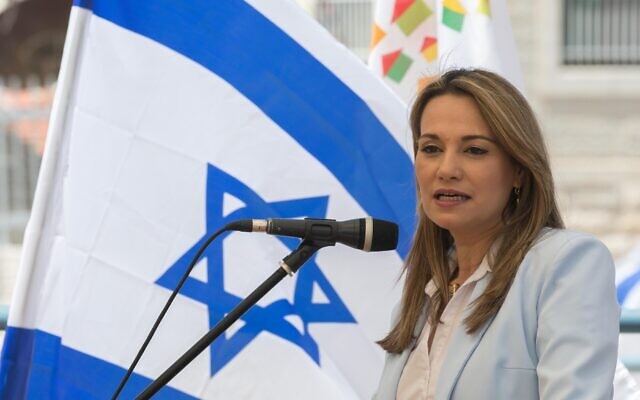 Yifat Shasha-Biton at a Housing Ministry ceremony in Jerusalem on May 18, 2020. (Olivier Fitoussi/Flash90)

The data made publicly available on the spread of COVID-19 is indeed partial and inadequate, as became clear when the Coronavirus Committee hosted the Health Ministry’s deputy director Itamar Grotto to try to make sense of it all on Sunday. And Shasha-Biton, a most improbable rebel, was patently unhappy to find herself moving to reverse the decisions and orders of her own government. But as she said in defense of her panel’s intervention: “The committee cannot vote on anything that we cannot explain publicly.”

That’s a position the Netanyahu government should urgently espouse. Rather than crush concerned, well-meaning dissent with arrogant derision and rushed legislation, it must make a concerted effort to explain its decisions to the public. And if it doesn’t have the necessary information, it should recognize that this points to deeper problems in the handling of the pandemic — problems that the newly appointed coronavirus coordinator will hopefully address right away. The government needs to be sure that it knows what it’s doing. Right now, the public, understandably, doubts that this is the case.

Israel is currently led by a self-styled emergency coalition, established with the specific imperative to battle COVID-19. But the government cannot rule by fiat — even amid a pandemic. Or rather, least of all amid a pandemic, when public trust, and consequent public willingness to cooperate, are vital to protect the nation’s economy, its health, and its resilience. 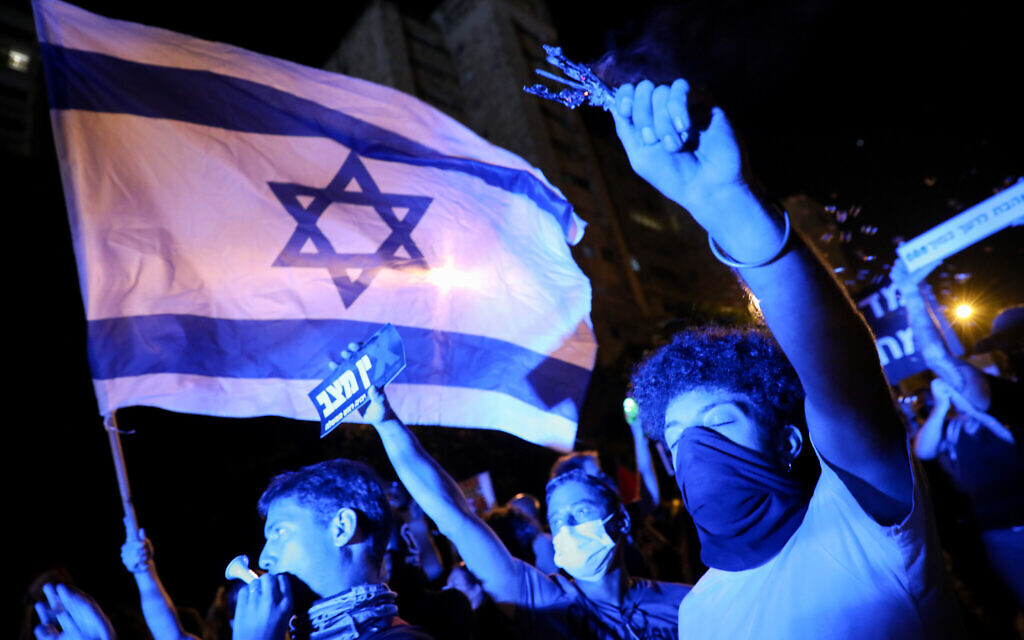 Demonstrators protest against Benjamin Netanyahu outside the Prime Minister’s Residence in Jerusalem on July 21, 2020. (Olivier Fitoussi/Flash90)

An earlier version of this Editor’s Note was sent out Wednesday in ToI’s weekly update email to members of the Times of Israel Community. To receive these Editor’s Notes as they’re released, join the ToI Community here.