As a young teenager in 1998, Abraham Riesman met Stan Lee at a comic convention called Wizard World Chicago. Lee, known as the father of the Marvel Universe, was not yet famous to mainstream audiences.

“I didn’t have to wait a long time in line to meet him or pay for his autograph,” Riesman recalled.

As Riesman stood across the table from a seated Lee, Riesman’s mother Margaret Ross captured the moment with her camera.

“You’ve immortalized me,” commented Lee as the shutter clicked and the flash went off. 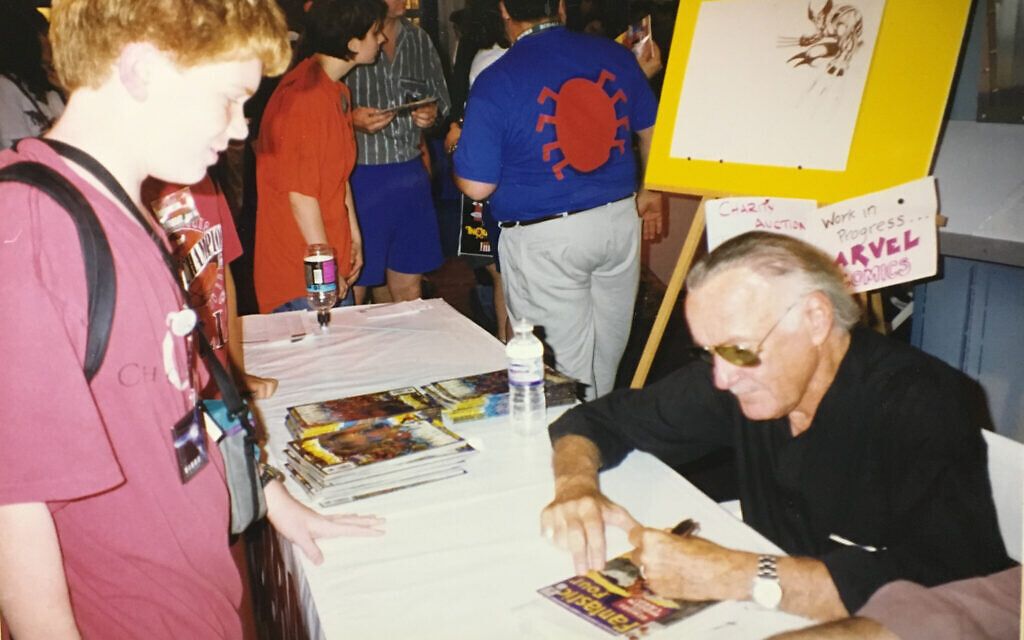 It was a prescient remark, as Riesman, now 35, has written the first posthumous biography of Lee that was begun after his death in November 2018 at the age of 95. Published by Crown, it is available from February 16.

Far from hagiography, the book, titled, “True Believer: The Rise and Fall of Stan Lee,” exposes Lee’s dissembling about who really created the exceedingly popular Marvel superheroes. (Hint: It wasn’t him, at least for the most part.)

In essence, Riesman supports in this biography what many within the comics industry and community have known for decades. Through his extensive research and reporting, the author brings to light the truth about who Lee really was, versus who he presented himself to be. 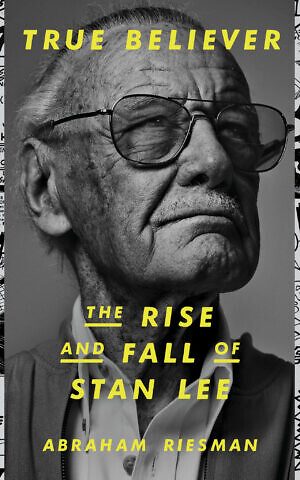 Lee flogged Marvel — which grew from comic books for children to a universe of blockbuster movies and merchandising — to the world. But what Lee was most interested in selling was himself. He wasn’t exactly a villain, but neither was he the hero that he made himself out to be. Ultimately, he paid dearly for this lack of self-knowledge and awareness, living out his final years suffering from abuse and indignities.

Riesman fell in love with the superhero comics genre a year before he met Lee when his best friend encouraged him to read back issues of  X-Men comic books. Riesman’s interest grew, and he developed a minor reputation for writing about comics as a journalist.

While on staff at New York Magazine in 2015, an editor dropped on Riesman’s desk a galley of a graphic adaptation of Lee’s 2002 autobiography, “Excelsior.” (“Excelsior,” like “True Believer,” is a Lee catchphrase.) The editor meant that Riesman should do a short review of the adaptation, but Riesman misunderstood and pursued a more extensive reported essay, baring the “secret” that it was artists like Jack Kirby and Steve Ditko — not Lee — who deserved most of the credit for creating many of Marvel’s most famous superheroes and their associated storylines. 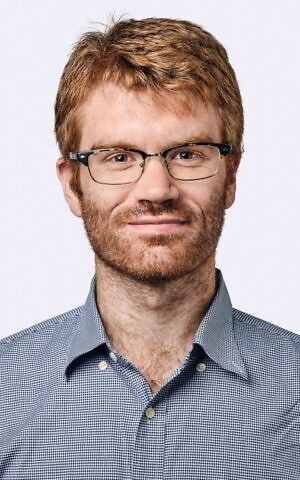 Fortunately, Riesman’s editor supported his reporting and published the article in early 2016. The piece made an impression, and when Lee died nearly three years later, Riesman was tapped by Crown to write Lee’s biography.

“My intent was not to take Stan down but to write honestly. I really don’t think of this as an exposé or a myth buster,” Riesman told The Times of Israel in a video interview from his home in Providence, Rhode Island.

The book is, rather, an attempt to understand Lee’s motivations and the impact of his words and actions. Riesman wanted to know the story that Lee told when he lied, and why he told it. He wanted to know who facilitated these lies, and what the outcomes were.

“True Believer” begins with the story of Lee’s ancestors, who fled Romania because of persecution. Lee’s parents Celia Solomon and Jack Lieber met in New York and married in 1920. Lee was born Stanley Lieber two years later. The family had a second son, Larry (who ended up working at Marvel, but was ignored by Lee). Jack, a garment worker, struggled during the Great Depression and expected his eldest son to be a model student. 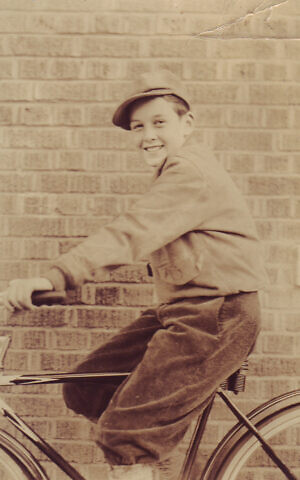 Stan Lee as a teenager on his bike (Courtesy of the Stan Lee Papers, Box #177, American Heritage Center, University of Wyoming)

Teenage Stanley was bright, but not particularly interested in school. Once he owned a bicycle, he freely wandered Manhattan. He enjoyed writing, and supposedly entered and won several newspaper youth writing contests. It seems Lee’s fudging of the facts started then. Riesman was able to track down records of these contests. The contests were real, but Lee’s winning them was not.

Not yet out of his teens, Lee entered the Jewish-dominated comics publishing world when he got a job working for a family member, who owned Timely Comics, Marvel’s predecessor. He was hired as the assistant to editor Joe Simon, who is best known for co-creating Captain American with Kirby. Stanley Lieber invented the byline Stan Lee for his first writing gig, eventually making it his legal name.

When Simon and Kirby left Timely due to a dispute, Lee was made editor at the astonishingly young age of 19. After serving in World War II as a propaganda and manual writer, he returned to Timely as writer and editor.

Lee married Joan Clayton Boocock in 1947 and moved to the suburbs. He became father to a daughter a few years later and tired of the comics business, which at the time was generally considered low-brow children’s fare. Throughout the 1950s (which Lee dubbed his “limbo years”), he tried a variety of writing, publishing and broadcasting ventures in an attempt to distance himself from the day-to-day comic book production grind. Nothing panned out. 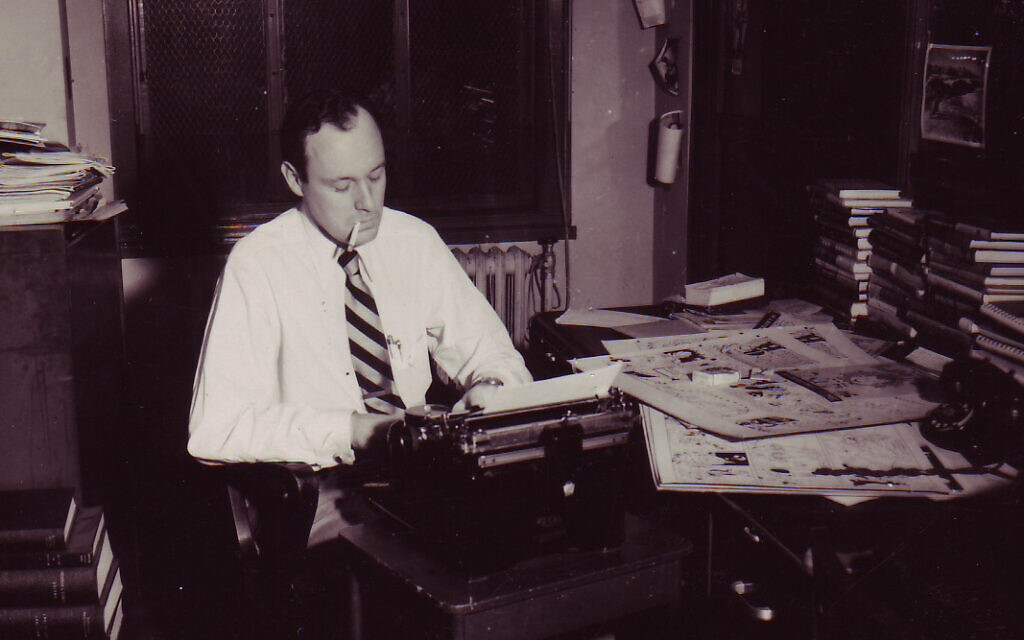 His fortunes shifted in the early 1960s when Marvel hit it big with The Fantastic Four, superheroes who were cast from a different mold. These new characters were fallible, idiosyncratic and angsty.

“Superhero stories were supposed to be about genial people who happily stumble upon superhuman abilities, then go on their merry way toward justice,” Riesman writes in “True Believer.”

These new superheroes had their powers “forced upon them quite painfully,” making them far more relatable to readers.

Other such characters, like The Hulk, Thor, and the exceedingly popular Spider-Man, followed. A Marvel universe was emerging, in which characters unexpectedly showed up in one another’s worlds, and storylines crisscrossed. Readers were enthralled. 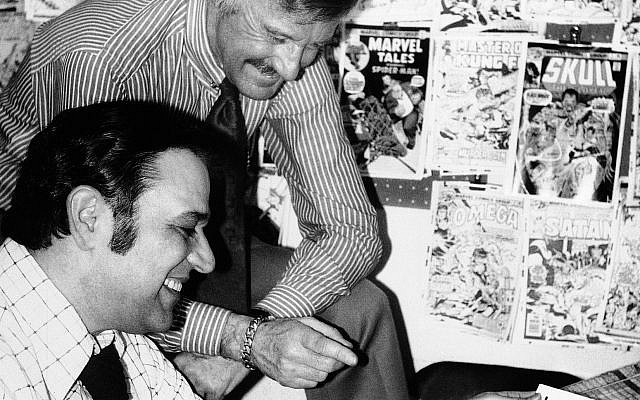 These were all creations of the new “Marvel Method,” whereby writer and artist would conceptualize a character and story in conversation. Then the artist would be left to plot the story and create the visuals. Only at the end would the writer come back and fill in the narrative and dialogue. This was much different from the conventional method by which the writer would present a full-blown script with words and image placement to an artist, who would create illustrations.

Notwithstanding Lee’s snappy way with words (sometimes breaking the fourth wall by addressing readers directly), he really did not deserve the full writing credit for these comic books — but he took it anyway.

“Stan Lee is the only character that Stan Lee independently created,” Riesman remarked. 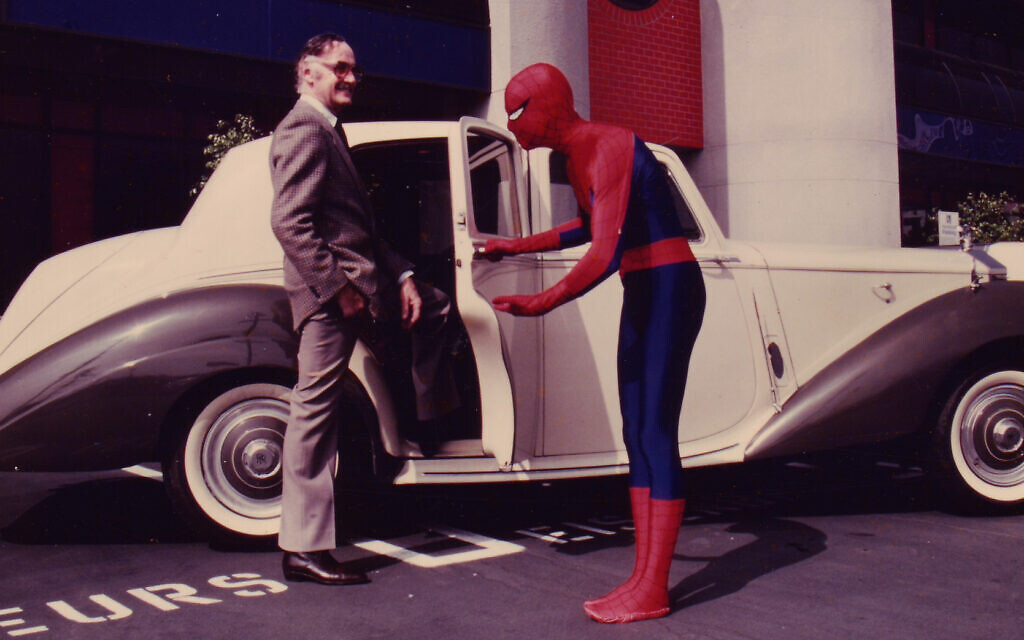 Stan Lee is greeted at his personal Rolls-Royce in the Marvel Productions parking lot by a Marvel employee in a Spider-Man costume, the early 1980s. (Courtesy of the Stan Lee Papers, Box #177, American Heritage Center, University of Wyoming)

To add insult to injury, Lee hired Marvel’s exceptional talent (including Kirby, who returned) on a freelance basis only. Not only did he squelch attempts at their organizing, but he also forbade them from doing work for rival companies.

“I wasn’t trying to pass judgment overall [on Lee], but in the case of Stan’s labor exploitation, I am passing judgment,” Riesman said.

As Marvel’s success grew in the 1970s, Lee became the face of the company. In subsequent decades, through cameo appearances in dozens of Marvel films, Lee’s name and countenance would become permanently associated with the comics universe. It was all about keeping up appearances, as Marvel had declared bankruptcy in the 1990s and terminated Lee’s contract. He managed to be rehired as a figurehead for the company, which was acquired by Disney. 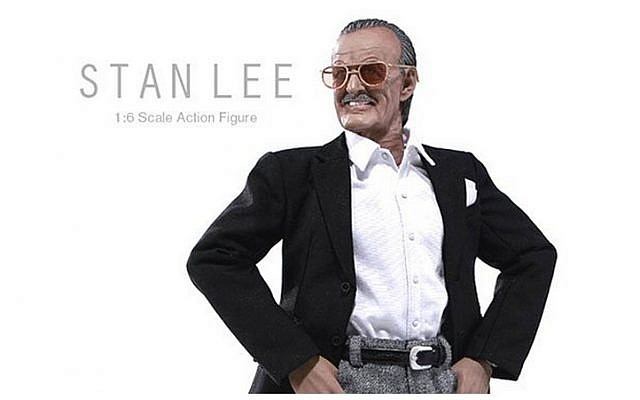 Things essentially went downhill for Lee from the 1980s through to his death in 2018. He and his wife moved to Los Angeles, and just about every attempt Lee made to break into the Hollywood scene failed. He increasingly relied on charging high rates for appearances and autographs to supply needed cashflow.

The latter part of “True Believer” is about the various business ventures Lee got himself involved in, many of which were dubious, if not outright criminal. Desperate to make the huge sums needed to sustain the lifestyles of his shopaholic wife and permanently dependent daughter, Lee associated with unscrupulous individuals. It’s unclear to what extent he was aware of the various underhanded dealings done in his name.

In speaking with The Times of Israel, Riesman said it was unfortunate that Lee had not been more entrenched in the Jewish community, as that could have helped mitigate the tumultuousness of his last years. However, it would have been unlikely for Lee to seek support from Jewish institutions. For his entire life, he made it a point of distancing himself from the religious way of life espoused by his father. 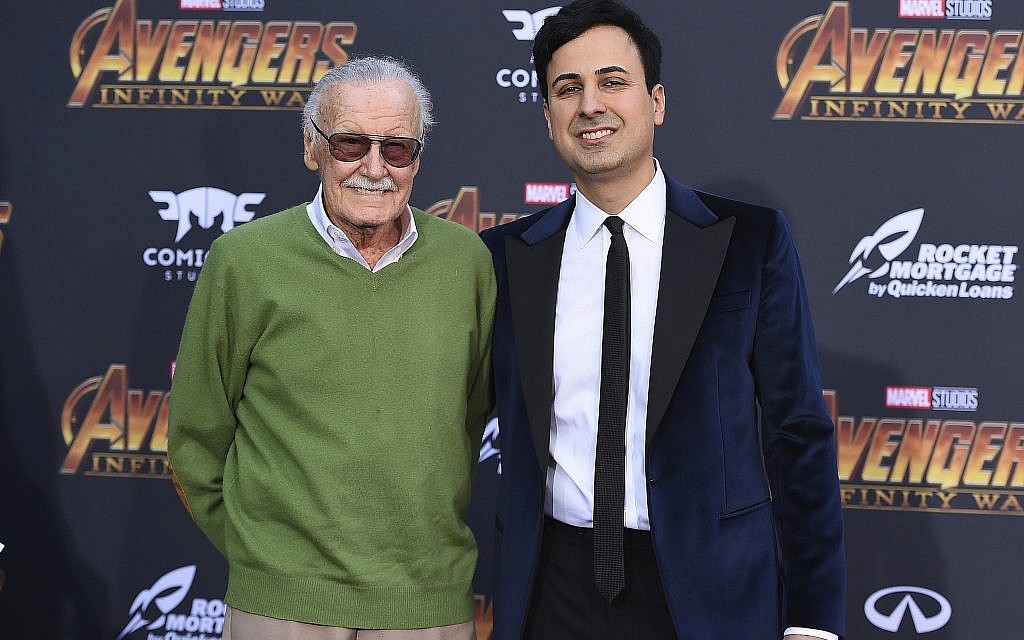 In this April 23, 2018, file photo, Stan Lee, left, and business manager Keya Morgan arrive at the world premiere of ‘Avengers: Infinity War’ in Los Angeles. Morgan was arrested on elder abuse charge in May 2019. (Photo by Jordan Strauss/Invision/AP, File)

“I was really intrigued by a quote I noticed in Stan’s autobiography. He was speaking of his and his wife’s inability, as an interfaith couple, to adopt a child [in the 1950s, after their second daughter died shortly after birth],” Riesman said.

“He said it was because ‘my wife was Episcopalian, and my parents were Jewish.’ It struck me that he himself didn’t identify as Jewish.”

Riesman said he was troubled by the fact that Marvel did not intervene when Lee was in his 90s and in failing physical and mental health. It was clear that those around him were mistreating and taking advantage of him. In fact, Lee’s business manager Keya Morgan was arrested on a charge of elder abuse in May 2019, half a year after Lee’s death.

“It is unconscionable,” Riesman said.

“Stan did a lot of unsavory things, but no one deserves what happened to him in the end,” he said.