Already dealing with the coronavirus pandemic, it appeared Tuesday that Israel had also been smitten with another biblical plague when the water in one of the streams that feeds central Israel’s much-loved Alexander River began running blood red — literally.

The cause was not the first plague familiar from the Passover Haggadah, but blood, feathers, and other body parts of slaughtered fowl flowing freely into the Yad Hanna Stream– one of several tributaries — from one or more Palestinian slaughterhouses in the northern West Bank city of Tulkarem.

On Tuesday, the Society for the Protection of Nature in Israel posted a videoclip of the bloody water and called on Environmental Protection Minister Ze’ev Elkin to deal with the issue. 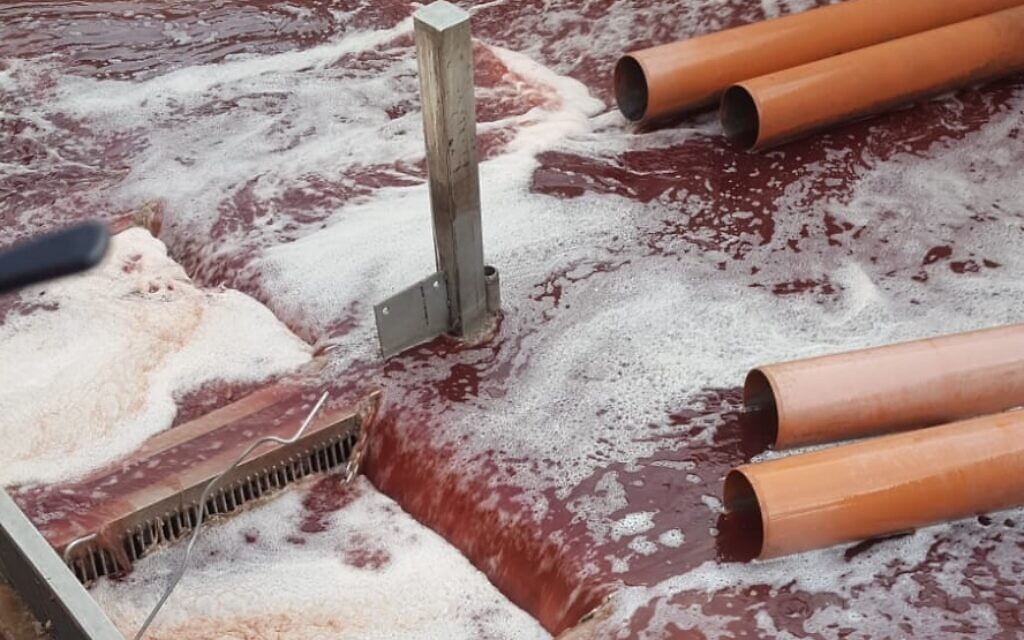 But this is far from a one-off event and highlights the difficulties of maintaining cross-boundary pollution control, especially when so many different bodies are involved and responsibility seems to fall between the cracks.

At this time of year, the slaughterhouses in Tulkarem are working overtime to supply chicken meat to Israelis marking Passover, which ends on April 15, and to Muslims, who are set to start the month-long Ramadan festival on April 23.

The blood and other leftovers of the slaughtered fowl reach the nearest stream on the Palestinian side, after which the polluted water flows westwards, crossing the Green Line and ending up at the Yad Hanna Wastewater Treatment Plant on the Israeli side, where the detritus blocks the netting on the sluice gates. 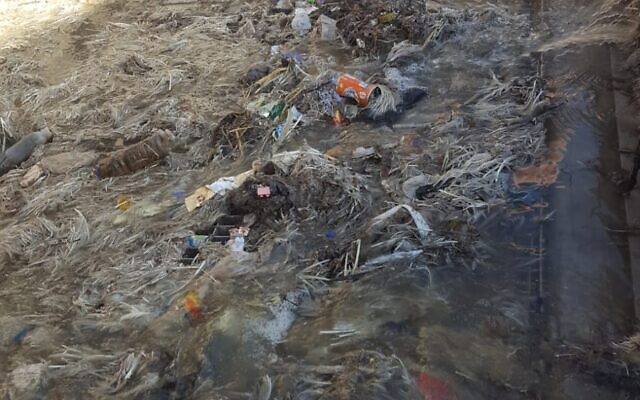 Alon Heyman, director general of the Emek Hefer Economic Development Corporation, which operates the Yad Hanna plant on behalf of of the Emek Hefer Regional Council, explained that when the netting gets blocked, polluted water simply flows over it, and continues onto the Alexander River, which eventually drains into the Mediterranean Sea at Beit Yannai, north of Netanya.

“We have a sensor to tell us if the water has risen over the gates but by then it’s already too late. We try to remove whatever we can as fast as we can,” he said.

As it is not certain that the detritus comes only from the Palestinian slaughterhouse clearly visible from the Israeli side of the West Bank security barrier, it is difficult to pin the source of the problem down.

Furthermore, with so many bodies involved — the Israeli Environmental Protection Ministry, the Israel Water Authority, the Civil Administration, the Coordination of Government Activities in the Territories (COGAT) and the Palestinian Authority, to name just five — it is easy for one to pass the buck to another.

The Yad Hanna treatment plant was created 20 years ago, as a temporary, five-year stop gap, to treat wastewater from the western part of the West Bank city of Nablus and various nearby communities.

Around seven years ago, German government-funded construction began on a modern wastewater treatment facility in Nablus.

This is supposed to treat both domestic sewage and industrial waste, the latter including fine stone dust from stonecutting businesses, salt from the manufacturers of sesame oil paste (tehina), fats from dairy farms, slaughterhouse waste, oils from olive pressing mills, chemicals from jeans factories and more. 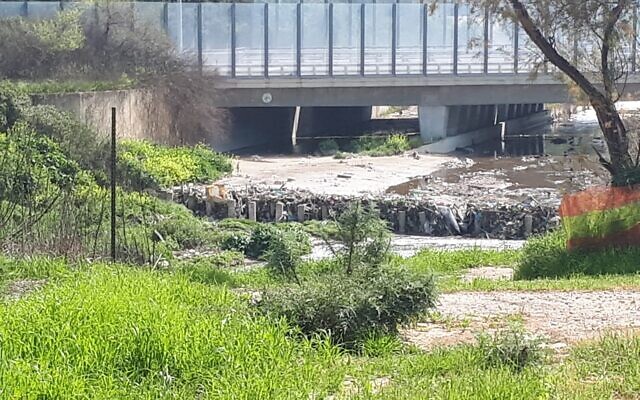 Refuse carried into Israel from the West Bank by the Nablus Stream at the end of winter. (Courtesy Dr. Ran Farhi)

Treated water from the plant flows downhill toward Tulkarem and then crosses the Green Line, arriving at Yad Hanna.

The problem, according to Heyman, is that rather than undertake the costly process of removing slurry of different kinds for transfer and burial elsewhere, workers at the Nablus treatment facility simply open the sluice gates and let it all flow down the Nablus Stream, passing the problems onto Yad Hanna.

Blood gets diluted as it flows into the Alexander River. Other solids and materials such as oil are much harder to remove. 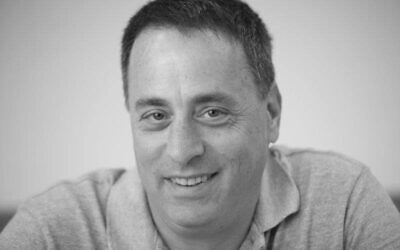 Yad Hanna was built to deal with 6,000 cubic meters of effluent a day from the western Nablus area. Today the plant, which Heyman describes as “primitive,” receives a daily 20,000 cubic meters.

Talk about replacing this old facility with a modern one has gone on for years to the extent that, frustrated by the lack of meaningful progress, the Emek Hefer Regional Council took the state to the High Court in 2017. It subsequently withdrew its petition after the government guaranteed the funds to build a new plant. Design work started, but then ground to a halt.

“It’s only when we scream that anyone does anything,” said Dr. Ran Farhi, Professional Coordinator at the Sharon Drainage and Rivers Authority, an independent statutory corporation. “Nobody’s coordinating things from our side.” 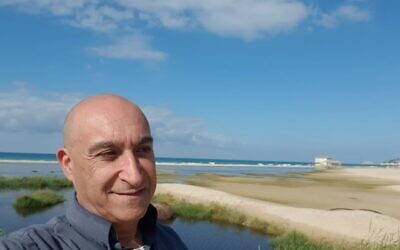 Farhi said that the problems with water pollution were “24/7,” but that every season had its own characteristics.

“The oil harvest lasts from September to November. During this period, all the olive mill wastewater goes into the stream either because the Palestinian treatment facility doesn’t remove it and lets it flow onto the Yad Hanna plant, which has no way to treat it, or because not all the olive presses are connected to the treatment facility in Nablus. It’s very toxic and deprives the water of oxygen. 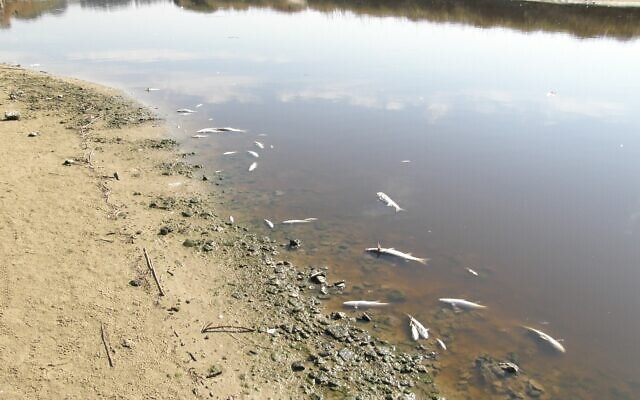 “The slurry enters the Alexander River, where it poisons fish and other wildlife. Every year, pictures appear and residents of Emek Hefer cry out, asking where the responsible people are and why this has to keep happening.

“Then you have Passover, Easter and Ramadan, when the slaughterhouses are at the peak of producing chicken meat, followed by the [Muslim] Feast of the Sarifice [in July] when families slaughter goats, sheep and cattle at home or on the streets. Where there’s no proper sewage system, the blood just goes into the stream.” 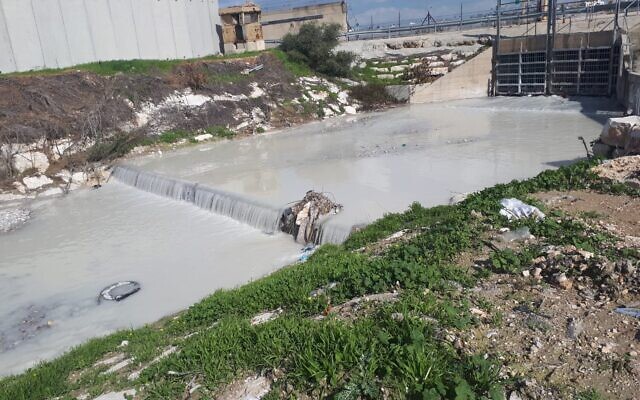 The Nablus Stream, a tributary of the Alexander River, entering the Israeli side of the security barrier with the West Bank. The color comes from stonedust mixed with other toxins. (Courtesy, Dr. Ron Farhi)

“The stonecutters use water to cool the saws, so then the stonedust enters the stream and combines with other refuse to create a toxic slurry that looks like tehini,” Farhi went on. “When the flow is gentle, Yad Hanna’s centrifuges can deal with it, but when it’s stronger, when there’s torrential rain and flooding, it goes over the dam and into the river. That’s before mentioning other refuse — from animal corpses to bits of cars — that end up in valleys on the Palestinian side and eventually fall into the streams.”

The Sharon Drainage and Rivers Authority then has to fight the unit in charge of wastewater treatment within the Water Authority for funds to dredge the streams of industrial sludge before they reach the river, Farhi charged. 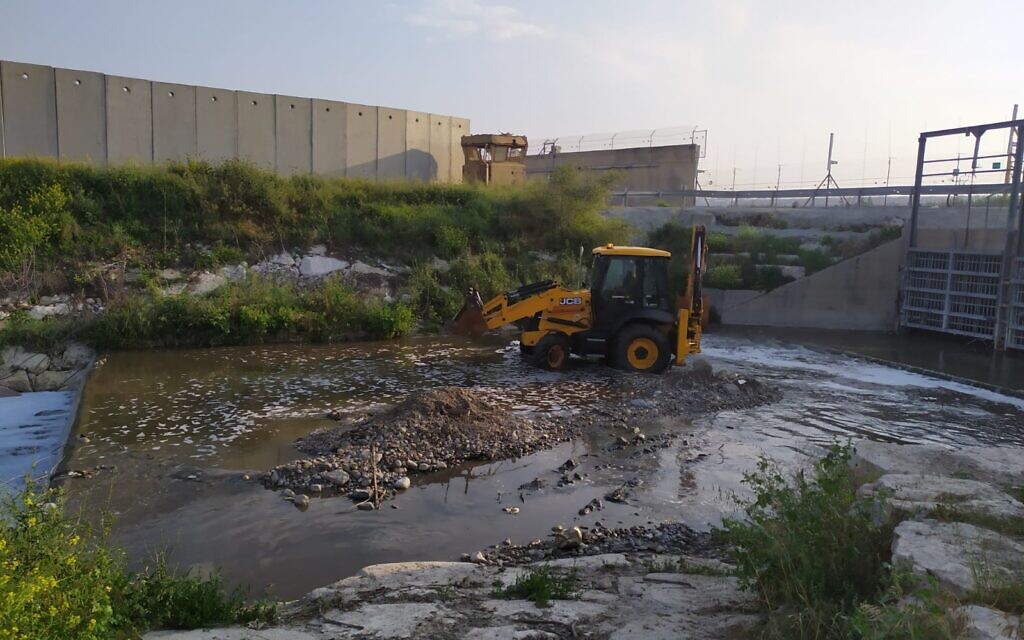 Dredging slurry from the Nablus Stream before it flows into the Alexander River. (Courtesy, Alon Heyman)

“We have to remove the slurry every summer, before the winter rains,” Farhi said. Asked what would happen if it wasn’t removed, he said it could block the streams. “Just come and smell it,” he added.

“Each one says the other one is responsible, and the residents of Emek Hefer suffer,” Farhi continued. “For 25 years and with more than NIS 100 million (just under $28 million) invested by us, the regional council and other partners, we’ve been trying to clean up the Alexander River, but this problem stops us from succeeding.” 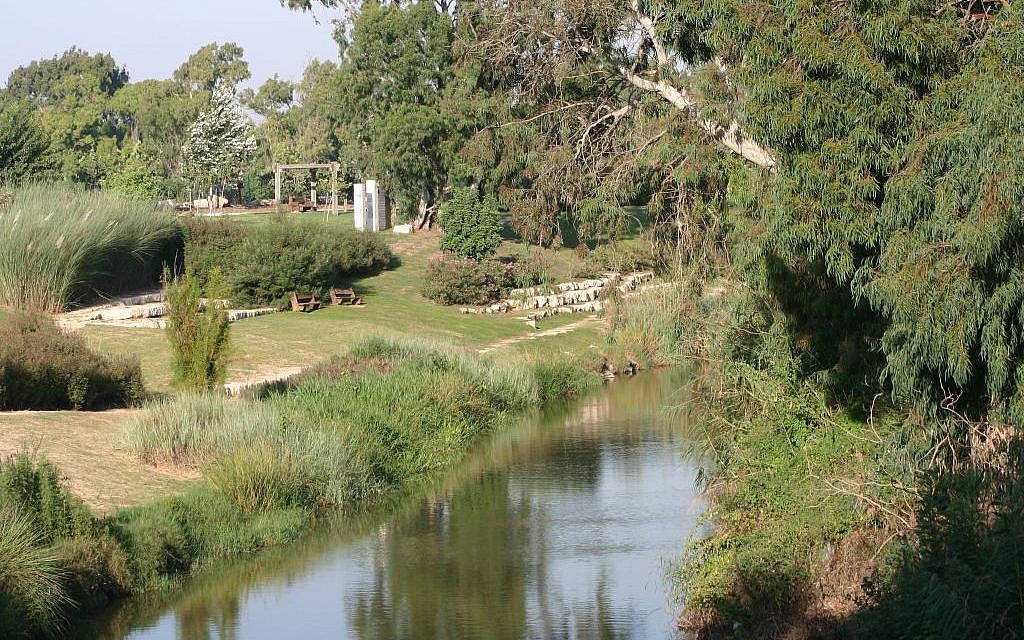 A section of the Alexander River. (Shmuel Bar-Am)

According to the Environmental Protection Ministry’s website, the establishment and operation of wastewater treatment plants is the responsibility of local council and water and sewage corporations, while supervision, inspection and enforcement are the ministry’s responsibility.

The Alexander stream is home to soft-shell turtles, swamp cats, nutrias and various species of waterfowl, and forms part of a national park that is popular with visitors.

The park is currently closed to the public because of the coronavirus.