Unlike Israel’s two previous peace deals, the agreement announced Thursday with the United Arab Emirates does not remove from the regional equation a direct neighbor with a history of involvement in wars intended to achieve our destruction. It does not feature a large, populous or especially militarily potent adversary.

But its significance is profound nonetheless, and it was legitimate for Prime Minister Benjamin Netanyahu, detailing the agreement to Israelis on Thursday night, to add himself, at least in pencil, to the short list of Israeli prime ministers who have widened Israel’s circle of peace: Begin (1979, Egypt), Rabin (1994, Jordan), Netanyahu (2020, the United Arab Emirates).

Characteristically, the prime minister is trying to dance at two weddings. He is hailing the deal he reached with Crown Prince Mohammed bin Zayed for the full normalization of relations while simultaneously insisting that the quid pro quo — that “Israel will suspend declaring sovereignty over areas outlined in the President’s Vision for Peace,” as specified in Thursday’s joint US, Israel, UAE statement — has no long-term significance. Extending sovereignty to the 30 percent of the West Bank allocated to Israel under the Trump administration’s January peace plan “remains on the table,” Netanyahu said. President Donald Trump had merely requested a “temporary halt” to the move as part of the UAE deal, he added. “There is no change in my plan… I’m the one who put it on the table… I did not take sovereignty off the table,” he repeated, with the aggrieved insistence of one who doth protest too much, methinks. 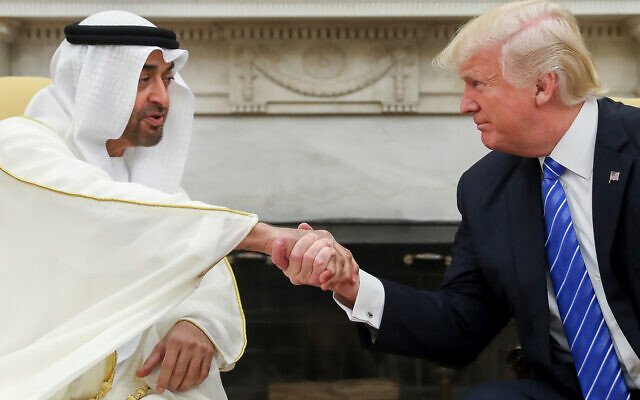 The American president himself rather punctured the contention, telling his own press briefing, when asked about Netanyahu’s unilateral annexation plan, that “Israel has agreed not to do that. More than just off the table, they’ve agreed not to do it, and I think that was very important and I think it was a great concession by Israel…” This, before he and Ambassador to Israel David Friedman returned to the specific formulation of the deal and stressed that the word “suspend” was the order of the day. “I can’t talk about some time in the future,” Trump wound up saying.

And, indeed, who can?

But the bottom line is that annexation is off, and normalization is on.

Netanyahu is naturally trying to mitigate the damage this simple equation does to his pro-settlement base. Yet the fact is that the prime minister had a choice — applying sovereignty to parts of Biblical Judea and Samaria at the price of alienating Israel’s allies and empowering its enemies; or jettisoning that unilateral gambit and working with the US administration to bolster regional acceptance of the Jewish state.

He chose the latter. And he should be commended for it.

Not the ‘deal of the century’

The Israel-UAE deal is not the “deal of the century.” It’s not even entirely clear that it’s a deal at all at this stage. The joint statement declares that the US president, the Israeli prime minister and the UAE crown prince “agreed to the full normalization of relations between Israel and the United Arab Emirates.” But a formal signing ceremony, Trump said, will need to be held, likely in about three weeks.

Assuming that process is properly completed, speculation is rife that other states in the region will follow suit; Bahrain, Oman, Sudan and Morocco have all been mentioned. Jared Kushner, Trump’s key adviser and son-in-law, said Friday that formal ties with Saudi Arabia, a glittering prize, were now inevitable. “I do think that it’s an inevitability that Saudi Arabia and Israel will have fully normalized relations, and they’ll be able to do a lot of great things together,” he predicted. Presumably, he would know. 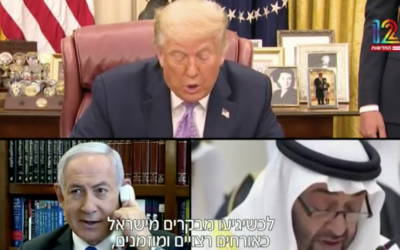 Even a dizzying rush to ally with Israel by all these countries, however, would still not constitute the “peace in the Middle East” that Trump on Thursday said was now on its way. The vision that the president unveiled at the White House in January was focused on the Israeli-Palestinian conflict. And the Palestinians — Mahmoud Abbas’s West Bank-based Palestinian Authority, and the Gaza-ruling Hamas terror group, alike — have swiftly denounced the UAE’s acceptance of Israel as despicable and a betrayal.

Evidently quite unperturbed by the fact that the PA has had no dealings with his administration since he recognized Jerusalem as Israel’s capital and moved the US embassy, Trump asserted nonetheless that the Palestinians “very much want to be a part of what we’re doing. And I see, ultimately… peace between Israel and the Palestinians. I see that happening. I think as these very big, powerful, wealthy countries come in, I think the Palestinians will follow, quite naturally.”

Abbas is doing everything to suggest that such confidence and optimism is misplaced. Lining himself up with Iran and Turkey, he is showing every determination to resist the UAE’s urgings to utilize the demise of annexation and engage in talks. 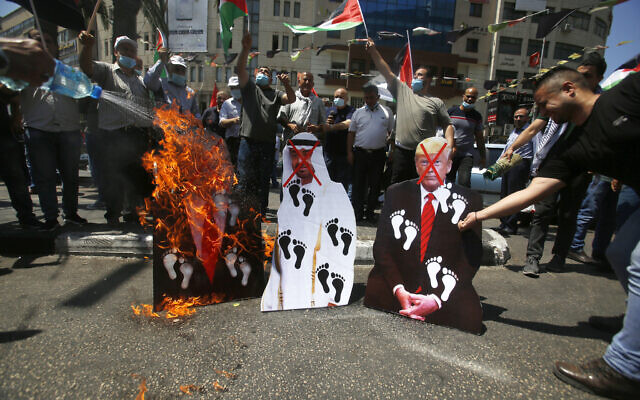 At a briefing of his own in the heady hours of Thursday, Kushner specified that Netanyahu’s acceptance of “a two-state solution with the Palestinians” and of the US vision’s conceptual map on the allocation of territory had been central to persuading the UAE and other potential peace partners “that Israel was serious about really moving forward and making peace.”

By contrast, he said, regional players had been dismayed by the Palestinians’ blunt rejection of the US plan.

In the aftermath of the plan’s unveiling in January, the Trump administration stressed repeatedly that its provisions were not set in stone, and urged the Palestinians to engage with it. They opted not to do so. Netanyahu’s choice — the shelving of annexation, and the advancement of normalization — keeps that option open. Again, they are rejecting it.

What happens next will not be dull. The UAE breakthrough may yield other agreements in the region. It is already plunging Netanyahu into a domestic political fight with his own camp. In the face of that ongoing Palestinian rejection, it is unlikely to bring about the “deal of the century” anytime soon, and could prompt Palestinian instability and violence.

But Netanyahu has evidently made his strategic decision. Even on Thursday, again wary of the dismay within his base, Netanyahu refused to specifically endorse a two-state solution. “You can define it as a Palestinian state,” he said. “I don’t define it.” But he was also careful not to rule it out. “What matters is the essence,” he said.

This divisive prime minister, who routinely delegitimizes Israel’s Arabs, who endorsed the Kahanists of Otzma Yehudit, who batters away at our democracy by alleging that the media, the cops and the state’s prosecutors are framing him for corruption as part of an attempted political coup… this same prime minister acted firmly in the core interests of the state by forging ahead with what he calls a true “peace for peace” deal with the UAE, but one that was also a normalization-for-no-annexation compromise.

“After years of efforts and dreams and action,” he said Thursday, “the great privilege fell to me to establish the third peace agreement between Israel and an Arab state — the United Arab Emirates… I always believed it was possible,” he said, and “there will be other Arab and Muslim states who will join the circle of peace with us.”

Netanyahu was not changing his political spots, nor overhauling his diplomatic strategy. While he cited Begin and Rabin, he asserted that this deal, his deal, marked the opening of a new path — “peace for peace,” as opposed, presumably, to the land for peace equations of the Egypt deal or Rabin’s failed efforts with the Palestinians. “Peace based on fruitful economic cooperation and real mutual respect,” he elaborated.

But Netanyahu had compromised nonetheless. Wisely so.