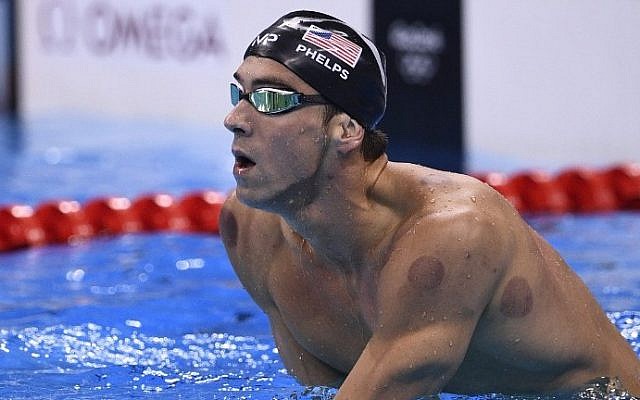 USA's Michael Phelps, showing circular marks from cupping treatment on his skin, as he looks at the results board in the Olympics swimming pool, Rio de Janeiro, August 9, 2016. (AFP/Martin Bureau)

JTA — Like a lot of second generation Ashkenazi parents, mine used Yiddish as a secret language when they didn’t want the “kinder” to know what they were talking about.

That’s why I managed to learn exactly one Yiddish phrase from my father: Es vet helfn vi a toytn bankes — that is, “It will help like cupping a corpse.”

Obscure? Sure. But all you need to know is that “bankes” (rhymes with “swan kiss”) is a folk remedy involving little glass cups that are heated and then applied to the skin, forming a vacuum that healers believed would suck out bad spirits, malevolent “humours” and whatever else was making you sick in the pre-antibiotics era.

Essentially, the Yiddish phrase is an expression of futility: “Whatever you think you are doing to help will work like giving medicine to a dead body.”

Get The Times of Israel's Daily Edition by email and never miss our top stories
By signing up, you agree to the terms
View this post on Instagram

So imagine my surprise when I learned that the hottest new therapy and pre-event routine for Olympic athletes is — bankes! Those purple circles covering the shoulders and backs of swimmer Michael Phelps and other athletes? Those are bruises from cupping therapy, in which trainers apply the heated glass cups to loosen and stimulate muscles. “I’ve done it before meets, pretty much every meet I go to,” Phelps told The New York Times on Monday. (That’s him getting the treatment above.) “So I asked for a little cupping yesterday because I was sore and the trainer hit me pretty hard and left a couple of bruises.”

According to one study of the cupping technique, in which 30 gymnasts were randomized into two groups, athletes in the treatment group more quickly recovered their creatine kinase levels (which is good), experienced milder fatigue and even enjoyed “better interpersonal relations.”

An Israeli academic who has reviewed the cupping research suggests the treatment works by stimulating the immune system by producing helpful proteins.

He also didn’t rule out the placebo effect.

“A placebo effect is present in all treatments, and I am sure that it is substantial in the case of cupping as well,” Leonid Kalichman, a senior lecturer at Ben-Gurion University of the Negev, told the Times. “A patient can feel the treatment and has marks after it, and this can contribute to a placebo effect.”

In other words, if it you think it’s working, that may be enough.

Or in other other words, bankes ain’t bupkis.