One of the most touching video clips to appear on Facebook recently came from Scotland and a lady who formed a relationship — albeit a brief one – with a bee that had lost its wings.

“I put my hand down, and she more or less crawled onto it right away,” says the woman. “I was working in the garden, and I turned around and said to myself, ‘There’s a bee.’ And it wasn’t until I picked her up and I kinda looked at her and I thought, ‘You haven’t any wings! And it was at that point that I thought, ‘How are you going to manage?'”

That little bee was treated to sugary water, a warm hand and lots of love and empathy before it died.

Without its wings, its life would likely have been even shorter in nature.

Posted by Ray and Joy by Firefly Entertainment on Sunday, May 20, 2018

In all probability, it had deformed wing virus, one of at least seven viruses affecting honeybees and helping to cause colony collapse all over the world. 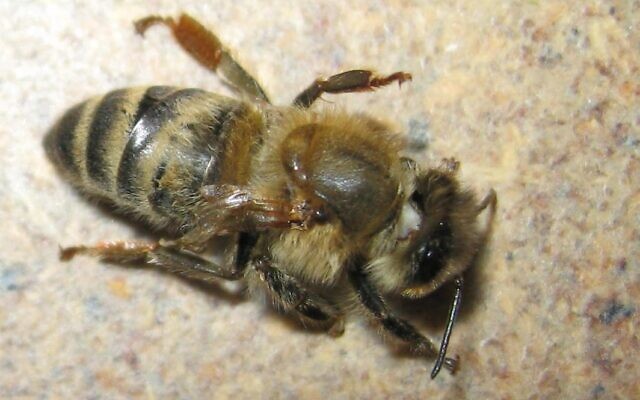 It is to draw attention to the woes — and critical importance — of bees and other pollinators that nature lovers worldwide are marking the third annual international World Bee Day on Wednesday.

The idea came from Slovenia, where beekeeping is a popular tradition. May 20 was the birthday of Anton Jansa, an 18th century Slovenian pioneer of modern apiculture.

Organizations, both in Israel and around the world, will be going online to call for better preservation of natural habitats, and will hope to excite the public into appreciating just how important — and extraordinary — bees really are.

“Nearly 90% of the world’s wild flowering plant species depend, entirely, or at least in part, on animal pollination, along with more than 75% of the world’s food crops and 35% of global agricultural land. Not only do pollinators contribute directly to food security, but they are key to conserving biodiversity,” says the United Nations.

Bees have gotten a bad press — the truth is that they rarely sting.

What they do do is sustainably pollinate a third of the plants needed for a stable, healthy, human diet. There is no alternative to bees and no logic to seeking an alternative. 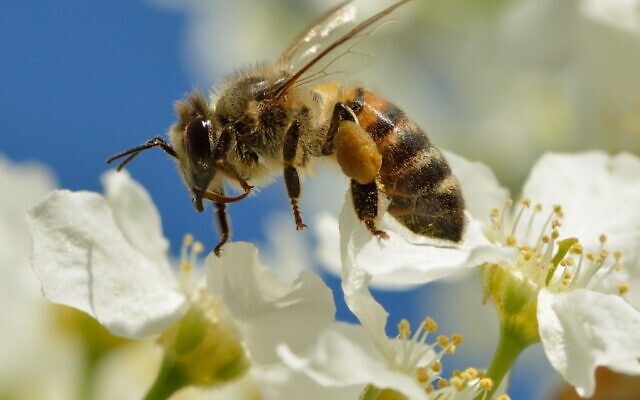 A honeybee on a hackberry tree. The light brown pollen sack can be seen on the back leg. (Ivar Leidus, CC BY-SA 4.0, Wikipedia.)

Bees are thought to have co-evolved with flowering plants, which followed other plant forms such as cone-bearing plants (think pine trees).

In many cases, the length of a bee species’s tongue (proboscis) evolved along with specific species of plants where nectar could be found at a specific depth within the flower. 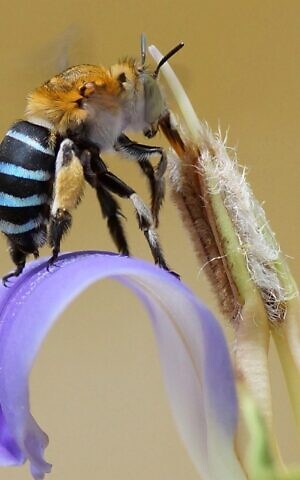 Other creatures, among them flies, wasps, moths, beetles, birds and bats also pollinate flowers, but unlike honey bees, they collect pollen just to feed themselves. Honey bees, most of which are reared these days, collect pollen to feed the hive, storing it in little sacks on their hind legs until they get home. Pollen that collects on their furry bodies serves to pollinate flowers, as they fly from one plant to the next.

Worker bees out searching for pollen are able to make remarkable assessments — which flowers are the best, how far they are from the hive, how much nectar they have (including which sugars,) how easy the nectar is to access, and more. Once they have made their calculations, they return to the hive, present a kind of rating to their comrades and tell them how far to fly and how many degrees away from the sun.

With five eyes, and an ability to see UV light (enabling them to see lines that guide them towards nectar), they have good eyesight. But in the darkness of the nest (in the wild) or the hive, they communicate via vibration, and smell — they are thought to have more than 170 smell receptors. 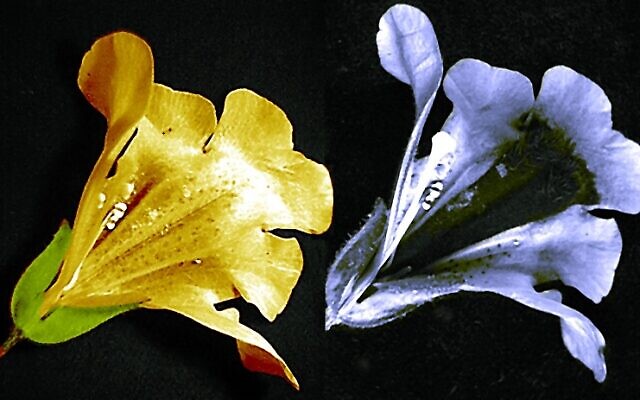 Images of a Mimulus flower in visible light (left) and ultraviolet light (right) showing a dark ‘nectar guide’ that is visible to bees but not to humans. (Plantsurfer/ CC BY-SA 3.0/Wikipedia)

In bee society, where decisions are reached via consensus (for more, amazing information, read Honeybee Democracy by Thomas D. Seeley), it is the females — the infertile worker bees — that do all the work, looking after the youngsters, foraging for food and searching out the best locations for a new home when the colony needs to move.

The males, known as drones, do very little — hanging around, being fed by the workers, getting fat and hoping to mate with another colony’s virgin queen. 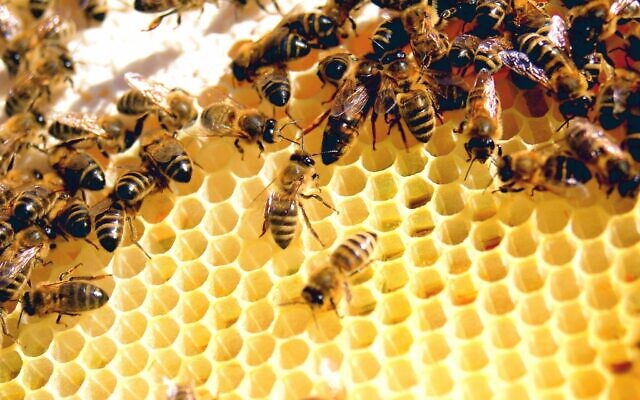 But habitat loss, pesticides and disease are leading insect populations in general, and bees in particular, to decline all over the world.

In April last year, an article in Biological Conservation, picked up by the international press under a variety of headlines using the word “Apocalypse,” laid bare the state of insect biodiversity in the world, “as almost half of the species are rapidly declining and a third are being threatened with extinction.”

The extinction rate is eight times faster than that of mammals, birds and reptiles, the study said, but as the most varied and numerous of creatures on the planet, insects are essential for the proper functioning of all ecosystems. 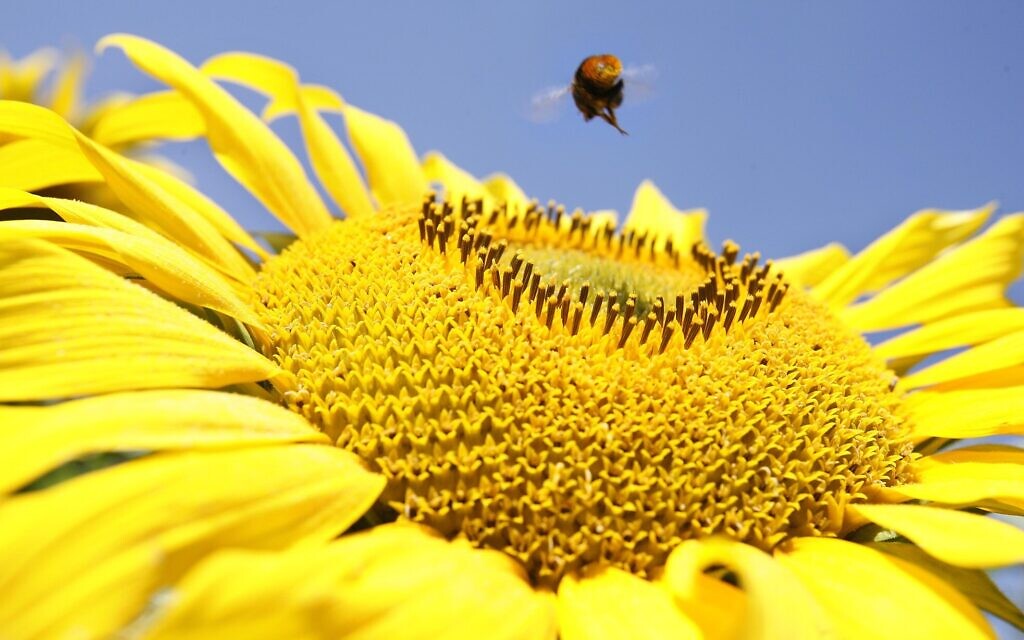 A bumble-bee hovers over a sunflower near Gera, Germany. (AP Photo/Jens Meyer)

The main drivers of extinction (most of them human-induced) in order of importance, the article said, are habitat loss and conversion to intensive agriculture and urbanization; pollution, mainly via synthetic pesticides; biological factors, such as pathogens and introduced species; and climate change.

“Unless we change our ways of producing food, insects as a whole will go down the path of extinction in a few decades,”  the article said. “The repercussions this will have for the planet’s ecosystems are catastrophic to say the least.”

Francisco Sánchez-Bayo, of the  University of Sydney, Australia, who co-authored the review with Kris Wyckhuys of the China Academy of Agricultural Sciences in Beijing, told the Guardian newspaper that a 2.5% rate of annual loss over the last 25-30 years was “shocking” and “very rapid. In 10 years you will have a quarter less, in 50 years only half left and in 100 years you will have none.”

Bees and the Varroa destructor

Bees are among those that are badly affected, with much of the blame for declines in honeybee populations falling on viruses carried by a mite aptly named Varroa destructor. 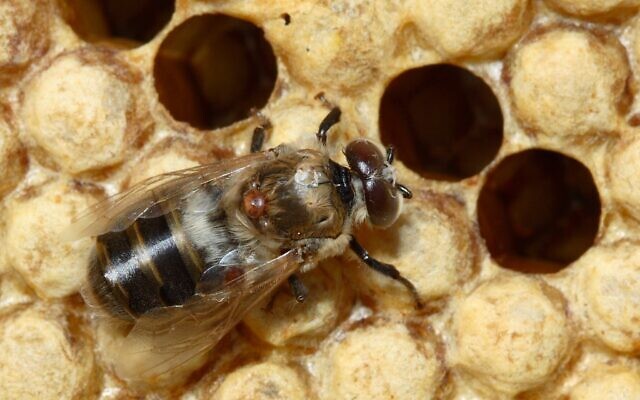 Varroa destructor on a bee in a hive. (Waugsberg/CC-BY-SA-3.0/Wikipedia)

This mite carries at least seven viruses, among them the deformed wing virus and Israeli acute paralysis virus. The latter, as it sounds, paralyzes and kills honey bees, possibly confusing its sense of orientation before it collapses. It is so-named not because it is native to the Holy Land, which it is not, but because it was first described here by the late Hebrew University entomologist Prof Ilan Sela in 2004.

In the US, beekeepers lost an estimated 40.7% of their managed honey bee colonies between April 2018 and April 2019, according to the most recent loss and management report issued by the Bee Informed Partnership

The Varroa mite, (and possibly also the honeybee) originated in Asia where it was the bane of the Asian honeybee, Apis cerana. It came to Europe in the 1960s, to Israel in 1984 and to the US in 1987 where it has since wreaked havoc on the European honey bee (Apis mellifera).

Adult mites suck on the fat body of both adult bees and bee larvae, injecting viruses into the bees’ body fluids.

They are key drivers of Colony Collapse Disorder in which the female worker bees weaken and disappear, leaving the Queen bee on her own.

In the US (to which European honeybees were imported for breeding), beekeepers lost an estimated 40.7% of their managed honey bee colonies in the year from April 1, 2018-April 1, 2019, according the most recent loss and management report issued by the Bee Informed Partnership. 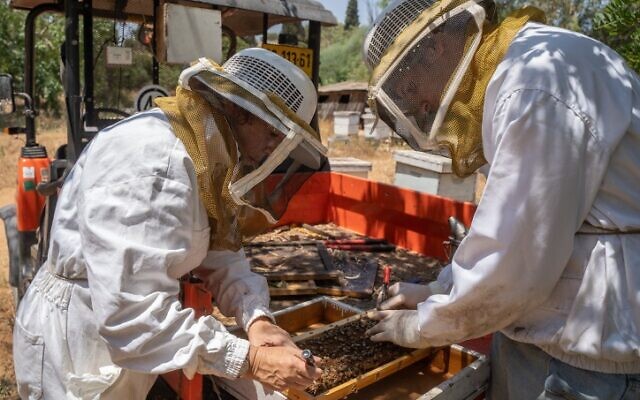 In Israel the situation is better, according to Dr Victoria Soroker, a senior researcher at the Department of Entomology, Nematology and Chemistry at Israel’s Agricultural Research Organization (ARO) in Bet Dagan, with honeybee losses ranging from five to ten percent in well managed hives, and not exceeding 20% in less well managed ones.

US beekeepers tend to spread their hives over larger distances and so are less able than their Israeli counterparts to visit each hive frequently and take preventive action if they see something amiss, she says.

When colony collapse was first reported in 2006, suspicion fell on factors such as cellular phones and genetically-modified foods, both of which have since been discounted. Today, loss of foraging space due to urbanization, pesticides and disease are recognized as the key causes, with most scientists — according to Dr Sorokor — agreeing that Varroa destructor and the viruses it carries are the most harmful.

In Europe, the losses occur during winter when Varroa destructor needs fat and takes it from the bees’ food reserves. That will change (and worsen) as the climate warms and honeybees in Europe, like in Israel, reproduce and function year round. In Israel, the situation is compounded in summer when the wildflowers have long gone and the bees go into the fields to drink water or suck nectar, which has been poisoned with pesticides. 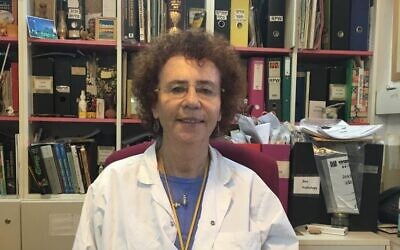 Dr Soroker and colleagues are focussing on two areas of research to protect honeybees.

“Firstly, we’re studying the interaction between the mites and the bees with the aim of disrupting that interaction,” she explained. “We know, for example, that the Varroa mite doesn’t have eyes and that most communication is chemical. So, we are trying to disrupt the communication to stop the mite identifying the right host and prevent her from feeding and reproducing.”

The second leg of the research is to try to exploit bees ability to detect and eliminate Varroa from the colony. “We know from the literature that bees have a characteristic called hygienic behavior. Worker bees inspect the brood (eggs, larvae, and pupae), and even if they’re capped with wax (part of the natural process during development), they can detect, open the cap, kick the Varroa out and even remove the sick brood – and that’s how they clean.”

By isolating hygienic bees and artificially inseminating the Queens, the team is trying to create more resilient bee communities.

What can you do?

According to the United Nations site on International Bee Day, we can all help bees by planting diverse plants, which flower at different times of the year, buying produce from sustainable farms, and avoiding the use of pesticides, fungicides and herbicides in our gardens.