I have no time. I limp across Agrippas Street, right foot landing lower than the left, high heel in hand, looking for the last lonely cobbler in Jerusalem’s Mahane Yehuda market, to whom I had been directed by the leering cucumber hawker I left The General with. A cab, horn blaring, tries to swerve around me just as I get to the other side, nearly colliding with a groaning bus wending its way in the opposite direction down the sluggish street. Shiloh, that’s the name of the alley where the cobbler plies his obsolescent trade.

I pass it without even noticing, doubling back when I realize I must have gone too far. The iron door, dented and streaked with rust, is slightly ajar. Above it is a small wooden sign that looks as if it had been painted in the Middle Ages and never touched since: sandlar, it says simply, in barely red Hebrew script. I look at the time on my phone. The General hasn’t called yet. He is either being celebrated by the vegetable merchants as a military hero or being lynched because he is running against their beloved Prime Minister.

I push the door open and, nearly tripping on the step up, enter a cramped, dark hole in the wall. It takes a minute for my eyes to adjust. To my left is a narrow counter, with barely enough space behind it for a man to stand, or perhaps not enough, as no man stands there. Above it stretches a rack from which hang tools and objects I have no name for. Two green eyes watch me from a shadowy back alcove, soon incarnating into the outline of a large black cat lounging on a shelf, front and back paws extended.

In front of that backdrop, by a low ledge extending from the counter, sits a man with a lined face and grizzly beard, topped by a woolen hat with a pompom on top. The ledge before him holds a plate with sliced cucumber, tomato, and onion, another smeared with a generous portion of hummus and olive oil, and another with wedges of hard-boiled egg. He, like the cat, gazes at me, and unlike the cat, slowly tears a chunk from the top pita in the pile before him, scoops up hummus, and pops the whole thing into his mouth.

“Our campaign is a positive one,” I say. “The General is for putting Israel first. Security, without apologies. Unity. Honesty in government. Getting back to our fundamental values.” The cobbler chews and cogitates. “Sounds like he’s against the Prime Minister.”

After a moment of silence I hold out my hand to show him what it contains. “My heel fell off.”

He gazes at the object as if he has never seen such a thing, keeping his eyes on it as he gathers vegetables in knotty fingers and consumes them.

“I’m eating.” His accent is so heavily oriental that it takes me a moment to decipher the words.

I take a deep breath to restore my calm and keep my poise, as nothing is more important for a publicist than calm and poise.

“I need it repaired. I’m in the middle of a visit to the shuk with The General.”

The four eyes, the cat’s and the cobbler’s, do not blink. The cobbler tears, scoops, and eats another piece of pita.

“The former army chief of staff,” I say, trying to be helpful, cognizant of the fact that the cobbler might not yet know that the radio has been invented.

The cobbler shows no sign of interest. He eats. The cat rises and stretches.

“He’s come to the shuk to connect with the people. It’s traditional. I need to be with him and manage the news reports.”

The cobbler looks up. “He’s against the Prime Minister?”

“Our campaign is a positive one. The General is for putting Israel first. Security, without apologies. Unity. Honesty in government. Getting back to our fundamental values.”

The cobbler chews and cogitates. “Sounds like he’s against the Prime Minister.”

I feel the black cat rubbing up against my shin. I reach down and pull off the damaged shoe and hold it out. 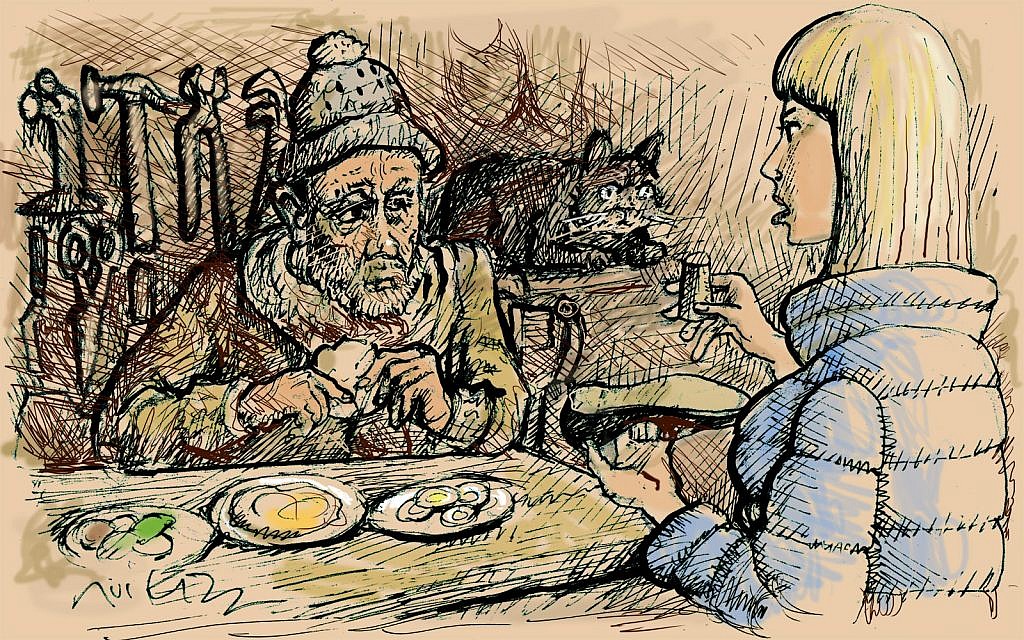 “Put it there,” the cobbler says, pointing with his chin at the counter. The cat jumps up to show me exactly where. “Come back in half an hour.”

“No, you see, we’re in the middle of a campaign appearance. I need to be with my client. There are film crews and I need to help field the questions.”

My patience is gone. I again draw on my reserve of professional self-control.

The cat opens its mouth wide and shows its fangs.

“No other cobbler around here. They’re all dead.”

I turn to leave but the door is jammed shut. I pull gently, then hard, then with all my might, to no avail.

I turn back to face him and point at the door. “Let me out immediately!”

I reach into my bag for my cellphone. My hand can’t find it. I rummage and begin to panic. Then I see it in the cat’s maw. I reach to grab it but it leaps away into the darkness.

“Time?” The cobbler starts on the second pita in his stack, as if time were a commodity he had ceased to use long ago.

“I demand my phone and I demand that you open the door.” I make no attempt now to disguise my anger. “I am a professional woman, with responsibilities. I have taken upon myself to do my part to save the State of Israel, the country we live in, from the irresponsible, self-serving, and divisive policies of our current government. I have accepted a position in the campaign of the only candidate who has the gravitas, honesty, and clean record needed to gain the confidence of our nation. We stand at a critical juncture in our history. There is no time to waste.”

The cobbler picks up a slice of cucumber, examines it carefully, and slowly brings it to his mouth.

“Because The General has devoted his life to the defense of our country, he is inexperienced in the practical aspects of a political campaign and requires the assistance of an expert like me.”

“Alone in the shuk, he will feel awkward and uncomfortable and is liable to say, with good intention, something that will be latched on to by the Prime Minister’s army of social media trolls to paint him as a dangerous leftist and incompetent. That could ruin his campaign. If I cannot return to him immediately, our country will careen toward disaster.”

“You use a lot of words,” the cobbler says.

I turn and pull at the door again, but it proves no less unyielding.

That hits me like a boulder rolling down a hill. I turn and shout: “I will use as many words as I please.”

“You should meet my son.”

“I have no time!” I scream at him. “Can’t you understand? Our country has no time!”

He scoops up more hummus. “Maybe my son can find you some.”

Maybe this is what will save me. Maybe his son will come and open the door.

“Where is he?” I cry out desperately.

“But I have no time,” I protest. The cobbler continues to chew.

Time drags on. I live a lifetime, more perhaps, there in the cobbler’s shop. The door to the shop never opens, no customer ever comes by. The cobbler never reaches the end of his meal.

I want to scream, but I can’t.

I look around and see people in the crowd filming me with their phones. “Obviously staged,” I hear one of them say loudly. “Giving the General a chance to display his empathy and management of a crisis.”

I hear a crunch and open my eyes. I am gasping for air. I see The General’s lean, lined face, full of kindness and concern. Above and behind him, a large man with a grizzly beard and a woolen hat stands beyond a pile of produce and munches on a cucumber. The General is leaning over me. I am lying on the ground. At my side, a medic in a white shirt kneels.

“She’s awake,” The General reports in a deep, clipped voice to the small crowd that has gathered around, as if he is reporting the successful completion of an army maneuver by radio to headquarters.

I try to sit up but he gently pushes me back down. “Another few minutes.” The medic nods.

“Apparently the heel of her shoe snapped off and she fell and hit her head,” the medic is saying into his cellphone.

I look around and see people in the crowd filming me with their phones.

“Obviously staged,” I hear one of them say loudly. “Giving The General a chance to display his empathy and management of a crisis.”

The General has heard as well. He rises. “We stand at a critical juncture in our history. There is no time to waste,” he tells the crowd and the cameras. “We must put Israel first. Security, without apologies. Unity. Honesty in government. Get back to our fundamental values.”

“General,” says a reporter, pad in hand, “can we get some specifics about what policies you plan to pursue to achieve these goals?”

I ignore the medic and scramble to my feet, even though one is still lower than the other. Before The General can answer, I place myself between him and the reporter.

“I’m afraid there’s no time,” I say. “The General is overdue for another appearance. Let me just say thank you to the people here for the wonderful welcome that they’ve given The General today. It shows that the people of Israel are ready and eager for new and strong leadership.”

I glance over at the cucumber hawker, standing behind his piles of produce, to see how we’ve done. He holds a half a cucumber up like a microphone.

Through the noise of the crowd I hear him say: “I’m eating.”

Haim Watzman is the author of “Company C,” “A Crack in the Earth,” and “Necessary Stories.” For more information on his books, and an archive of all his Necessary Stories, visit Southjerusalem.com. Don’t miss Necessary Stories: Between Worlds, a readers’ theater performance of three stories, on Wednesday, February 27, at 8 p.m. at the Harmonya Cultural Center, 27 Hillel St. To buy advance tickets, click here.