For nine days, from May 13 to May 21, Jerusalem saw an unprecedented string of high daily temperatures above 33º C (91.6º F). The record stood all of two and a half months, until August 29.

The fact that September 2020 was the hottest month in recorded history in Jerusalem likely comes as no surprise to anyone who sweated through the heatwave that blanketed the city. The unprecedented run included two days, September 3 and 4, during which the temperature hit 42.3º C and 42.7º C respectively, the highest temperatures Jerusalem had seen in over 100 years, bested only by the 44.4º C, reached on two days in August 1881, according to the Israel Meteorological Service.

While the extremeness of the temperatures was terrifying, scientists say that what is more ominous are the larger trends and how long the heat waves are lasting. A look at the daily temperature data compiled by the Israel Meteorological Service over the last 70 years provides a sweat-inducing peek at just how hot Jerusalem is becoming, and how temperatures and heatwaves once regarded as rare have become commonplace.

According to Prof. Yoav Yair, Dean of the School of Sustainability at the Interdisciplinary Center, a Herzliya-based university better known as IDC, a series of days with temperatures of 33º C (91.4º F) or higher is the threshold for a heatwave in Jerusalem.

Days of 33º C or higher are not overly common in the capital, which usually enjoys cooler temperatures than coastal Israel thanks to its elevation some 750 meters (2,460 feet) above sea level. The lack of humidity also helps make the city a refuge from the muggy climate that envelopes Tel Aviv and most of central Israel.

Most years see a few handfuls of days that reach above 33º C, and every few years the city may even see a string of six or seven days, according to an analysis of IMS data. At the same time, before 1990, it was not uncommon for whole years to pass in which the mercury only hit the milestone once or twice, if at all. 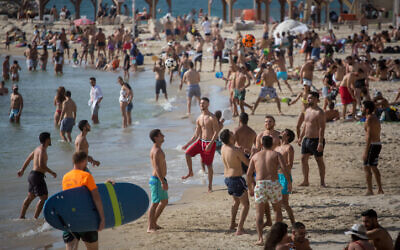 Israelis enjoy the beach in Tel Aviv, as temperatures rise to 40 degrees in some parts of the country, May 16, 2020. (Miriam Alster/Flash90)

Now that has all changed.

And then the heat began to build again. From 1990 to 1999 there were 127 heatwave days. The next decade, Jerusalem experienced temperatures of 33º C or higher 137 times. and from 2010 to 2019 there were a whopping 230 days in which the temperature reached or surpassed the toasty threshold.

As of October 8, this year has seen 40 heatwave days. Assuming that the year is not a major outlier, this upcoming decade would see some 400 heatwave days in Jerusalem. 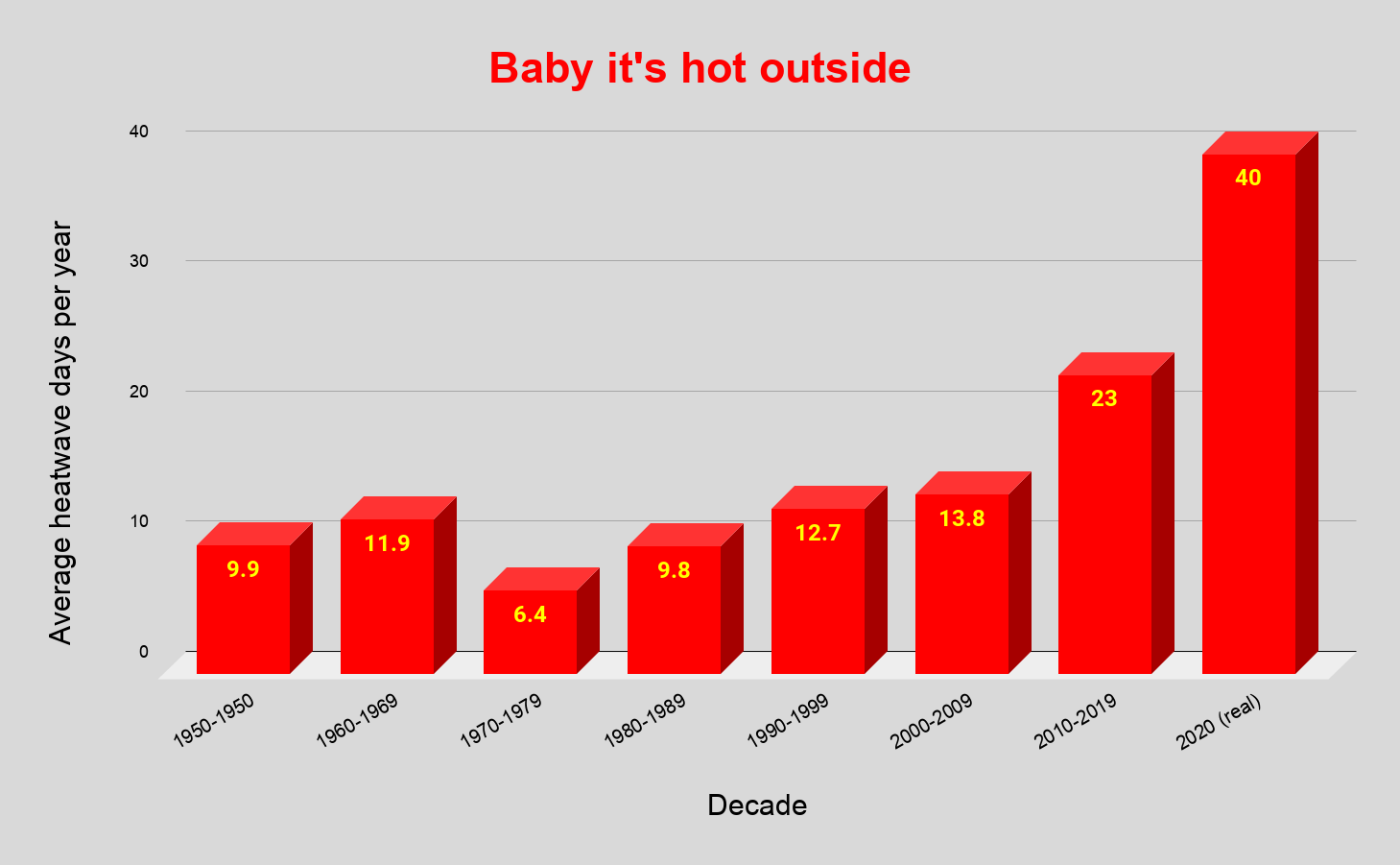 “None of this is surprising,” said Yair. “Temperatures in Israel have gone up by around 1.4 degrees between 1950 and 2017, with most of the increases happening over the past 30 years.”

And it is only expected to get worse.

The month of September, which supplied 18 of the year’s heatwave days, broke records across Israel, becoming the hottest September on record in Jerusalem and most of the rest of the country, according to a report from the IMS. 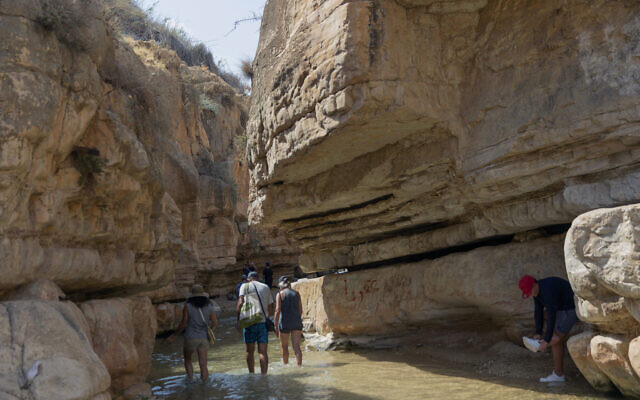 Israelis make their way into a water spring to cool off, during a heat wave that is affecting the region, at Wadi Qelt, near the West Bank city of Jericho, Friday, Sept. 4, 2020. (AP Photo/Nasser Nasser)

There are signs, though, that the heat seen in September was not an every year event. The extreme heat, which was felt throughout the region and in Europe as well, was registered as an anomaly, and in Israel was attributed to hot easterly winds blowing in from the Arabian peninsula, circling around a low-pressure system.

In Jerusalem, highs spiked to above 40º C (104º F) for three days in a row. The event appeared extraordinary, especially given that according to the IMS, temperatures in Jerusalem have only crossed the 40º C threshold seven times since 1950, including those three days.

It’s not unprecedented, however. A report from the service released in mid-September noted that it had happened three times before in Jerusalem’s history since 1860: June 1942, July 1888 and August 1881, when that record 44.4º C temperature was recorded. Those extremes could not be attributed to the global trends of climate change being seen now. 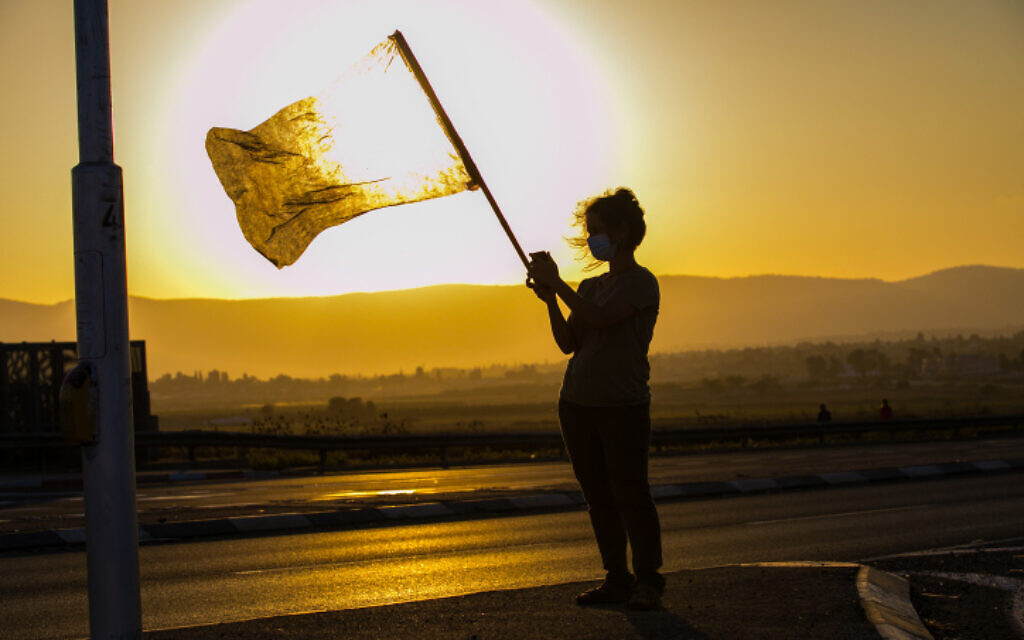 A protester waves a flag in the Jezreel Valley, Northern Israel, on September 26, 2020. (Anat Hermony/Flash90)

Part of a worldwide phenomenon

But there are many more signs that even if extreme temperatures are the result of local factors, the persistence and frequency of the hot days are part of a larger global trend.

A 2017 UN report on climate change challenges in the Arab world predicted there would be 40 to 80 days per year with temperatures between 35º C and 40º C by the end of the century across the region, depending on carbon emissions models. 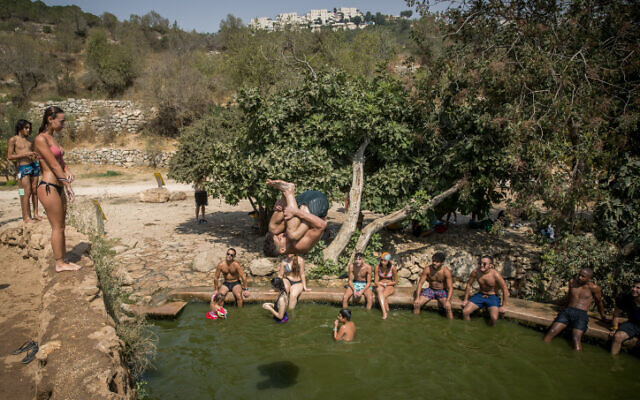 In Jerusalem, the average high temperature in September was 33.4º C, five degrees above the average between 1995 and 2009. Nationwide, according to the IMS, only three months have ever had higher average temperatures: August 2010, July 2015 and August 2017.

And those numbers might not even tell the whole story. The IMS was forced to base much of its data for September on a secondary weather station that recorded slightly lower temperatures. That’s because on September 4, researchers were unable to reach the main monitor atop a central Jerusalem building to confirm its reading of 42.7º C, due to a work accident, leading the IMS to rely on the secondary monitor on Hebrew University’s Givat Ram campus for that month only. (Most of the data in this report is based on the main monitor’s findings, which the IMS has continued to publish.)

It’s not only the days. Temperatures in early September were so consistently high in Jerusalem, according to the IMS, that the daily low actually surpassed the average high at one point. 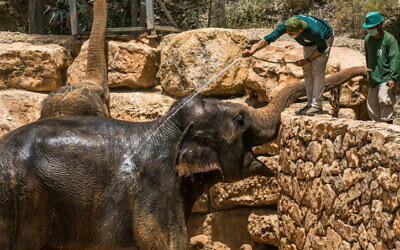 Elephants enjoy a shower at Jerusalem’s Biblical Zoo on a hot summer day, on May 20,2020.
(Olivier Fitoussi/Flash90)

In May, IMS data shows that nights stayed so hot that low temperature remained above the average high for that period for a week straight.

Jerusalem is far from alone in feeling the heat. A report from the European Union’s Copernicus Climate Change Service Wednesday found that the month was the hottest September on record worldwide, helped along by an extreme heatwave that blanketed Siberia for much of the summer.

According to the climate monitor, May and January 2020 were also the hottest on record globally, and every month of the year so far has been in the top four heat-wise.

“The year-to-date global temperature anomaly shows that 2020 is on a par with 2016, the current warmest year on record,” a statement from Copernicus said. “In addition, for the same period, 2020 is warmer than 2019 — the second warmest year currently on record.”

Across Europe and the Middle East, cities have sweltered for days or weeks under record temperatures. 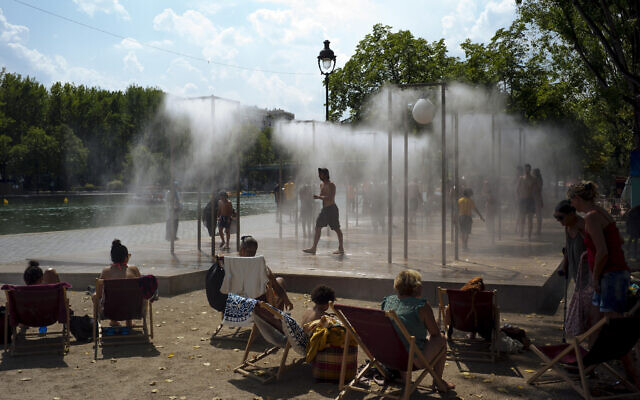 People cool off under a fountain along the Canal de l’Ourcq in Paris, Tuesday, Aug. 11, 2020. (AP/Kamil Zihnioglu)

According to Yair, the IDC expert, Israel — along with the rest of the Middle East and North Africa — is seeing temperatures rise faster than the rest of the world because the band of tropical climate to the north and south of the Equator is expanding.

According to an article published by the Yale School of Environment in October 2018, the tropics include both wet and dry regions. The wet regions are contracting and the drier ones are expanding, bringing ever-drier weather to places such as the Mediterranean.

These shifts, according to the article, are caused by changes such as the opening of the southern hemisphere ozone hole, warming black soot in polluted air from Asia, and rising air — as well as sea surface — temperatures caused by greenhouse gases [from burning fossil fuels]. 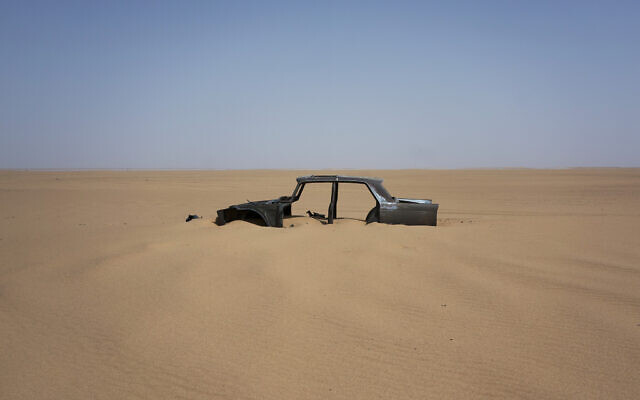 The frame of an abandoned Peugeot 404 rests in Niger’s Tenere desert region of the south-central Sahara, June 3, 2018. (AP/Jerome Delay, File)

Yair, who researches atmosphere and extreme weather events, said the extreme heating in the region could not be untangled from climate disasters happening around the world, including devastating wildfires in California and Australia this year.

“What we are seeing are humanity-driven climate disasters, not natural disasters, “ he said, blaming politicians for refusing to deploy policies that would help the country catch up to the rest of the world on fighting global warming.

“The human-driven contribution is clear, strong and undeniable,” he said. “And this is only the beginning.”