Jerusalem does not yet have a stairway to heaven. But as its buildings reach higher and higher into the sky, there is an ongoing debate about how best to accommodate a growing population: by building upwards or outwards.

This week, another stage in on-off attempts by planners to build out into Jerusalem’s largely pristine western hills came into sharp focus as people queued to have their say at a special Knesset committee meeting on the subject and preparations were made for a demonstration Thursday outside the national planning committee (starting 3:30 p.m. at 12 Beit Hadfus Street, Jerusalem) which is set to debate an appeal against last July’s decision by district planners to build outwards into green space.

At issue on this occasion is Reches Lavan (White Ridge) — named for its light, chalky rock — a pastoral area of ancient agricultural terraces and springs near the Jerusalem Zoo and the southwest neighborhoods of Kiryat Hayovel, Givat Masua and Ein Kerem, and Moshav Ora just outside the city.

Home to Mediterranean vegetation and large mammals such as mountain gazelle and hyena, the whole area, with its natural springs and spring-fed pools, serves as a green backyard for Jerusalemites. 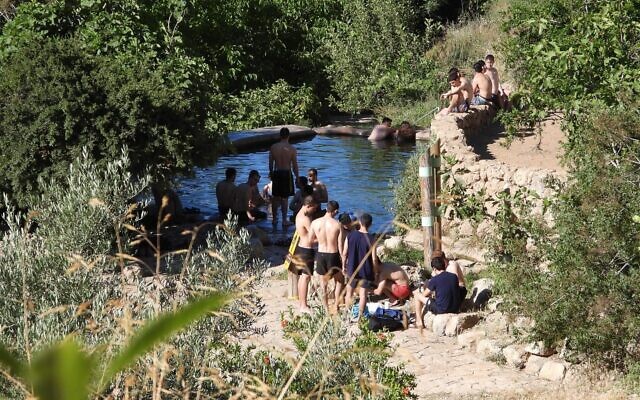 The Lavan spring on the outskirts of Jerusalem. (Dov Greenblat, Society for the Protection of Nature in Israel)

As Yael Eliashar of the Jerusalem district office of the Society for the Protection of Nature in Israel told the Knesset Internal Affairs and Environment Committee on Tuesday, the pools are to Jerusalemites what the Mediterranean Sea is to Israel’s coastal dwellers.

Masters degree student Maya Star, an activist at the Saving the Jerusalem Hills nonprofit organization, told the committee, “When I was young, I thought I’d leave Israel and live somewhere else. Now that I know it, this landscape, with its clean air and pools, is what makes me and my friends love this country. These springs are part of the culture of young Jerusalemites. To enjoy the landscape is a basic right.”

Added Hanan, 18, a fellow activist, “It’s my reason for living in Jerusalem.” 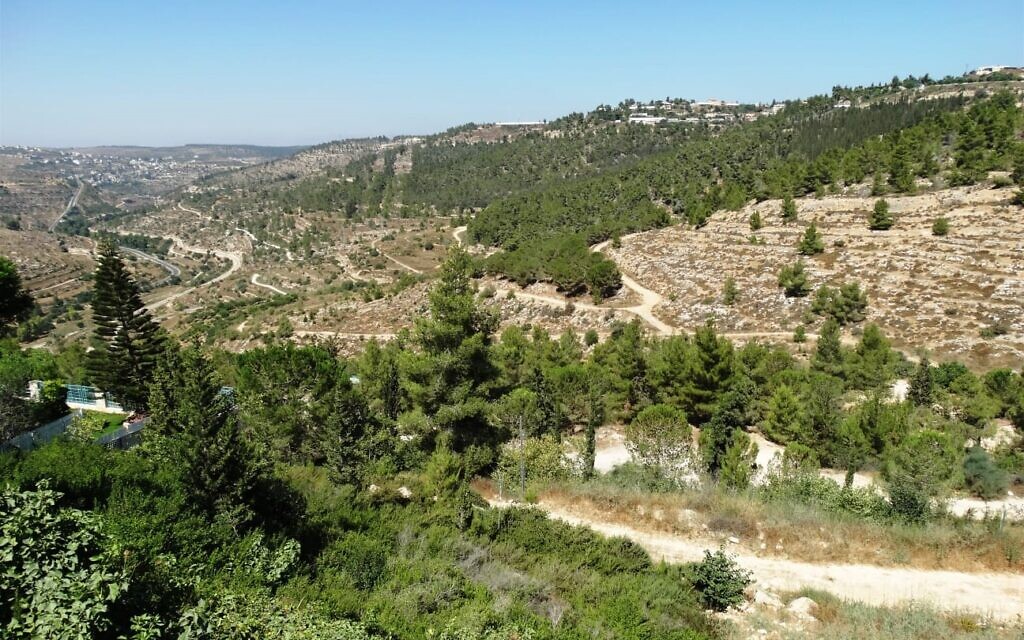 Reches Lavan, or White Ridge, west of Jerusalem. (Dov Greenblat, Society for the Protection of Nature in Israel)

Nevertheless, district planners have green-lit construction of 5,250 residential units, in buildings of five to 12 stories, along with 300 hotel rooms and commercial space, on the ridge. Planners are also already at work on a four-lane highway that will cut through the area, forming part of a western ring road.

A case of déjà vu

Until the 1990s, Jewish West Jerusalem was characterized by relatively low-build housing, with the odd high-rise here and there. 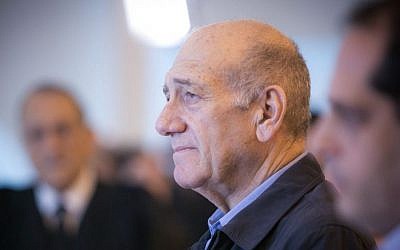 Former prime minister and Jerusalem mayor Ehud Olmert at the Supreme Court on December 29, 2015, after the court reduced his sentence to 18 months, following a conviction on corruption charges in the Holyland affair. (Noam Moskowitz/Pool)

When Ehud Olmert, who went on to become prime minister, replaced the long-serving Teddy Kollek as mayor in 1993, he looked mainly upwards and westwards.

The most notorious testament to his attempts to build towers in the city is the Holyland project for which he and nine others were convicted of graft and for which he served 16 months in prison.

But he also set his sights westwards. Expanding to the mainly Palestinian north, east, or south of Jerusalem is politically problematic. (He was mayor in 1997 when the newly elected Benjamin Netanyahu’s government approved the construction of the southern neighborhood of Har Homa.) A bird’s eye view of the Holyland complex, one of the first of Jerusalem’s high-rise projects. (Nati Shochat/Flash 90)

In 1996, the municipality and the Israel Lands Authority commissioned the Israeli-Canadian architect Moshe Safdie to create a master plan for 20,000 housing units that would extend from Ramot in the north, through Mevasseret Zion and southwards to the Rephaim Valley, taking in part of Reches Lavan. That plan was rejected by the National Planning Committee in 2007, after a huge public outcry and campaign.

In 2014, the Israel Lands Authority tried again, this time to build a new city called Bat Harim close to Tzur Hadassah, 12 kilometers (7.5 miles) southwest of Jerusalem, and another community on Mount Harat. Olmert’s successor as mayor, Nir Barkat, now a Likud member of Knesset, opposed building into areas of nature, and a year later, those plans were canceled as well. A Google Earth screenshot of the Jerusalem Hills west of Jerusalem. Reches Lavan is marked in red.

This time, the push for increased building in the city is coming from the government, or more precisely, from the Committee for Preferred Housing Sites, known by its Hebrew initials as Vatmal, set up in 2014 to fast-track planning and cut red tape.

Israel’s population is set to double in 30 years in a dot of a country, just a little bigger than New Jersey in the US or Wales in the UK, that already has one of the highest population densities in the West and rapidly depleting open space.

In a top-down fashion, the Vatmal has approved the construction of 1.5 million housing units countrywide by 2040, 297,000 of them in the Jerusalem District. In practice, the expectation is that 142,000 units will actually be built within Jerusalem by 2040, according to the Knesset research unit, with 86% of these coming online via urban renewal, a euphemism for pulling down seedy old inner-city buildings and constructing new ones that are much higher.

The SPNI’s Jerusalem district office has researched 4,000 plans and determined that this goal can be met without digging up the local countryside.

According to the Jerusalem Residential Reserves report that it published early last year, there is room in the city for nearly 125,000 potential housing units, of which nearly 80,000 are relatively easy to realize. The paper recommends implementing a basket of complementary policy tools, such as redesigning old plans that were never implemented and reviewing buildings that were started but that for whatever reason have never been completed and stand empty. “Reches Lavan is the opening shot for the destruction of the Jerusalem hills,” the SPNI’s Liron Din told the Knesset committee, adding that an additional 1,500 units were being considered for the ridge to justify building a light rail connection that could threaten another three area springs.

The SPNI wants the entire area of the springs to be declared a nature reserve.

But life is not that simple. Replacing slums in inner-city areas with new build offers limited profit — and because the government has so far not been willing to incentivize developers financially (in the form of grants, subsidies or tax reliefs), it is offering instead what it calls “complementary land” on which such developers can make more money. The compensatory land idea, being offered countrywide, forms part of an agreement reached between the Jerusalem Municipality, currently under Mayor Moshe Lion, the Finance and Housing ministries, and the Israel Lands Authority. Such agreements allow the state to sell to one or more developers land that it owns within the boundaries of a particular local authority. The developers buy the land in the knowledge that the council has committed to building a certain number of apartments.

The deal, usually for several high-rise buildings, is attractive to the building companies because of the profits to be made from the sale of so many units. The local council benefits because the government transfers to it some of the earnings from the sale of the land to allow for the creation of new infrastructure. It is presented as a win-win. 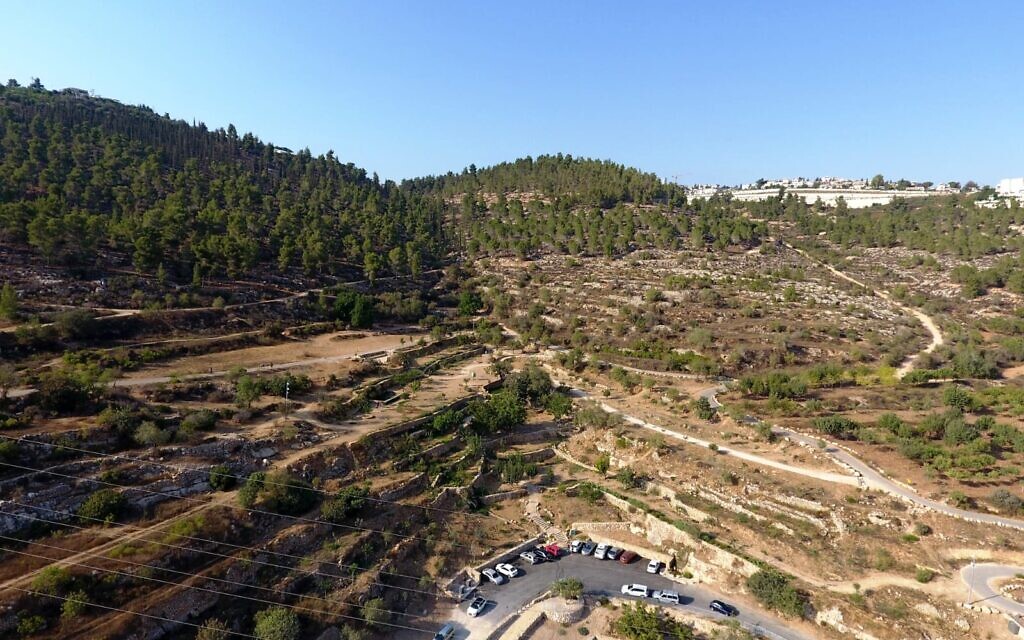 Reches Lavan, or White Ridge, west of Jerusalem. (Dov Greenblat, Society for the Protection of Nature in Israel)

Around half of the plots on Reches Lavan have been earmarked for compensatory land, some of them to encourage developers to carry out renewal in the notoriously run-down Nurit and Stern streets of Ir Ganim near Kiryat Hayovel, the Knesset committee was told. The other half, explained Amnon (Ami) Arbel, deputy director of the city’s planning department, will provide housing for which there is no space in the city.

Arbel claimed that all alternatives had been checked and noted efforts made to preserve greenbelt for city residents, such as the 1,500-hectare (3,700 acres) Jerusalem Metropolitan Park enveloping the capital to the north, west and south. In the absence of financial incentives, “complementary land” in Reches Lavan was the only option and it was “worthy.”

Arbel received backing from MK Yitzhak Pindrus (United Torah Judaism), a former Jerusalem deputy mayor, who explained that construction in the city was restricted by the number of buildings with preservation orders. While it was fine to talk about springs, the lack of sufficient building and affordable housing was causing the young to flee from the capital and provoking conflict between different communities (secular or traditional and ultra-Orthodox) by forcing one (invariably the Haredim) to move into neighborhoods dominated by less-religious populations. “You need a decision on what you give up and how much,” he said.

Ori Dvir, representing the Finance Ministry, told the committee that officials were looking into economic alternatives to complementary land to include in the Economic Arrangements Bill that accompanies the state budget, but he did not elaborate.

With environmental organizations and residents once again swinging into gear to protect the hills, some 6,000 Israelis have objected to the plan and around 15,000 have signed a petition to have it thrown out.

On Tuesday, they put their case to the Knesset committee, whose chairwoman Micky Haimovich vowed at the end to explore alternatives to land compensation. Mitzpeh Naftoah in the background (right) as seen from Lifta at the western entrance to Jerusalem, April 13, 2009. (Flickr/Ron Almog, CC BY 2.0)

One after another, speakers on Zoom warned of the dire consequences of what they called the planners’ “salami” tactic of starting with construction on Reches Lavan before moving onto build on other hills — Mount Harat, Mitzpe Naftoah in Ramot, the slopes of Moshav Ora and a spur near Hadassah Hospital, Ein Kerem, one ridge at a time.

These included impact on the flora and fauna, already under urban pressure; the destruction of terraces, watchtowers and other remains from the ring of ancient farming communities that once sustained Jerusalem; the likelihood that construction will dry out the springs and affect the groundwater; and the severing of vital ecological corridors in the Refaim Valley that enable wildlife to pass safely through urban areas and connect with one another. Others spoke of the expectation that a planned new four-lane highway, part of it on an existing windy country road, will inevitably invite additional construction alongside it; the destruction of 11,000 trees needed now, more than ever, to help counter climate change; the importance of forests not only for reducing air and noise pollution but for nurturing physical and mental well-being, particularly among poorer populations living in the tenements close to Reches Lavan; the refusal of the Israel Lands Authority to sell potential compensatory land within the city; the concern that a spanking new neighborhood in Reches Lavan will draw better-off populations and weaken the city’s core; and the claim that residential supply in Jerusalem is already outstripping demand, with many developers unable to sell.

Noting that he had “never heard of destroying a neighborhood to build a forest,” Yaniv Goldstein, of Givat Masua, said, “If the choice is between building in the forests or at the Western Wall, I’d understand, but we’re not there yet. To cut down 11,000 trees because the government doesn’t want to put its hand in its pocket is twisted. Where you’re planning 30 stories in the city, plan 32 instead.”

Long-time activist and researcher Ron Havilio, who helped to get the village of Ein Kerem and its cultural landscape included into UNESCO’s list of tentative World Heritage sites — a first stage toward being nominated and declared a full-blown heritage site — told the committee, “There are three areas that must be preserved. The Old City Basin [including the Old City], those parts of the city built before [Israeli independence in] 1948 and the Jerusalem hills from Lifta (also on the tentative UNESCO list) through Ein Kerem to the Refaim Stream. All the rest, built largely in low-quality, low-density format, is where urban renewal should be carried out.” 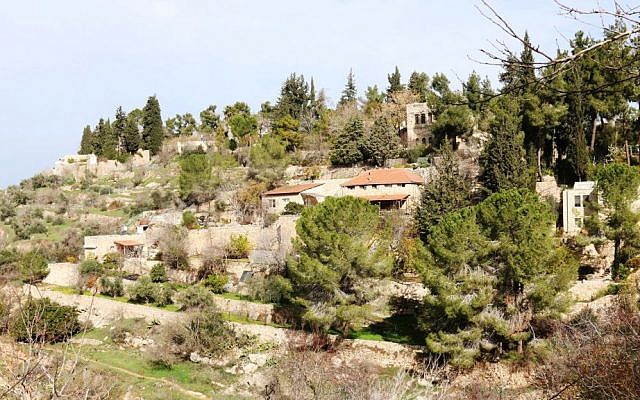