This year, it will be empty, its gates locked — along with the rest of the nation’s military cemeteries — with police officers standing guard outside and turning away anyone who attempts to enter, as a precautionary measure to prevent a further outbreak of the coronavirus.

There are few things as sacrosanct as Memorial Day, or Yom Hazikaron, in Israel, a country that has seen more than its fair share of wars and terror attacks, and where many, if not most, people have lost a friend or relative.

The decision to shutter the country’s military cemeteries was met with deep disappointment and frustration by bereaved families and the organizations that represent them. 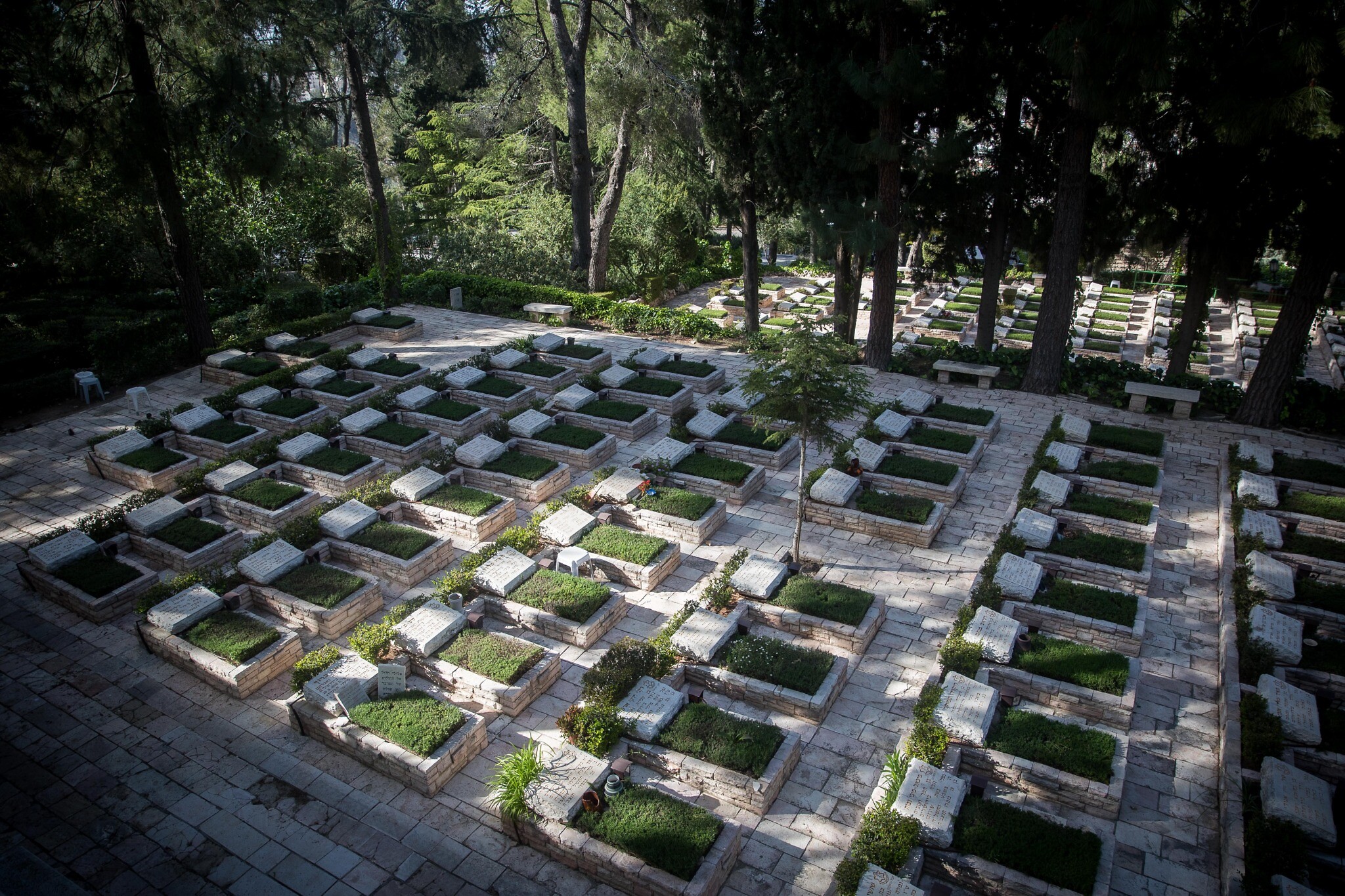 View of the military cemetery on Mount Herzl in Jerusalem on April 22, 2020. (Yonatan Sindel/Flash90)

The government couldn’t organize staggered visits throughout the day to prevent crowding? Or limit entrance to only immediate family or even to just one representative from each family?

Defense Minister Naftali Bennett told reporters Wednesday that all of these options were considered and rejected — deemed unfeasible for one reason or another. Letting people into the country’s military cemeteries would create a “coronavirus bomb,” he said.

Osnat Benovici, whose brother Lt. Uri Sal-Man died in 1978, said she understood the need to close the cemeteries, but that it would nevertheless be emotionally difficult to alter her family’s Memorial Day traditions.

“What’s the phrase? ‘In death, he saved lives.’ So we’ll protect our lives,” she said through a multi-colored face mask. 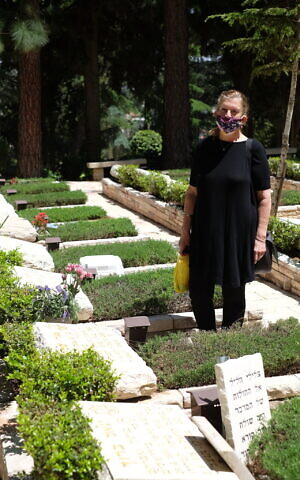 Osnat Benovici visits the grave of her brother, Lt. Uri Sal-Man, on Mount Herzl in Jerusalem ahead of next week’s Memorial Day, on April 23, 2020. (Judah Ari Gross/Times of Israel)

Benovici visited Uri’s grave on Thursday, five days before Memorial Day. “I figured there wouldn’t be too many people,” she told The Times of Israel.

She was right. The terraces of graves were largely empty on Thursday morning, with just a small number of individuals, couples and occasionally families ambling through the cemetery.

Israel Defense Forces soldiers and teenagers from various youth movements set up tables at the entrances to Mount Herzl, handing out flowers and bottles of water to the visiting bereaved families. The only sounds were birds chirping, wind blowing through the pine trees shadowing the graves, and the faint sounds of playback as production companies worked on the other side of the hill to prepare the sound systems for the national ceremonies that will be held on Memorial and Independence Days. 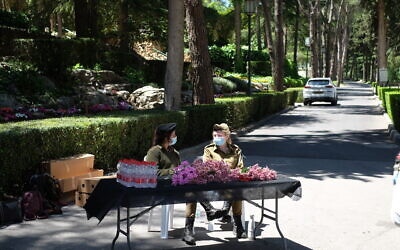 IDF soldiers hand out flowers and bottles of water to bereaved families visiting the graves of loved ones on Mount Herzl in Jerusalem ahead of next week’s Memorial Day, on April 23, 2020. (Judah Ari Gross/Times of Israel)

Instead, Benovici visited the cemetery alone on Thursday. The gathering of friends and family would happen over the Zoom video-conferencing application — “like we did on Passover” — and the visit to her mother wouldn’t take place this year, she said.

Chaim Frenkel didn’t visit one grave on Mount Herzl on Thursday — he visited 27, distributing to each a note and a flower, and a rock in accordance with the Jewish tradition, sometimes adding a salute. 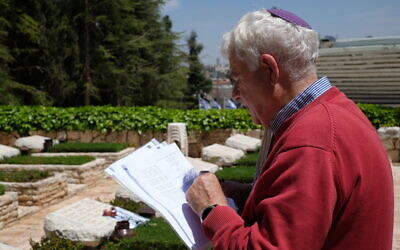 Chaim Frenkel checks a list of graves he is supposed to visit on Mount Herzl in Jerusalem ahead of next week’s Memorial Day, on April 23, 2020. (Judah Ari Gross/Times of Israel)

The 27 graves belonged to members of his paratroopers unit that were killed during the 1967 Six Day War. Frenkel didn’t personally know any of them.

“They fell in the battle for Jerusalem. I only joined the unit a year later,” he told The Times of Israel.

He doesn’t normally visit those 27 graves. But veterans of his unit — Paratroopers Brigade, 88th Battalion, “Bet” Company — had realized that family members might not be able to visit the graves of everyone in the unit because of the coronavirus restrictions.

“So I’m visiting the graves in Jerusalem,” said Frenkel, an attorney who lives in the capital.

Holding a print-out detailing the 27 burial plot numbers, personalized letters for each fallen soldier and an armful of flowers, Frenkel moved methodically from grave to grave, checking off the names on his list as he went. 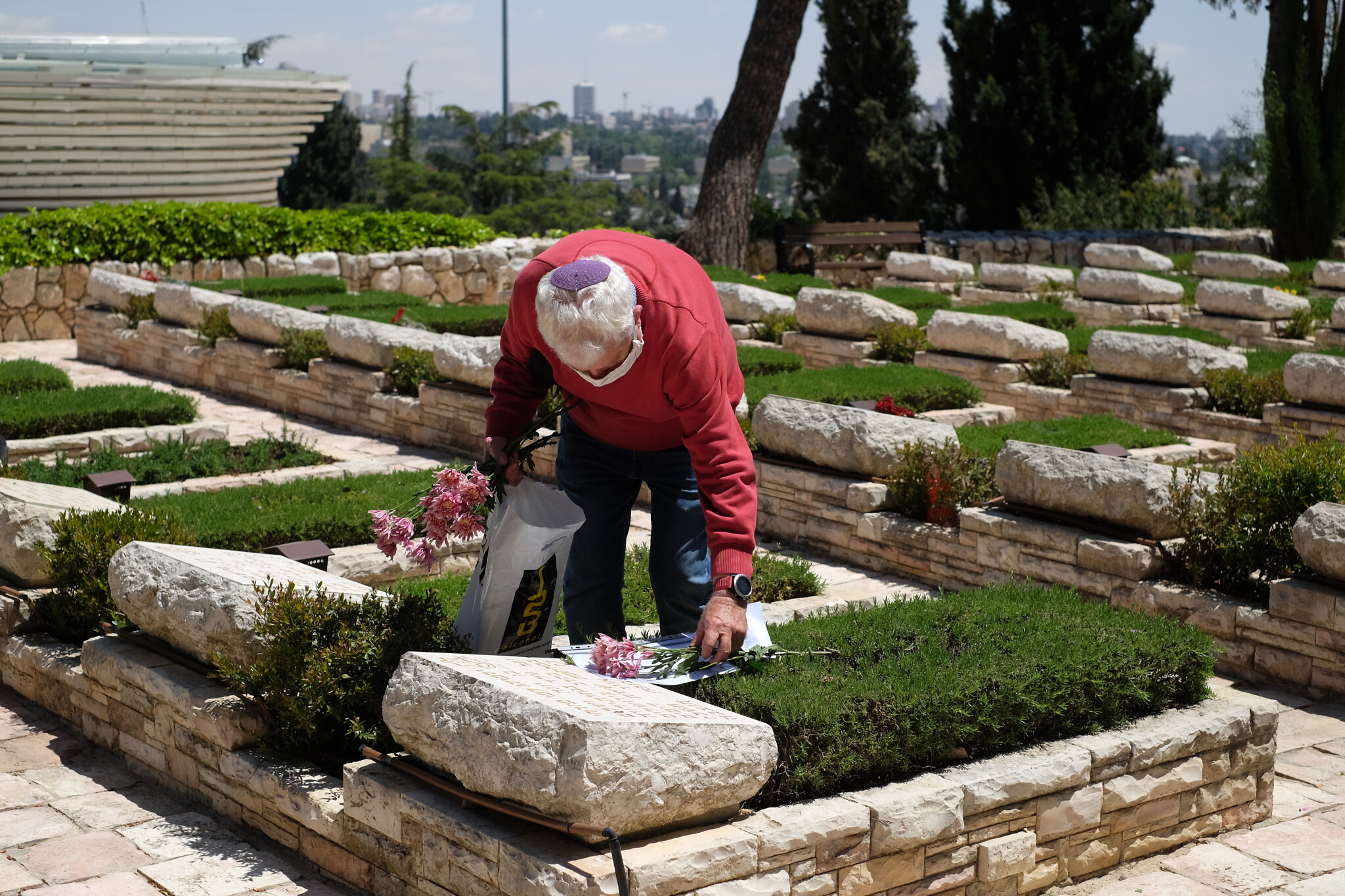 Chaim Frenkel puts a flower and a note on a grave on Mount Herzl in Jerusalem ahead of next week’s Memorial Day, on April 23, 2020. (Judah Ari Gross/Times of Israel)

Walking between the rows of graves — raised platforms made of Jerusalem stone with plants in the middle — Frenkel pointed to one of them, belonging to Eitan Nave, which had a small plaque on the bottom.

“Look at that — he got a Medal of Honor and a citation of merit from the brigade commander. He’s famous, you know. You know that song, ‘Ammunition Hill,’ where they talk about Eitan?” he asked through his striped cloth mask.

Frenkel was referring to a song written by Yoram Taharlev about a fierce battle on Ammunition Hill during the Six Day War, in which heavily outmatched paratroopers squared off against Jordanian troops that were dug into a series of reinforced bunkers and trenches.

“I didn’t have time to ask anyone to volunteer, so I sent Eitan. Eitan didn’t hesitate for a moment, he went up and started using the submachine gun… Eitan would cover us from above and we would clear out the bunkers from within, until he was hit in the head and fell inside,” the song goes.

“Well, this is that Eitan,” Frenkel said, snapping a photograph of the grave with the note and flower he’d placed on top of it.

Irit Ramon-Tzuker and some of her family drove roughly two hours from their home in the religious community of Kibbutz Meirav in the shadow of the Gilboa Mountain in northern Israel to Jerusalem’s Mount Herzl on Thursday to visit the grave of her father, Cpt. Uzi Ramon, who was killed in the Six-Day War.

The Ramon-Tzukers — Irit, her husband, two sons, two daughters-in-law and several grandchildren — were by far the largest group in the otherwise sparsely filled cemetery, needing just a few IDF soldiers and this reporter to get the 10 men needed to form an Orthodox prayer quorum so that Irit’s husband could recite the traditional Kaddish prayer. 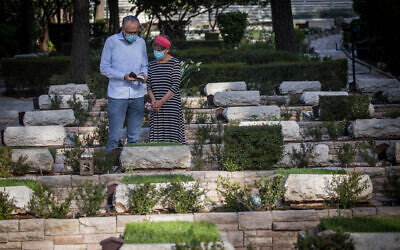 Irit was a child when her father was killed in the 1967 war, falling in a battle near the West Bank city of Jericho.

This year holds special importance for the family, as in 2019 the IDF awarded her father a posthumous promotion to captain from lieutenant that he’d been promised in life, but hadn’t been given due to bureaucracy and confusion.

“It was 52 years late, but they gave him the rank,” Yishai said, a blue cloth mask over his face.

Indeed, Uzi Ramon’s gravestone was raised slightly higher than his neighbors’, owing to the stone plaque with his updated rank that was affixed over the original headstone. 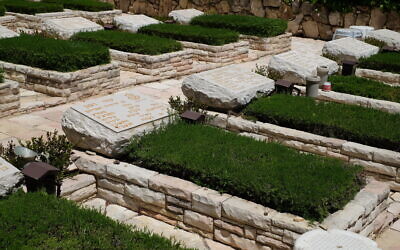 A view of the grave of Cpt. Uzi Ramon on Jerusalem’s Mount Herzl military cemetery on April 23, 2020. (Judah Ari Gross/Times of Israel)

Instead of visiting her father’s grave on Memorial Day, Irit has organized a virtual ceremony for her community of Kibbutz Meirav, where most, but not all, of her family lives.

“We’ll stand together, but apart, during the siren,” she said, referring to government regulations requiring people to remain two meters from one another.

Yishai said he knew this year would be different than previous Memorial Days because of the new restrictions, preventing the large ceremonies and group activities that ordinarily mark the day. But a basic element of the holiday — the connection between all Israelis — would remain.