Rivka Street ascends so steeply from the traffic light by the Hadar Mall that I often stop to rest halfway up, and to reprimand myself for not getting more exercise. Today I’m puffing all the more because the Pulcinella mask that my daughter insisted I wear for Purim is pressing on my nose.

There’s a little tree I like to stop at because it blocks the view of the open garbage bins on the other side. This Tuesday morning my spot is occupied. It’s a young woman with a two-wheeled shopping cart. Her navy blue cloth coat fits her slim figure well and I guess that she’s in her late twenties, half my age. Her face is smooth and made up, and her hair is covered in a tightly wound scarf the same shade as her coat.

Though there’s a cold breeze blowing, she wipes her forehead. She takes a deep breath, as if preparing herself for the rest of the climb. I can’t, under the circumstances, take my usual rest. It just wouldn’t look good. So I politely offer to help and, when she smiles sadly, take the cart in hand and pull it behind me. It’s heavier than I expected and I keep correcting my balance. It feels as if the contents shift with every step I take. I feel myself sweating under the mask, not to mention feeling ridiculous, but tonight is Purim and pretty much everyone in Jerusalem is decked out in costume of one sort or another.

I introduce myself and she gives her name. It’s Orel.

“Uva letziyon go’el,” she says. A Redeemer has come to Zion. “Heaven must have sent you. I didn’t know how I was going to get home.”

I ask her where home is and she gestures toward the long train-like housing project on the next street over, just beyond my own building. “I’ve been there two years but I’m still not used to the hill up from the Osher Ad,” she says, naming the huge cut-price supermarket on the mall’s basement floor. Its name means Eternal Happiness.

“You bought a lot of food for the holiday.” She’s walking at a good clip and I feel my lungs are giving out trying to keep up.

“Not so much. It’s just me and Yosef Haim. And he’s only four years old.”

So now I get why she’s lugging the groceries herself. She leads me into the drive that connects Rivka with our street. A few steps in I almost lose balance as something big in the cart moves. Then I nearly have a heart attack when the Incredible Hulk’s head pops out of it.

“Can I get out now, Ema?” says the head, whose dank synthetic hair is topped by a black velvet kipah.

Orel firmly pushes him back in. “Not until we’re home, Yosef Haim. Your father might be watching us.” She covers the cart’s opening with its flap and makes sure that the Velcro holds.

She continues walking and I follow, looking back at the cart. She turns right onto our street.

“Three entrances up,” she says, glancing at me over her shoulder. “You’re very kind.”        She surveys the street from left to right and right to left and up and down. If she had a pair of binoculars she’d look like a soldier in an outpost on the Lebanese border after receiving an alert that terrorists have been sighted nearby.

I hear the Incredible Hulk’s muffled voice. “Ema, can I get out now?” Orel shushes him. She pivots to turn into the entrance motions for me to follow her. She’s impatient. I’m still maneuvering the cart up the three steps to the first landing and she has the door to her apartment open already. She takes the cart from me and pulls it in over the threshold. Clearly, I’m not meant to enter. She undoes the Velcro, lifts out her son, and places him on the floor. He gazes at me, with what I assume are large brown eyes, although they are invisible behind the mask. He looks up at his mother and then back at me. 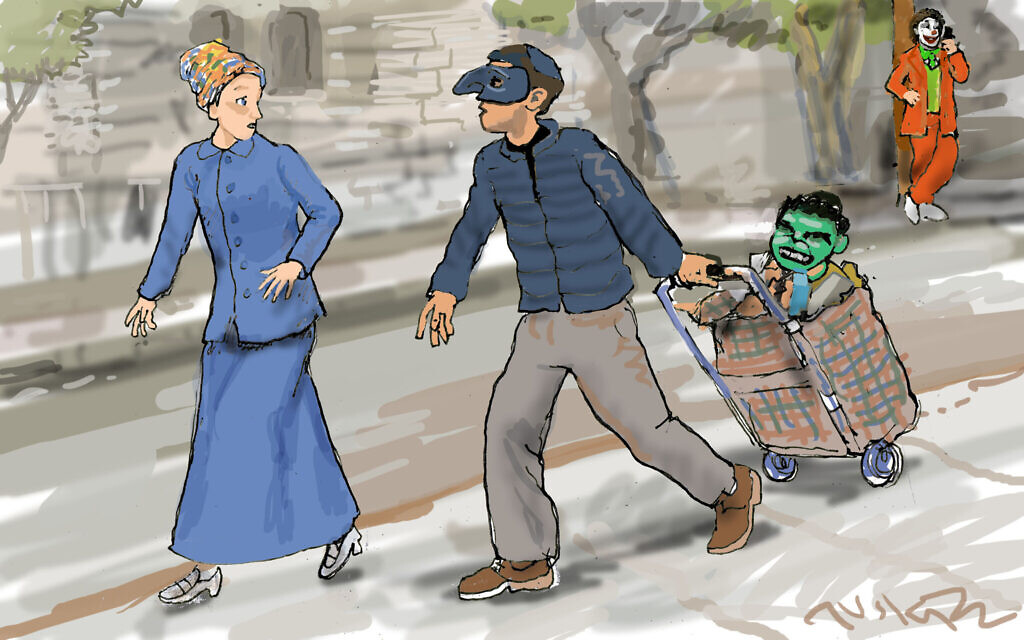 “What are you dressed up as?”

“It’s a mask my daughter bought me. It’s Pulcinella. An Italian clown.”

He runs up to me and punches me in the stomach. “Not a clown. Clowns have frizzy hair and red noses.”

“Yosef Haim!” Orel exclaims. “That is very bad behavior! And this man just helped me with the cart!”

Now he attempts to punch his mother, but she catches his hand firmly. “I don’t want a different Abba,” he protests.

“This is not a different Abba. He’s a nice man.” She kneels down and takes him in her arms.

“He’s not a clown.” I hear the anger simmering in his voice. Then he begins to sniffle. “I miss Abba. Is he outside?”

“I looked all around and I couldn’t find him,” she says. “Now be a good boy and go play in your room.”

“I’m the Incredible Hulk. I want to go out and stomp on bad people.”

“It’s too cold and I have to cook for Purim.” Yosef Haim walks reluctantly in the direction she points, looking at me over his shoulder. “I don’t want another Abba,” he says, more to himself than to me, as he disappears.

“I’m divorced,” she says through the open doorway. She sounds like she’s apologizing. “Sometimes there’s just no choice.”

“I’m sorry. I’m glad you had the courage to leave him.”

“I’ve moved twice since then. Now he’s found this place, too. Sometimes he comes looking for us.”

She sighs, but stands erect. She brings a hand up to her eye to wipe a tear away. Then she quickly steps through the doorway and down the three steps to the street and looks to her right and left. She returns and whispers: “He’s there. Look to the right.”

I step out. Up the street, I see the Joker leaning against an electric pole and texting on his phone. When I turn back to the doorway, I see that the Incredible Hulk has reappeared. He’s jumping up trying to see the message on the phone his mother is reading.

“It’s Abba, it’s Abba, isn’t it Abba?” Yosef Haim chortles. He tries to dash for the door but I block him. He punches me again in the stomach. “I want to see my Abba!”

Yosef Haim turns his fists against his mother. “He’s my Abba! I don’t want another Abba!”

Her despair turns to anger. She shouts at me. “Why can’t I see your faces?”

“There’s a court order. He’s not allowed to be here.”

“He’s trying to get the social worker to take Yosef Haim away from me.”

With his mother in despair and me trying to get my phone out of my pocket, Yosef Haim sees his chance and makes a dash for the door, too fast for either of us to stop him. Orel screams.

My first instinct is to run after him, but my second instinct is that I don’t want to tangle with the Joker. I finally get my phone out of my pocket and try to remember if the police emergency number is 100 or 101 or 102. But the screen stays black and no combination of buttons turns it on.

Orel’s eyes are looking beyond me. I swivel around and find myself, that is Puncinella, facing the large villain and the small superhero. I put my hands out in front of me.

“Look, I was just doing a neighbor a favor. I didn’t bargain on landing in the middle of a horror movie.”

“Ema says he’s going to be my new father,” the Incredible Hulk tells the Joker.

I didn’t even feel the fist hit my nose. I spent Purim at Hadassah. Everyone there was wearing masks. A surgeon told me that the blow pushed the mask so deep into my flesh that they had to dig it out. A policeman came to interrogate me. He asked me to describe the assailant and didn’t understand why I nearly fell out of bed laughing.

The day after Purim my daughter checked me out of the hospital and drove me home. As we pulled into our parking lot, I saw a moving van pull away from Orel’s entrance.

Rivka Street ascends so steeply from the traffic light by the Hadar Mall that I often stop to rest halfway up, and to reprimand myself for not getting more exercise. There’s a little tree I like to stop at because it blocks the view of the open garbage bins on the other side. I stay there longer than I need to catch my breath, so I don’t have to look at them. If a woman stops there, I ignore her and look away. I don’t have a mask on and don’t want her to see my scar.