Main image by Yaakov Schwartz / Times of Israel, shows people placing flowers in front of the synagogue in Halle, Germany, October 11, 2019, where a memorial has been placed for the victims of the shooting there on Yom Kippur, October 9, 2019

HALLE, Germany – The red-rimmed eyes of the congregants trickling into the Halle synagogue Friday evening said much to a reporter who speaks no Russian and only rudimentary German. In their 50s and 60s, most of the synagogue’s couple dozen regulars came to Germany from the former Soviet Union decades ago.

Their rabbi, Elisha Portnoy, is a young, Russian-speaking man who splits his time between Halle and another small community in a town nearby. As chance would have it, Portnoy was not in the synagogue when 27-year-old neo-Nazi gunman Stephan Balliet tried to break through the building’s security door Wednesday, as 70 or 80 worshipers packed the sanctuary for Yom Kippur prayers.

The door to the house of prayer is riddled with bullet holes from the shooter’s failed attempts to break through it and into the synagogue. With no police present on the Jewish holy day, the door’s endurance was the only thing that prevented a larger-scale tragedy. The frustrated gunman still managed to kill two people on the street, rocking the intimate city of roughly 240,000 located 170 kilometers (105 miles) southwest of Berlin, and shaking this small congregation — the only one serving a Jewish community of several hundred — to its core.

As Jewish supporters from Germany and around the world packed into the cramped sanctuary — designed to hold 100 at the very most — locals began to gather outside the synagogue’s walls. Some held candles; others placed flowers at a makeshift memorial. The sun was setting, signifying the beginning of Shabbat. 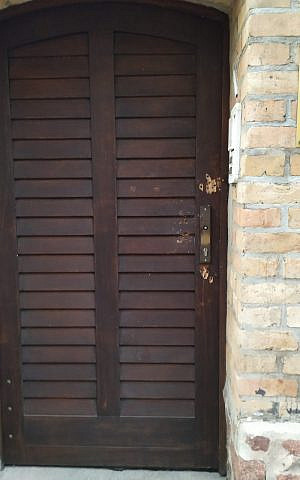 By the time Portnoy sent Rabbi Adam Scheier out to address the crowd, it had swelled into the thousands. Scheier is the rabbi of Congregation Shaar Hashomayim in Montreal, helped found the first Orthodox yeshiva in post-World War II Germany, and has been a friend and mentor to Portnoy for over 20 years.

“This is our answer. This is for the Jewish community, and all the world, who are looking to Halle to see what it means to respond to terror. And I wish everyone, the entire world, a Shabbat of peace, a Shabbat of healing, and a Shabbat of blessing,” Scheier told the crowd after reciting the Kiddush prayer.

Inside, Portnoy led the congregation in singing pre-Shabbat hymns.

‘Nobody wants to talk about it’

Earlier Friday, thousands of people gathered in the central Marktplatz square, blocking light rail service in the area. They flew Israeli flags, as well as anti-fascist ones, and carried banners with slogans condemning anti-Semitism.

One 19-year-old student at nearby Martin Luther University wore a green shirt emblazoned with the golden emblem of the Israel Defense Forces. He had gotten the shirt weeks ago, he said, in order to provoke conversation. He said the effort has been highly successful. 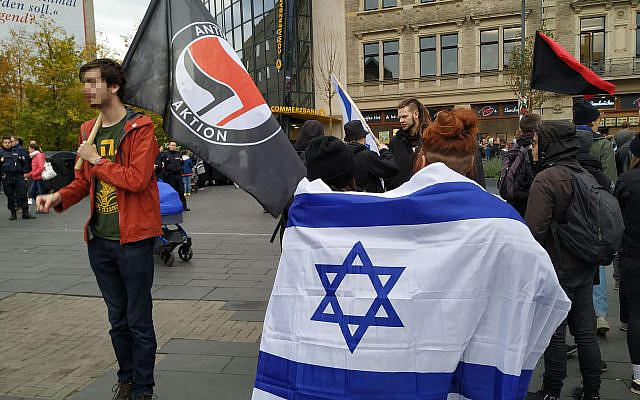 “Anti-Semitism is a growing problem that nobody wants to talk about,” said the student, who requested not to be named. “But it needs to be addressed, and now. Wearing this shirt has been a really effective way of getting people to talk about it.”

Asked to comment about the strong turnout at this event, he said that “it would be terrible if it were any other way.”

With Halle’s mayoral elections coming up on Sunday, there had been a political debate planned, but the three participating parties canceled it to make way for the rally, which focused on combating right-wing fascism and anti-Semitism. Two other political parties also suspended their campaigns in the wake of the shootings. The far-right Alternative for Germany party is not running a candidate in the election. 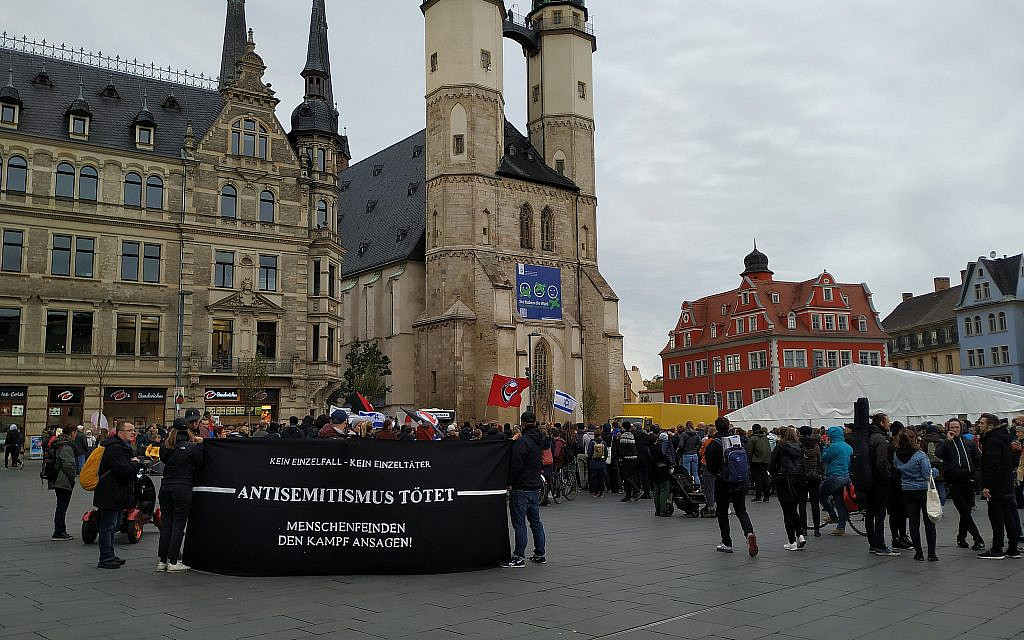 Wednesday’s far-right terror attack has struck a chord in the relatively progressive city, spurring a large-scale demonstration of solidarity on Friday that included the gathering of supporters in the city center, outside the synagogue, and in front of the kebab shop in which a 20-year-old painter was shot dead.

Not far from the city center protest, a lone far-right activist stood on top of a minivan ranting about government-sponsored left-wing terror to a thin crowd of bemused spectators. The police presence required to protect him rivaled that of the large, entirely peaceful gathering nearby. 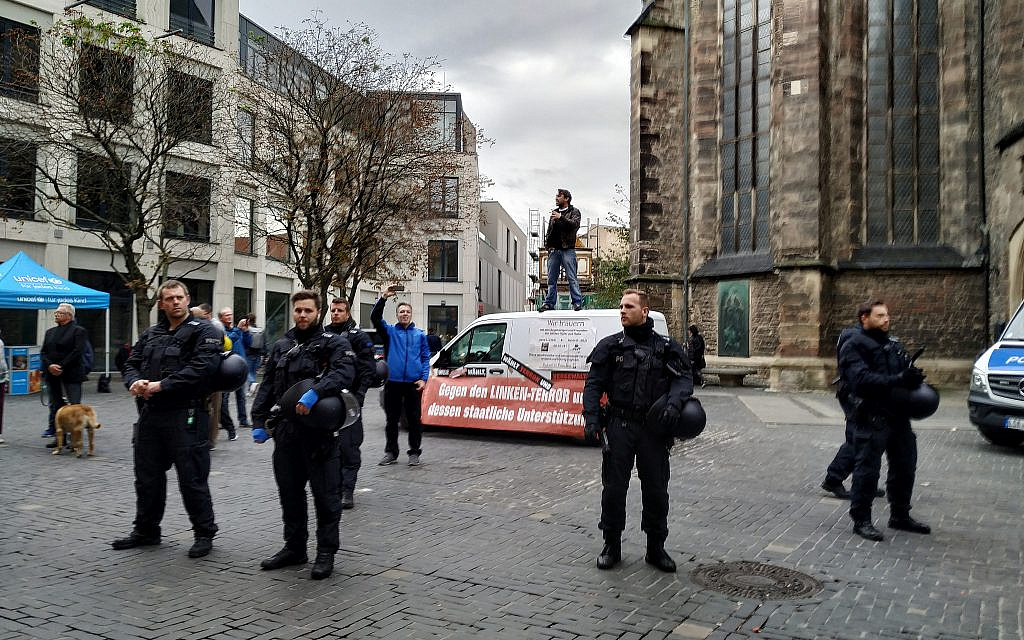 Not far from a mass demonstration against Wednesday’s synagogue shooting in Halle, Germany, a lone far-right activist gives a speech atop a van. His sign blames the shooting, committed by a self-described neo-Nazi, on government-sponsored left-wing terror, October 11, 2019. (Yaakov Schwartz/ Times of Israel)

‘We are between two flames’

“It’s funny,” said a 25-year-old teacher who asked not to be named. “I feel more Jewish now than ever before.”

She was among the 20 or so young Jews of Halle who turned up to the synagogue Friday night to help volunteer. They circulated among the worshipers holding trays from which they distributed cookies and small glasses of sweet wine.

With local news cameras rolling, the aging, Russian-speaking guard then swung the security door open, and the volunteers shared the refreshments with the crowd gathered in vigil outside.

During their off time while prayers were being conducted and speeches delivered, some of the volunteers hung out near the synagogue’s side door, smoking cigarettes and drinking shots of wine. 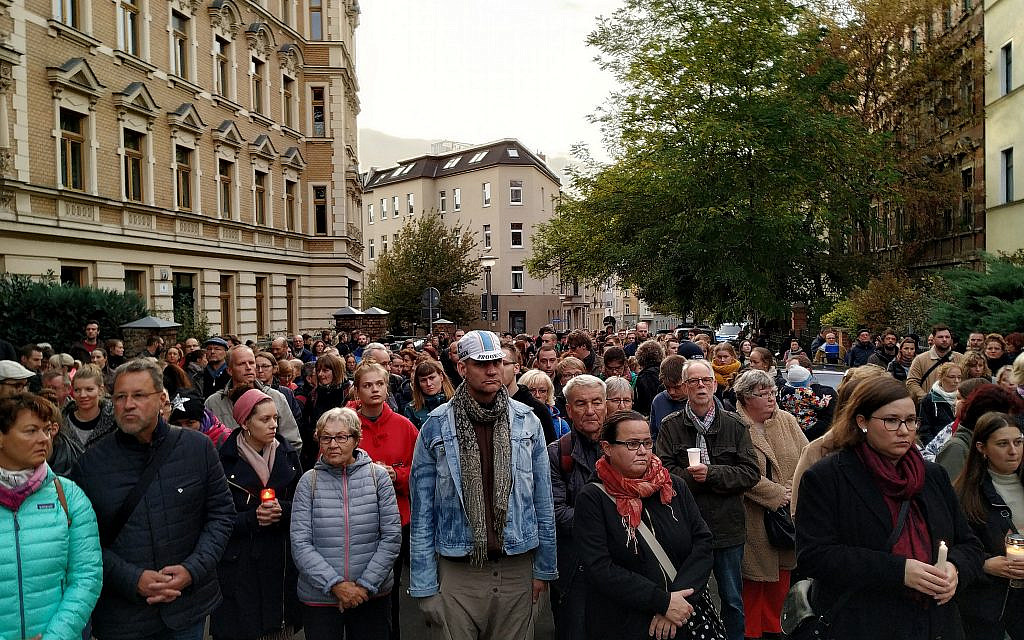 People gather in candle light vigil in front of the synagogue in Halle, Germany, October 11, 2019. (Yaakov Schwartz/ Times of Israel)

Along with the teacher was her older brother, who coordinated and helped keep things running smoothly. The two said that they rarely come to synagogue, but participate in events geared toward Jewish young adults, often sponsored by the Jewish Welfare Board or the Central Council of Jews in Germany.

They said that their parents had not given them much of a religious or cultural education growing up, believing that it would hurt them to stand out from mainstream German society. Still, the young volunteers said, at around the age of 18 they independently began gravitating toward Judaism, and started to attend synagogue. While not particularly religious now, they both said they value Jewish culture and community.

“I always had a very mixed feeling,” the teacher said. “I was born here in Germany, but my parents are Russian and I do feel like an immigrant. And then there’s my Jewish side, which for a long time was the smallest part of me.” 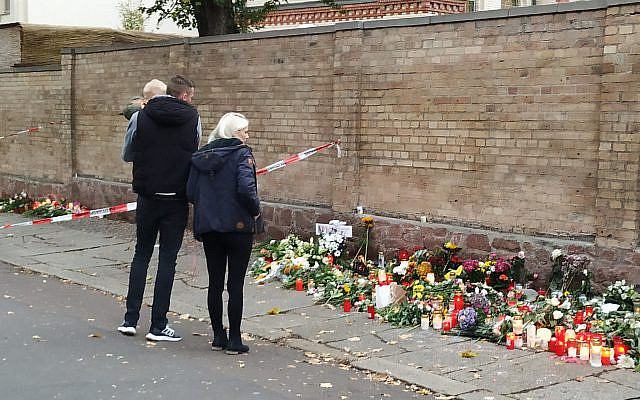 People stand in front of the synagogue in Halle, Germany, where a memorial has been placed for the victims of Wednesday’s shooting. October 11, 2019. (Yaakov Schwartz/ Times of Israel)

Neither sibling was at the synagogue Wednesday during the attack – though they’d considered coming. Still, rather than being discouraged by the violent display of anti-Semitism, they saw a silver lining in the reaction of their German counterparts.

“Maybe it’s because the people killed were regular Germans and not Jewish,” said the teacher, “but this has really brought people together. I feel like now there’s no real difference between Jewish and non-Jewish people here, because everyone feels like this terror affects them personally.”

Asked whether the government could solve the problem of anti-Semitic violence in Germany, she seemed confident that it could and would.

“Of course,” she said. “From now on, they’re going to provide us with more security.” 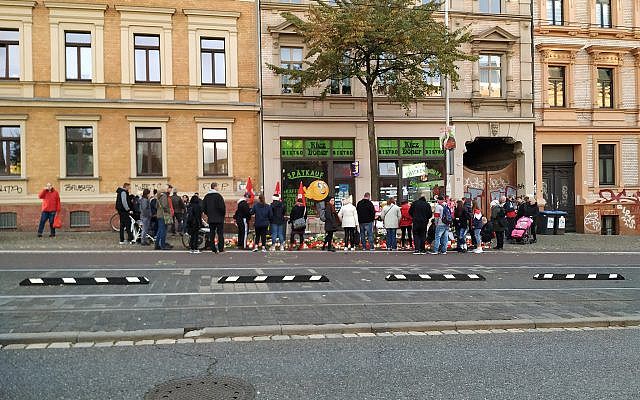 People stand in front of the small restaurant in Halle, Germany, where a man was murdered during Wednesday’s synagogue shooting. October 11, 2019. (Yaakov Schwartz/ Times of Israel)

Experience behind the Iron Curtain colors the opinion of the synagogue’s regulars, who are far from optimistic.

“We’re standing between two flames,” said the synagogue’s gabbai (warden), 59-year-old Josef Levin, who came to Germany from Ukraine in 2004. “On the one side we have the neo-fascists, and on the other, we have immigrants coming from Syria and other places in the Middle East, who hate us just as much. And we’re stuck in the middle, burning.”

Hundreds of people were still standing on the street in front of the synagogue holding candles by the time prayers finished. Night had descended long before. As the worshipers stepped out, the German supporters broke into a Hebrew song.

By Saturday morning, the crowds at the synagogue had gone. Not counting the brown-robed monk who attended the services in a show of solidarity, and this visiting reporter, the congregation still had more than the minimum for a prayer quorum of 10 Jewish men – but not by much.

It was difficult to imagine who would want to hurt the simple people who barely filled the faded wooden pews. As they performed the call and response of the prayers, their sincerity made them appear all the more vulnerable. Most knew the liturgy only by rote. When this reporter asked a neighboring congregant which Torah portion was being read this week, he was directed to the blessing for the Torah in the prayer book. 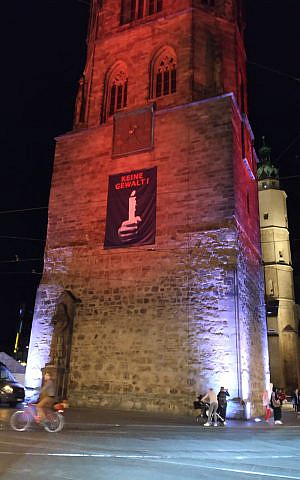 Despite the trauma inflicted on them by the attack three days earlier, these worshipers were back in their usual spots this Shabbat morning.

Once after the Torah reading and again at a light lunch after prayers had concluded, Scheier addressed the group. Quoting this week’s Torah portion (Ha’Azinu), he said that generations do indeed change, that they need not fear another Holocaust, and that the show of support outside bore testament to the good intentions of the vast majority of their neighbors.

As Scheier spoke, the security guard rose from his place next to the synagogue entrance, went outside, and opened the heavy wooden door. Looking out, a reporter could see two forensics experts with gloves and surgical masks come into the courtyard and examine the bullet holes in the door. After a few minutes, they left.

Privately, Scheier told The Times of Israel that he was confident in the future of German Jewry, adding that this attack was a symptom of a global trend rather than a local one, and that the community was in no greater danger than others worldwide.

In the now quiet sanctuary, it was easier to take in the surroundings. The room was familiar, though this reporter had never been here before. It was beautiful despite the faded wooden benches and dingy brown tile floor. A pristine curtain, white in honor of the High Holy days, adorned the ark. 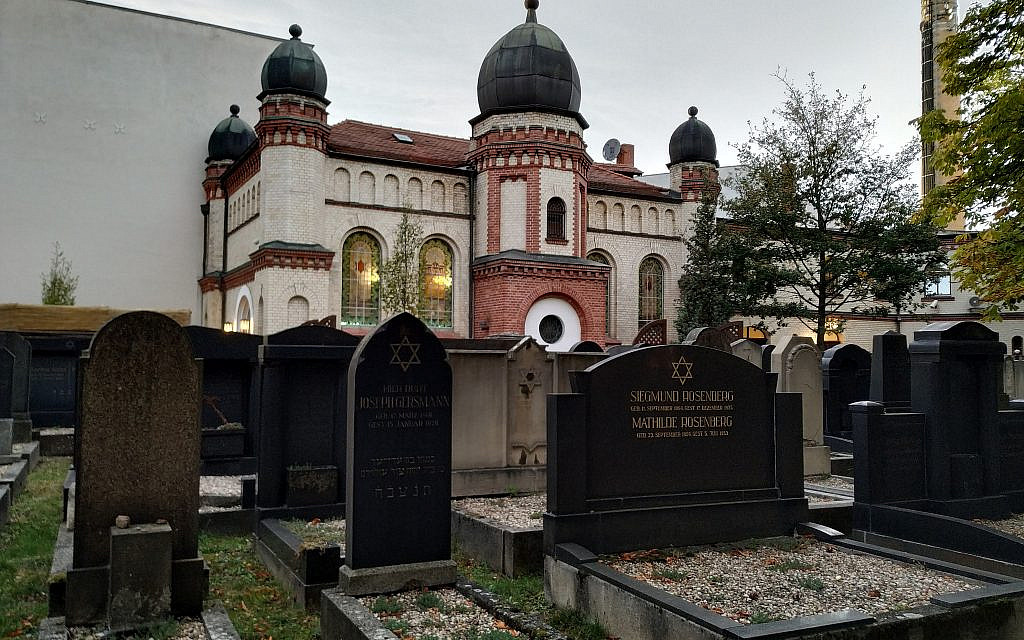 On the back wall, a painted memorial remembered the six million Jews killed in the Holocaust. Below it, a plaque honored several dozen local Jews who lost their lives serving Germany in World War I.

To the left of the ark was a large stained glass window. On it were the first words to the Kol Nidre prayer, sung from generation to generation at the beginning of Yom Kippur.

Greetings from the Vaccination Nation

One tiny country has led the world in COVID vaccination. If Israel’s achievement makes you proud, there’s something you should know. Huge audiences have flocked to The Times of Israel recently from countries where Israel normally makes the news only because of its conflicts.

They’ve been coming here to read a very different kind of article. We’ve been the go-to site for everyone intrigued by the success story of the “Vaccination Nation.”

As ToI's Health and Science correspondent, I’ve written much of this coverage - and it’s been exhilarating to see its impact. Our journalism has inspired many articles in media outlets worldwide. I know this because international journalists have often contacted me for input.

Your support, through The Times of Israel Community, helps us to continue providing surprising, impressive stories from this small state to readers around the world. Will you join our Community today?