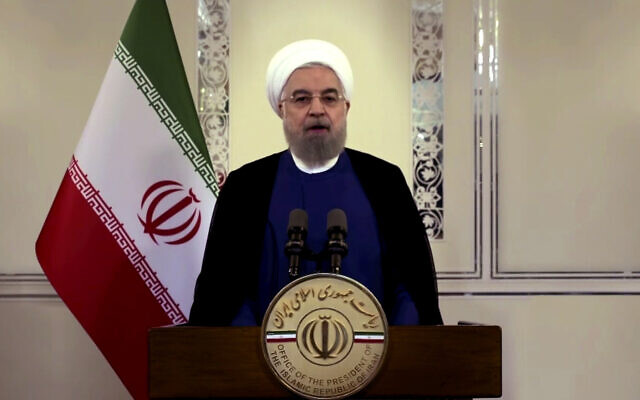 Iranian President Hassan Rouhani speaking in a pre-recorded message played during the 75th session of the United Nations General Assembly, at UN headquarters in New York, September 22, 2020. (UNTV via AP)

Iranian President Hassan Rouhani vowed Tuesday that the next US leader must accept Tehran’s demands, ruling out compromise as Donald Trump vies for reelection.

“We are not a bargaining chip in US elections and domestic policy,” Rouhani said in a virtual address to the UN General Assembly. “Any US administration after the upcoming elections will have no choice but to surrender to the resilience of the Iranian nation.”

Tensions have soared between Iran and the United States under Trump, who pulled out of a nuclear accord negotiated by his predecessor Barack Obama and slapped sweeping sanctions on the country.

Rouhani delivered a defiant and fiery speech even as his nation grapples with the Middle East’s worst coronavirus outbreak and a weakened economy.

He spoke in a pre-recorded speech to the virtual summit just days after Iran’s currency plunged to its lowest levels ever to the US dollar due to crippling US sanctions imposed by Trump, who pulled the US out of Iran’s nuclear deal with world powers in 2018. The accord had been signed by the Obama administration. The sanctions effectively bar Iran from selling its oil globally.

“The United States can impose neither negotiations nor war on us,” Rouhani said, before adding: “Life is hard under sanctions. However, harder is life without independence.”

Rouhani also compared his country’s plight with that of George Floyd, the Black American who died after a white police officer in Minneapolis pinned him to the ground by pressing a knee into his neck. Floyd’s death sparked nationwide protests in support of Black lives.

Calling it “reminiscent of our own experience,” he said: “We instantly recognize the feet kneeling on the neck as the feet of arrogance on the neck of independent nations.”

Rouhani said Iran “has paid a similar high price” in its quest for freedom and liberation from domination. He insisted his nation “does not deserve sanctions” and described the US as “a terrorist and interventionist outsider” before referring to the 1953 US-backed coup that cemented the control of the shah in Iran, which ultimately pushed the country toward its Islamic Revolution and hostility with the West.

This week, the White House doubled down on its maximum pressure campaign against the Islamic Republic with an executive order to enforce all United Nations sanctions on Iran because Tehran is not complying with the nuclear deal — a move that most of the rest of the world rejects as illegal. Few UN member states believe the US has the legal standing to restore the sanctions because Trump withdrew from the nuclear agreement.

Rouhani accused the US of creating Islamic State, and said US claims that Iran is seeking nuclear weapons were “without any foundation.”

He also hailed Iran’s role in standing “with the people and government of Lebanon against Zionist occupiers, domestic warmongers and foreign plotters” and said it his regime “never ignored occupation, genocide, forced displacement and racism in Palestine.”

In an implied rebuke of Arab countries warming their ties with Israel — including the UAE and Bahrain, which last week signed the Abraham Accords at the White House — he said Iran “never made a deal over the Holy Quds and the fundamental rights of the Palestinian people.” 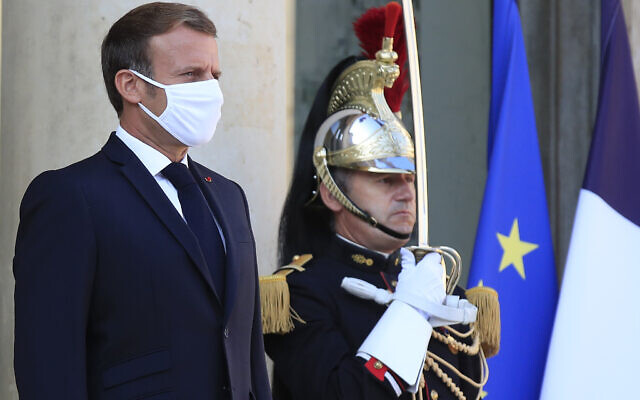 French President Emmanuel Macron said Tuesday that Europe would not compromise with the US over Washington’s move to reactivate sanctions on Iran, warning the snapback could undermine the UN Security Council and increase Middle East tensions.

Macron assailed the “maximum pressure” policy, saying it had failed to curb Tehran’s interference in the region or ensure it would not acquire a nuclear weapon.

“We will not compromise on the activation of a mechanism that the United States is not in a position to activate on its own after leaving the agreement,” Macron told the UN General Assembly’s 75th session by video from Paris.

“This would undermine the unity of the Security Council and the integrity of its decisions, and it would run the risk of further aggravating tensions in the region,” he warned.

In a nod to Washington, Macron said additional frameworks were needed for effectively dealing with the Iranian nuclear program, adding there needed to be a “capacity to complete” the 2015 accord known as the Joint Comprehensive Plan of Action.

These would ensure that “we will provide responses to Iran’s ballistic activity, but also to its destabilization in the region.”

Macron insisted that France, along with its European allies Britain and Germany, would keep up its demand for “full implementation” of the Iran nuclear deal. 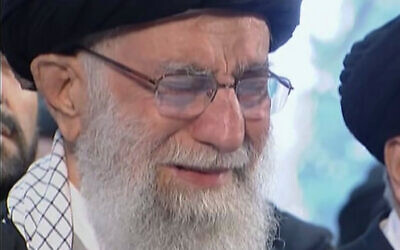 Screen capture from video shows Iranian supreme leader Ayatollah Ali Khamenei openly weeping as he leads a prayer over the coffin of Gen. Qassem Soleimani, who was killed in Iraq in a US drone strike, in Tehran, Iran, January 6, 2020. (Iran Press TV via AP)

He added that they would “not accept the violations committed by Iran,” which has ramped up its nuclear activity in response to the US withdrawal.

Tensions have run dangerously high this year between Tehran and Washington following a US strike in January that killed Iranian Revolutionary Guard general Qassem Soleimani in Baghdad, prompting Tehran to retaliate with a ballistic missile strike on Iraqi bases housing American troops. The powerful commander was close to Iran’s supreme leader Ayatollah Ali Khamenei, who openly wept at his funeral.

Rouhani mentioned the commander briefly in his speech, referring to him as an “assassinated hero.”

Trump, who faces a stiff reelection battle in November, has ramped up pressure on Iran since taking office and has increased US military presence in the Gulf as a centerpiece of his Mideast foreign policy.

“We are not a bargaining chip in US elections and domestic policy,” Rouhani said.

In his speech earlier Tuesday at the General Assembly, Trump called Iran “the world’s leading state sponsor of terror” and underlined the US killing of Soleimani, boasting, “We withdrew from the terrible Iran nuclear deal and imposed crippling sanctions.”