In Haim Watzman’s new Necessary Story, a woman finds friendship, but not her own, on the fast train to Jerusalem

The two young men glance at me in concert but immediately turn back to their conversation. I position my overstuffed shopping cart in front of my knees, and arrange my skirt neatly, so that no one can complain that I am blocking the place next to me. I’m facing the other side of the fast train to Jerusalem, which means I’m looking directly at the two young men. They have the seats on the other side, which face each other over a small table, in the alcove that each car has just to the right of the door when you board. If you turn left, you have to haul your cart either up or down half a flight of stairs to find a seat and then the cart ends up blocking the aisle and people yell at you.

Both of the young men have kipot with the usual pattern, solid color inside with a crocheted design along the margins. The one on the left has unruly brown hair that has begun, very slightly, to thin, and a scraggly beard. He wears a brown sweater with patches on the elbow over an orange t-shirt, on top of jeans. I decide to call him Gilad.

The one facing him, his face in the direction of Jerusalem, has a clean-shaven baby face, close-cut black hair, and is wearing a button-up lavender shirt over dark pants. I decide to call him Kfir.

I take a bite out of a cucumber from my bag. It tastes so much better than the cucumbers you get in Mahane Yehuda. It always does. So maybe I’m crazy to go all the way to Tel Aviv to do my shopping. What can I say, maybe the cucumbers start to sour just slightly when trucks haul them up the hills to sell in Jerusalem. They seem to get to Shuk Hacarmel less than an hour after being picked. Maybe it’s just that my taste for cucumbers was set in early childhood, that it’s the cucumber I first ate as a girl, one my father brought home to Yad Eliahu from Hacarmel, that became the gold standard for me. Anyway, now with the fast train it’s no problem at all. I can set out for Tel Aviv after my post-lunch nap and be back to my place in Baka in time to make a fresh vegetable salad for dinner. 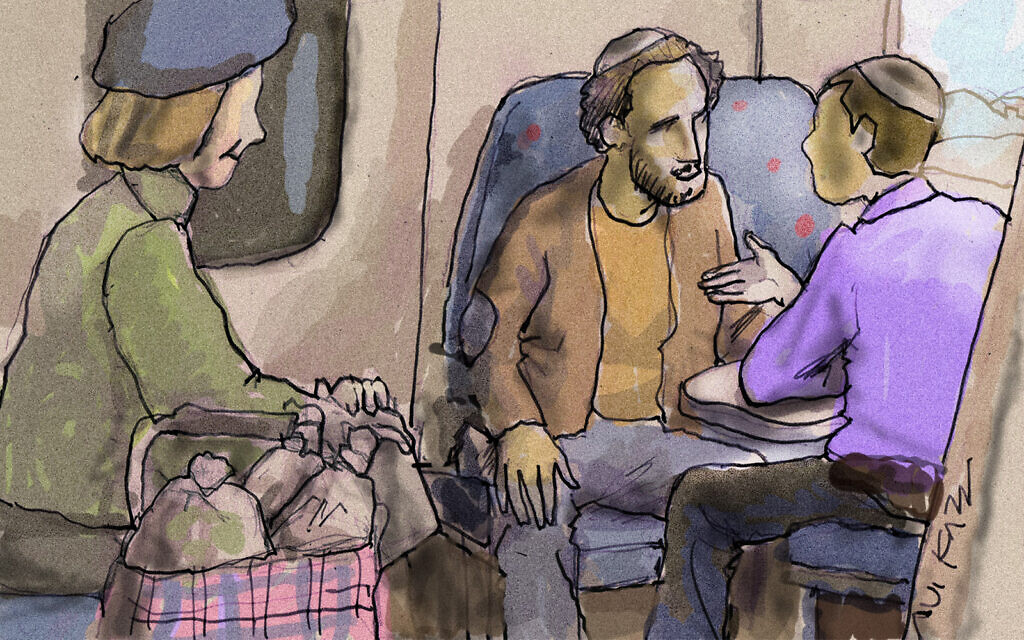 Illustration (above and top) by Avi Katz

Gilad is surprised to see his old friend from the Givati Brigade on the train. “You have to drag yourself to Tel Aviv every day?” he says, wide-eyed. I’m guessing that Gilad is a musician, or maybe a graphic artist, who has to go to the big city every so often, a few times a month, for a project, but really tries to avoid it. Kfir explains to Gilad that he just started a new job — I’m guessing it’s in insurance, or maybe marketing — and that the trip is really not a problem with the fast train. Kfir places his hands on the table and looks his friend in the eye as if they’re about to close a deal. “But as soon as I learn the ropes and my boss doesn’t need me there to explain things to me, I’ll be able to work part of the week from home,” he says.

Gilad leans back in his seat, as if he’s thinking the deal over. He sticks both feet out into the aisle. “Working from home is great,” he says. “Although since Asi was born it’s a little crazy and I’ve been thinking of renting a studio.”

Kfir springs up halfway and reaches over to give his friend a chapha on the shoulder. “You have a kid! I didn’t even know you got married! I guess you didn’t bother sending me an invitation.”

Gilad’s right hand reaches up and massages his kipah. “You’ll get one. We just haven’t gotten around to that part yet.”

Kfir grins. “I remember you telling me after that night patrol in Tubas, remember, when we got ambushed and a bullet made a neat hole in my pants but only scratched my leg, that you didn’t see why you couldn’t keep Shabbat and be the same apikoros you always were.”

Friendship is a mysterious thing, a miracle really. It seems to me the gift of a surfeit of grace, a gift Adam would not even have known to ask of God because he could not have known, alone in Eden, that he might like it. When you think about it, we could all easily function on our own, interacting with other people, just handing the hawker in the market the bag of cucumbers for him to weigh and then the coins to pay him. Perhaps you might ask about the freshness of the tomatoes or, if it’s a stand you buy at frequently and where you know the people, inquire about the hawker’s family. But that requires no intimacy, just interaction. It’s not like Gilad and Kfir.

Kfir draws his phone from his pocket, draws a design on it, and holds it up to Gilad. “Liat is two and Avital six months.” There’s deep contentment in his voice.

“Gever!” Gilad’s laugh is as sweet and as simple as a fresh cucumber. “You don’t waste time.”

Kfir eyes me and I look quickly away. “Orly wants five,” he says. “I don’t know about that. Two is already a handful.”

We were five in that tiny three-room apartment in Yad Eliyahu. We’re not all that close, my brothers and sisters with me. Each of us long ago got caught up in our own lives. Maybe after being five in a room we needed some distance. The others are all grandparents now. We see each other at functions. Sometimes Shulamit will call, if she’s in Jerusalem, to suggest we get together. I’m not always in the mood. She has grandchildren I have never met.

Kfir looks out the window, but we’re going through a tunnel and there’s not anything to see. There’s a pause in their conversation but then Gilad says, softly, “I’m glad to hear because I know you and Orly were, well, I remember last time we talked…”

Kfir takes a deep breath. “Yeah. That wasn’t easy. But we worked through it.”

Gilad sits up, puts his hands on the table, fingers interlaced, and looks at his friend. There’s admiration and wonder in his gaze. “You must really love each other, then, to be able to do that.” Kfir, still looking out the window, nods.

Last week I called the two young men in those two seats Michael and Oren. They were pals from Leyada, the high school just by the Hebrew University campus in Givat Ram. It took a while, but just after the stop at the airport Michael admitted that he’d been fired from his job managing a clothing store and had been unemployed for three months. Oren didn’t blink, just took out his checkbook and scribbled a sum that brought tears to Michael’s eyes. Two weeks ago they were Suha and Yasmin. I couldn’t understand what they were saying because they spoke in Arabic. I don’t think they even knew each other before getting on the train, because when the train left Tel Aviv Suha was reading a novel and after a few minutes Yasmin asked her about it and they were soon in serious conversation, each listening to the other with full attention. Toward the end of the ride they tapped each other’s numbers into their phones.

I popped the last piece of cucumber in to my mouth. The train pulled into the station. All three of us stood up. Gilad smiled at me; Kfir frowned. Gilad motioned for me to go first. Kfir helped me get the cart down to the platform. They walked off toward the escalator, deep in conversation. I shivered. Tel Aviv was warm from the sun; Jerusalem is overcast and cold. The fast train makes the trip so much easier. But it’s much too short.