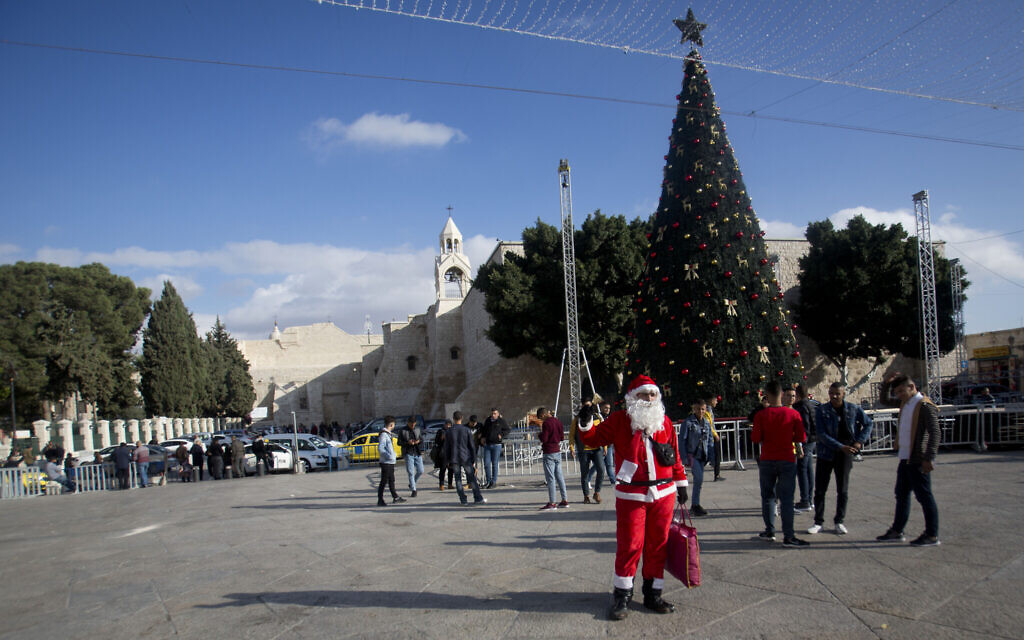 In this December 5, 2019, photo, a Palestinian wearing a Santa Claus costumes welcomes Christian visitors outside the Church of the Nativity, traditionally believed by Christians to be the birthplace of Jesus Christ, in the West Bank city of Bethlehem. (AP Photo/Majdi Mohammed)

For decades, the people of Bethlehem have watched tour buses drive up to the Church of the Nativity, disgorge their passengers for a few hours at the traditional birthplace of Jesus, and then return to Israel.

But in recent years a new form of tourism has taken root, focused on the West Bank town’s Palestinian residents, their culture and history and their struggles.

As pilgrims descend on Bethlehem this Christmas, they have the option of staying in restored centuries-old guesthouses, taking food tours of local markets, and perusing the dystopian art in and around a hotel designed by the British graffiti artist Banksy.

The centerpiece of tourism, and the focus of Christmas celebrations in the coming weeks, is the 6th-century Church of the Nativity, built on the site where Jesus is believed to have been born in a manger. Extensive renovations in recent years have saved the roof from collapse and revealed colorful wall mosaics depicting angels and saints.

Earlier this month, the Vatican returned a small part of what Christians believe to be the original manger, which was sent to Rome as a gift to the pope in the 7th century. The thumb-sized relic, displayed in an ornate silver case, can be seen in a chapel adjoining the church. 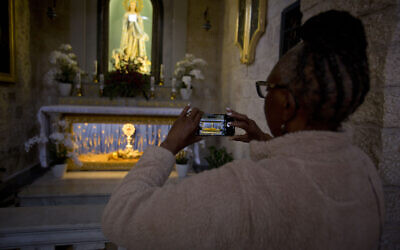 In this Dec. 5, 2019, photo, a visitor takes a picture of a wooden relic believed to be from Jesus’ manger inside the Church of the Nativity, traditionally believed by Christians to be the birthplace of Jesus Christ, in the West Bank city of Bethlehem (AP Photo/Majdi Mohammed)

In Manger Square, just outside the church, a massive Christmas tree has been set up and festivities are planned in the coming weeks as various denominations hold staggered Christmas celebrations. On January 7, Bethlehem will host an international Santa convention.

Tourism has suffered in the past during outbreaks of violence between Israel and the Palestinians. But the Palestinian Tourism Ministry expects 3.5 million visitors to Bethlehem in 2019, up from 3 million the previous year, and many think there is still room for growth.

“The general situation in Palestine and the Holy Land is that there is very good security, better than most countries in the world, and so the people are visiting,” said Elias al-Arja, chairman of the local hotel association.

He noted that while the Holy Land includes the most important sites in Christianity, including the places where tradition says Christ was born, where he grew up, was crucified and resurrected, it attracts far fewer visitors than the Vatican. “We have the opportunity to draw more people,” he said.

Religious tourism is a boon for the local economy, but many Palestinians feel the city’s modern residents are largely ignored. 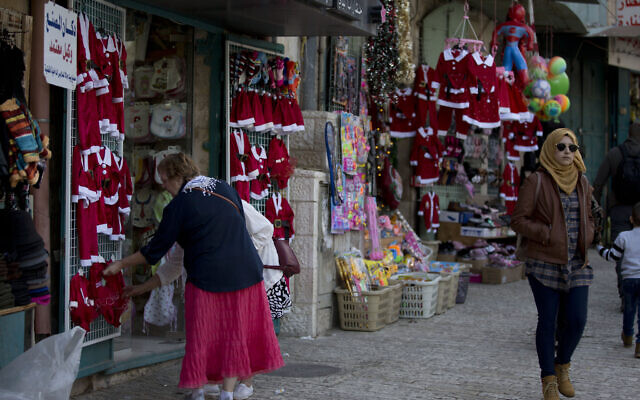 In this Dec. 5, 2019, photo, visitors shop near the Church of the Nativity, traditionally believed by Christians to be the birthplace of Jesus Christ, in the West Bank city of Bethlehem (AP Photo/Majdi Mohammed)

Israel captured the West Bank, along with East Jerusalem and the Gaza Strip, in the 1967 Six Day War. The Palestinians view the territories as part of their national homeland and hope to one day establish an independent state.

Visitors traveling to Bethlehem pass through a sprawling Israeli checkpoint and then drive along the security barrier, which Israel began building during the second Palestinian intifada, or uprising, in the early 2000s. Israel says the barrier is needed to prevent attacks, but the Palestinians view it as a land grab because its route places almost 10 percent of the West Bank on the Israeli side. Bethlehem itself is partly surrounded by the barrier — a wall — and also by a string of Jewish settlements.

The town’s predicament is on vivid display in and around the Walled-Off Hotel, which was designed by Banksy and opened in 2017. The hotel looks out on the wall, which itself is covered with artwork, graffiti and museum panels. Inside, a number of Banksy pieces are depicted in a haunting lobby, which this time of year is dimly lit with Christmas lights. 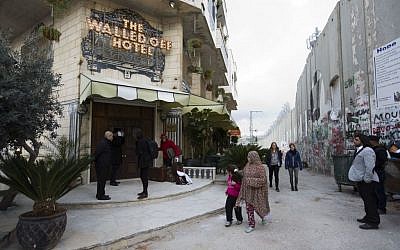 People pass by ‘The Walled Off Hotel’ and the Israeli security barrier in the West Bank city of Bethlehem, March 3, 2017. (AP Photo/Dusan Vranic)

The hotel offers weekly performances by local musicians and daily tours of a nearby Palestinian refugee camp. Tours of Banksy’s public artwork elsewhere in the town can be organized on request.

A different form of alternative tourism, conceived by Palestinians themselves, can be found in the city center, just a few hundred meters (yards) from the church. There the municipality, with Italian aid, has restored an 18th-century guesthouse and rented it out to Fadi Kattan, a French Palestinian chef.

The Hosh Al-Syrian Guesthouse includes 12 tastefully furnished rooms ranging from $80 to 150 a night. At its Fawda Restaurant — Arabic for chaos — Kattan uses local ingredients to cook up traditional Palestinian cuisine with a modern twist.

Kattan is especially keen to promote Palestinian cuisine, which he says has been appropriated by Israeli chefs and food writers. As with nearly everything else having to do with the Middle East conflict, there are two sides: Israeli cuisine owes much to Jewish immigrants from ancient communities across the Middle East and North Africa.

The guesthouse partners with a local group known as Farayek to offer food tours in which visitors wander through the local market, meeting farmers, butchers and bakers before having lunch at the guesthouse. Another program includes cooking classes taught by a Palestinian grandmother.

When the guesthouse opened in 2014, the average stay was one night, but now it has risen to three and a half, with steady occupancy throughout the low season, Kattan said. 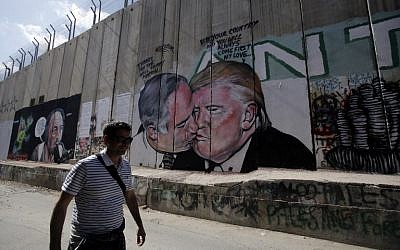 A handful of other restored guesthouses have also opened in recent years, including Dar al-Majus, Arabic for House of the Maji, named for the three kings said to have visited the manger after Christ was born.

The guesthouse is part of a wider initiative by the Franciscan Custody of the Holy Land and a local association to support the Christian community. Bethlehem’s Christian community, like others across the Middle East, has dramatically dwindled in recent decades as Christians have fled war and conflict or sought better economic opportunities abroad.

A local family living next to the guesthouse cooks breakfast and traditional meals for guests, and the guesthouse employs members of another two families. The guesthouse mostly supplies itself from the local market, and there are plans to expand to another restored house in the old quarter next year.

“Each season is more active and more organized and more attractive for the local community in Palestine and for the tourists,” he said.