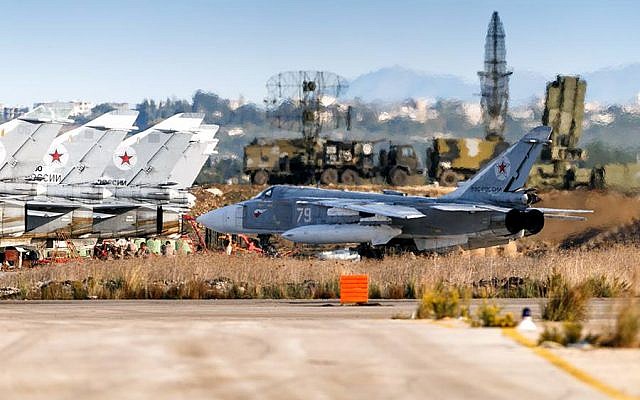 Illustrative: A Russian Su-24 fighter jet taxis at an air base near Latakia, Syria, with an alleged S-400 air defense battery in the background. (Russian Defense Ministry Facebook)

Moscow has reportedly deployed a sophisticated anti-aircraft system near the Syrian port city of Latakia capable of striking aircraft as far distant as Tel Aviv, the Daily Mail reported Friday.

The paper said that photos released by the Russian Defense Ministry appear to show installations at the Russian air base near Latakia belonging to the S-400 Air Defense System, known to NATO as SA-21 “Growler.”

The photo of the radar installation in question, posted on the Defense Ministry Facebook page, is blurred by the exhaust of a Russian military aircraft. It is part of a series of photographs posted from a recent media visit to the Latakia air base.

The report could not be independently confirmed.

Certain versions of the missiles used in the S-400 Air Defense System have a maximum range of 400 kilometers (250 miles), placing much of northern and central Israel, as well as Cyprus, Lebanon and southern Turkey, in their range. The missile system is considered among the most advanced in the world, capable of targeting F-15, F-16 and potentially the sophisticated F-22 Raptor fighter jets.

It wasn’t immediately clear what kinds of surface-to-air missiles Russia has deployed to Latakia.

The report came out as Russia increased its military presence in Syria as part of its air war to help bolster its ally, Syrian President Bashar Assad, and carry out strikes against Syrian rebel groups, including the Islamic State.

Last month, Israel and Russia arranged to coordinate their respective activities in Syrian airspace to prevent unwanted conflict and miscommunication. Since then, Israel has reportedly carried out two airstrikes on targets in Syria, the most recent one an alleged arms shipment earlier this week.

Earlier this week, Iran said it would receive most of the previous generation S-300 air defense missile systems it ordered from Russia by the end of the year, despite vocal opposition to the move by Israel.

“We signed a contract with Russia. It is being done. We will acquire a large portion of the systems by the end of this year,” Defense Minister Hossein Dehghan told state television late Tuesday.

He said Iranian troops were being trained in Russia to operate the surface-to-air missile systems.

This week, the state-run Russian Technologies corporation Rostec announced the signing of a delivery contract in Tehran for S-300 missiles.

Russia will provide Iran with a “modernized and updated” version of the missile systems, following up on an initial contract signed in 2007, Rostec Director General Sergey Chemezov said in a statement.

One of the most sophisticated anti-aircraft weapons in the world, the S-300 is capable of tracking multiple planes at once, and some versions have an interception range of up to 200 kilometers. 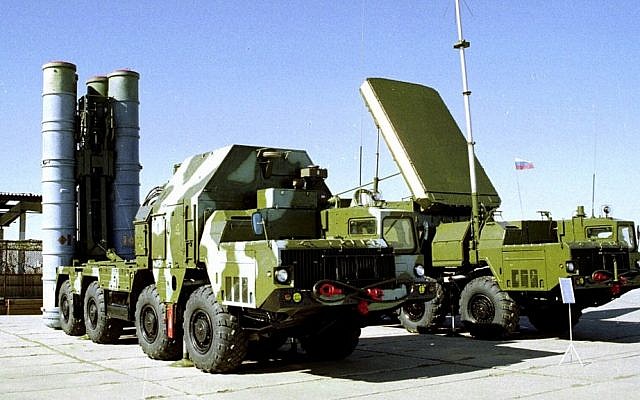 Israel has long sought to block the sale to Iran of the S-300 system, which analysts say could impede a potential Israeli strike on Tehran’s nuclear facilities. Other officials have expressed concern that the systems could reach Syria and Hezbollah, diluting Israel’s regional air supremacy.

Russia initially agreed to sell the system to Iran in 2007 but then balked, saying at the time it was complying with a United Nations arms embargo on the Islamic Republic.

In April, shortly after the announcement of the Lausanne outline for the nuclear deal between world powers and Iran, Russia announced it was lifting the ban on selling the advanced missile defense system to Iran, over American and Israeli objections.

In August, Iran and Russia announced that the system would be delivered by the end of the year, with Russian Deputy Foreign Minister Mikhail Bogdanov saying at the time that “just technical details” remained to be agreed upon.

AFP contributed to this report.