Main image by Carl DE SOUZA / AFP, shows smoke from a two-kilometer-long stretch of fire billowing from the Amazon rainforest about 65 km from Porto Velho, in the state of Rondonia, in northern Brazil, on August 23, 2019.

What must a country do when one of its allies or trading partners commits immoral acts? The rules of realpolitik ostensibly dictate maintaining diplomatic silence, or, at most, dishing just a dollop of mealy-mouthed criticism. Ideology and values, goes the thinking, mustn’t be allowed to interfere with practical interests. But some circumstances call for intervention in the business of a wayward friend.

Such is the case right now, as the Amazon forest burns under the unscrupulous rule of Brazilian President Jair Bolsonaro. For the past three weeks, huge chunks of this climate-critical forest have been on fire in the northern part of Brazil, the world’s fifth largest country by both area and population.

The blaze is visible from space.

Brazil’s National Institute for Space Research has presented satellite data showing that forest fires in the region have increased by 85 percent compared with the same period last year. The first two weeks of July saw 1,000 square kilometers (400 square miles) of forest go up in smoke, 68% more than during all of July 2018. 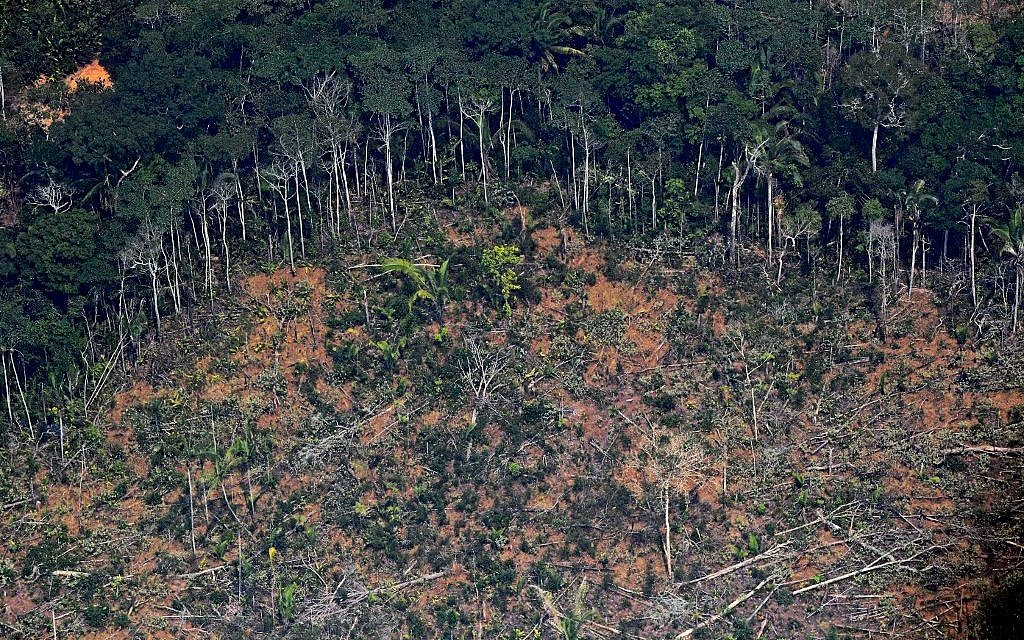 Aerial picture showing a deforested piece of land in the Amazon rainforest near an area affected by fires, about 65 km from Porto Velho, in the state of Rondonia, in northern Brazil, on August 23, 2019.(CARL DE SOUZA / AFP)

On Thursday, the institute reported nearly 2,500 new fires in the previous two days. (Its director quit in early August after Bolsonaro personally attacked him and described the reports as lies.)

The Amazon rain forests — 60% of which are located in Brazil — supply a fifth of planet earth’s oxygen.

Video clips and photos of the flames, the scorched earth aftermath and the countless animals burned or suffocated to death are racing around on social media, accompanied by ordinary people’s comments of horror and concern. 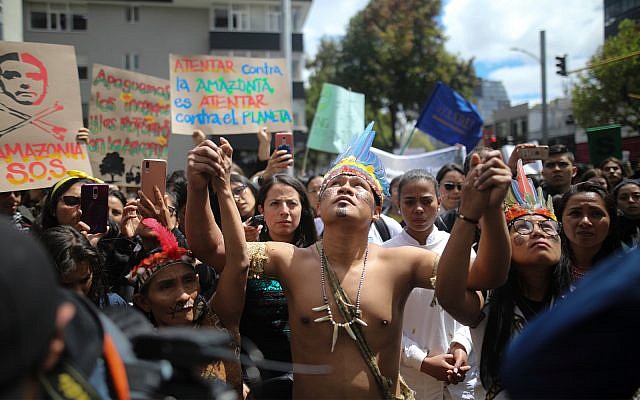 Bolsonaro, a right-wing, populist climate change skeptic who has worked hard to reverse measures to reduce deforestation in his country, has meanwhile resorted to apparently baseless explanations, in the style of his hero, US President Donald Trump, first blaming the annual dry season, then claiming unspecified NGOs have ignited the fires to tarnish his government’s standing, and only lately conceding that maybe “a few” farmers have been responsible for slash and burn practices to clear land for logging or cattle farming.

So far, the only political leader to metaphorically bang on the table has been Emmanuel Macron. The French president has called, with the more recent backing of German Chancellor Angela Merkel, for the issue to be discussed at the upcoming meeting of the G7 — a proposal Bolsonaro rejected as illegitimate intervention in his country’s internal affairs that he said showed a “misplaced colonial mindset.”

Thursday, Macron upped the ante when he and Ireland’s Prime Minister Leo Varadkar warned that they would not ratify a massive trade deal with South America unless Brazil took genuine measures to extinguish the fires. Norway and the UK have said they will keep back $60 million in cash promised to advance sustainability in Brazil’s forests.

Macron is right to take a clear stand and work to turn the screws on Bolsonera. Other leaders should follow his example, even those who count themselves as Bolsonaro’s political buddies, including our own Prime Minister Benjamin Netanyahu. 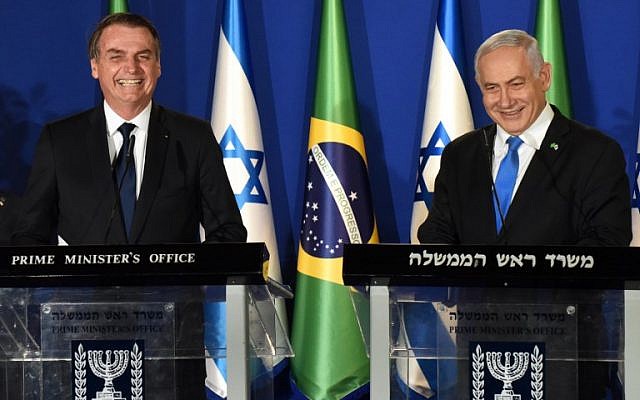 Netanyahu, who most recently put realpolitik above the right thing to do when he failed to condemn President Trump’s scorning of Jewish Democrats as disloyal, has so far also kept mum on what is emerging as an environmental catastrophe of worldwide proportions.

Brazil is a long way both from Europe and Israel — it is closer to the US — but there’s no chance of intervention from Trump, himself a climate change denier. Nevertheless, the fires are very much the business of us all. The issue simply transcends sovereign boundaries as well as the traditional politics of Right and Left. 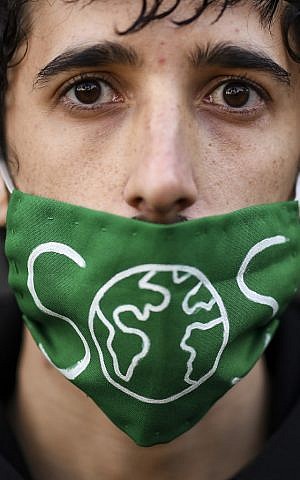 An activist poses as he demonstrates during a protest against the government of Brazilian President Jair Bolsonaro over the fires in the Amazon rainforest, in front of Brazil’s Embassy in Buenos Aires, Argentina, on August 23, 2019. (RONALDO SCHEMIDT / AFP)

The Amazon rain forests — 60% of which are located in Brazil — supply a fifth of planet earth’s oxygen. This is a byproduct of photosynthesis by which plants absorb (and store) atmospheric CO2 to produce what is the basis of the food consumed by every one of us.

The amount of carbon dioxide being released into the atmosphere by the fires accelerates global warming, which is occurring at an unprecedented pace as the result of human activity. It is not a matter of opinion but of scientific fact. As Robert M. Hazen, Executive Director of the Deep Carbon Observatory (among his other prestigious titles) based at the Geophysical Laboratory of Washington, DC’s Carnegie Institution succinctly puts it in his eminently readable new book “Symphony in C: Carbon and the Evolution of (Almost) Everything,” published in June, those who deny global warming are either “ignorant, greedy or both.”

So why aren’t more world leaders speaking out about the fires, volunteering to help Bolsonaro with aerial fire-fighting equipment, and boycotting the companies responsible for the purely greed-driven fires — especially now that Bolsonaro says Brazil “can’t afford” to extinguish the flames by itself?

Why, in our small country, where global warming is exacerbating the evaporation of our natural water resources and where our fertile land is threatened with climate-change-related desertification (in which fertile land becomes desert), is the subject so absent from the minds and speeches of all but a handful of our politicians?

Isn’t intervention now what is required of realpolitik?

And why, in our small country, where global warming is exacerbating the evaporation of our natural water resources and where our fertile land is threatened with climate-change-related desertification (in which fertile land becomes desert), is the subject so absent from the minds and speeches of all but a handful of our politicians?

It is time for all the politicians, so focused on short term gain, to begin to listen to the increasing grassroots clamor for action on climate change and, in Israel’s case, not only pass laws and introduce regulations but also implement them, according to stringent timetables.

To do so will be for the benefit of society long after their terms of office have ended.

The writer is The Times of Israel’s environment correspondent.