MOROCCO — “You are Jewish? Ahlan wa’ sahalan [hello and welcome], Morocco was yours before it became ours,” says Sayid, an elderly Moroccan whom I happened to meet while walking around the city of Tetouan in northern Morocco.

“The Jews came to North Africa before Islam was born,” Sayid explains. “So Moroccan Jews are an inseparable part of the history of Morocco.”

It is hard to remain indifferent to the respect and appreciation — if not outright admiration — that Jews receive in the streets of Morocco these days. More than 10,000 Israelis visit the country each year and are warmly welcomed.

In the various markets you can find Judaica items. And the government, for its part, is careful to commemorate Jewish personalities and institutions related to the history of the place. To wit, Morocco is the only Muslim country in the world that maintains a museum dedicated solely to the Jewish community that used to thrive here in the past.

Sayid and his friend sit on a streetside bench smoking kief, a mixture of tobacco and hashish, from a long wooden pipe.

“This pipe is called sebsi. This is how most Moroccans smoke their hashish,” says Sayid. “Usually the pipe is made of olive wood, but this pipe is made from apricot wood, which gives the smoker a slightly sweeter and more pleasant taste in the mouth.” 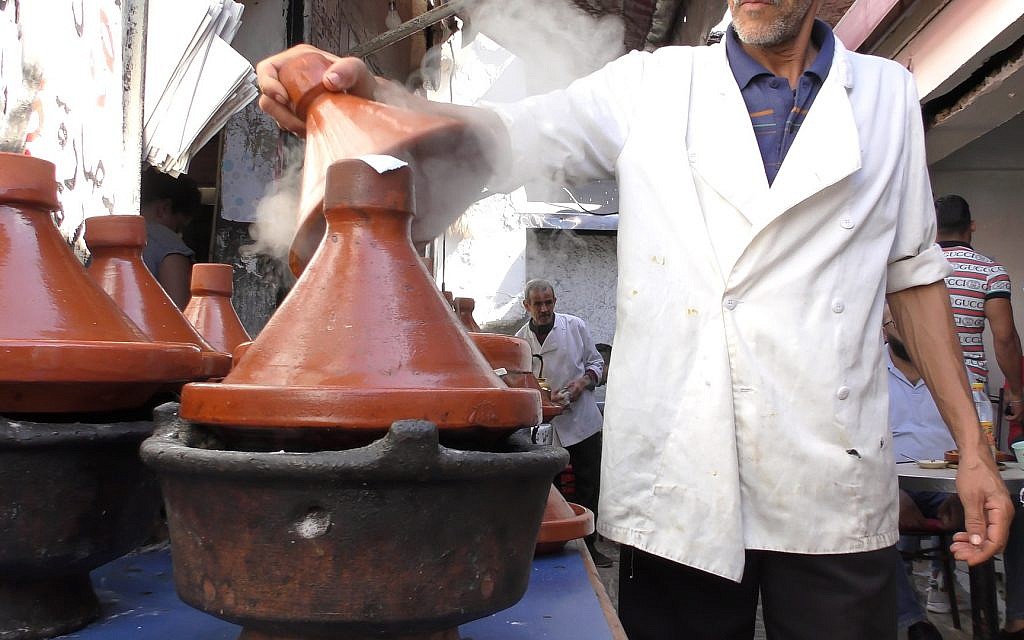 A traditional Moroccan tagine on the street. (Ziv Genesove/ Times of Israel)

Sayid leads me to a small shop belonging to a friend where he feels more comfortable preparing a nice “bowl” of sebsi, and hands me the pipe with the blessing, “Sacha wa’raha,” meaning “be healthy and rest well.” 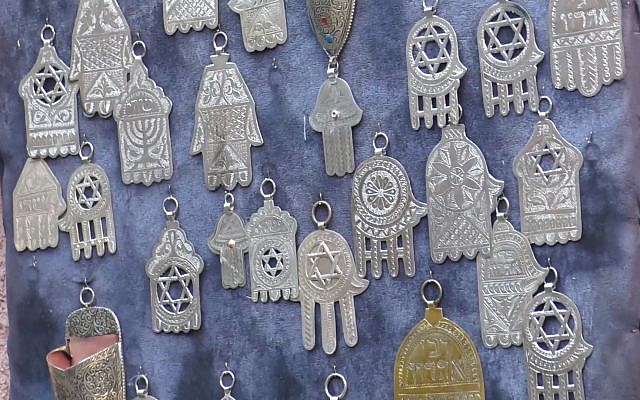 50,000 Moroccans with an arrest warrant on their heads

Despite the apparent openness and liberal attitude here regarding hashish, the fact that cannabis cultivation in Morocco is still considered a criminal offense is very disturbing to local farmers.

In fact, to date, there are almost 50,000 growers that have an arrest warrant hanging over their heads. As such, Moroccan farmers who grow cannabis on a commercial scale are very suspicious, and do not like Westerners coming to their territory with a camera.

I arranged with Francis, a French cannabis breeder with years of experience cooperating with the Moroccans, to take me to visit the cannabis plots of one of his partners near the village of Katma. The village is located in the Rif mountains, a beautiful mountain range in Morocco’s north where almost all of the country’s cannabis is grown.

After nearly three hours of driving in the mountains, we reach our destination: a huge, picturesque villa on the side of a mountain. 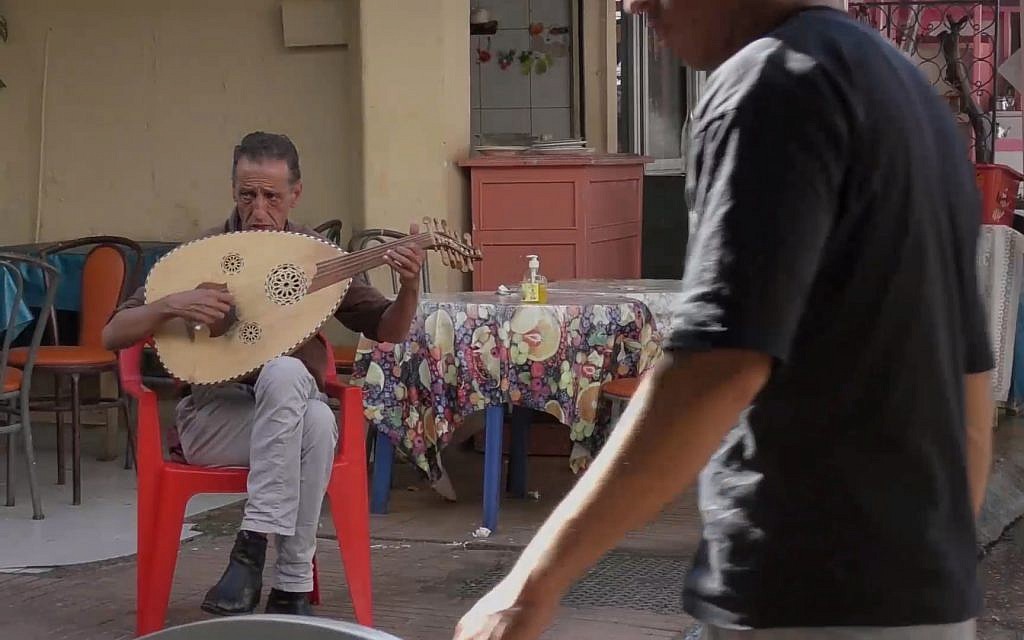 “This is the mansion of ‘Patron,'” Francis tells me (the owner’s name has been changed to protect his identity). “Here he hosts his friends or business partners.”

The villa is nearly empty except for a group of five Italians, a pair of Poles, four local workers who maintain the kitchen — and kilos of hashish on the table and hanging to dry in the air. I feel safe, but the atmosphere is quite shady.

A prisoner in his own palace

I meet Patron only the next morning as we finish a lavish breakfast and prepare to go out to the cannabis fields.

“Patron, this is the Israeli guy I wanted you to meet,” Francis says by way of introduction.

“Nice to meet you,” I say, holding out my hand.

Patron gives me a penetrating look. “You too,” he replies. “Let’s talk for a few minutes before you embark on your tour.”

One of the women serves us glasses of sweet mint tea. “You have a very beautiful property here,” I say, trying to break the ice.

“Thank you,” Patron answers. “But what is it worth if I have all this goodness and am in jail?”

Patron explains to me that he too has had an arrest warrant out on him for several years now. 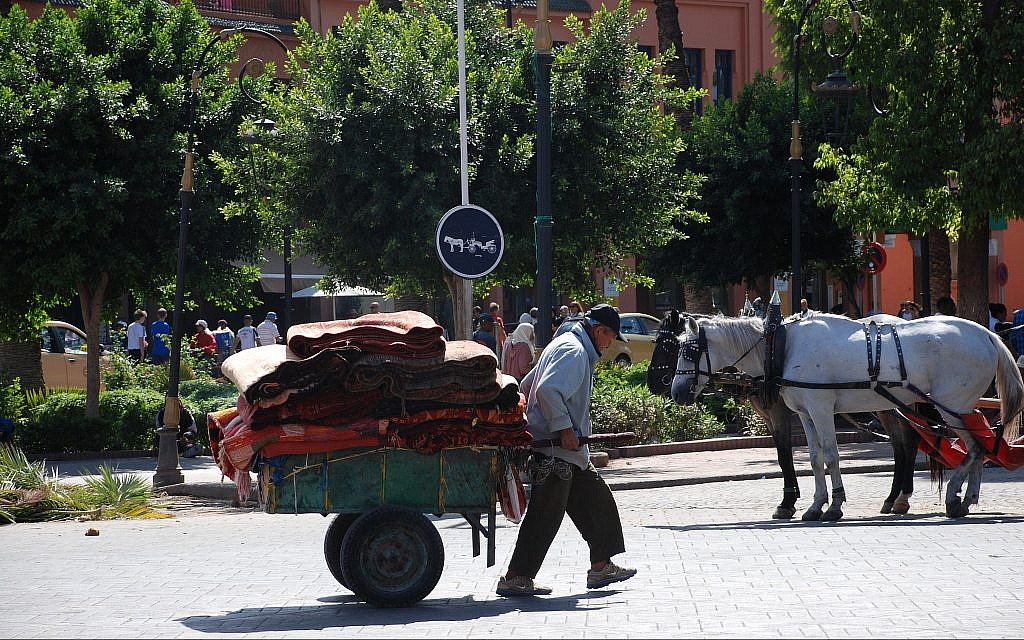 A man pulls a cart on the streets in Morocco. (Ziv Genesove/ Times of Israel)

“My bribery only allows me to travel around a limited area of several villages without being arrested,” he says. “If I have a family event in Casablanca or Marrakesh, for example, I have a problem.”

“Now listen,” Patron warns. “I’m sending you with Mahmoud, my wife’s brother. There is no way that you turn on the camera without getting permission from him. There are no 360-degree shots. You take only one direction at a time, understood?”

I say of course, and we are on our way.

‘The Jews were the best hash dealers in Morocco’

We travel between great green mountains and unpaved roads. A strong smell of cannabis rises in the air, while in the background I hear Francis and Mahmoud negotiating the price of the next batch of seeds that Francis will bring from Europe next month.

Until a few years ago, most of the local farmers would have grown Bildia, a local cannabis landrace acclimated to the region’s climate, but with a relatively small amount of resin production and low THC (tetrahydrocannabinol, cannabis’s main active psychoactive ingredient) content. This had kept hashish production relatively low, and the end product’s effects weak.

In recent years, Moroccans have imported more and more hybrid strains from Europe which are capable of producing much higher resin output and about five times more THC content. 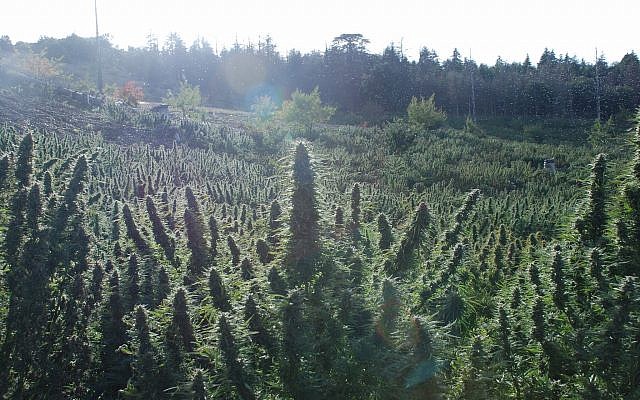 After about 15 minutes of a particularly bumpy ride, we stop the car at the foot of a small hill. On the other side, a small Garden of Eden awaits: A field full of ripe cannabis plants, at peak bloom and ready for harvest.

We light a joint and enjoy the stunning landscape that stands before us when Mahmoud suddenly turns to me and says, “You know, now that I think about it, my father once told me that the Jews were the best hash dealers in Morocco.” 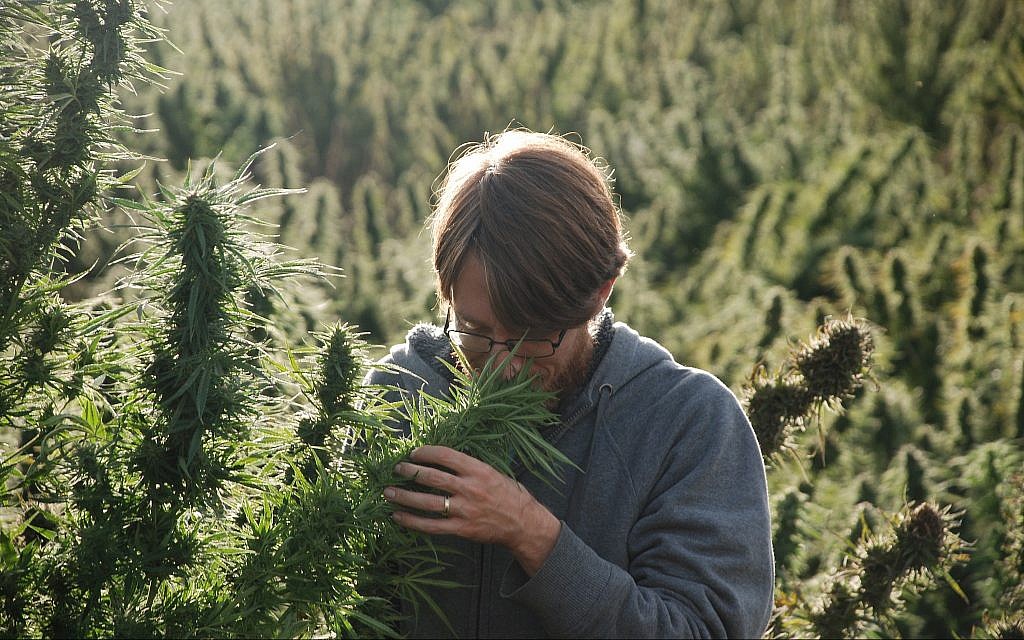 The Berbers grow, the Jews sell

This piece of information ignites my imagination, but Mahmud can’t give me many details on the Jews’ share of the hashish scene in Morocco — nor can any of the locals I try to ask. Luckily, upon my return to Israel I meet Dr. Doron Danino, an expert on Moroccan Jewry, who knows exactly what Mahmoud was talking about.

“The Jews in general did not grew cannabis,” explains Danino. “But they received a monopoly from the king for the sale of tobacco in Morocco, and that included sales of the cannabis plant and the hashish produced from it.”

According to Danino, the Berber farmers in the Rif Mountains were skilled agriculturalists, but most were illiterate and mainly spoke the Amazigh (Berber) language, which until relatively recently had no writing system.

Following the Muslim conquest of the Maghreb in the early 8th century, most city-dwellers spoke Arabic, so communication with the isolated Berber community was sometimes difficult.

“But Jews used to speak several languages, and they had a business sense, which made it a mutually beneficial partnership,” Danino says. 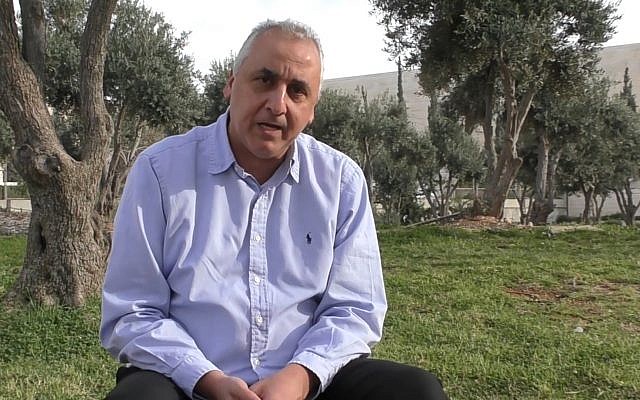 A neighborly feud: On hash and mice

Today, unfortunately, very little documentation remains that can further illuminate details of the Jewish hash trade in Morocco. But a close examination of religious texts written by local community rabbis during the 18th and 19th centuries reveals fascinating information about the involvement of Jews in Morocco’s hashish scene.

Written in the 18th century and printed in Jerusalem in the 1930s, the book “Avnei Shayish” by the chief rabbi of Sefrou, Rabbi Shaul Abitbul, details the annual licensing fee Jewish hashish merchants were forced to pay the king each year — 24,000 Spanish rials.

And though a number of religious sources from the time reference issues related to hashish, none mention any prohibition on the consumption, or even trade, in the substance.

There is, for example, an amusing description of a conflict between neighbors that developed as a result of a hash selling business in the book “Shofriya DeYakov,” written by the sage Yaakov Bardugo, head of the rabbinical court of Meknes 200 years ago.

The text describes how neighbors wanted a local Jewish merchant to stop using his apartment as a base for his tobacco and hashish selling business. 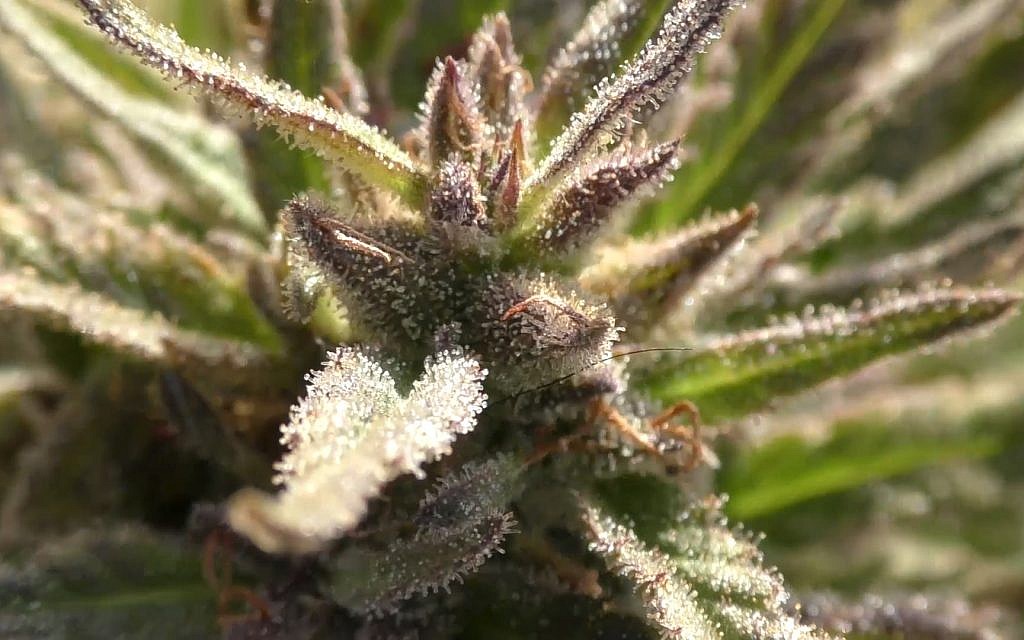 According to the text, “The owners of the [other] houses stood up and sued him… because the ceilings and walls were being ruined by straying of the mice that are found a lot in places where wheat and other crops are stored.”

Unfortunately, mice are just one of their problems.

“All the owners of the houses also claimed that [the merchant] could not use any apartment or yard to accommodate the tobacco and kief,” the text continues, “because of the smell that emanates from it and harms the babies, and also to the adults who are not used to it.”

But it turns out that the biggest problem for the neighbors is not the mice or the stench — but rather the ill-mannered customers who come, taste the merchandise, and get the munchies.

“And apart from the multitude of those who enter and leave their yard, this is also a great damage when [the customers] go crazy on the local residents, especially the women and the children… since all of the customers of this business are strong and aggressors, and they are always crazy and confused and drunk. And they ask for bread, or compote, and coal to burn, and no one can tell them anything.”

Clearly the Jews of Morocco knew how to make money from the hash trade. The question remains, however, whether they consumed it recreationally themselves.

The couscous with a thousand spices

Moroccan Jews were probably not heavy hash smokers, but according to Raphael Attias of the Center for North African Jewry, there were special events in which cannabis was used. 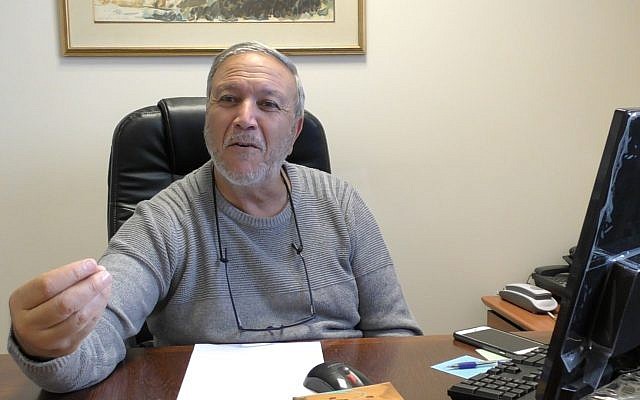 Raphael Attias of the Center for North African Jewry. (Courtesy)

Family or communal celebrations such as weddings or bar mitzvahs often began on the evening prior to the event, where the groups would eat, drink and revel. Often, they served shakshuk dal-ashub — a famous couscous dish containing hashish — to help them get into the mood before the big day.

“Shakshuk dal-ashub is couscous which is prepared with ‘a thousand’ spices,” explains Danino. “Now there are certain places in northern Morocco, especially around the Rif, where other spices that were common in the area were also added to this dish.”

“The story is familiar,” Danino says. “They would have women’s evenings, especially the henna ceremony before a wedding, where the women would go to the mikvah [ritual bath] and arrange a ‘women’s party.’ And at that party they would also prepare the shakshuk dal-ashub and put inside things that would make them happier.”