LOS ANGELES — What proud Jewish grandfather doesn’t want Academy Award eligibility for his grandchild’s first feature-length documentary? It doesn’t hurt that the grandpa in question — Henri Dauman, an 87-year-old Holocaust survivor and esteemed photojournalist — is the subject of the film.

“If their film gets exhibited in movie theaters in New York and LA for two weeks before December 15 this year, it will qualify for a Best Documentary Oscar,” Dauman said on the opening night of a star-studded exhibition of his photography at KP Projects Gallery in Los Angeles on February 29.

Three weeks later, California Gov. Gavin Newsom shuttered non-essential businesses in a statewide effort to contain the coronavirus outbreak. The shutdown forced an early closure of Dauman’s gallery exhibit (which can still be seen online). Now sequestered in his New York City apartment with his wife Odiana, his aspirations for his granddaughter’s documentary remain undiminished.

“It’s a good time to promote the film, because a lot of people have time on their hands,” Dauman told The Times of Israel in a telephone interview.

From teen cinephile to international photojournalist

Dauman survived his lonely teen years in post-World War II Paris by escaping into movie theaters to watch American films. The interplay of light and shadows on the big screen inspired him to pick up a camera and pursue visual storytelling through photography.

His lucky break came when an uncle who immigrated to New York before WWII sponsored then 17-year-old Dauman to come to the United States. After arriving in New York in 1950, Dauman worked nonstop to build his portfolio. He listened to the news to ensure he’d be at the right place at the right time to capture the perfect photograph. By his mid-20s, Dauman landed a lucrative position at Life magazine. 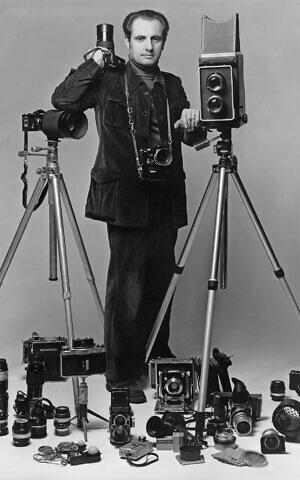 Over four decades, from the 1950s through the 1980s, Dauman captured the essence of American culture, from glamorous celebrities including Marilyn Monroe, Frank Sinatra and Jane Fonda, to turbulent social movements such as black power and women’s liberation. He photographed comedic moments like the Marx Brothers clowning around, to tragic scenes such as a veiled Jacqueline Kennedy walking behind her husband’s casket.

His childhood traumas infused him with the compassion to connect with his subjects on an intimate level.

“What makes a good photo is telling the story inside someone’s head. I strive to be sensitive to the subject and create magic by capturing meaningful, emotional moments,” Dauman said.

His portraits of Elvis Presley reveal the pioneer rock-and-roll heartthrob as a vulnerable young man. Dauman took these emotive photos after he and Presley shared their experiences of losing their mothers as children.

Dauman also kept an eye to the future as a hands-on family man. He played an influential role in his children and grandchildren’s lives, pushing them to achieve. 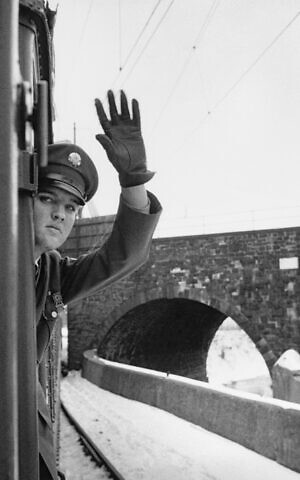 Elvis Presley on the train to Memphis, 1960. (©Henri Dauman/ daumanpictures.com All rights reserved)

Granddaughter Suerez spent summers with her grandparents in New York to escape the searing heat of her native Arizona. Yet she grew up knowing little about her grandfather’s childhood or prolific career as a photojournalist.

“He never viewed his photographs as art. They lived in double-paged magazine features, not galleries,” Suerez said in a joint phone interview with her fiancé Jones.

Her perception of her grandfather changed in 2014, when she, Jones and the extended Dauman family attended the debut exhibition of his most celebrated photographs in Paris. The 200-plus photos on display demonstrated Dauman’s artistry and arresting cinematic use of backlighting.

“When I saw the exhibit, I thought these are incredible — how did he take all these photos? I live and breathe French film and couldn’t believe he photographed Truffaut and Jeanne Moreau. I geeked out,” said Jones, a University of Colorado cinema school graduate.

My grandfather, the Holocaust survivor?!

A few months after the Paris exhibition, Suerez went on a Birthright trip to Israel. When her group visited Yad Vashem, Israel’s Holocaust museum, she searched for her great-grandfather Charles Dauman’s name in the archives. She knew Charles died at Auschwitz and hoped to learn more about him. 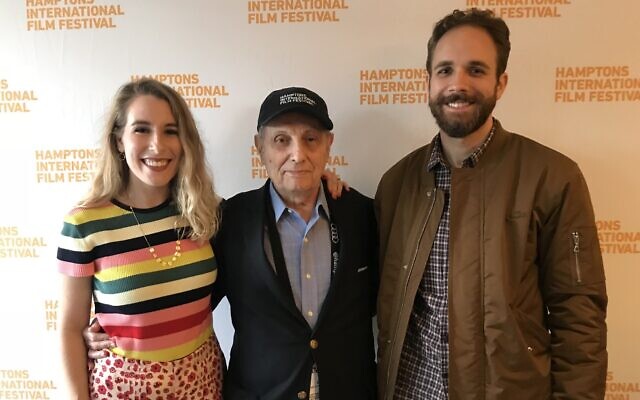 What popped up on the screen shocked her — a 1996 video of her grandfather Henri’s Shoah Foundation testimony describing his early years in Nazi-occupied France, including being strafed by Nazi fighter pilots.

“I was overwhelmed. I’d always known my grandpa as a perpetual optimist. I had no idea how his tragic childhood unfolded,” Suerez said.

Dauman was unaware that the Shoah Foundation digitized and archived his testimony for the world to see. He believed he had the only VHS copy and intended for his children to view it after he died. 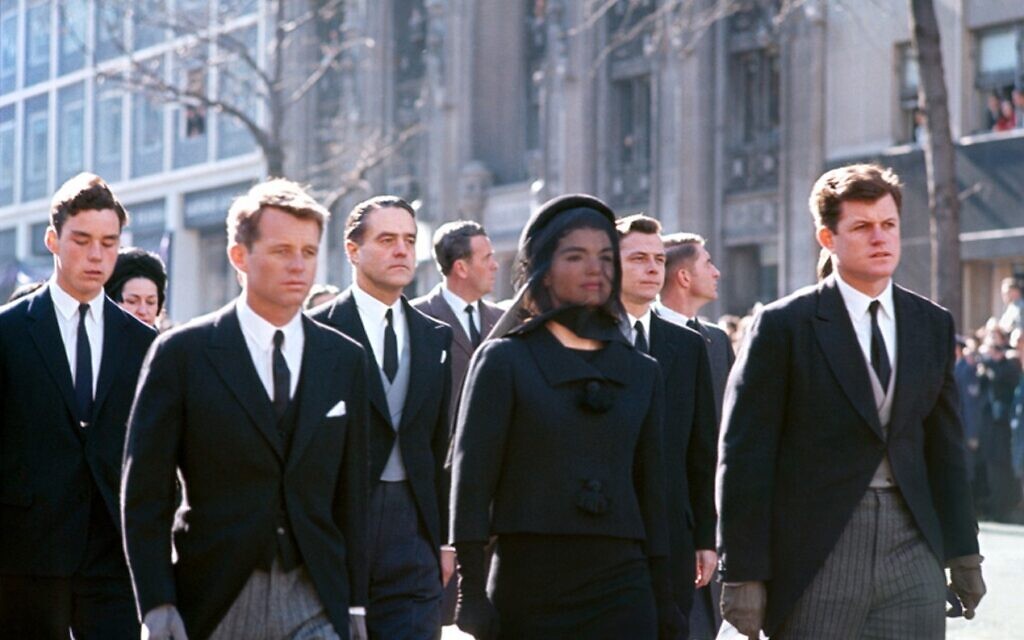 “I never spoke about it because the memories were too painful and I didn’t want to burden my children with stuff they would carry over their shoulders,” Dauman explained.

As she watched the video at Yad Vashem, Suerez felt compelled to share her grandfather’s story. “I thought the goals he expressed about surviving and always moving forward would affect people the same way they affected me,” she said.

She set out to produce a movie with her filmmaker boyfriend Jones — an ambitious goal for a 22-year-old who’d just graduated from the University of Arizona with a Bachelor of Fine Arts degree in Technology and Design. 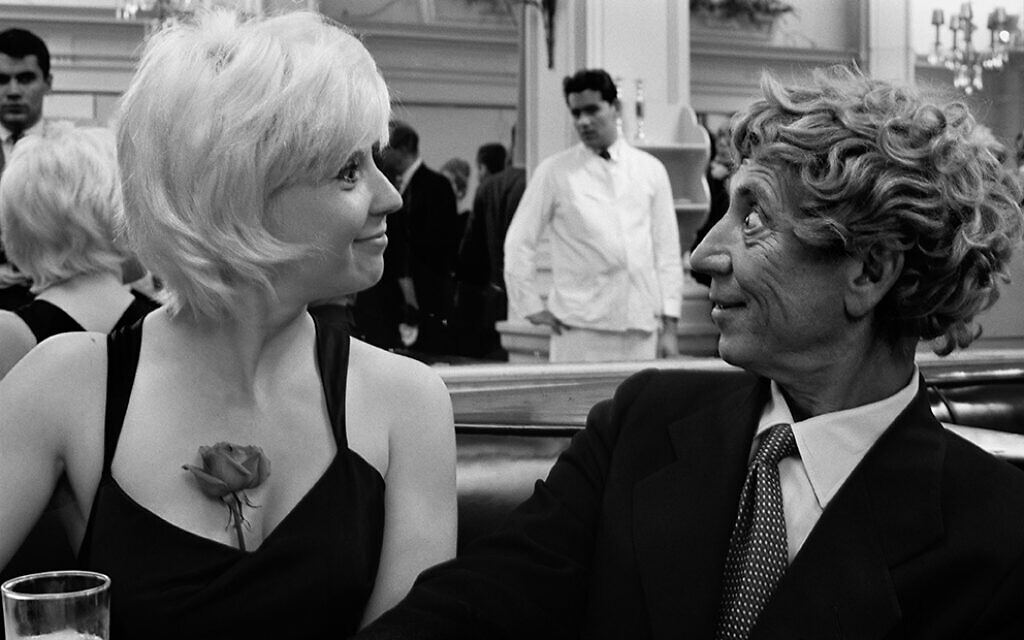 First, she had to convince her grandfather to cooperate. Dauman was reluctant. “I’d rather look forward to the future than back to the past and cry,” he told her.

Suerez understood Dauman’s desire to distance himself from the past. But she believed his story of suffering and resilience could educate her generation about the Holocaust and inspire young immigrants to believe they too could achieve the American dream.

Her passionate resolve moved her grandfather to open up about his childhood. He came to recognize the importance of creating a personal historical record of how devastating war and discrimination can be, particularly to children. 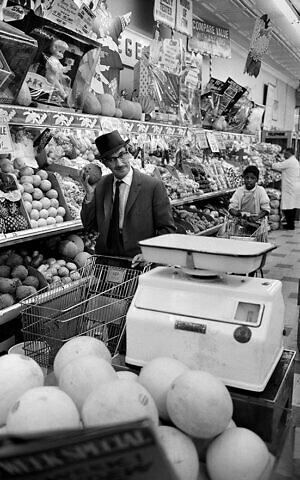 “Since I did the film, discrimination and anti-Semitism have again grown their ugly faces. The film comes at just the right time because I was a witness to real horror,” Dauman said.

To make their vision a reality, Suerez and Jones launched a successful Kickstarter campaign to raise $50,000 in seed money. They offered autographed prints of Dauman’s most famous photos as rewards to big donors. The money enabled the young filmmakers to produce a “sizzle reel,” a promotional video to pitch the project to potential investors. Over the course of five years, they raised $200,000 — just enough to complete their documentary.

The film debuted in 2018 at the Hamptons International Film Festival and has been screened at several other festivals including the 2020 San Diego Jewish Film Festival, where it moved audiences to tears. In late 2019, the couple scored a distribution deal with Samuel Goldwyn Films who opted out of releasing it theatrically, much to Dauman’s initial frustration. On March 6, “Henri Dauman: Looking Up” became available on demand through iTunes, Amazon, Google Play, Vudu and Fandango Now.

Locked down? Open up to… Henri Dauman

Suerez and Jones see a silver lining to the film’s direct-to-consumer distribution at a time when people the world over are sheltering in place at home.

“Our Henri Dauman film is open for business. It would’ve stunk if we released it in theaters only to have them shut down,” Jones said. 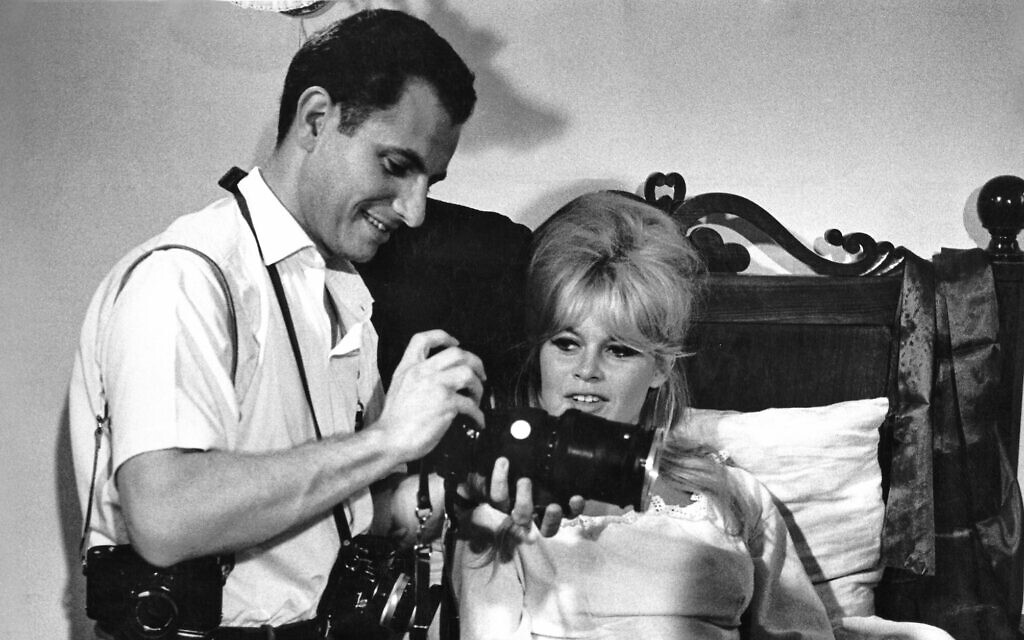 Henri Dauman with Brigitte Bardot on the 1961 set of ‘A Very Private Affair.’ (©Henri Dauman/ daumanpictures.com All rights reserved)

Suerez sees another upside to the timing of the film’s release. “When I was complaining about having to stay inside, I thought about Henri’s story and realized what we’re going through is not so hard. The film gives people greater perspective,” she said.

Dauman agrees. “Back then, I couldn’t make a noise for fear of being captured. Now we can watch TV and have food to eat,” he said.

Dauman hopes the film will inspire young people to see better times ahead — if he succeeded, so can they.

Dauman calls Suerez and Jones frequently to ask what they are doing to promote the film. “The darker things get, the harder Henri works. He’s coming up with ideas for slogans, ads and visual graphics. He still runs at 100 miles per hour and gets upset when we’re not pushing the film,” Jones said. 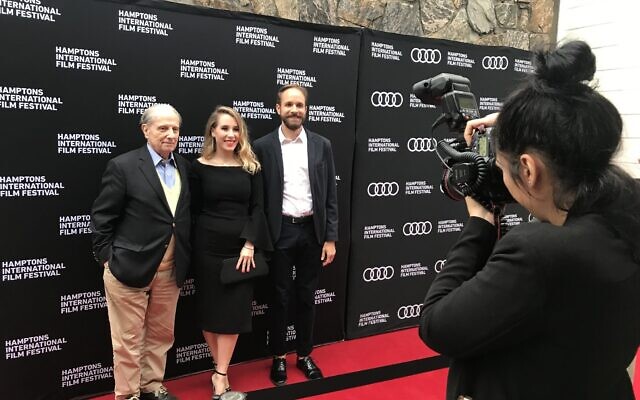 Henri Dauman, Nicole Suerez, and Peter Kenneth Jones at the 2018 premiere of ‘Henri Dauman: Looking Up’ at the Hamptons International Film Festival. (Courtesy)

Now that Jones and Suerez, like most of their film industry colleagues, are “very unemployed,” they have more time to promote their film. “We’re doing the best we can with marketing. We’re like a small time band going from town to town in a virtual social-media van. We’re doing it ourselves and embracing it,” Jones said.

Suerez appreciates the promotional work — it keeps the couple occupied while they have so much unstructured time on their hands.

While she thinks it’s great Henri hopes the film will be Academy Award-eligible, she has her reservations. “Who knows? It’s so hard to predict what the Academy is going to do this year amidst all the COVID chaos in Hollywood,” Suerez said.

Marilyn Monroe and Arthur Miller at a private showing of ‘Some Like it Hot’ in 1959. (©Henri Dauman/ daumanpictures.com All rights reserved)

In lighter times, at the February KP Gallery exhibition (also titled “Henri Dauman: Looking Up”), Dauman’s eyes sparkled as he acknowledged the newfound reverence his photography and life story inspire. He gestured around the room at his iconic photos and said, “Sure, these are nice, but my greatest achievement is the family I built from the ashes of war.”

Now that Suerez and Jones have launched their documentary into the wider world, they may even have time to plan a post-pandemic wedding. Meanwhile, Dauman has ambitious future plans in mind.

“Henri never considered his life story anything to scream home about. But when he saw the audience reaction and how his story affected people, he started pushing for more. He’s been asking me how we can raise a few million to get a feature-film studio production made based on his life,” Jones said.

By following Dauman’s example, Suerez and Jones preserved his legacy. They captured his positivity, humanity, empathy, creative energy and ability to transform darkness into light on film.

“Making this documentary and spending time with my grandfather was such a gift. I wouldn’t trade capturing his stories to pass to future generations for any other opportunity,” Suerez said. 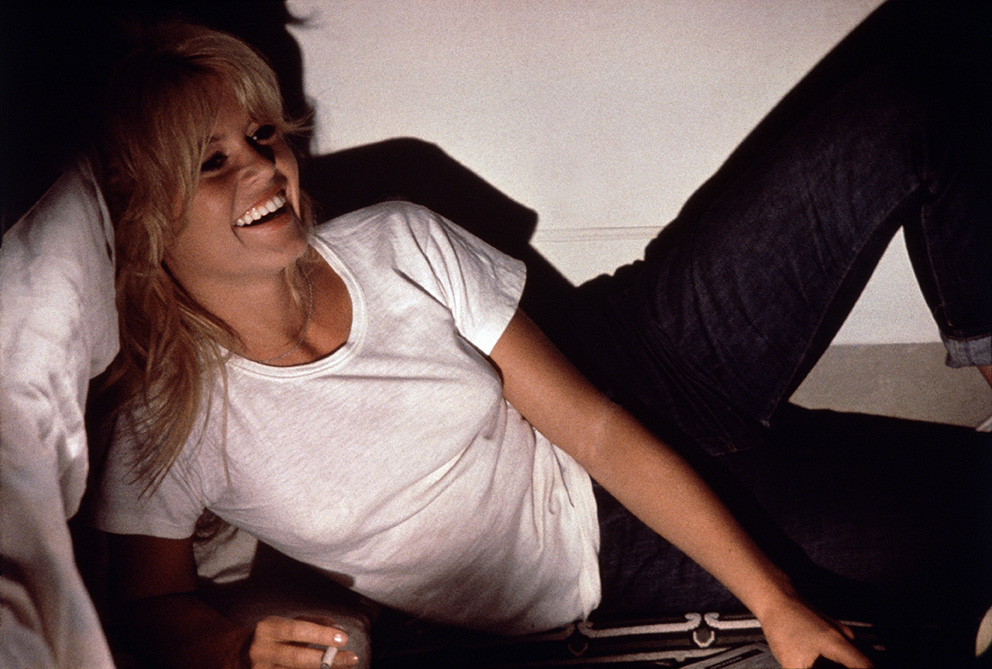